Getting in a gravel fix

Holiday nearly over and a new tyre on the V-Strom meant that I had to try to get in a gravel ride to finish the my time-off nicely.

Last night I poked around in Mapsource checking out a road that I had ridden past a few times and done the old "wonder where that goes" thing and low and behold it looked like it went somewhere rather than dead-ending.  Well, at least that's what Mapsource reckoned - for all I knew it could still be a paper road or an error in the mapping software - I am starting to have a few doubts about GPS maps...

Anyway, it was worth a crack so I created a route that also took in some other favourite roads and loaded it onto the Zumo.  This morning I got up early (6:30 on a Saturday!), walked the dog and was on the road by about 8:40.

As I was heading out of town towards the Pahiatua Track I decided to take in Tararua Road and then wondered if I could hit my first bit of gravel before 9am...Well, close enough, I was on the gravel at about nine and starting to get the feel of the new front tyre.

In Pahiatua I stopped to fill up the bike as I was disappearing into the wops for quite a while and knew I was going to need that fuel if I wanted to get back to civilisation without a walk.  I then looped over onto Pahiatua-Pongaroa Road and made for the Makuri Gorge.  I'd nearly forgotten that this road had been damaged enough to be closed after the earthquake but signs of road slumping and repairs were still evident as I made my way to the Pori Road turn-off.

Pori Road is always fun, it starts off sealed and climbs it's way up a hill before finally turning to gravel.  The gravel was actually in great nick and I had a great little ride to the usual picture taking spot. 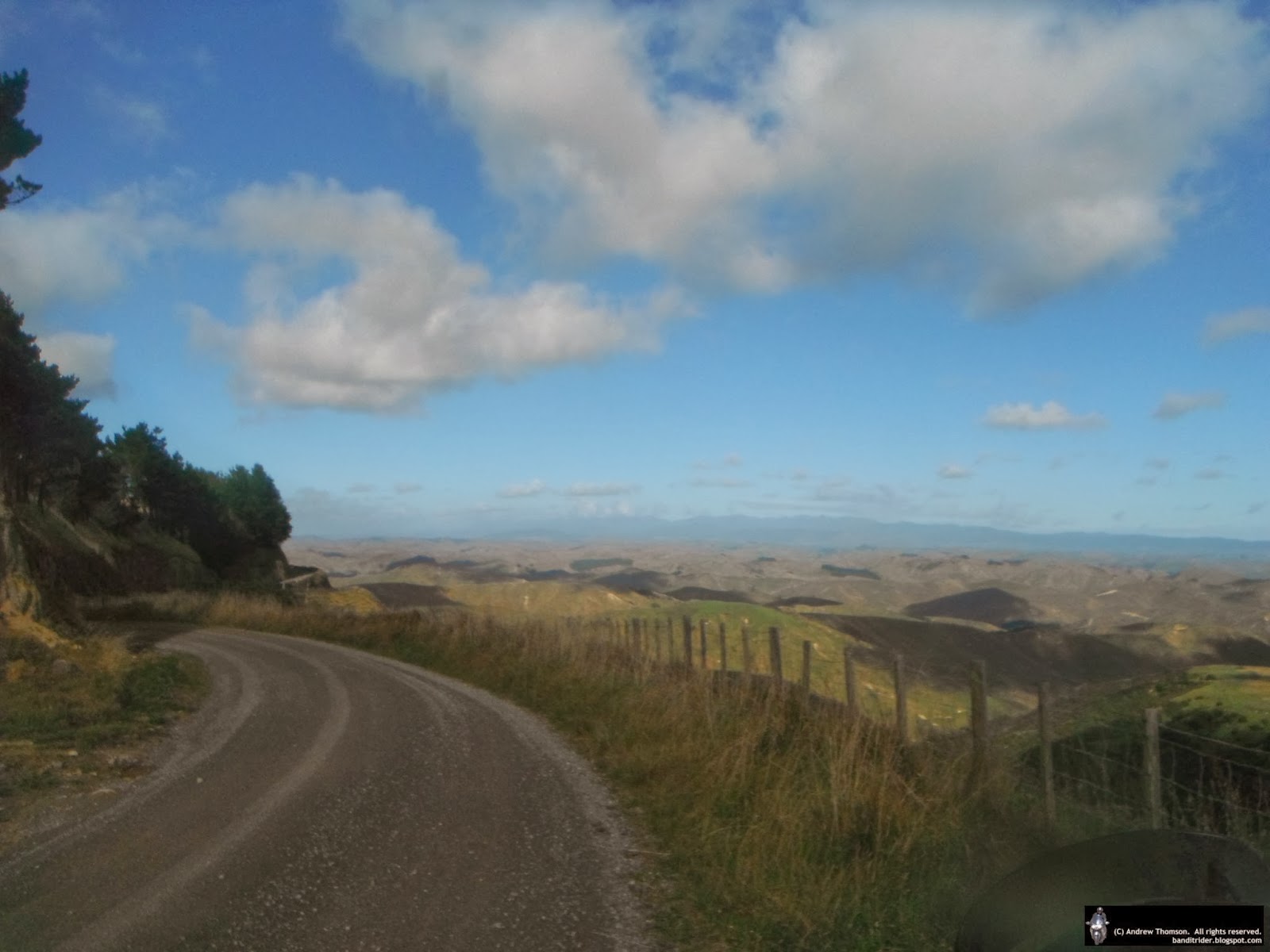 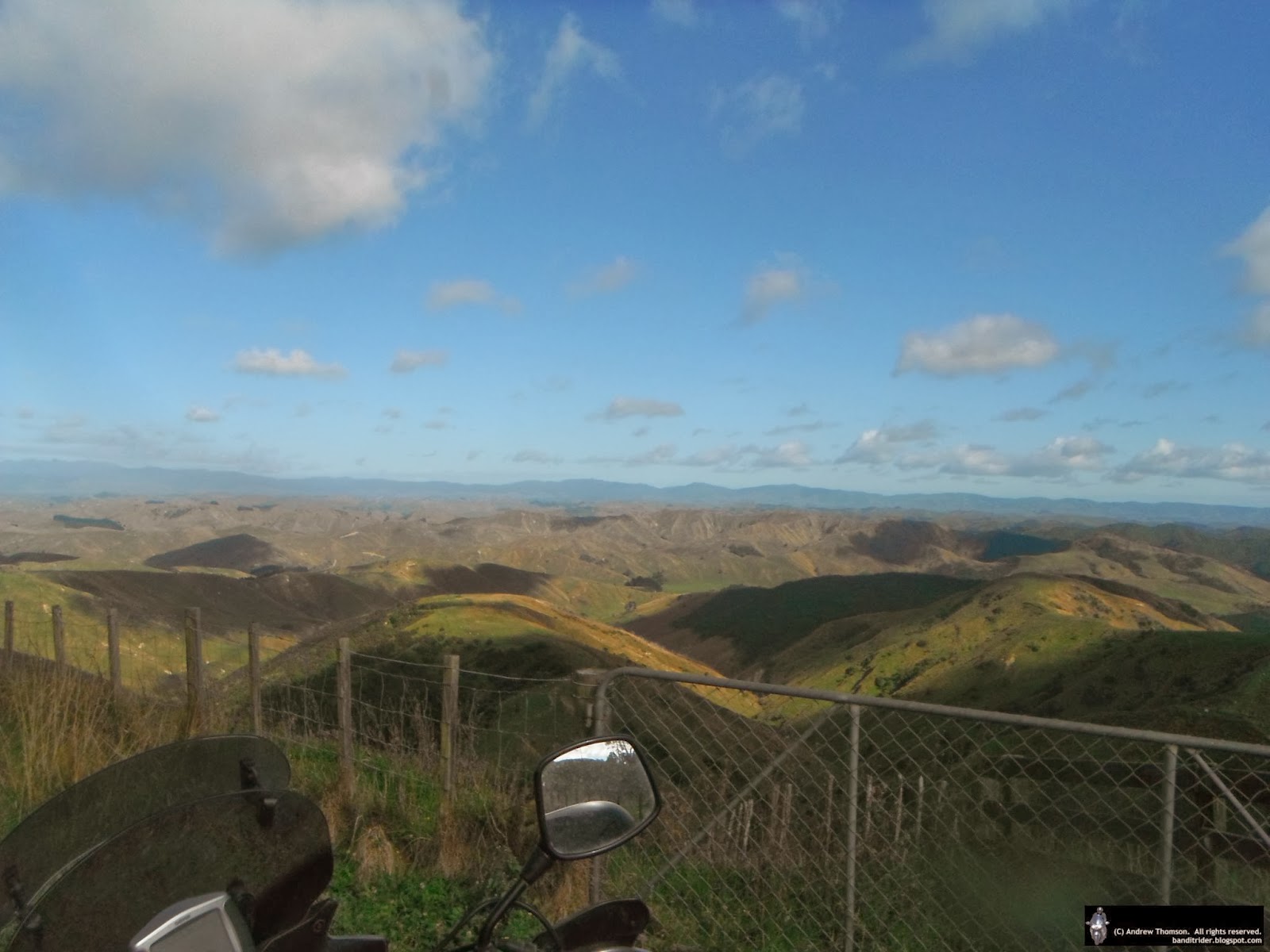 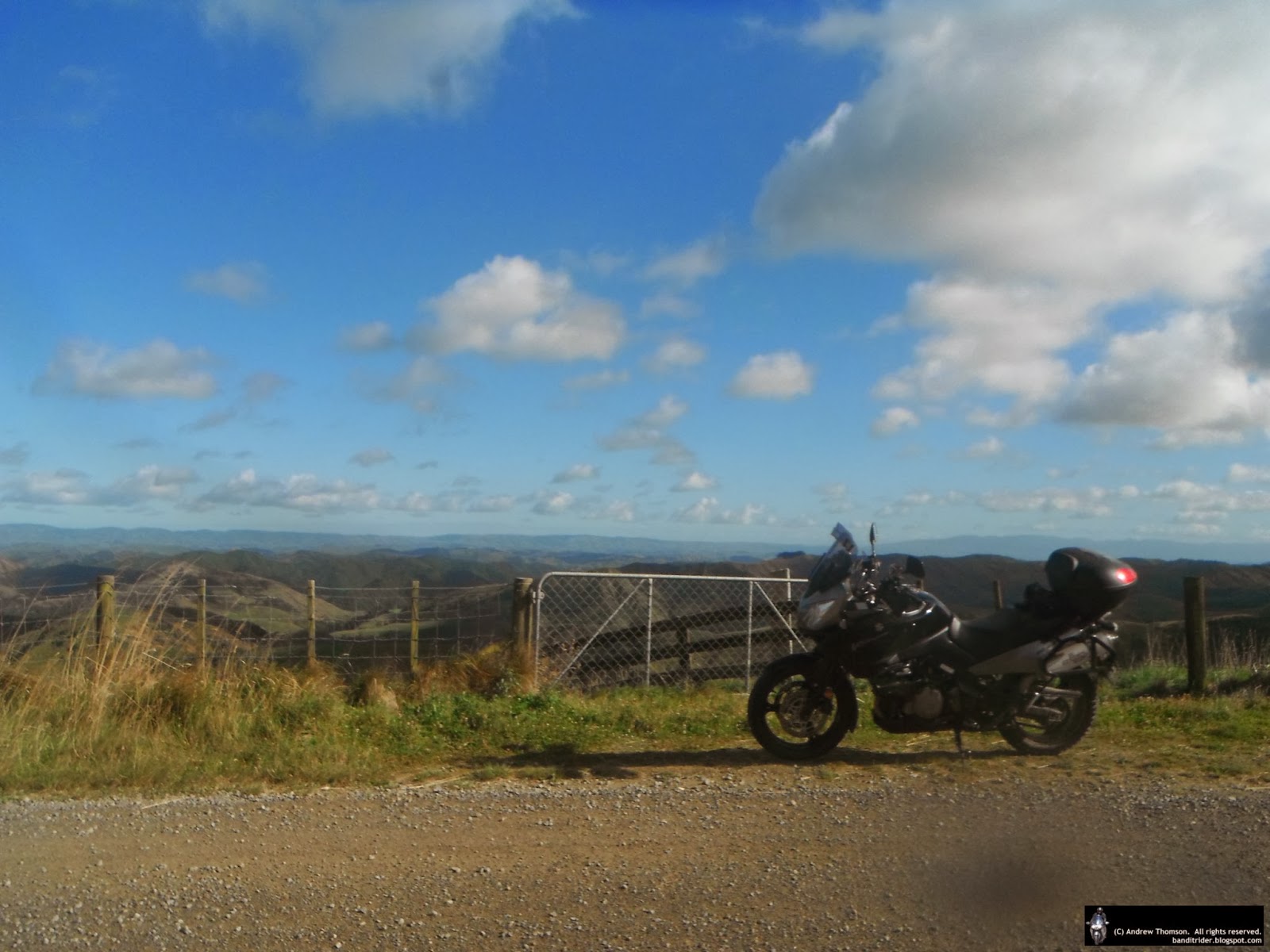 Pori Road eventually peters out and deposits you on Route 52.  Here I turned towards Pongaroa but after about 20km made a turn towards the coast onto Waihoki Valley Road.  This bit was nice and fast gravel and ends at the intersection with Huia Road. 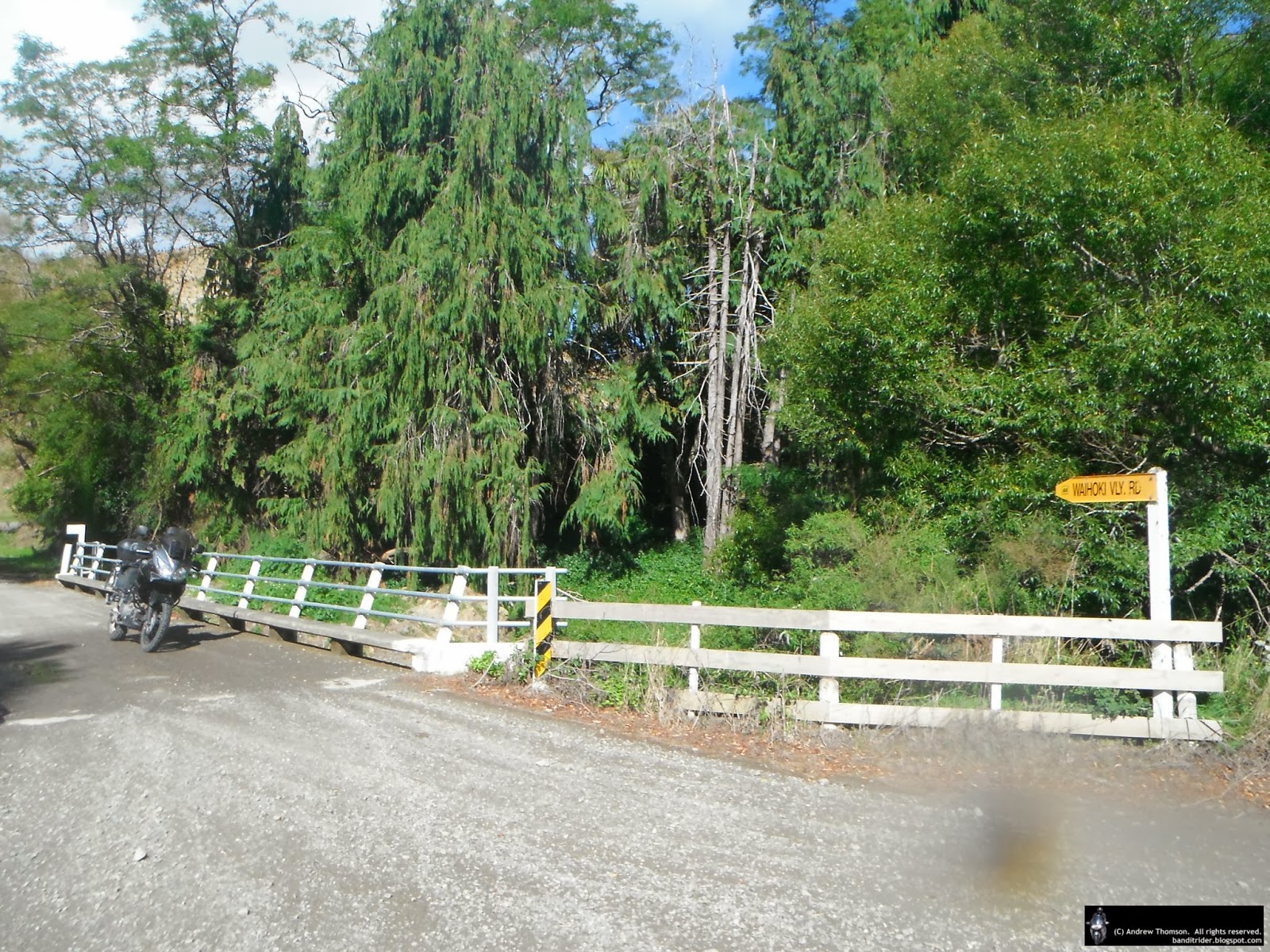 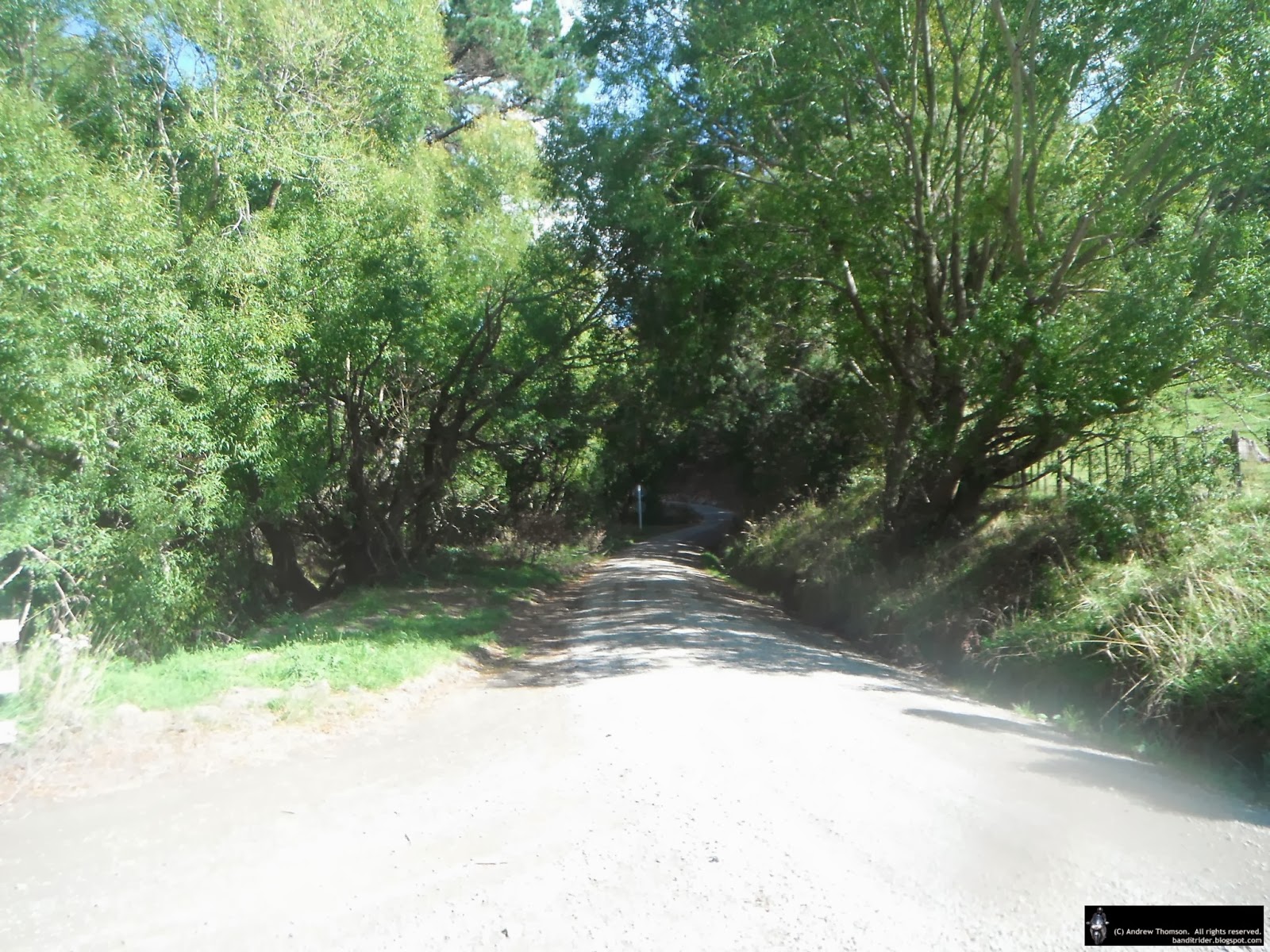 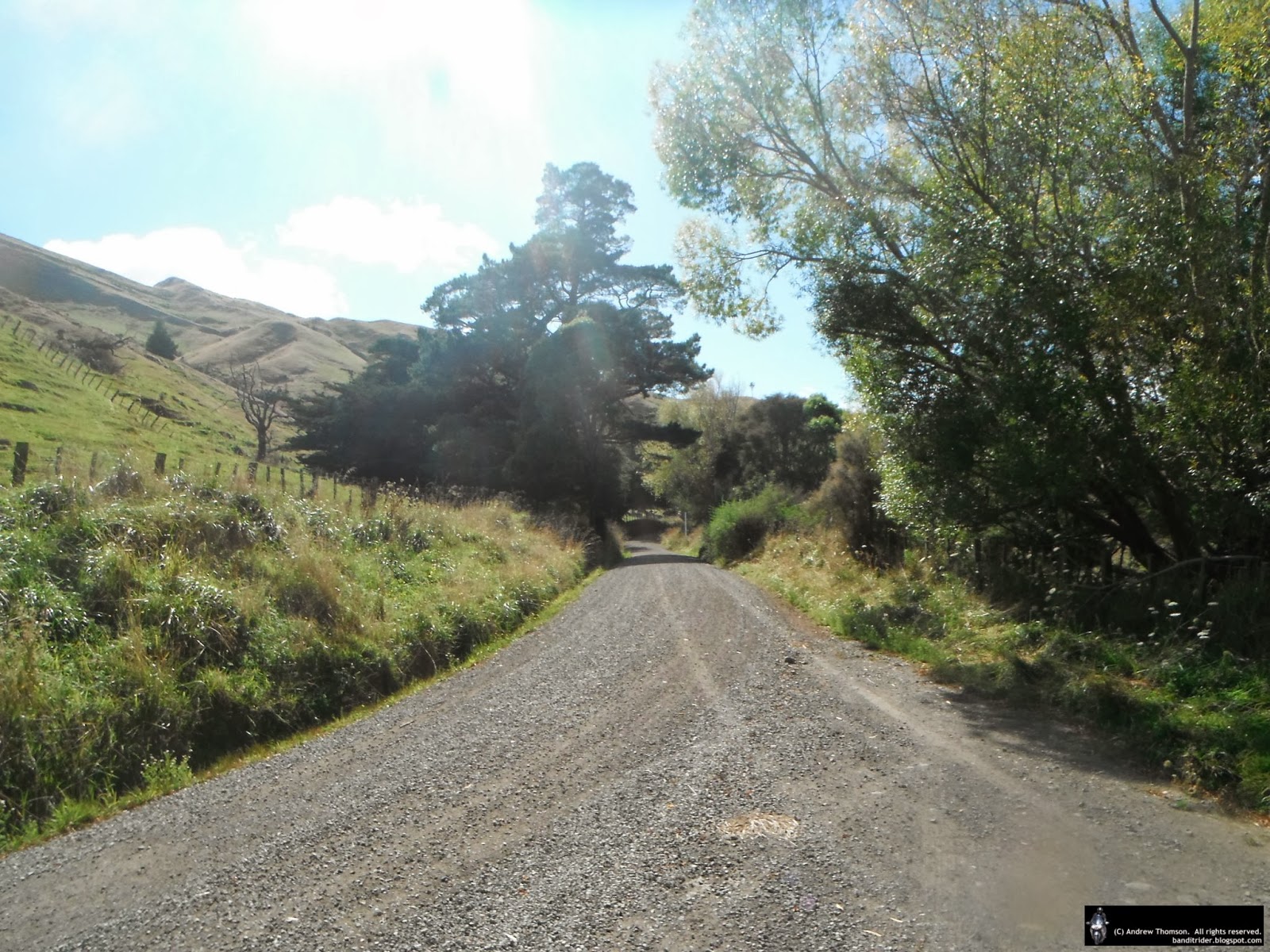 Huia Road is pretty much just more of the same - good gravel through nice farming country.  At the intersection where Huia Road becomes Waiowaka Road I took a sharp left up a hill onto Spur Road.  This bit of road is a bit tighter in places and can be a bit slippery in the winter but today it was in good nick and offered some great views for photo ops. 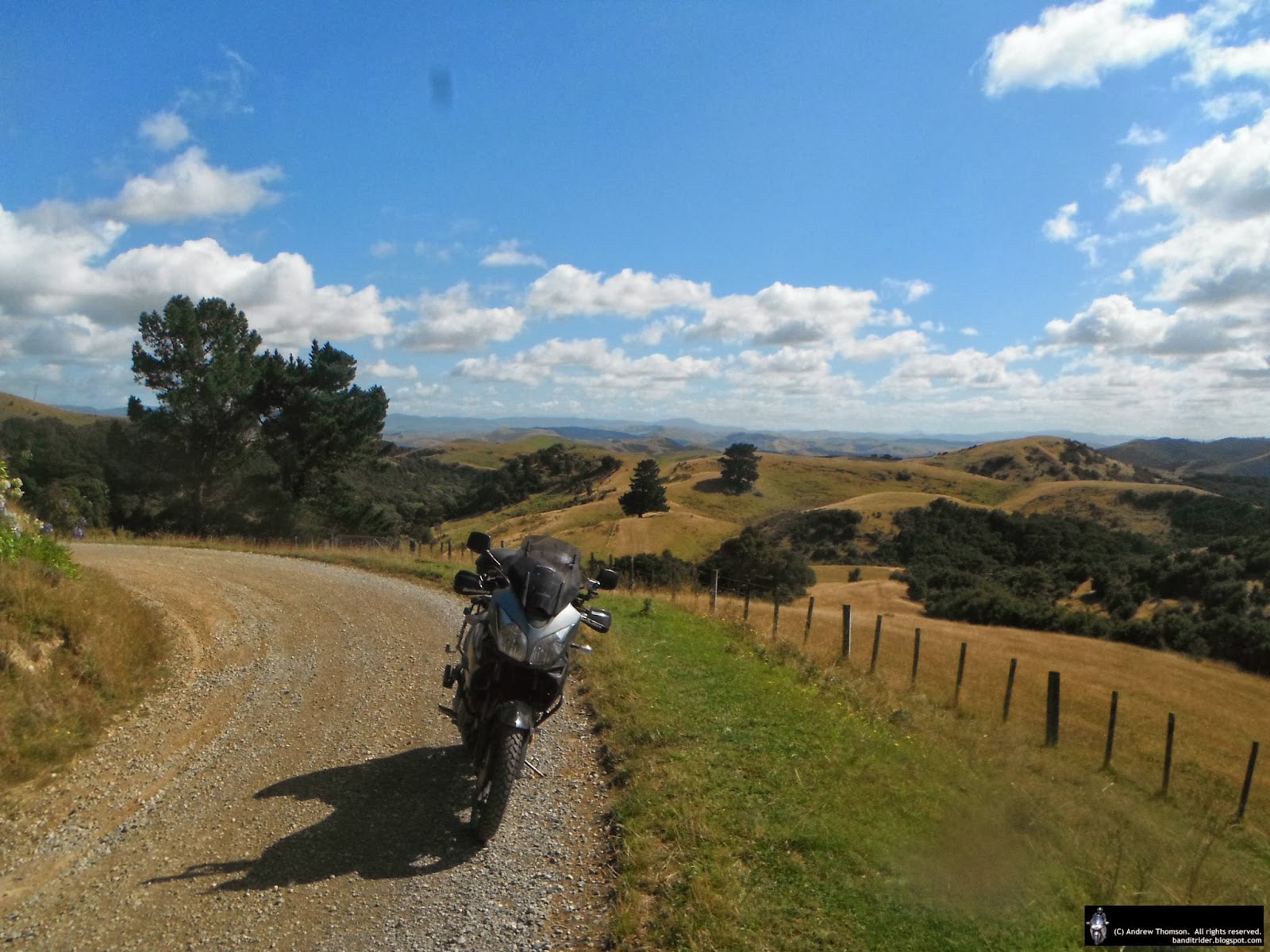 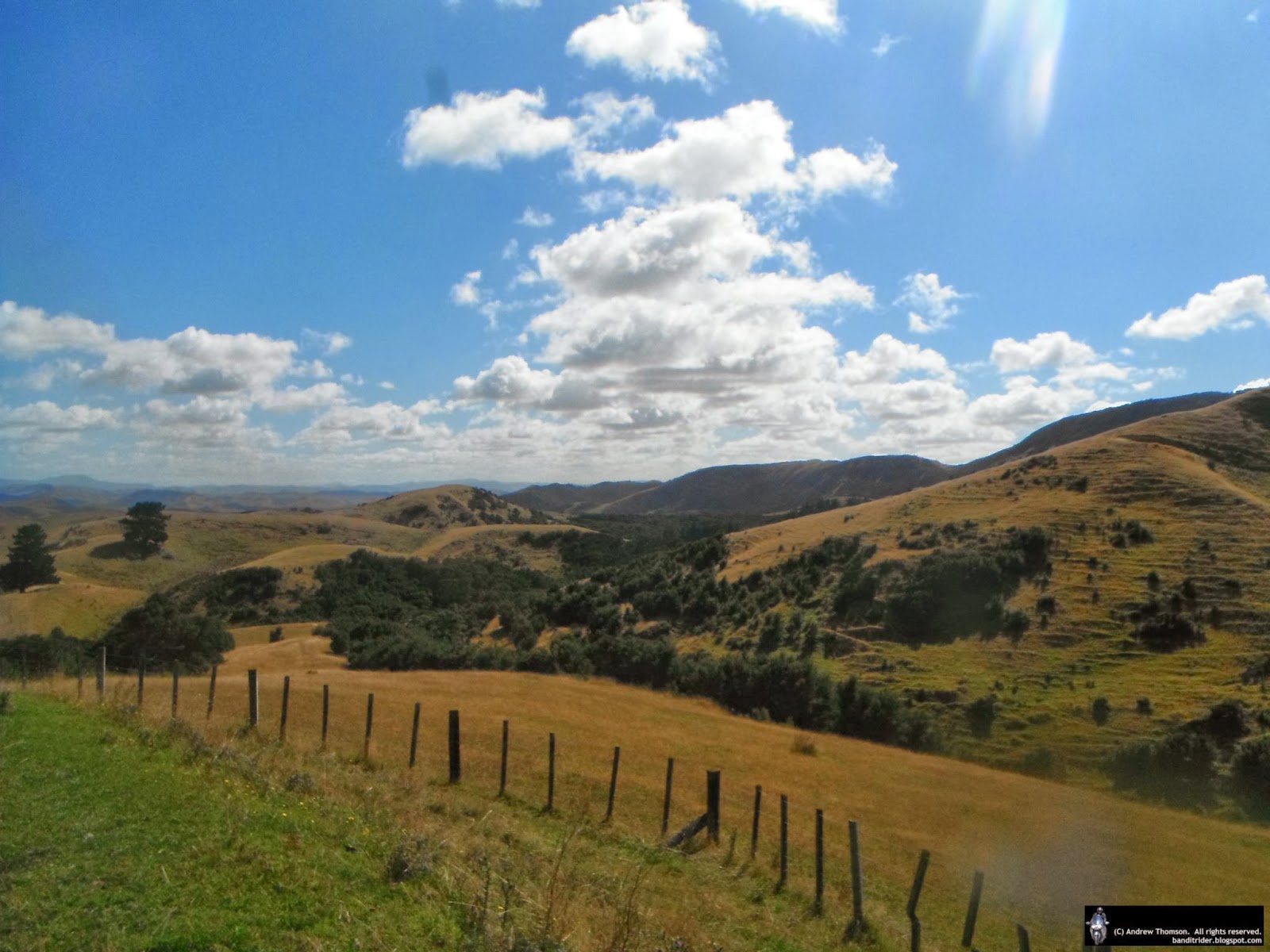 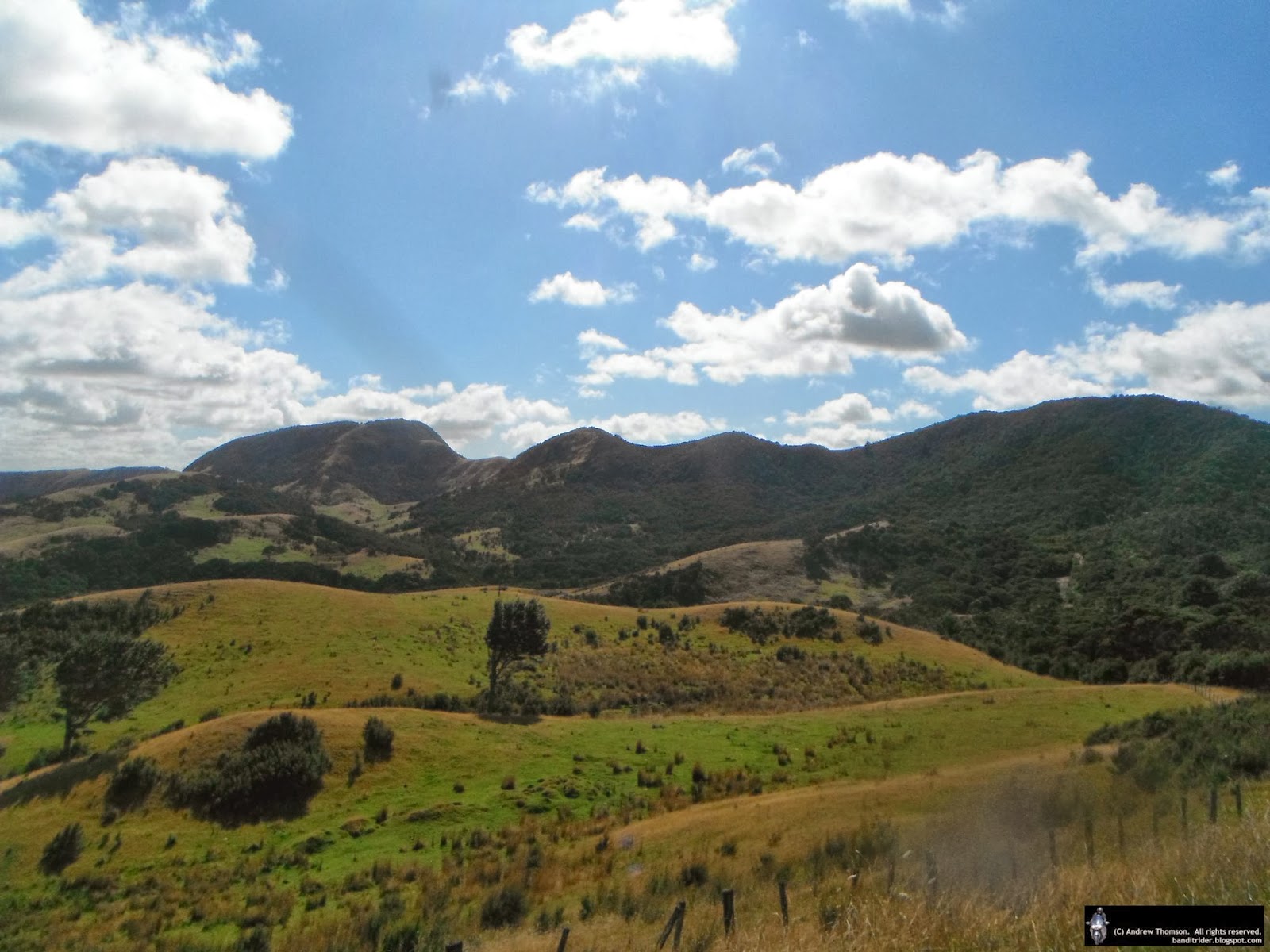 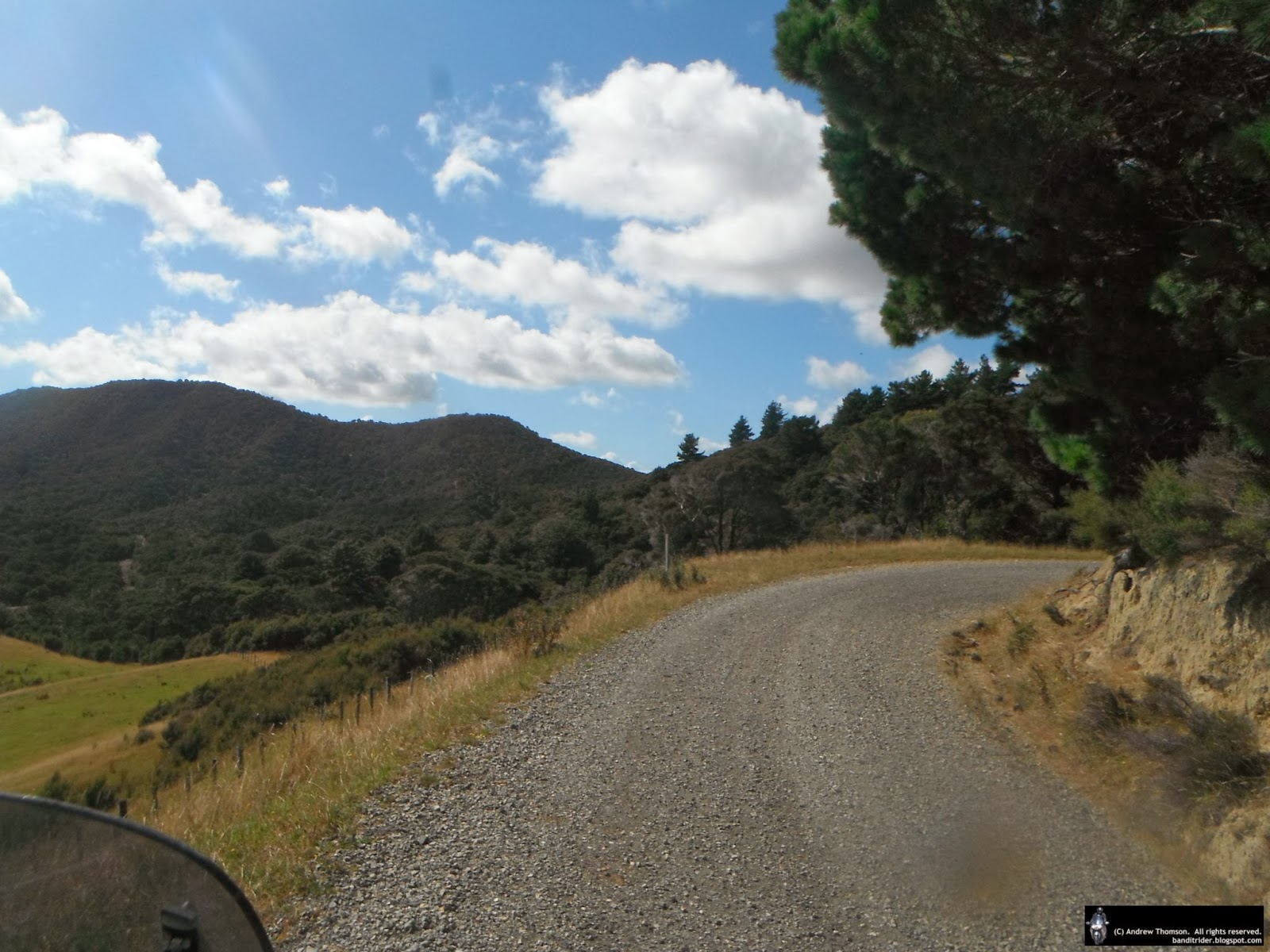 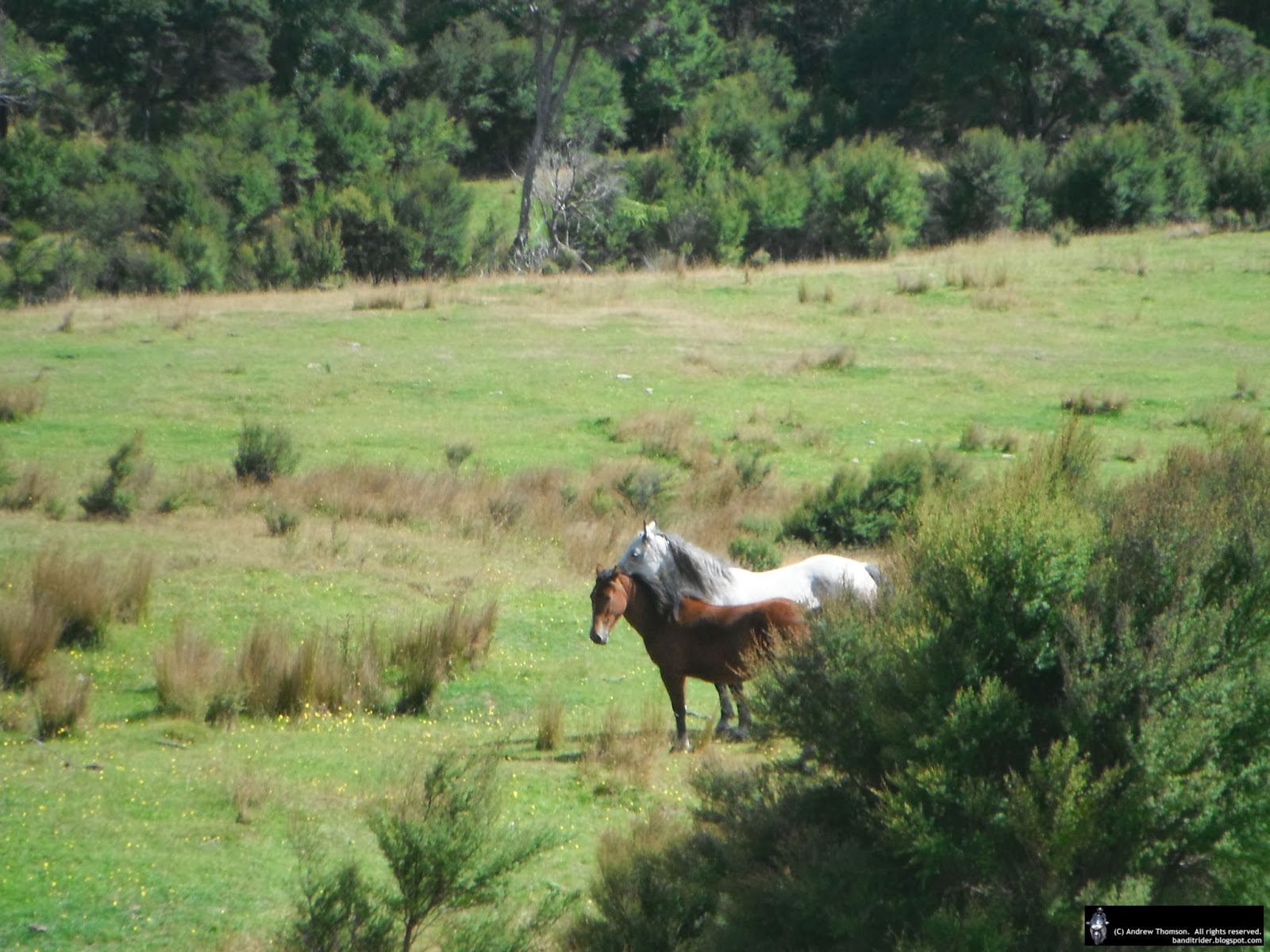 At another intersection Spur Road ends and you can go right on Sugar Loaf Road (a dead-end) or left onto Marainanga Road.  Naturally I took Marainanga Road which slowly opens out onto good fast gravel which was good practice for when I turned onto the magnificent Coast Road to Akitio.  Coast Road is just awesome!  It is a great bit of gravel and the big DL loves to stretch it's legs on it's way to the beach. 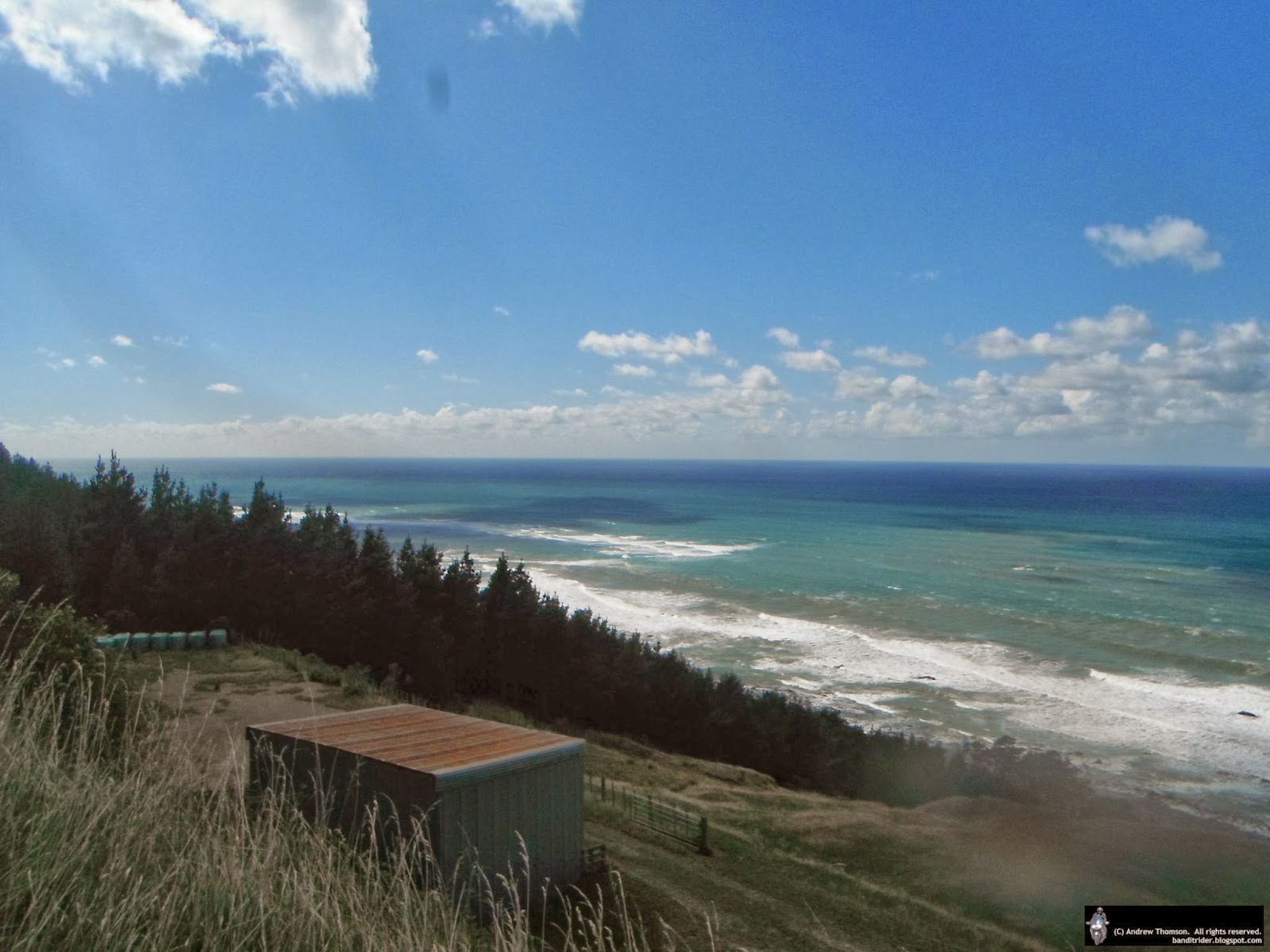 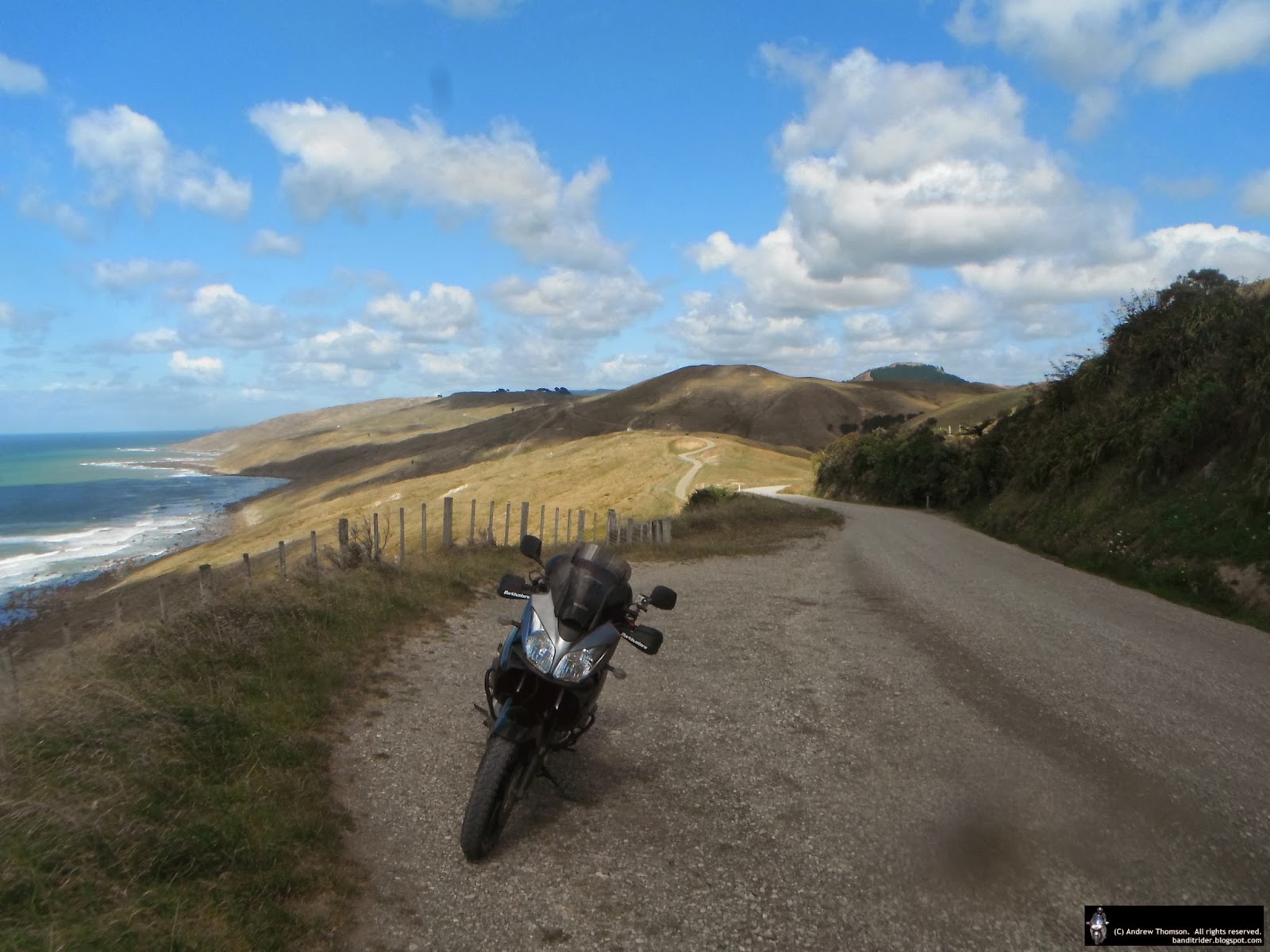 At the bottom of Coast Road is the small holiday spot of Akitio and here it was time for me to take a break and check out the beach.  Not a bad day for it... 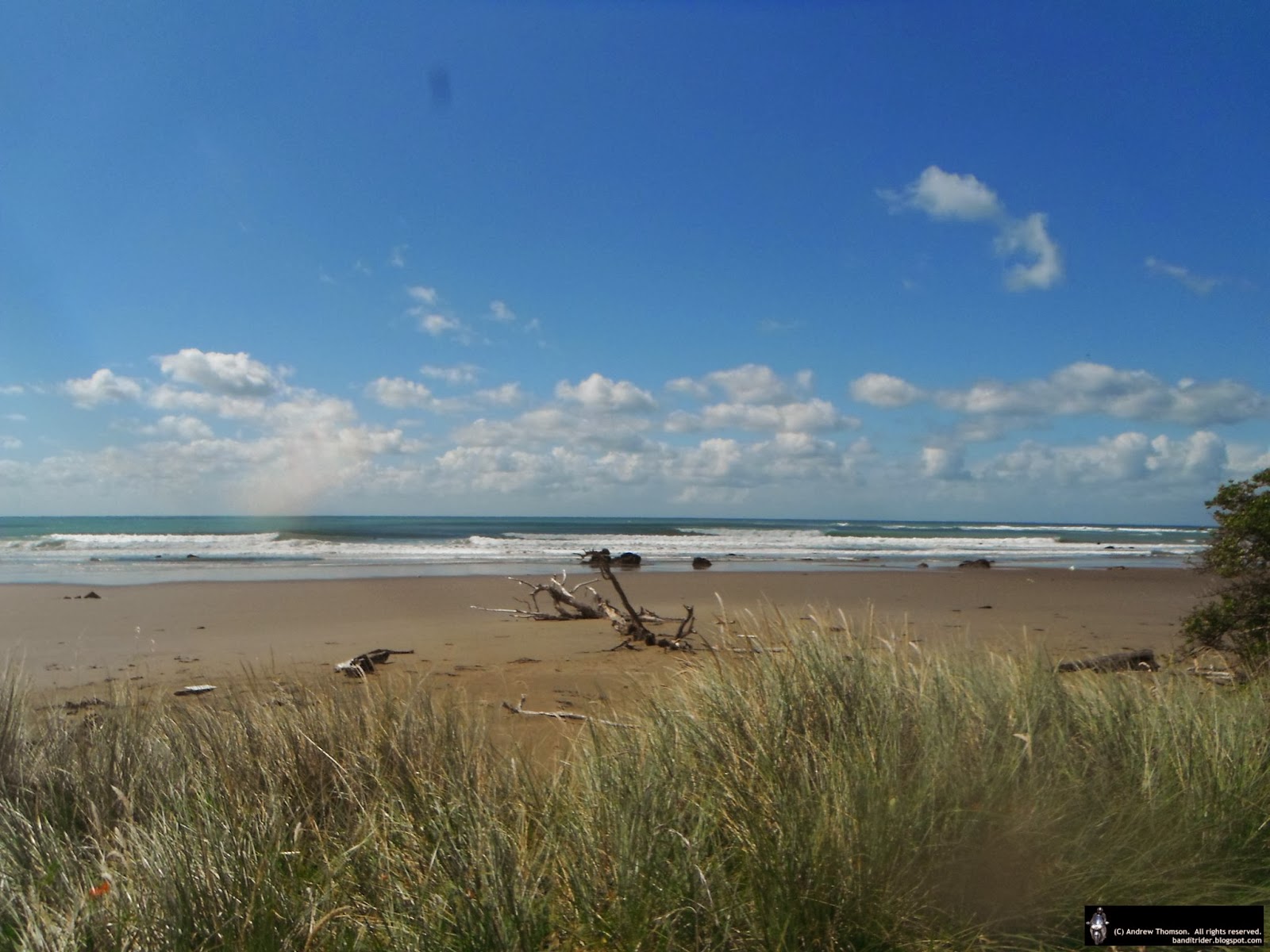 Leaving Akitio on River Road I had a bit of tarmac riding to do before finally getting to try out that road I had spotted long ago.  Glenora and Esdaile Roads turned out to be well worth it - more nice fast gravel.  The DL loved it - can you tell?


Esdaile Road eventually took me to Route 52 where I turned right back towards the Coast again.  After quite a bit of tarmac and some roadworks the GPS let me down by taking me to a turn-off heading up a dead-end road.  I decided against going for a looksee and instead reversed my course and headed back towards Dannevirke.

But I still had another little gravel loop to make things interesting.  I turned off to take in another new road for me - Franklin Road.  This was a nice gravel road that took me through a pine plantation and onto the familiar Birch Road East and then Tahuokaretu Road on back onto 52 again. 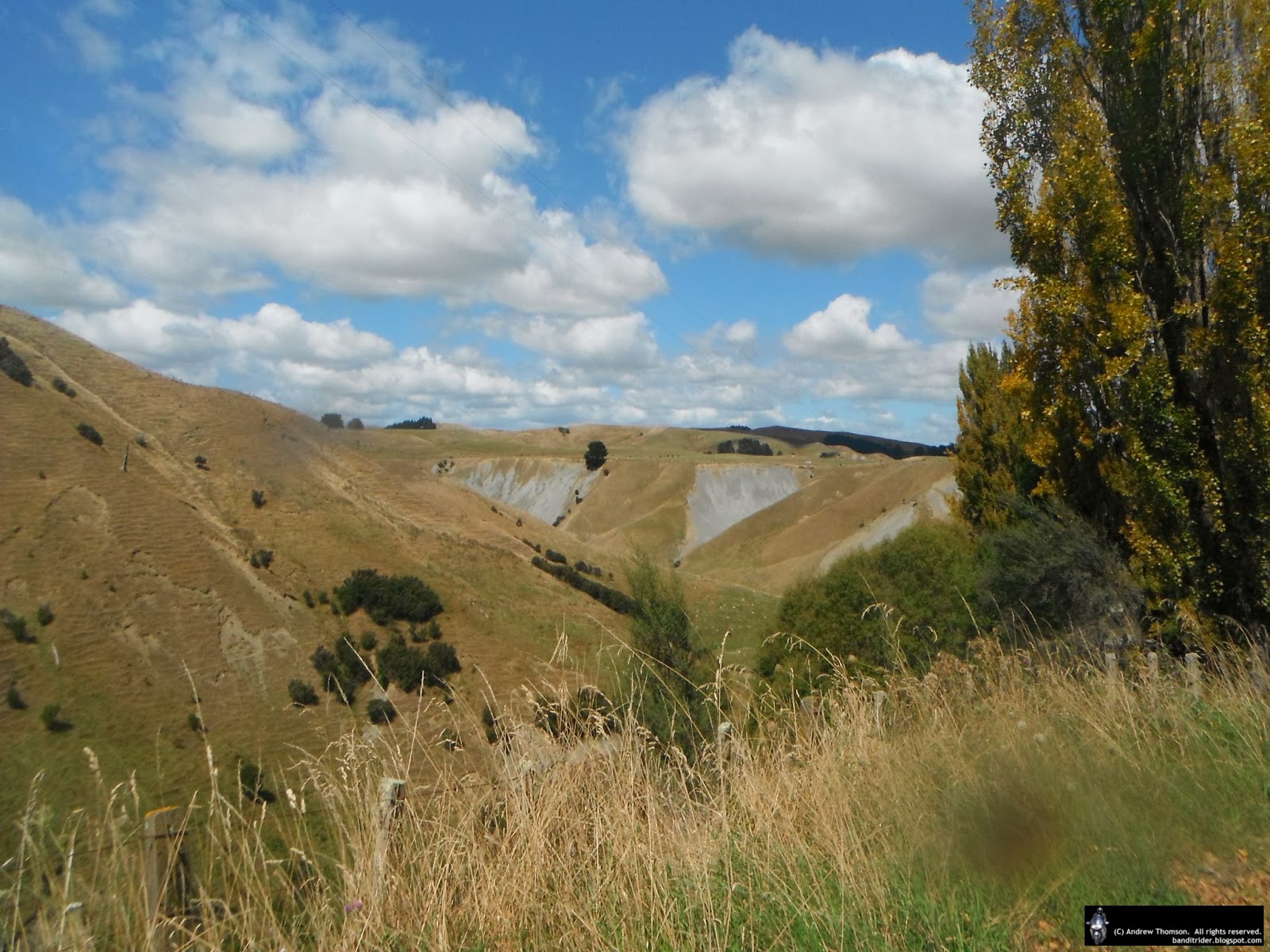 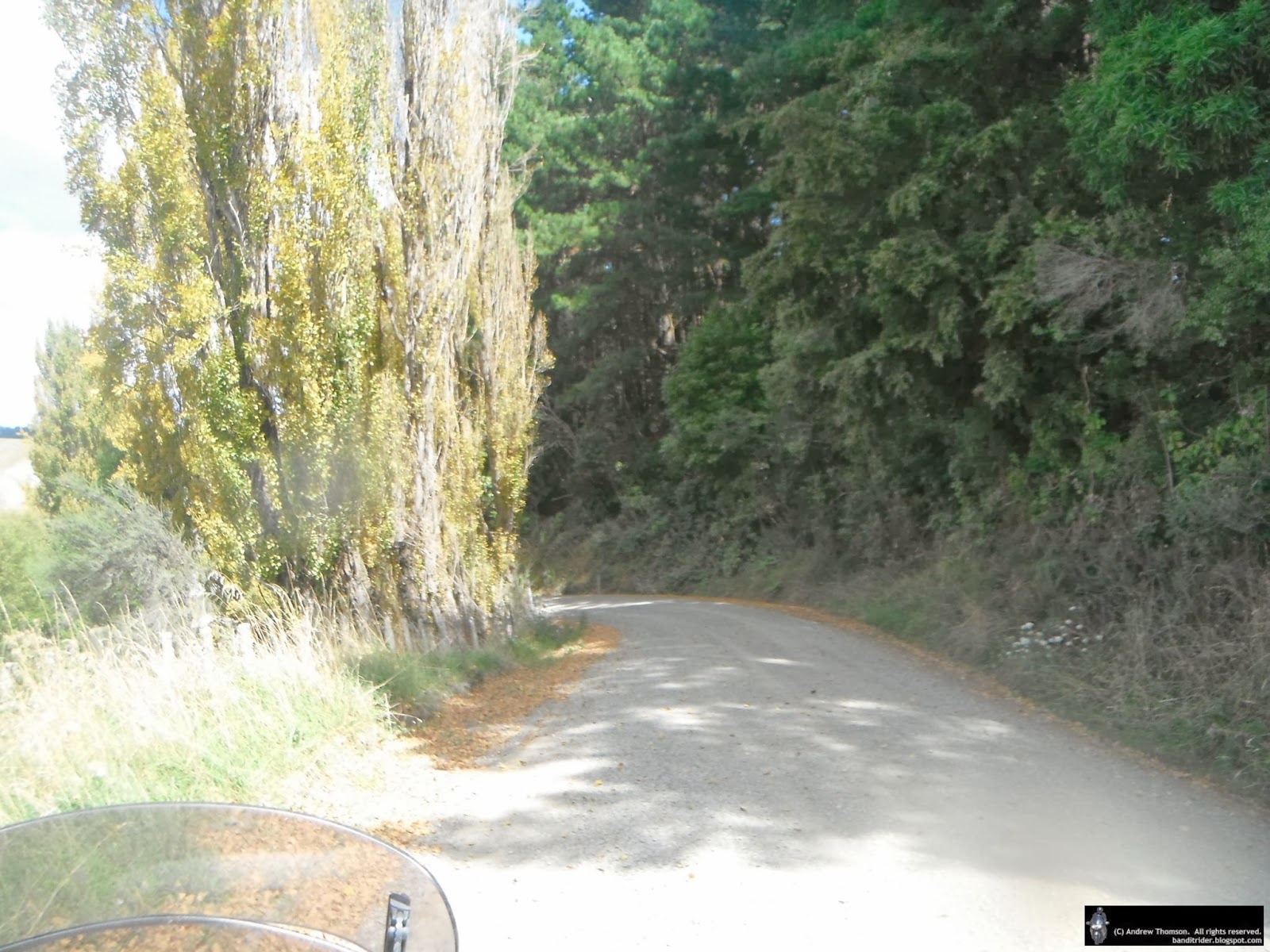 After some more seal through to Weber I turned again to head through the Waitahora Valley.  Waitahora and Coonoor Roads took me on more good, fast gravel through to Makuri again where I had another stop for a munch and a drink. 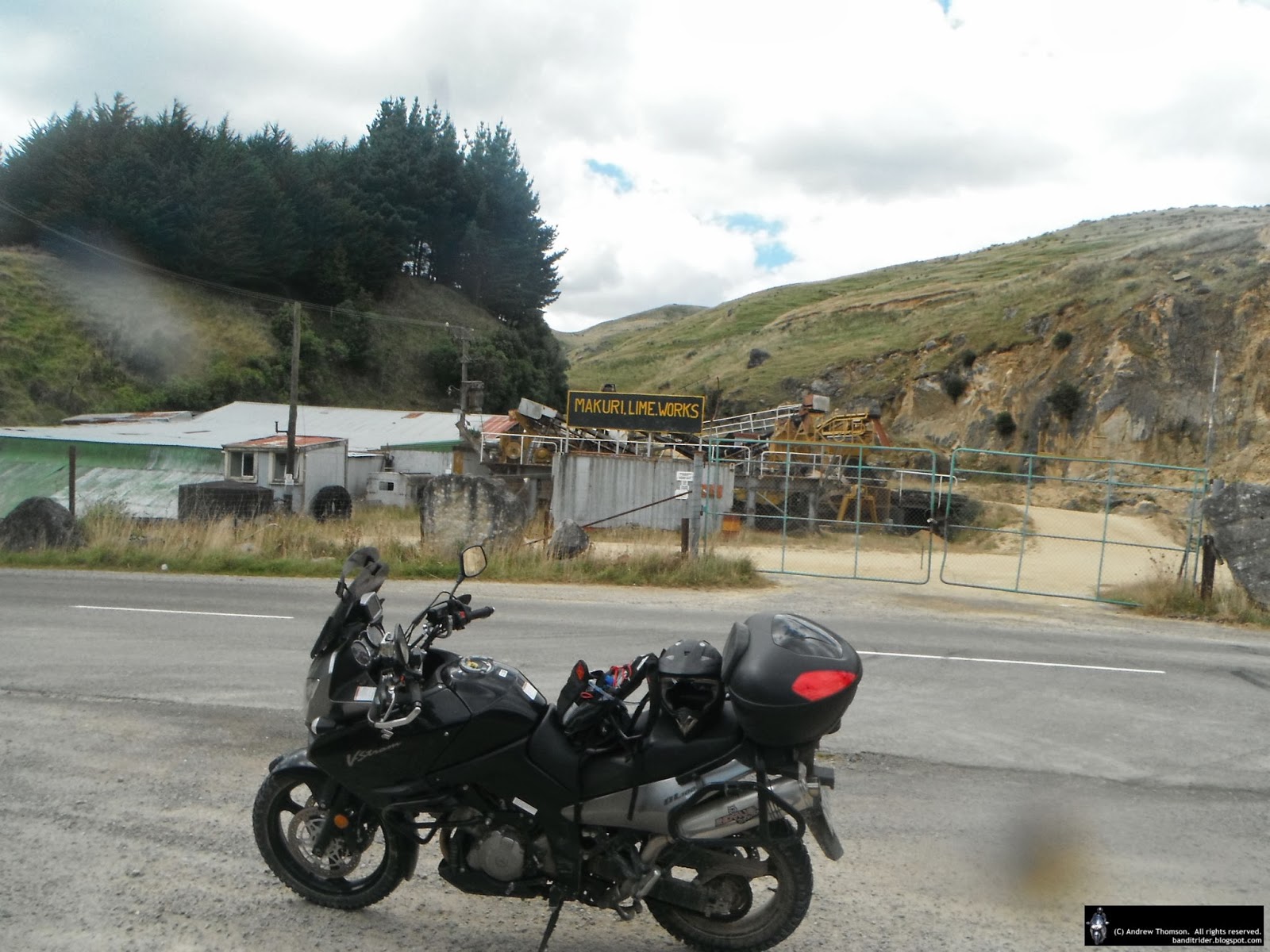 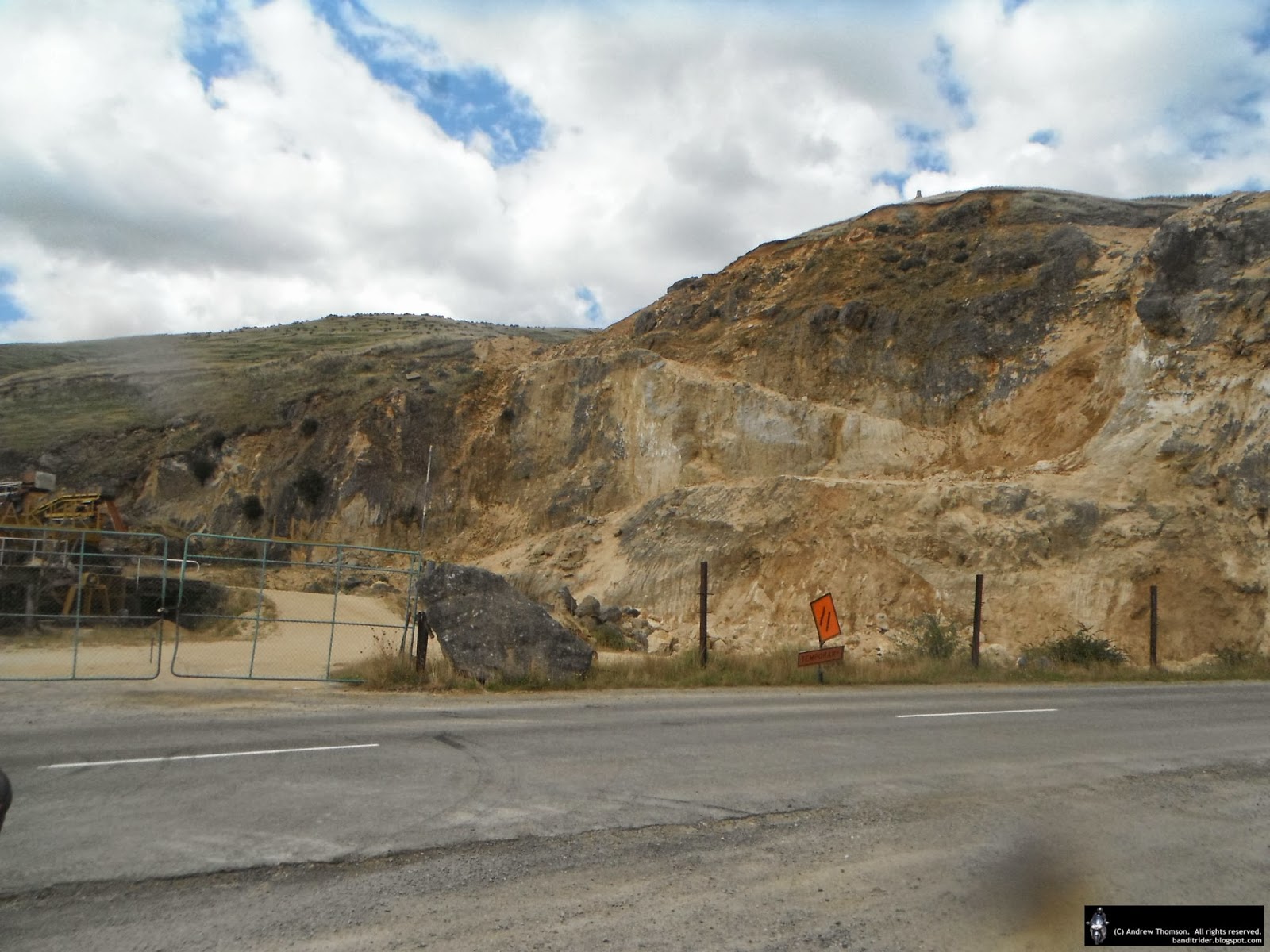 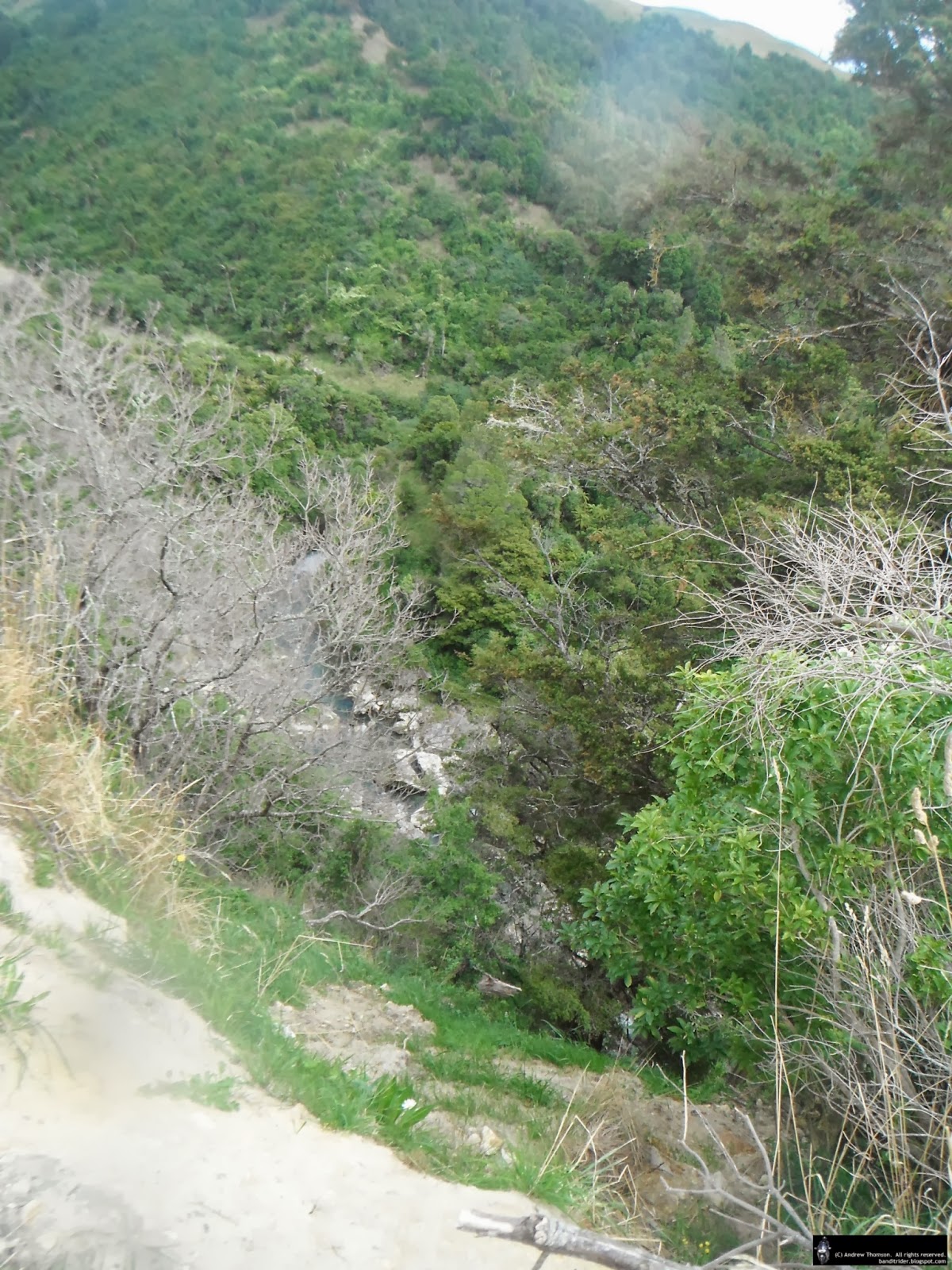 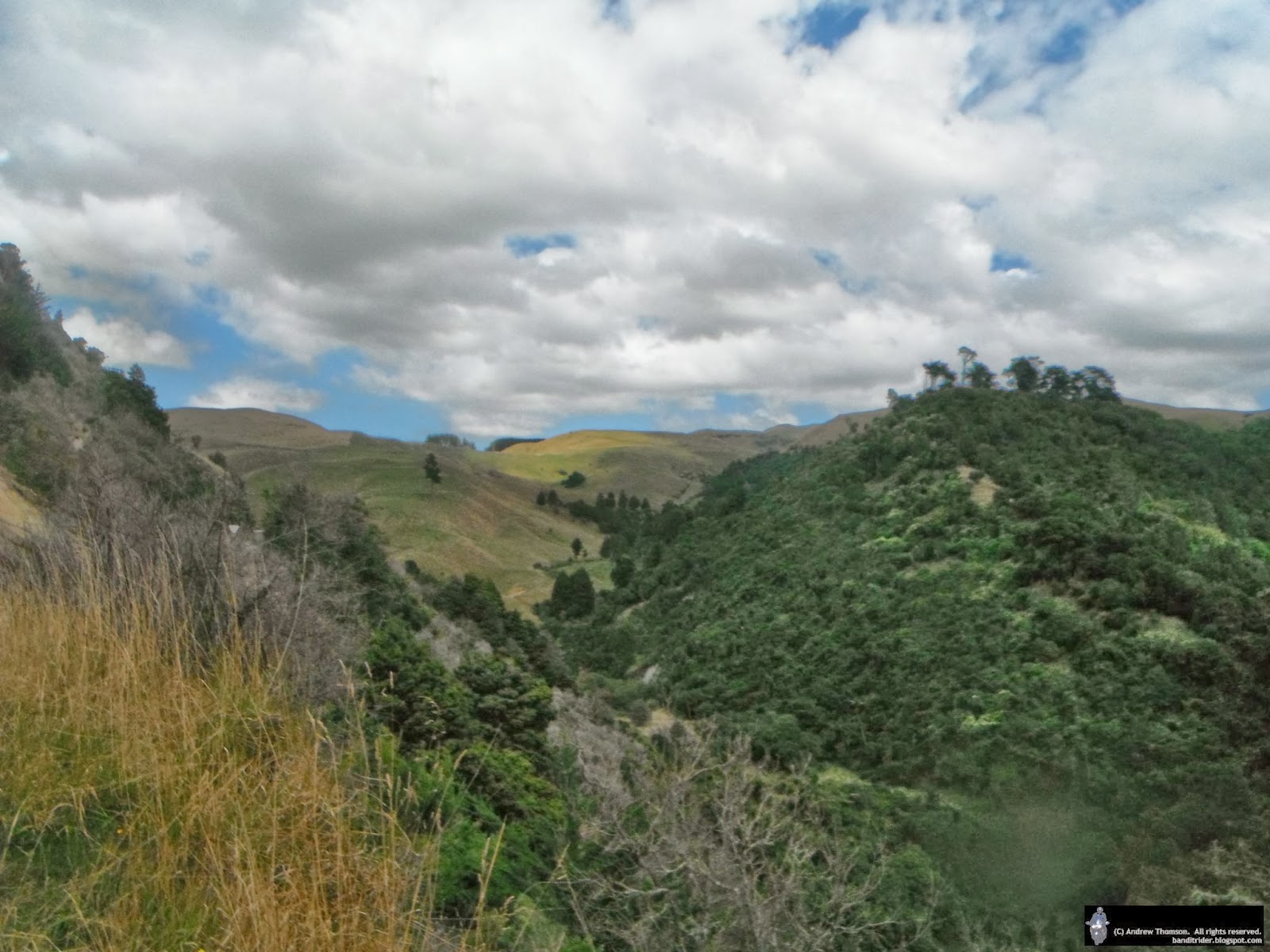 By now I had done nearly 300km and been on the road for just over four hours so was feeling it a little (my backside still remembers the time it's spent on the Connie lately) and decided to just take the easy way home - tarmac all the way and the most direct route.

I got home a bit after 2:30 having had a blast and discovered a couple more new great gravel roads - I think tomorrow the bikes may get a rest...