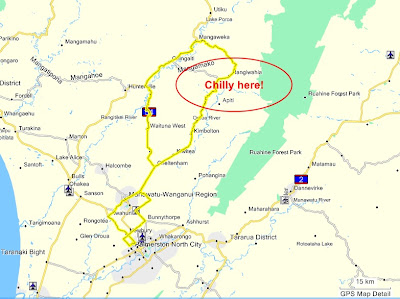 Unfortunately the weather was not playing ball over on the East Coast today so the Fielding Riders' Wairarapa ride has been postponed until next weekend. But over here on the West side of the ranges we've had a nice sunny day (until now - it's deteriorating quickly as a type this) so I decided to rug up and head out on the Connie.

Heated grips on and the temperature gauge showing 7 degrees I made my way over to Fielding where I stopped for fuel. I had no real plans on where I wanted to go - I just wanted a decent ride and preferably to stay dry.

I left Fielding and made my way out towards Vinegar Hill. The weather stayed nice and I stopped briefly at the lookout for some pictures before making my way down the hill. All through Vinegar Hill there were damp places demanding a bit of care but once back out on the main road things dried up.

At Mangaweka I turned off to head through to Rangiwahia and home. The first section of this road is prone to slips and they'd obviously had quite a few through here recently as in places the road was covered in mud which slowed things up a bit. After a quick photo stop I continued on towards Rangi and some threatening looking clouds.

Just North of Rangi things darkened up a bit more and I started noticing some flakes of snow in the air - snow, really? Sure was, my the time I pootled through Rangiwahia it was really coming down and the wind was blowing hard. I've never ridden in snow like this and it was pretty interesting - I was getting blown around and having to wipe the snow off my visor pretty regularly. My little temperature gauge dropped down to 2 degrees and my speed also dropped out of respect to the conditions. I would have loved to stop and get a photo of the bike getting snowed on but conditions were pretty wild and I didn't want to get caught out if they got even worse, so on I rolled.

After about twenty minutes of snow I started to get patches of sun, then snow and then sun again as the weather finally started to improve. The rest of the ride into Kimbolton was done in fine weather on wet roads and the temperature gauge came back up to 7 degrees again. By the time I hit Fielding again the roads were dry and it was an uneventful ride home. A nice little ride of 180kms or so and even the snow was an experience worth having. 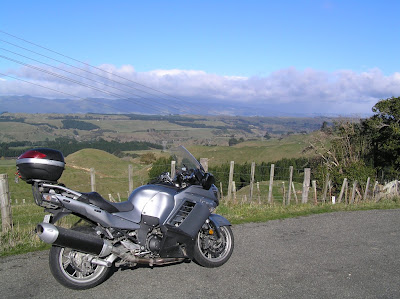 I've no idea what he's saying but it's probably something like, "I've got no idea how I stayed on but crashing sucks!"

Posted by Andrew Thomson at 10:17 am No comments:

Finally had a reasonable day so had to make the most of it. Firstly, I had to go and pick up some packages so out came the VTR and I headed out to the airport. It'd been ages since I'd been out on her and I quickly had a smile on my dial. After playing bike courier I hooned off again to see if I could find a couple of bods keen for a ride - no such luck but at least I was out on the bike.

After lunch I got into some warm gear and headed out on the Honda again. Puttering out of town I picked up a tail - a guy on an XR1200 (ick) and he sat behind me as I turned off onto the track.

The start of the track was great and I was looking forward to say how well the Harley managed things behind me. As I peeled into the first tight left hander I only just got a whiff of something organic before the rear end of the bike headed sideways on me. Great a stock truck was leaving a trail of effluent all the way up the track!

This bit of excitement and the slicks through all the corners slowed things up a bit but by the time we were half way down the hill we caught up with the guilty party. The stuff was fair pouring off the right hand side of the truck creating a nice hazard all following him. The truck eventually pulled over to let us past and I managed to get through without getting covered in anything smelly.

Really good to be able to get out on the bike. The Fielding Riders have a great ride through to Martinborough planned for tomorrow - unfortunately the weather forecast is not good but I'm keeping my fingers crossed as it's time the Connie had some exercise...
Posted by Andrew Thomson at 2:41 pm 1 comment:

Interesting. Not sure how easy it would be to install on a bike...a fireplace instead of a fuel tank?

http://blog.safehandling.com/
Posted by Andrew Thomson at 10:35 am No comments: 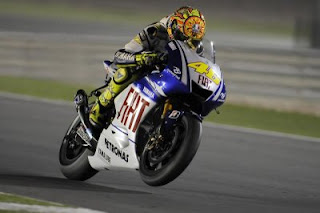 Found this info on twowheelsblog.com about Rossi and some of his racing stats. Helps demonstrate how he has been so successful - consistency!

Great championship this year - very close so far.
Posted by Andrew Thomson at 9:20 am No comments:

A bit of fun

Okay, so it's not bike related but it was a blast. Over the last few weeks Cookie and a local engineering firm have been building a soap box derby racer which finally got it's first outing on Saturday.

There was all sorts of machinery on show and the emphasis was on fun for all the kids both young and old. We new before we even started that we had a quick kart but it was good to see it up against some of the more competitive karts.

Cookie got in a couple of runs while Stefan & myself had 1 a piece. Cookie got stuck behind some traffic but both Stefan and I managed to run away with pretty easy wins. Here's a wee video with some pics of the construction, the competition and the racing!

Posted by Andrew Thomson at 8:07 pm No comments:

Email ThisBlogThis!Share to TwitterShare to FacebookShare to Pinterest
Labels: Off Topic, Videos

Just get the right bike!

Some more info on some of the bikes: http://www.dirtrider.com/features/141_0608_2006_billings_hillclimb_part_1/index.html. Checkout the 230hp Hayabusa powered beastie.
Posted by Andrew Thomson at 7:56 pm No comments:

No excuses, get out there on ya bike!

Posted by Andrew Thomson at 6:52 pm No comments:

Another reasonably nice day so the little red bike was dragged out of the shed for a quiet pootle. I met up with Owl & Pegasus in town before heading off over the track for a bit of fun. Had a bit of a blast over the hill with Owl right behind me and after stopping briefly to let the little Suzuki catch up we get on heading into Pahiatua.

In Pahiatua we met up with Sarge and I had a coffee while the others had what looked like quite a nice feed at the Black Stump. As we were leaving there was the odd little spit but it never came to anything worse.

The return trip took us back into Woodville and then up over the saddle. The saddle was a bit damp in places and as there hadn't been any proper rain, quite slippery. This and quite a few vintage cars on the road slowed the ride up a little but the Ashhurst side was a bit drier and a nicer ride. Good to get a little ride in before the end of the weekend and the dreaded return to work...
Posted by Andrew Thomson at 3:57 pm No comments: