Having not had the chance for a decent ride in the past few weeks today I decided to remedy that by getting out for a short ride on the mighty Vee.

I decided to take a trip out around the Pohangina Valley but to take a few roads I hadn't taken in a while.  It was also going to be interesting to see what the roads were like after some nasty weather a few weeks ago.

I cruised across town and out through Kelvin Grove before finally hooking up with my first bit of gravel on Watershed Road.  It had been a few weeks since I was last on gravel so it took me a while to get comfortable on it again - some of the gravel had had a grader over it recently so this always adds to the fun.

Soon I was on the familiar Zig Zag road but rather than carrying onto Ridge Road I instead took Finnis Road down into the Pohangina township.

Next up was some fast gravel on Pohangina Road to Makoura.  I had a blast along here as I'd got the hang of the slippery stuff and had the tail hanging out a bit on a couple of the great uphill turns - oops!

Up  on top of the ridge things got a bit slower but the scenery got better so I pulled up for a quick photo stop. 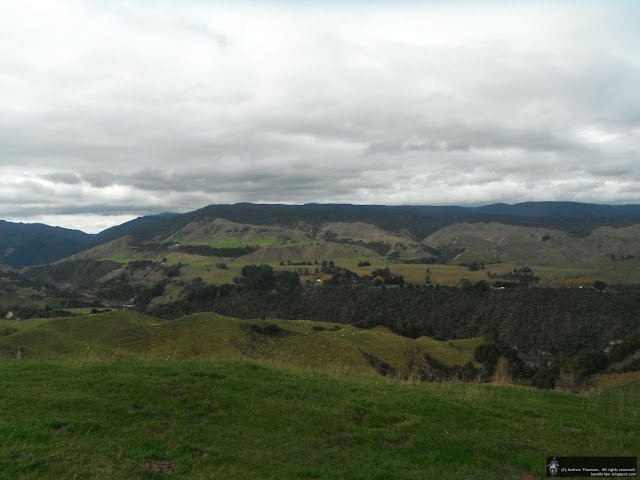 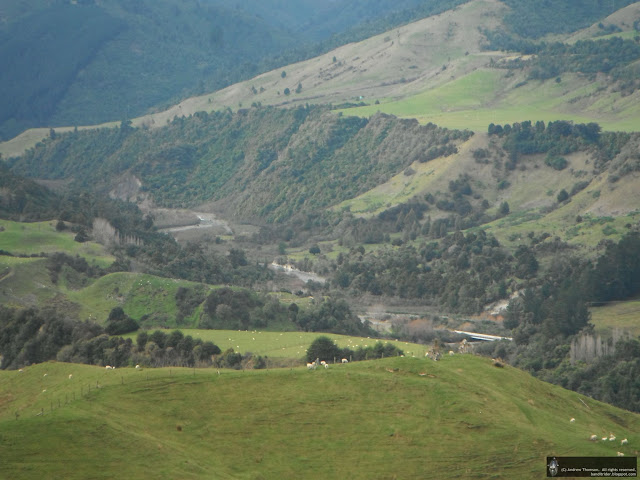 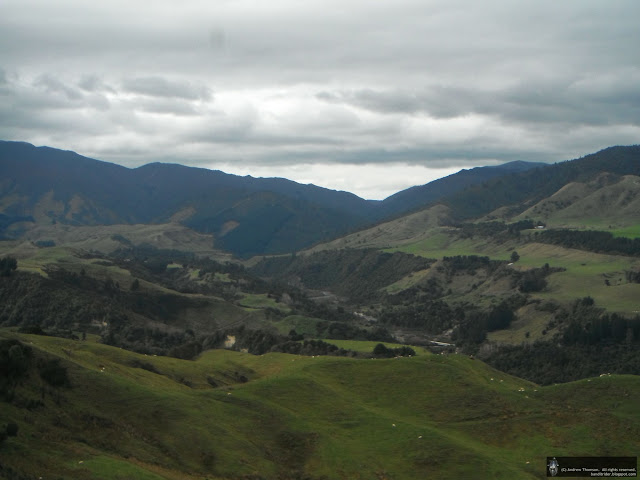 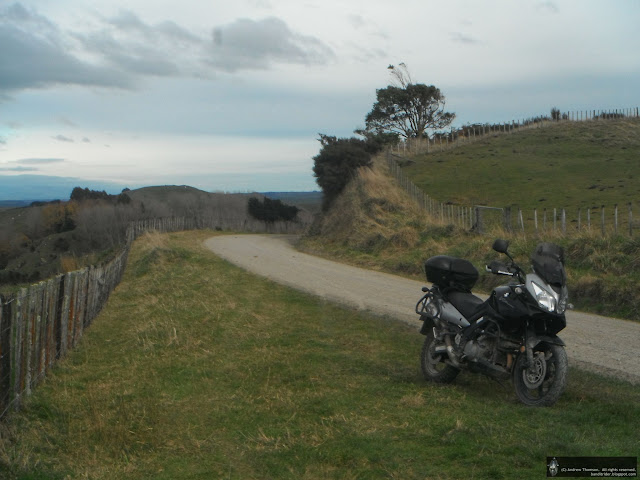 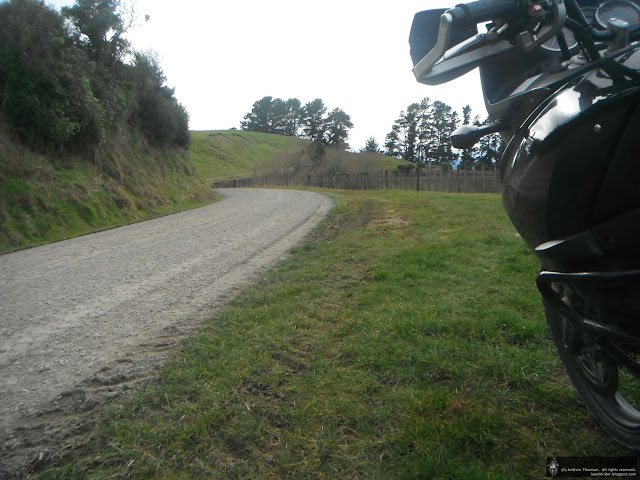 At Utuwai I hung a left to make for Apiti.  After dropping down to the river and clambering back up the other side the road straightens out and is a real hoot on a big dual-purpose bike - you can guess why. 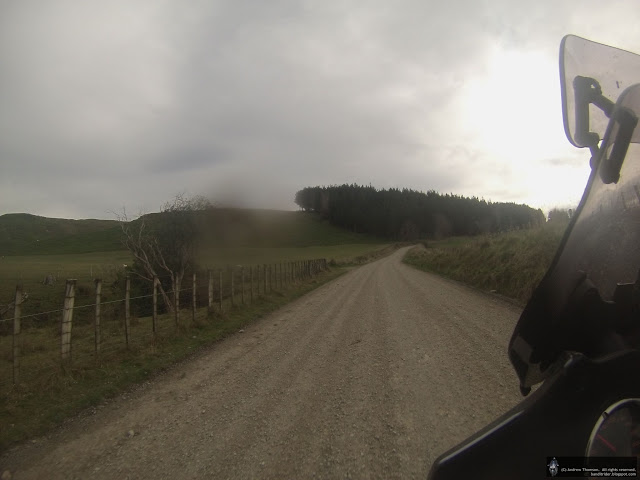 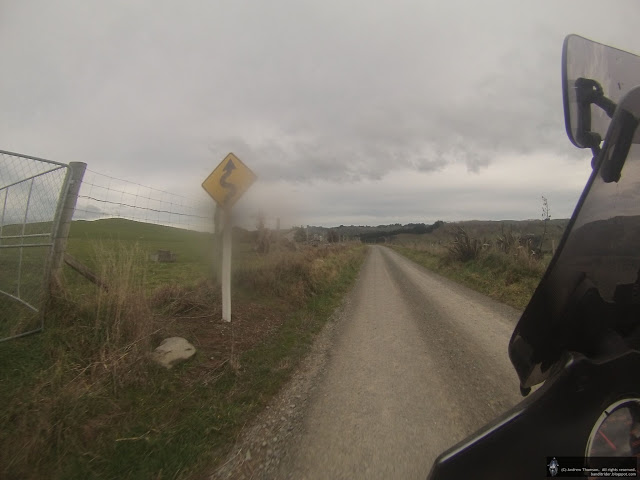 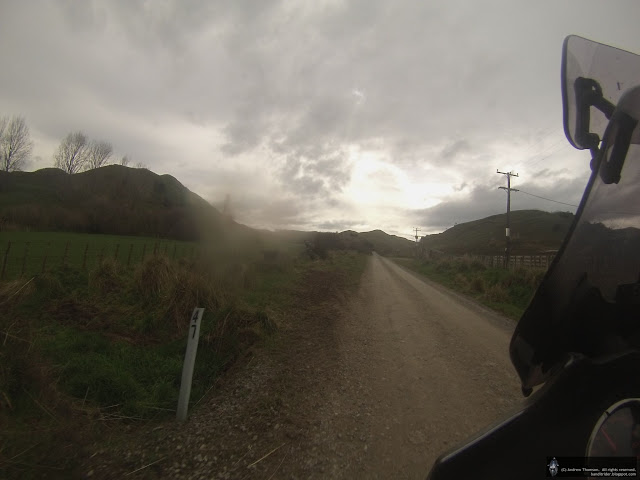 The gravel finally ran out in Apiti so I settled into a fast cruise back to Cheltenham where I stopped for some bacon & eggs wrapped in pastry before carrying on to the old's place for a coffee. 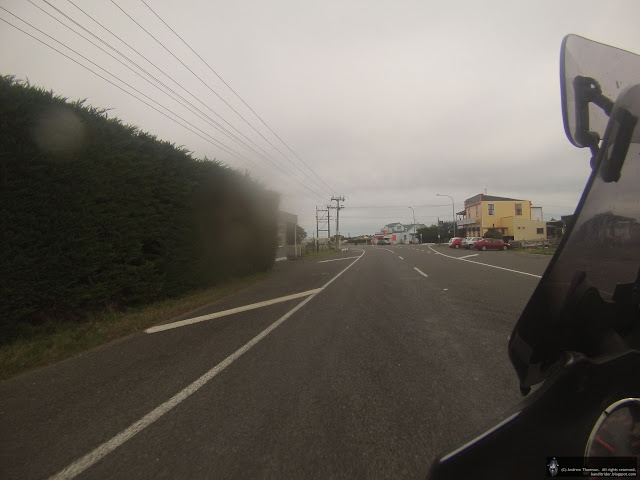 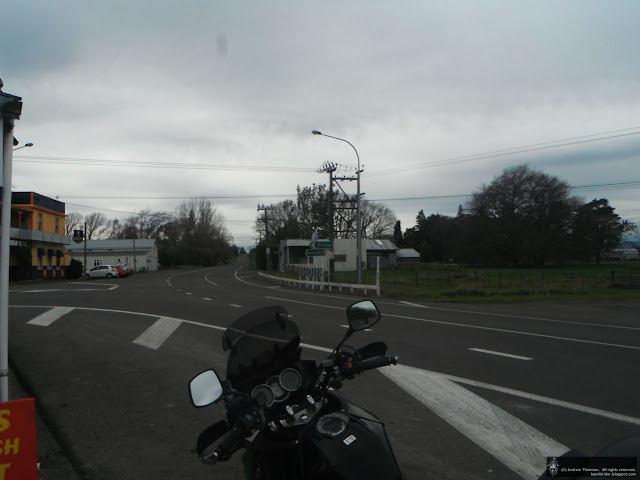 I was finally back home around 2 in plenty of time to give the mower a bit of a thrashing too.  The bike and I both enjoyed our little potter!

Sunday was our monthly Adventure ride, only it wasn't...

Our ride was planned to take us over into the Wairarapa and towards the end of the week the weather forecast was looking fairly dodgy.  On Saturday night it was looking even dodgier.  So, at 5am on Sunday morning Neil fired off an email cancelling the ride - I think this is a first for a BRR ride.

But, Neil was already down here, staying the night at Colin's - and he had to get back home to Ohakune...the weather would be better up on the plateau eh?

Well, maybe not.  Apparently he hit snow by the time he got to Ohingaiti and it tagged along with him all the way home.  It did mean he got some great pictures though: 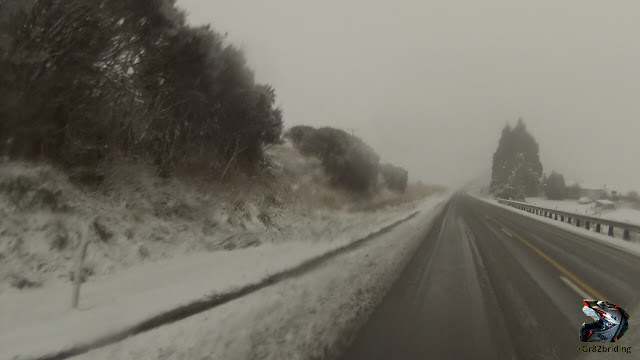 Email ThisBlogThis!Share to TwitterShare to FacebookShare to Pinterest
Labels: Back Road Riders, Pictures

Yesterday was our monthly Black Top Ride and after the flooding that we had a couple of weeks ago I changed our plans from a few loops around Wanganui to a visit to the Hawkes Bay.  The plan was a quick trip up SH50, then to revisit Seafield Road (which was an old haunt of mine), across to Havelock North for lunch and then return via Middle Road and a new to me stretch through Hatuma to Weber Road and then home.


After a night that brought the odd shower of rain the day ended up starting out pretty fine and when I got to our launching point in Ashhurst there was already a few of the gang gassed up and ready to roll. 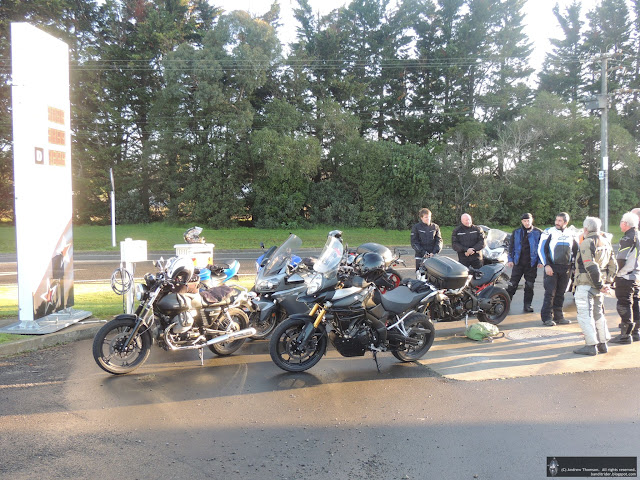 Once the rest of the group (including 3 Buells!) arrived we caught up for a bit and then mounted up and went to check out the gorge.  It was a slow trip through the gorge, stuck behind traffic barely doing 50km/h and it was nice to finally get North of Woodville and get rolling along a bit better.  Even though it was turning into a bright sunny day the roads were quite wet in places so there must have been quite a bit of rain overnight.  By Tiko I sensed that some might want a breather so we pulled up at the pub (shut so no coffee) for a leg stretch. 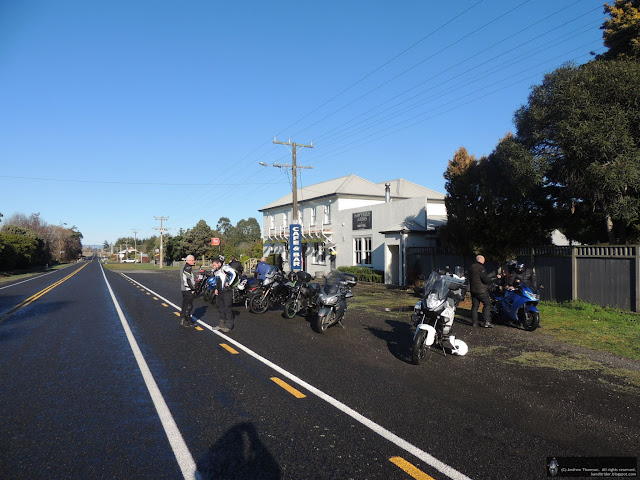 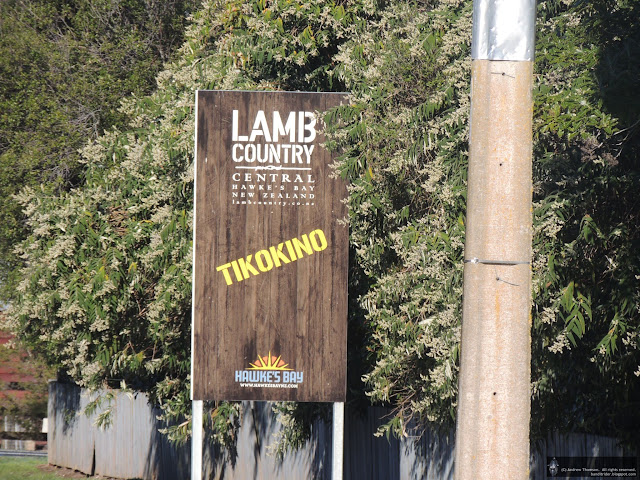 Leaving Tiko we hit my favourite part of SH50 - a stretch that takes you up over a nice little hill and is jammed packed with great corners.  Even though it was damp under foot tyre, it was still fun!


At Fernhill we turned off 50 to head into the wops past Puketapu and finally to Seafield Road.  Watch the video and substitute the soundtrack for that of my wee RG250 ring-dinging it's way (over 20 years ago) through some great windies...


Popping out at Bayview we cruised into Napier and here we got a bit separated.  Looking behind me, I only had one person following me so I pulled up to wait...and wait.  Not good.  I got on the phone to Neil and got the bad news that a young chap on his first ride with us had ridden off the road on Seafield Road.  Luckily he was fine and the damage to his ZX-6 just cosmetic - lucky...

Reunited in Napier, we decided on an early lunch and enjoyed it sitting outside in the sunshine of a great Napier day. 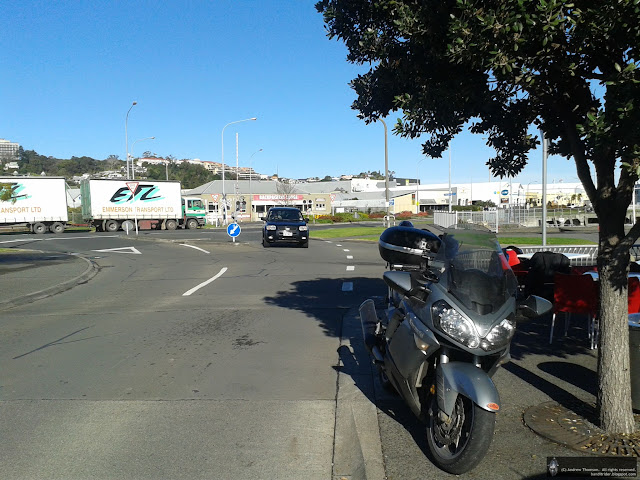 After a nice lunch we remounted and followed the waterfront out of Napier and onto Clive.  Here we fuelled up and said goodbye to the Ninja rider and his riding mates and made for Havelock North and Middle Road.  Not much to say about Middle Road except that it was it's normal fantastic self, enter exhibit A - ignore the bug juice...


Eventually we were back onto SH2 and we pootled along it until just South of Waipuk where we turned off onto Hatuma Road.  I'd never been through here but had always been keen to go for a nosey.  It and the subsequent roads that eventually got us onto the Weber Road were fantastic.  They started off fast and open before getting narrower and windier.  The surface was mostly good except in a few places where there was the odd bit of metal or mud on the road.  The wind also came up a bit and we got blown around some in a few places.

My GoPro got splattered again and all the video I got looks a bit like this: 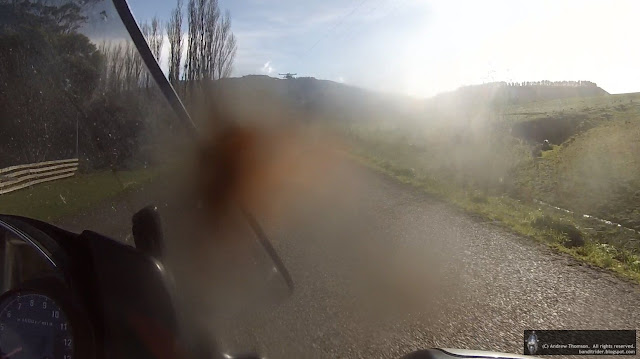 Neil managed to capture a few of the Buels playing around behind him though:


We stopped again at Weber Road for a quick natter (a cold wind was a blowing) before the last leg home.


We turned right at the sign and were soon heading South of Dannevirke.  I took us off SH2 again and made for the Saddle.  We got a few spits of rain on our way and things looked fairly black near the hills but in the end the trip over the Saddle was in pretty good conditions - still plenty of roadworks but a lot of progress has been made.

In Ashhurst a few of us stopped for a drink while the rest departed for home after a cracking ride in fantastic (it's supposed to be winter) conditions!  Now where too next month...