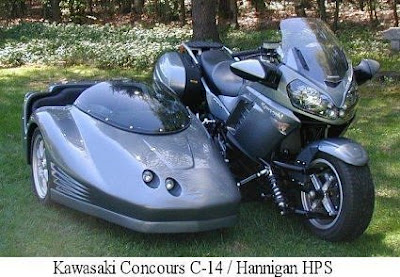 It's just not right!
http://www.concours.org/forum/topic.asp?TOPIC_ID=43429
Posted by Andrew Thomson at 8:04 pm No comments:

For quite a while now I've been running a Dream Bike Poll on my website. It looks suspiciously like a serious Connie fan (and not me) has stumbled on it as the Connie has magically received an extra 440 odd votes practically overnight. Either that or my website is getting a heap of traffic from fellow Connie riders... 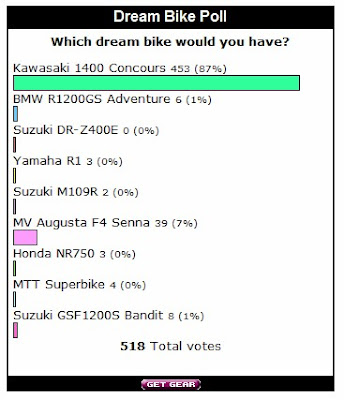 Vote here if you want to have your say.
Posted by Andrew Thomson at 9:10 pm 1 comment:

Yep, got another photo published in the Two Wheels (May edition). This time it was my pic of Mark on the Milford Road taken after the 2007 Southern Cross. 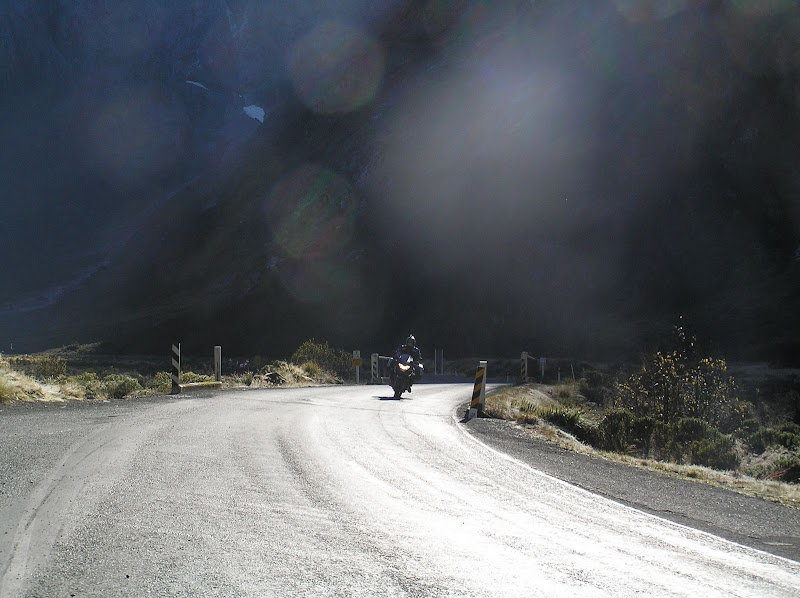 Must send them in some more recent pics...
Posted by Andrew Thomson at 8:58 pm 2 comments:

Nice day for it

Yep, sure was but the plan kinda went out the window. My idea was to go for a nice quiet ride over the saddle, back through Balance and over the track before popping in to see some friends. It all went astray at Ashhurst where I saw a few familiar bikes parked up at the gas station and I thought I'd better stop and say gidday.

Turns out they were heading out the valley and possibly a bit further north to meet up with some more of the tribe coming back with a new bike. Oh well, what the hey...

The ride through Pohangina is always nice though at this time of the year it pays to keep a good eye out through the shaded places as the road gets a bit green and is often damp. Add to this the usual pea metal, stock and the odd slip and it does pay to use a bit of caution 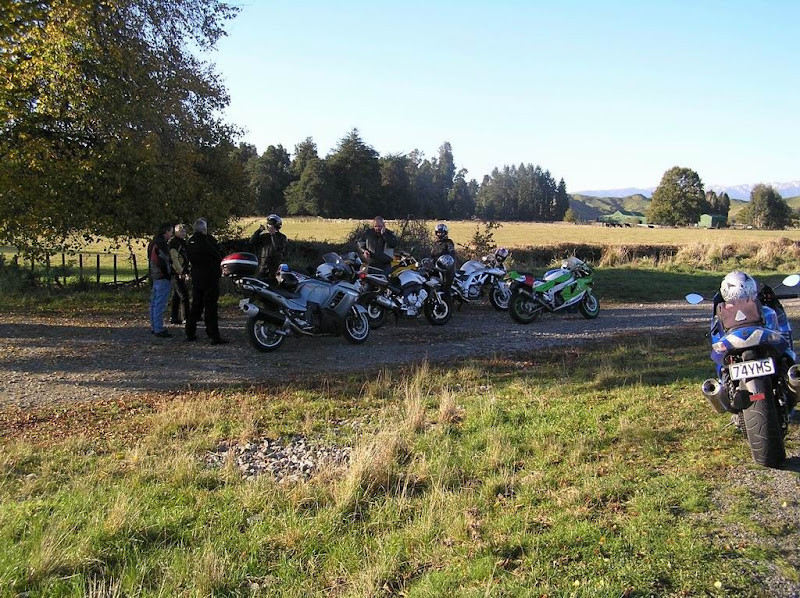 Coming through Apiti there was quite a long stretch of road works but they were not too bad and we were soon through them and out onto highway 54 heading towards Pemberton. This is always a nice ride although the low sun and the odd damp corner suggested taking a bit of care. A quick stop at Pemberton where one of the crew had to turn around to head back and look for his lost tankbag and were off again to Ohingaiti.

Here we stopped for a drink and a breather before the last leg home and to discover that one bike had lost all the air out of it's rear tyre somewhere or other. Luckily some locals had a compressor to help get him going and his plan was to take short hops to each garage if necessary to get him home. Hopefully he made it home safe sound as I and a couple of others headed off before the rest of gang.

Had a really good ride over vinegar hill following Cowboyz (borrowed '86 GSX-R750) and Barry (ZX-14) before finally waving them off at Colyton as I turned for Palmy and they kept on towards Ashhurst and Dannivegas.

Posted by Andrew Thomson at 8:10 pm No comments:

Back on the road

Nice to have the bike back in the shed but it's not for looking at so Mother's day just gave me an excuse to haul it out and take a quick squirt up to the Bay to see the olds.

The weather was a bit dodgy looking and after splashing my way through Ashhurst and the gorge I decided to pull over in Woodville and suit up for the weather. Naturally enough things started to clear the further on up the road I went.

There were a heap of bikes heading south on their way home from the Cold Duck Rally I guess. Interesting to note that the Harley boys can go and party up with people on all sorts of bikes but once back on the road they stick to their own groups and never lift a finger to wave to other bikes on the road. Dunno whats wrong with them - can't be bothered with losers like them.

By the time I hit Tiko things were warming up although the roads were still quite wet. i pulled over again and removed my wets before tucking in behind a nice Audi that was getting along quite nicely. In the end I got tired of following him and left him behind.

On the return trip I gassed up at Hastings and decided to stick my wet weather gear on there. Not a bad idea as it got quite wet in places on Highway 50 and again around Norsewood and of course through the gorge again.

On the plains I caught up to a cop just as it started raining and was forced to slow up, luckily he pulled over to head back across the plains to troll for speeders. Caught up to another by Oringi but this time there was 2 cars in between us so I just settled into cruise mode. Then the cop did a dirty - he pulled over and then tucked in behind me. Eventually we caught some campers on the road so I was able to get away from the cop by passing the campers at the speed limit.

Didn't see another until the gorge but I was dodging puddles at about 80k's so no problems there. Ended up home at about 5pm and put the bike to bed - really nice to be back out on the bike regardless of the weather.
Posted by Andrew Thomson at 5:39 pm No comments:

Well I sure hope so! Picked up the bike today and was most pleased when the ignition key turned and I could actually fire her up. Less impressed with a girl in a car pulling out right across my path all the while staring straight at me and not giving a hoot - tooted and made a simple hand gesture to her to let her know how I felt about the whole incident...

So yep, time to start putting some k's on the bike again...
Posted by Andrew Thomson at 7:23 pm No comments: