It wasn't entirely a shock as Meanie had mentioned it was coming but today I received a recall notice on the Connie. It's regarding the panniers and luggage rack.

Nothing scary like engine/trans/brakes etc but a bit of a worry none the less. What I'm concerned about it my aftermarket Givi rack that is on the way - will it still fit after what ever mods are made? And to make matters worse this is all happening less than 3 weeks before heading off on the Mini's Return - it had better all be sorted out before then!

Guess I'm off to the bike shop tomorrow...
Posted by Andrew Thomson at 7:53 pm No comments:

Meet up with my old man in Fielding today to take in some of the racing at Manfield. Great to see some bike racing again after watching the V8's go at it last weekend.

Most classes featured some great battles for position and in the first superbike race the lap record was borken nearly every lap and eventually was dropped by around 1.5 seconds - they were really smokin! Even the 125's were having a ball and only 10 seconds behind the superbikes in terms of lap times.

The 600 class was really awesome with a great battle between Suzuki & Yamaha going on for the top position. It was a real shame in the first race when the Suzuki rider came off (after avoiding a back marker) handing the win to the Yamaha - until then they'd really been at each other's throats. The 2nd race was just as good!

The first Superbike race was also awesome with Andrew Stroud attacking hard and managing at one stage to take the lead but then loosing it again. He never gave up either although he may have buttoned off a bit once they started making their way through the traffic. Didn't see the 2nd race as Dad had to head off back to Napier but had a great time while I was there and the camera got a real workout!
Posted by Andrew Thomson at 6:28 pm No comments:

Yep, this Mini's Return is costing me money and I'm not finished yet - still got a service & my topbox mount to go. What I'm on about is I've gone and bought a new pair of boots prior to the trip away...

My old Sidi pair (below) have been absolutely fantastic - I think I've had them about 9 years and they have been the single best piece of kit I have bought.

They were recommended by the bike shop that I bought them from as being 100% waterproof and naturally I was a bit dubious of this claim having bought riding gear in the past that made this claim but didn't even come close. The only time that I have had water in my boots is when every other article of my clothing was soaked through and the water had run down into my boots. Awesome boots - full stop.

So it was a bit of a blow that when I went back to the same shop for a new pair of boots to find that they no longer stocked Sidi - they could get them but recommended Alpine stars as being just as good. After a bit of discussion & trying on the boots i decided to give them a go. They appear very well made and have good protection as well as a goretex liner. They also have the same 100% waterproof claim and I hope that the claim is accurate. I also asked the salesperson if he thought they'd last as well as my Sidi & he reckoned that there was no reason why they wouldn't - watch this space in 9 years time... 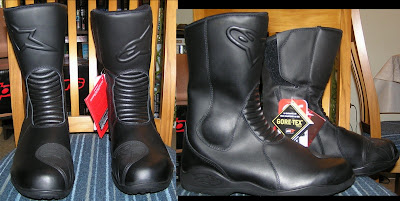 Also, I'm not retiring the Sidi's - going use them until they fall apart. The new boots are for the big runs, the Sidi's can take it easier on the smaller local stuff...
Posted by Andrew Thomson at 9:19 pm No comments: Click Me!
Posted by Andrew Thomson at 7:35 pm No comments:

This afternoon Mark & I sat down and worked out a few ideas on how we're going to get to Invercargill (before) and how we're going to get back from Kaitaia after the Pork Pie. Below are the google maps we came up with to give a rough outline of what we're planning. All subject to change depending on weather or us thinking of something better.

Map 1: Getting there
The plan is to head on down through the centre of the South Island and then cut out to the East Coast and take in the Catlins.

Map 3: Getting Home
The plan is to see a bit of Northland, followed by the Coromandel and the Waioeka Gorge, Gisborne, Napier and finally home

It's getting close now - but not close enough!
Posted by Andrew Thomson at 4:44 pm No comments: Had a nice wee ride yesterday with Brian and Beth from work. We took the two Connies up Highway 50 to Napier. Had a cuppa in Taradale before tackling the Napier-Taupo road - one of my favourites.

The day just got hotter from Napier on and the Napier-Taupo road still has a lot damage to it due to the tar melting and being ripped up by trucks. A bit of care needed in some places but otherwise a great bit of road.

From Taupo it was a quite cruise around to Turangi and then on down to Waiouru. Naturally there were two cops on the Desert Road - the only ones we saw all day...

South of Mangaweka we turned off just before Ohingati and took in the back roads (avoiding quite a bit of stock on the road) back to Palmy. A lot of fun to be had out there with some great winding roads and then some huge straights coming into Cheltenham and Fielding. Got back at just after 4pm after a great day out and nearly 600km's put onto the bike.

Found this 4 bike comparison with the FJR, BW K1200GT, ST1300 & the Connie. Don't agree with the outcome although I'm biased & haven't ridden the winner...


Agree about heat off motor. Disagree about low speed handling and I get better economy (not a ham-fisted bike journo - I pay for my bike & fuel).

Who needs a car? I finally managed to get to a Friday Nite Ride and we finally managed to get the triplets together!
Yep, it took some planning - like riding into work with all my riding gear stashed in my panniers and...well, that's about it. It was pretty tough looking out the window at work all day and seeing 2 Connies all loaded up but going nowhere but somehow I managed to get some work done and by about 20 past 5 Brian & I were both ready for the ride.
We headed on out to Ashhurst where we were the first to arrive. Pretty soon others started arriving including Connie number 3 with Meanie being pretty keen to check out Brian's muffler. By the time we left Ashhurst there was about 16 of us with about 5 learners on their 250's.
From Ashhurst we had quite a blast over the sadle before regrouping on the Woodville side and then heading off through to Balance. From here it was another quick squirt over the track into Pahiatua where we all needed a cold drink.
After our pitstop we returned via Mangamire & the Track before regrouping to chat about the ride and then go our separate ways. Not a bad way to finish up the working week... Posted by Andrew Thomson at 10:21 am No comments: