Yep, awesome day in Palmy today so Brian and I decided to go for a ride after work to make the most of it. We shot over to Feilding where I topped up the Honda before we went to attack Vinegar Hill.
After a great ride through Vinegar Hill we stopped in Hunterville for tea before the return ride home. Leaving Hunterville we did a little loop behind Hunterville to avoid a little bit of SH1. We still had to do about 20km of SH1 (1 x speed camera and 1 x rolling cop) before taking the Halcombe turn-off.
Instead of rolling through Halcombe and then into Feilding we turned off again and rode through to Mt Biggs before the last little leg into Feilding and home. A really good ride to blow the cobwebs out before the last day of work before Xmas.
View Larger Map
Posted by Andrew Thomson at 9:27 pm 1 comment:

Ok, ok, so it's Wednesday and I haven't written up the Friday night ride yet - well here goes.
I met up with the guys at Ashhurst as per usual and it was nine of us who eventually left on our weekly wind down ride. We had a great ride up and over the saddle before taking in a bit of Topgrass road and then crossing SH2 at Oringi for some more back roads.
After a final squirt through the gorge we parked up at the recently renovated Ashhurst pub to enjoy a drink and a bite and a fair bit of yarn telling. Not a huge ride but a good night out on the last Friday night ride for the year.
View Larger Map
Posted by Andrew Thomson at 9:18 pm No comments:

Posted by Andrew Thomson at 6:39 pm No comments:

Posted by Andrew Thomson at 6:44 pm No comments:

Am I know-it-all old fart

Tonight I was out walking the dog when I saw a young guy go past on a Yamaha Scorpio. He was riding right up on a car's bumper and only wearing shorts. I tut-tutted (old foggie-like) and carried on walking.
When I stopped at the shop here he was trying (and failing) to get his bike up on it's main stand. I asked him if he was ok and if he wanted me to show him how to get it on the stand easily. He mentioned that it was a bit of a heavy old thing . I didn't mention that my Connie out weighed his bike by over 100kg and showed him how to use his weight to get the bike up on the stand - none of this lifting nonsense.
And then the most convincing display of codgerness - I told how I didn't think much of his safety shorts. I guess it's been a while since I was young & dumb enough to ride in shorts...
No, I'm not going to buy a Harley!
Posted by Andrew Thomson at 8:02 pm 1 comment: 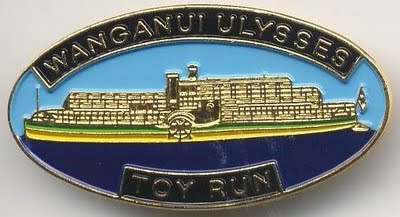 It's been a ride filled weekend - starting with the FNR, the Coast to Coast, scoring a tag and finishing up today with the Wanganui Ulysses Toy Run.

It was not quite so windy today so Brian and I took our Hondas on the ride and picked up Mark on the way out of town. A quick stop in Feilding for fuel and then a few back roads to Turakina followed by a cruise along the main road got us into Wanganui in plenty of time to grab a sausage before the ride started.

This year the ride took a different route, instead of going through the Turakina Valley road into Marton it went further off the beaten track towards Hunterville before turning for Marton. Brian, Mark and I decided not to go into Marton and instead went and played on Vinegar Hill before puttering home. 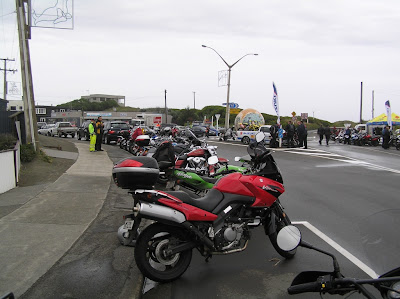 Today was the running of the annual Coast to Coast ride from Himatangi to Herbertville to raise funds for the local rescue helicopter and although I woke to pouring rain by the time Mark and I left we could see clear skies out towards the coast.
What a shame that just down the road the skies opened and gave us a serious drowning. We pulled over on the main highway and donned our wets before continuing on. Naturally, 5 minutes down the road it stopped raining...
In Himatangi we signed up for the ride and got our badges before catching up with some of the other Manawatu crew and watching the rest of the riders turn up. Numbers were definitely down on previous years (probably due to the weather) but there was still at least a couple of hundred bikes parking up and donating their entry fee to
the helicopter.
After a riders' briefing we departed Himatangi and rode through to Foxton and then Shannon. Mark and I stopped quickly here for fuel and then joined the ride a bit further back in the pack. The ride then carried on up through Tokamaru and Linton before sneaking past the back of Massey and hitting the track. The track was a bit damp in places and pace was pretty slow with riders and bikes of all types generally taking it easy. 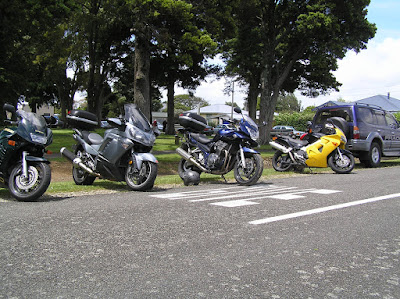 Riding through towards Ballance we came across a GSX-R in the ditch but it looked like the rider was ok - a shame to see this but unfortunately this ride often sees people on it who over estimate their abilities and do something silly. In Woodville we parked up with the rest of the bikes, grabbed our lunch and caught up with Shelley, Connor and his granddad.
After the lunch break we carried on towards Mangatainoka and really had to battle with the wind - it was blowing very hard in exposed places and made for some interesting riding.
Thankfully when we turned off towards Pongaroa we either had a tail wind or were protected from the worst of it by the surrounding hills. I had a great ride through to Pongaroa and finally Akitio where a cold drink was definitely in order after quite a hot ride.
Mark and I waited in Akitio for the rest of the hordes to arrive before leaving early (and missing the prize giving) and making our way to Weber and then Danniverke. We followed a DL650 for quite a while until we hit the wild windy weather again - his lighter bike seemed to not like the wind so much and I found a slightly quicker pace was best for me on the Connie.
From Danniverke we simply took the main road home, stopping just the once for petrol in Woodville. All in all, not a bad ride and good to be able to help out the rescue helicopter again.
View Larger Map
Posted by Andrew Thomson at 5:36 pm No comments:

Email ThisBlogThis!Share to TwitterShare to FacebookShare to Pinterest
Labels: Coast to Coast, Rides

Not a very big turnout last night for the Friday night ride last night but I guess a lot of people are busy at this time of the year and also the weather didn't look that flash prior to the kick-off.
In the end there were just four of us who left Ashhurst to take on the Apiti Loop and that number dropped to three when Matt decided that he'd only do part of the run. The ride itself was a blast but quite hot work in the humid conditions. After blasting around the valley we stopped in Kimbolton for a cold drink before heading home in plenty of time before the rain finally came down.
Posted by Andrew Thomson at 5:28 pm No comments:

After a year of owning a V-twin I've finally weakened and bought some aftermarket mufflers for the VTR to unleash some more of the V-twin music. They're a set of Two Brothers Racing Titanium mufflers. Installation was a piece of cake, the only issue was waiting 24 hours for the sealant to cure before I could fire her up. 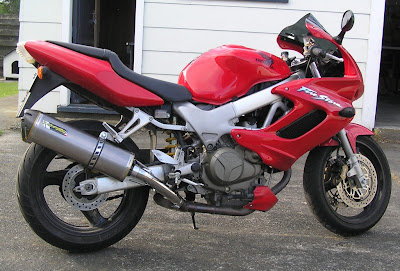 So what's the verdict? Well, she's loud! Possibly a bit too loud but it is great fun working your way up and down the box - the overrun in particular is great and you also get the odd crackle and pop. I'll post some video of the bike running at some stage so I can share the music...
Posted by Andrew Thomson at 5:18 pm No comments:

A while ago my website was moved by Google from Googlepages to Google Sites. In the process something went wildly wrong and it bit the dust big time. Well, it's taken a while but I've finally rebuilt the website here.

And I've also finally finished writing up my report on the Southern Cross too.
Posted by Andrew Thomson at 7:36 pm 2 comments:

Yes, it's that time of the year again - toy run time! First one off the mark was the CDMTC run today. A fine day today brought out plenty of riders keen to support the cause and enjoy a short ride over a few back roads to Palmy.
Brian and I got there early and had a bite of lunch while we waited and were soon joined by plenty of others including Mark and some of the other Manawatu crew. We even were given a huge bag of soft toys by a nice lady who wanted to make sure they got to the kids. These had to be spread amongst quite a few bikes but was a very nice gesture by a non-motorcyclist. 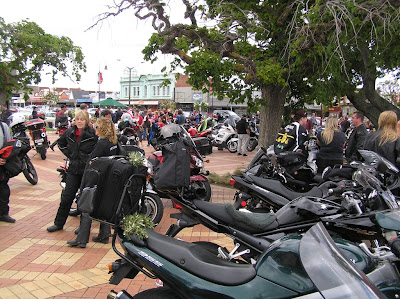 Next toy run: next Sunday, Wanganui...
Posted by Andrew Thomson at 7:13 pm No comments: