Perhaps putting "Winter" in the title of this ride wasn't the best idea - it perhaps encouraged Mother Nature to get involved and supply some dampness...

But that's getting ahead of things.  After a great ride in the 'naki checking out some tunnels courtesy of Phreaky Phil, I decided to return the favour and organise a wee outing down this neck of the woods.  After a bit of a survey, I settled on a date that would suit most people and got down to planning the route.

Saturday was ride day and before leaving home I took the time to put on my wet weather gear only to take them off at the garage as I was getting too hot and was feeling optimistic about the weather - silly me...

When I arrived there were already a few others there checking out the coffee and pies and it was not long before we had a pretty decent sized group all raring to go.  It was great that people had come from all over the show - some even staying in town over the weekend. 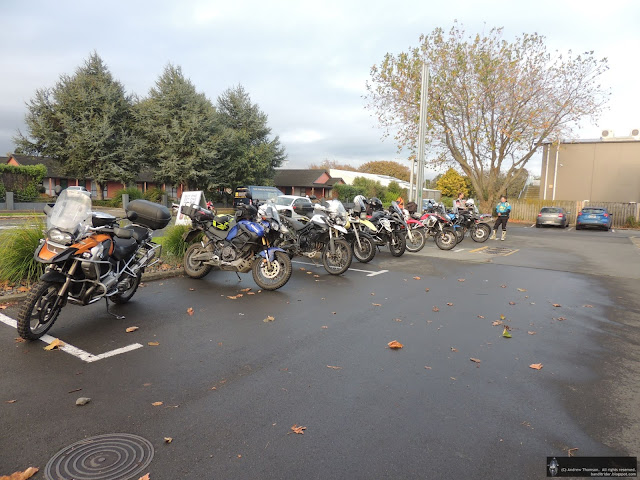 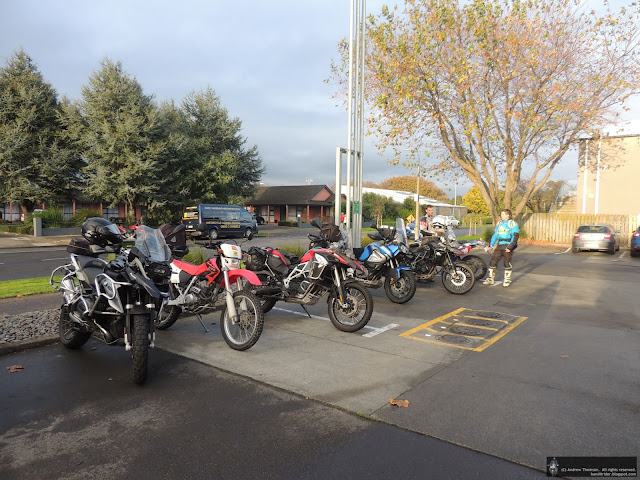 Once we were all there and had sorted out who was who and which was the coolest bike there (mine by unanimous decision), I gathered the troops and tried to let them know what the plan was.  We then geared up and said goodbye to Palmy.

Just before the Pahiatua Track I passed a tanker and got away a little on most of the guys but somehow or other Colin L slipped and slid his way to P2 before we dropped down the other side.


We stopped briefly for a regroup as not everyone had managed to sneak past the tanker so we got fairly spread out.

Next up was the short stretch of gravel on Tararua Road to give the guys a little taste of gravel before rejoining the seal to Pahiatua.

But there was no stopping in Pahiatua as we hustled to get onto the Pahiatua-Pongaroa Road in search of more gravel.

The further East we got, the damper the conditions got and by the time we hit the next bit of gravel on Coonoor Road I was kinda missing my wet weather gear...

Arriving at the bottom of Towai Road we were forced to grind to a bit of a halt as there was tape across the road and some blokes standing around looking important.


The first joker we talked to told us that the road was closed due to a rally being run on the road and it looked like we were going to have to do an about turn and find another route.  While I was working this out with Ross another important bloke turned up and allowed us through.

So we got to partake in a rally with a 3km sprint up the hill to where the cars were parked and a front-end loader was blocking off the other end of the road.  Not a problem for us to get around though...

Later on Glen told me that he had been invited on the Rally but turned it down in favour of the ride - unfortunately he didn't know that they were going to be on our road.  He did however find some video of one of the cars tackling the hill...


The rest of the ride up to the top of the hill was fun although it was very windy.  There were also a few maniacs on the loose:


More gravel and more than enough rain got us through to the next planned stop at the Waihi Falls where we caught up for a bit and ducked out of the rain for a while.


After the short break it was time to brave the weather to Pongaroa - I even cleaned the GoPro for the trip....


The closer we got to Pongaroa the worse the weather got and the poor old camera got a good coating again.


Arriving in Pongaroa we parked up while those nervous about fuel took some onboard.  It was very wet at this stage and I didn't even pull the camera out...

And here's a quick slideshow made from about 280 GoPro pictures from Palmy to the Pongaroa.  Hopefully it gives you a feel for the weather.


By now it was around 11am and I decided that we needed to shorten the route if we wanted to get to our lunch stop before dinner time.  This meant abandoning the "Southern" loop through the Tiraumea Valley but still meant that we got to ride the fabulous Coast Road to Akitio.  The sun even tried to poke its head out for us.


Still keen to keep us moving, there was no stopping at the beach as we turned West again on River Road until the next turn-off onto the gravel Glenora Road.  The gravel was an interesting orangey colour, quite wet and even muddy in places as we made our way across towards Route 52.


On Route 52, I once again skipped out a little section of gravel to help gain us a bit more time.  The lumpy, bumpy 52 is fun on a big motard though...especially when the rain stops and roads dry off a bit.


More tar North of Wimbledon took us through to
Taumatawhakatangihangakoauauotamateaturipukakapikimaungahoronukupokaiwhenuakitanatahu where I thought we could just manage one last stop before lunch. 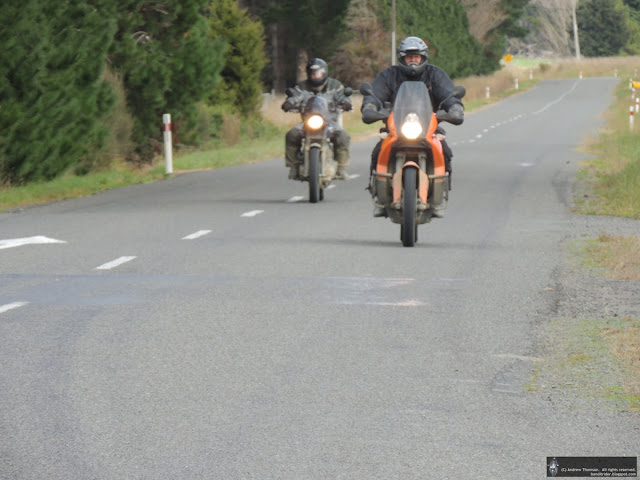 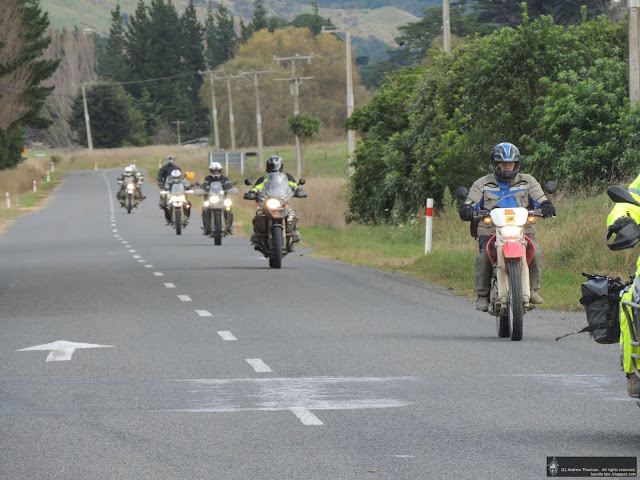 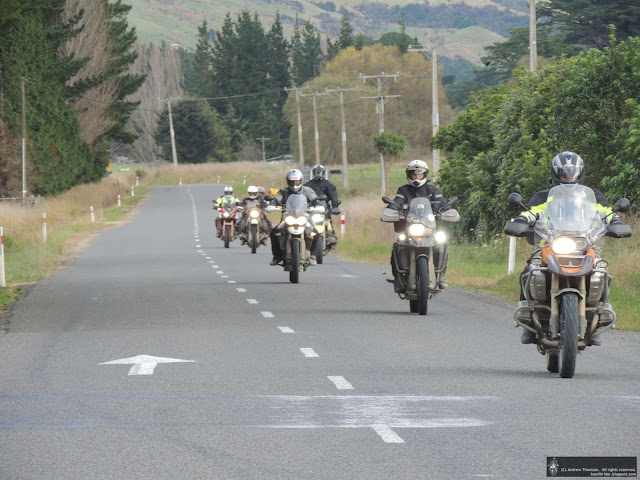 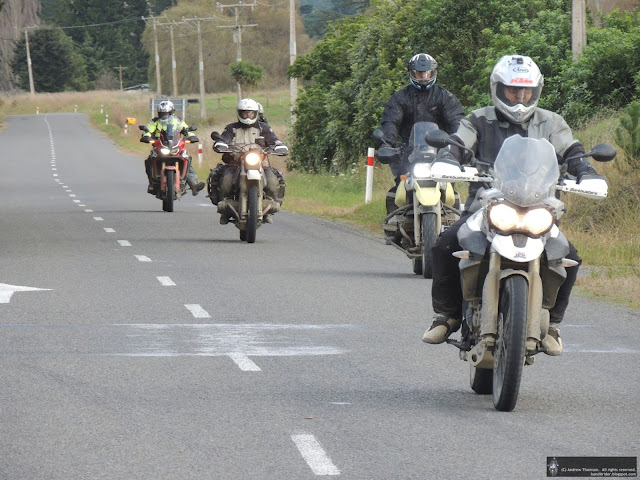 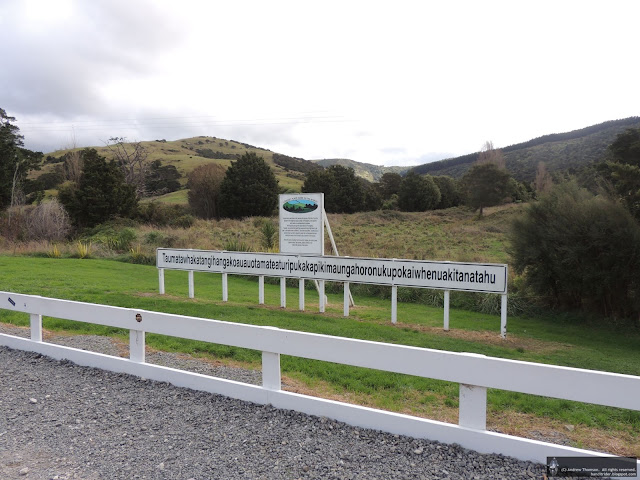 Lunch was just 5 minutes up the road in Porangahau and we got there right on schedule - but unfortunately missing out on some of the planned action. 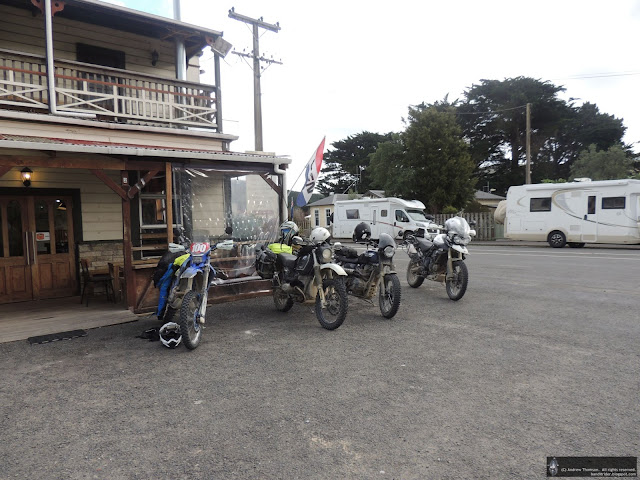 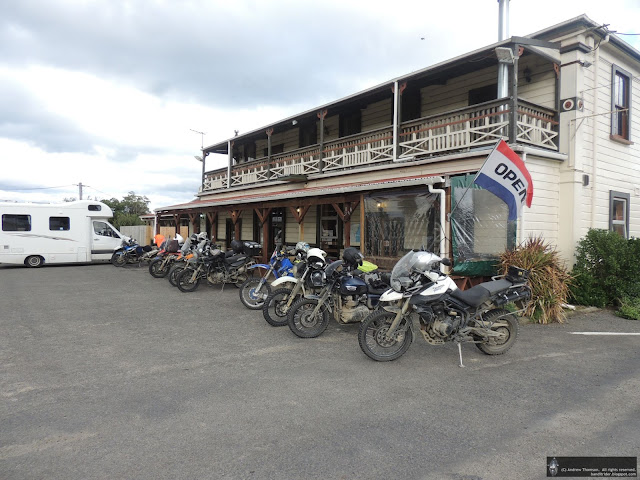 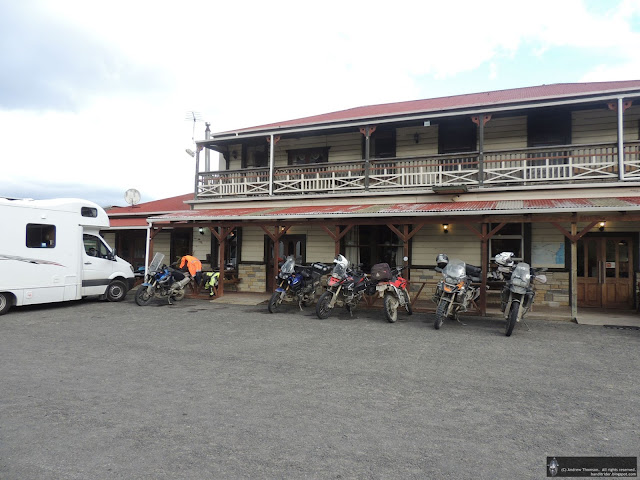 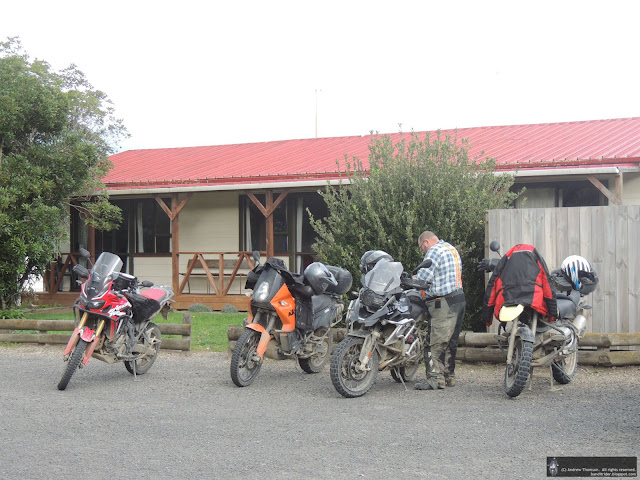 After everyone was fed and watered we remounted for the shorter afternoon stint back first to Dannevirke, then Palmy.


The only section of gravel after lunch was Te Uri Road but it is a cracker.  It started off with a sprint up a hill and then winding its way through the hills until we hit seal again.  Life is tough.


Along the way there was time for one last photo stop. 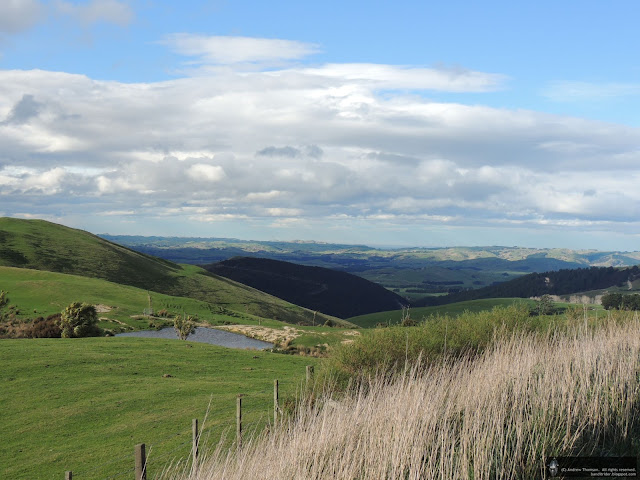 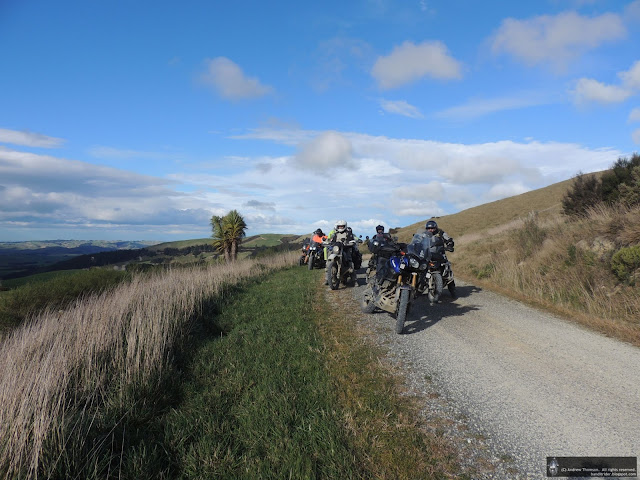 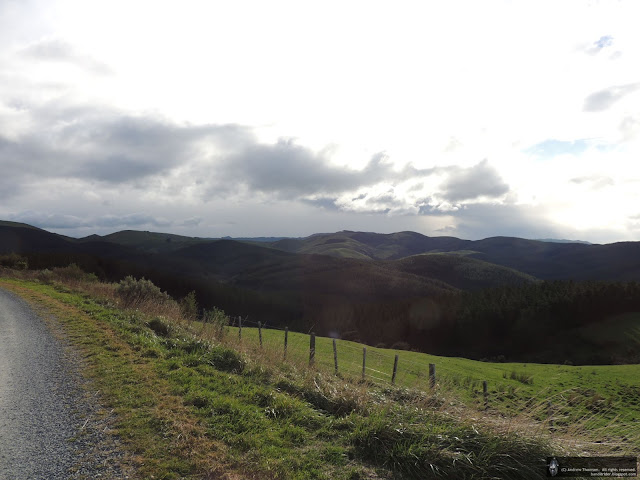 Saying goodbye to the gravel there were still some neat back roads to get us back over onto the Weber Road.  I particularly like the views going up Mangahei Road.


In Dannevirke we stopped for fuel and said goodbye to a few of the riders with just the stragglers pausing for a coffee before the final run home.

The trip back to Palmy was via my usual back roads and it was just a little exciting - the roads were slippery in places and the wind was pretty gusty from some angles.  A trip over the Saddle got us into Ashhurst for the final run into town.

In town we went our separate ways, but just for a while as we met up again alter for dinner at a local pub - not a bad way to end the day.

Fabulous to be able to show some out of towners around the place a little and I think everyone had a blast even if they got a little wet.  May have to do it again sometime...

...are great things.  They occasionally magically appear on the doorstep and contain farkles...

To kill the suspense that must be bugging you by now - it's a new tank bag.  Before the TT2000 I attempted to buy the one I wanted in NZ but the supplier could not get the tank mount for me in time so I left it until now.  In the end FC-Moto had a wee sale on at Easter and I managed to get it shipped to NZ for slightly less than it would have cost me in NZ so that was a wee bonus.

Now for the install.  New bag from a different manufacturer meant a new tank fitting.


The Givi system is slightly tidier than the SW-Motec one and I hope it is a little more reliable than the SW-Motec one - I have had the locking pin pull out of the mount twice leaving the bag stuck to the bike...Luckily I've been able to fix it each time while on the forecourt of a petrol station...

The next job on the cards was to get power to the bag for charging my phone, cameras and intercom.  This time around I just decided to install a dual USB socket and haven't bothered with the 12v socket that I have in my other tank-bag.  There is a pass through in the bag so it was easy to get the wires into the bag.  I gave myself plenty of extra wire too so I could perhaps pull the wire through into the map pocket of the bag - time will tell if I need that.

Now for some more about the bag.  I did a little research on the Tenere forum to see what other guys were using and in the end opted for the Givi XS308.  Here's some of the specs copied from Revzilla: 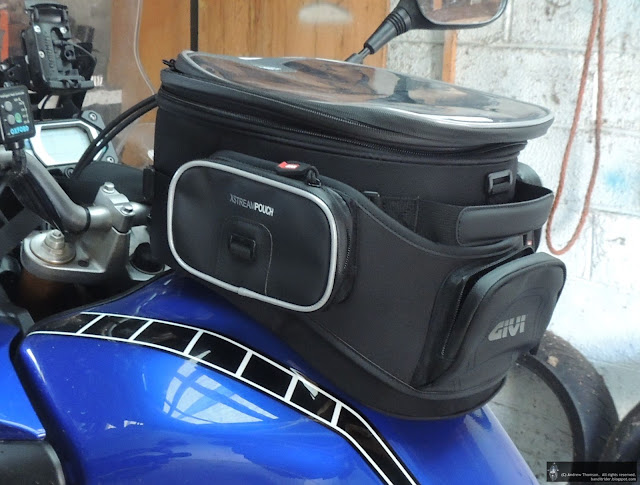 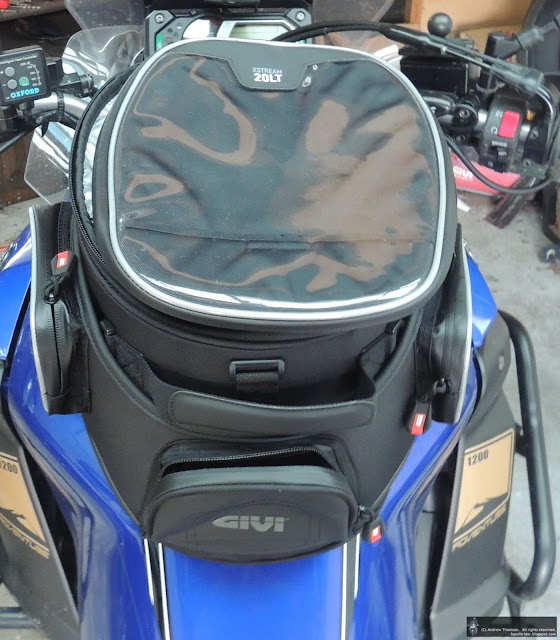 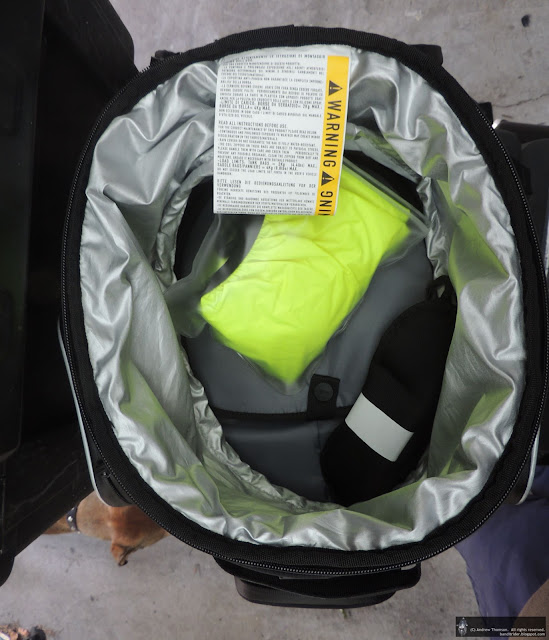 The warning sticker in the above picture is already gone and the waterproof cover has been moved to one of the little side-pockets.  I've also shortened some of the straps so that I don't have excess flapping around and getting in the way.

And this is why I got it:

My idea is that the bigger bag will easily take my camera and TT T-shirt and maybe make those photo stops just that little bit quicker...I'm sure the 0.01seconds saved will add up...

Oh, and Happy Birthday Tenere - two years and about 26k lugging me around the countryside.
Posted by Andrew Thomson at 11:23 am 10 comments: