So Saturday's ride was a bit chilly at times and my poor old hot grips were given the workout of their (long) life.  I've talked before of my undying love of heated grips and that they're cheaper than a pair of gloves etc, etc.  They are the bees knees.

And the Connie's Oxford grips have certainly done well.  They've been on the bike for nearly 148,000km and apart from a plug popping out have never missed a beat.  I've also bought quite a few pairs of gloves in this time...

But, for a while now they (or at least the LHS side grip) have been showing their age: 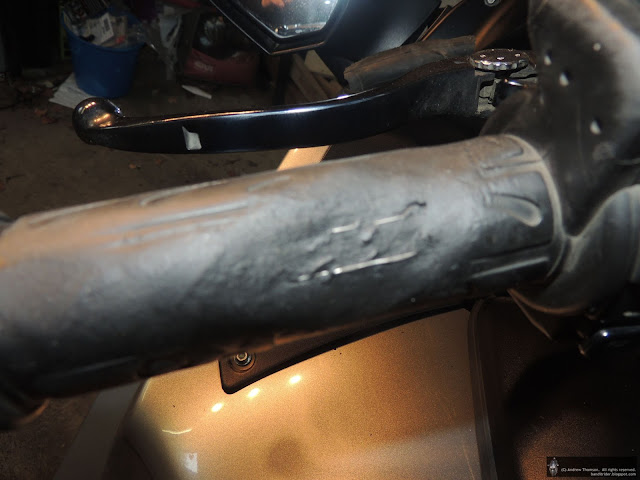 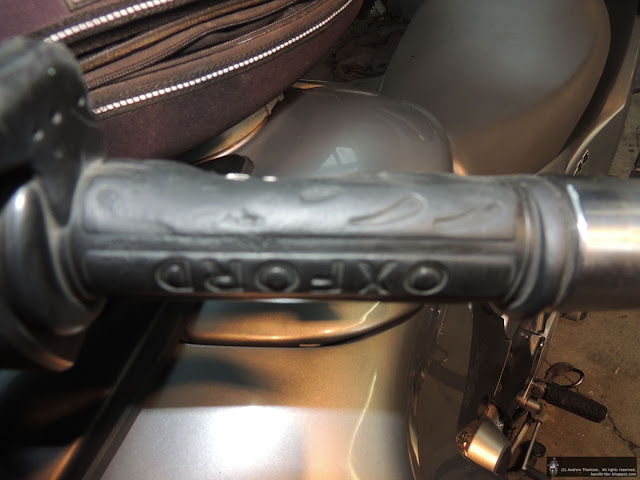 So, last week I found the best local deal and finally ordered a replacement set.  They arrived on Thursday and I didn't get a chance to fit them before the weekend and with Saturday being the better day, the ride took priority.

But come Sunday, it was time for some shed time.


Replacing the grips is a pretty easy job, only the right grip was hard to remove (in the end I had to sacrifice the old one) and I didn't even need the wiring to the battery (although I think it is hooked to some accessory leads that the Connie came with), I simply plugged the old wire into the new controller.

Once again the right grip was the trickiest to get on - and you need to be quick with the glue going off pretty quick...And then hey presto, all done!

Now, the next job is to get the ones on the Tenere to work every time...I am onto the source of its issues, just so long as I get it sorted before summer...
Posted by Andrew Thomson at 7:10 pm 10 comments:

Saturday was a fantastic day in Palmy and with Sunday supposed to be bringing a change in the weather then I needed to use Saturday for my important battery charging - the poor old Connie hadn't even been fired up in ages...

So, my route talk me across Vinegar Hill and then onto the dreaded SH1.  Vinegar Hill was fun and even the traffic lights on them played ball for me (but not the half a dozen cars waiting at the other end) as I enjoyed reasonably dry roads and plenty of nice corners.

For my SH1 leg I settled down a little and just enjoyed the cruise in the sunshine.  Naturally as I neared Taihape and Waiouru the temperature dropped but hey, I had the heated grips on.  Then, North of Waiouru, the temperature dropped even more and the skies started looking a little unfriendly.  I then had my first brain wave of the day - why not stop and put my warm/waterproof gloves on?  So I did.


Immediately upon stopping and removing my summer gloves I couldn't help but notice that it was absolutely freezing cold.  My brain was ok though as I had another great idea - wet weather gear!

Wow, two good ideas in a row.  By the time I finally got my warm gloves on and got back on the bike my hands were blocks of ice.  The grips were turned onto 100% (probably for the first time in 147,000km) and I hunkered down as I headed off into some light rain.


So, the pictures do not do it justice.  It was freezing - it took 15 minutes before I could even feel any warmth from the grips and the tips of my fingers were frozen.  The inside of my visor was fogging at the edges even with the pinlock and breath guard fitted and the chin vent open.  I haven't ridden in weather this cold in a number of years (and that's including my snow rides on the Vee & Tenere) and I don't know why it wasn't snowing.

Anyway, once I stopped worrying about my hands I started enjoying the ride.  Bits of the desert road can be fun and the tyres were being their usual grippy selves so I just got down to business.  And then I met this person...


This person should not be allowed to have a car or perhaps even oxygen.  On slow vehicle lane #1 they simply pulled out as if to pass the slower traffic in front and forgot to pass it.  They did not appear to know what the thing under their right foot was and got nowhere fast.  They also had the pleasure of holding me up.

Then we hit the next slow vehicle lane.  Rinse and repeat...This time around though, they noticed that there was a big truck in front and that perhaps it was worth a crack having a go at passing it.  Unfortunately it had taken them so long to work this out that when they started their passing manoeuvre they had already passed the sign saying that the lane was about to end.  Yes, the truck pulled out into the main lane, yes there was oncoming traffic and yes, the idiot had to hit the brakes and find a piece of unoccupied road...

Having just managed not to have got caught up in someone else's accident I was glad that I made it to slow vehicle lane #3 where horsepower was applied.

Leaving a moron in their Honda behind it was nice to finally get into some waremr weather as I dropped down towards Turangi.  But rather than visit Turangi, I turned off at Rangipo and headed for the other side of the hill.

For the first stretch across Sh46 I pretty much had the road to myself and the weather just kept on getting better.

Joining onto SH47 though I found the traffic - and most of it was going the same place as me.


Where everyone was going was "up the mountain".

It being winter and all I'd decided to see how far up I could get before they made me put on chains.  But, unfortunately they'd shut the road, so chains or no chains I wasn't getting any further than the Chateau.

Quick snaps taken I remounted and dropped back down the mountain road and pointed towards Raetihi for a late lunch.

Lunch (and dinner) eaten I filled up the bike and made for the Paras.  And boy was it good.  Even though it was winter and I needed to tread carefully in some corners, the ride was just a ball.  Rumour has it that there is video of the ride but I don't think you'll find it on Youtube.  I did however, manage to get a few pictures along the way - perhaps they can tell the story?

By the time I got to Upo I'd managed to warm up quite a bit and the screen was even down a tad for some fresh air - grips were still on 75% though...

The trip home through Okoia, Fordell, Turakina etc was a chance to ease up a little and I ended up home in time for a cuppa before finally lighting the fire.  A superb day out even if it was very cold in that middle part...