It seems like forever since the Connie had any decent sort of exercise and today I thought that it was time to take her for a small skid to top up the old battery.  My battery also needed a bit of charging too...

I left home just before 11 and though it was a bit of a grey old day, it was not cold and the rain looked like it was going to stay away - just a few damp roads on my way across to Colyton and on up to Cheltenham.

Carrying on to Kimbolton there was the odd spit but nothing serious with the PR4's not having any difficulty coping with the damp spots and the odd bit of metal on the road. 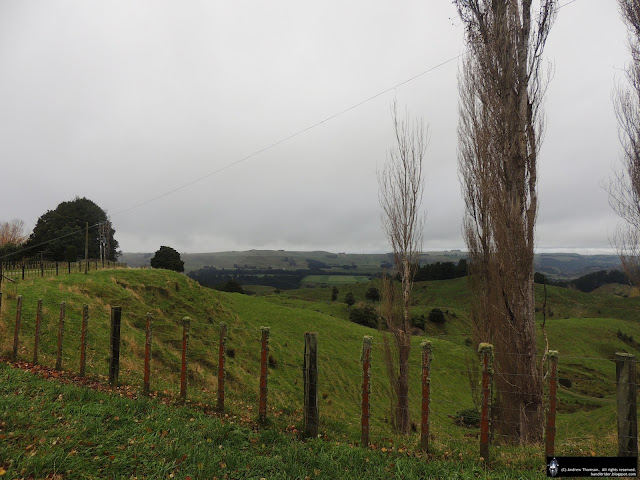 With not a lot of fuel on board I decided to turn-off at Pemberton and cross over to SH1 at Ohingaiti to make for food and fuel at Hunterville.  Mangamako Road was damp in places and I even had to negotiate mud on a few corners where slips had not quite been cleaned up properly - no warning signs out either... 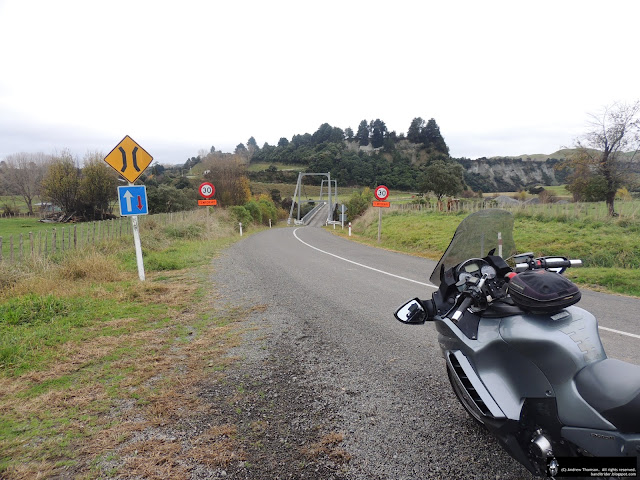 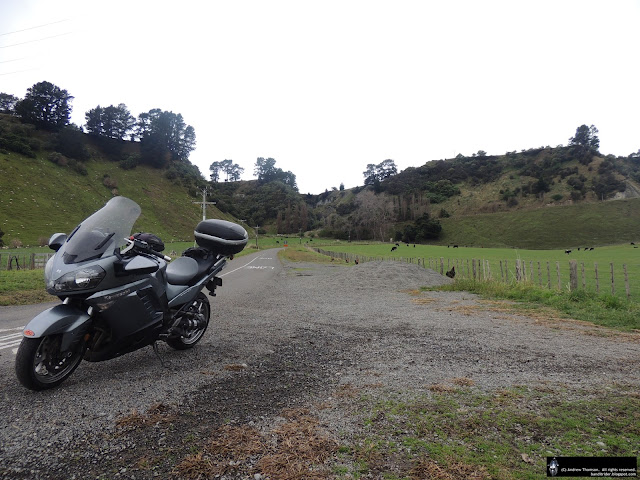 In Hunterville I had a fairly quick stop for grub and fuel before doubling back a little to take on Vinegar Hill.  I haven't done the sums yet but I'm guessing that my economy may have suffered over the Hill, but the bike seemed to enjoy it as much as I did - nice to be out of the house and out on the silver horse.

All that pressure from the Long Distance and Adventure riders finally overcame my prejudices, misgivings and sense of taste - I bought a BMW...

So hopefully this one will prove to be economical and reliable...

Actually it was a pretty neat way to kill 4 hours or so on a crappy day and I just wish they made a Tenere or Connie...

And now for a brief puppy update...someone is doing a great job of converting her tucker into more dog and is also making a reasonable attempt at learning the rules of the house.  Still no sidecar on the horizon though...

Yay, this afternoon I got to get in just a little gravel fix with a trip across some favourite gravel roads to Apiti and return.  But first...

It was time for the Tenere to have a little birthday present (slightly late) in the form of some fresh oil (donk and diff) and filter.  The apprentice was no help whatsoever - climbing all over me while I removing the bash pad and chewing on my ear was not as much help as you might imagine - but I seemed to get the job done ok.

Job done, lunch inhaled and vicious apprentice fought off, I geared up and hit the road.  Riding out of town it looked like I was heading in the right direction as there was plenty of wet looking stuff off to the South while I went the other way.  I did manage to find some rain on the way to Ashhurst and there was the odd spit as I turned off up the valley.

My first bit of gravel was an old favourite on Pohangina Road and all the rain we've been having had settled the road down nicely.  It's generally a really fast and fun bit of road but corrugations are starting to form on the climb out of some of the corners - only a matter of time before someone dumps more gravel down. 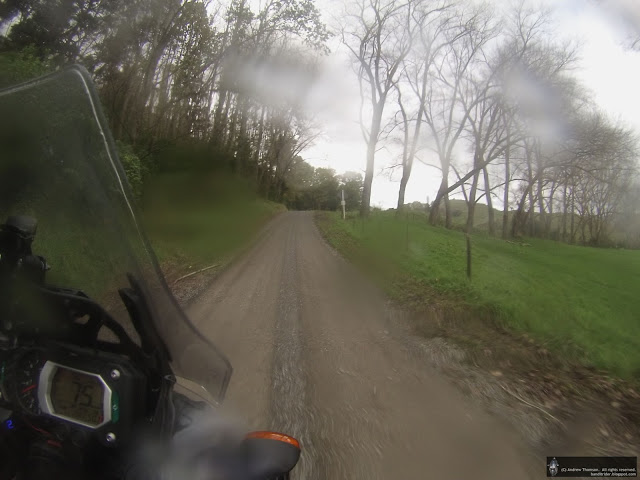 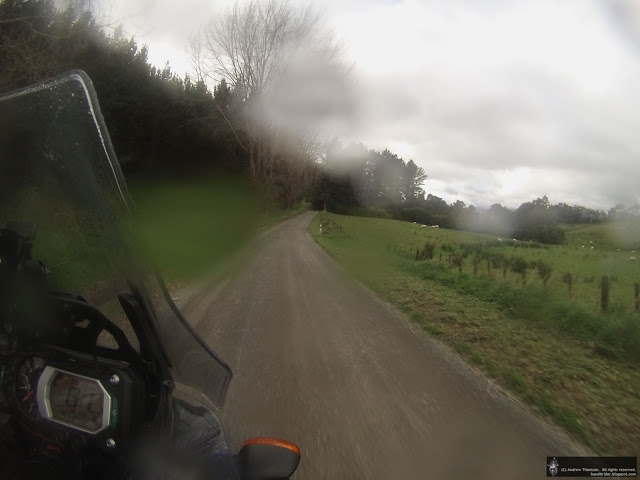 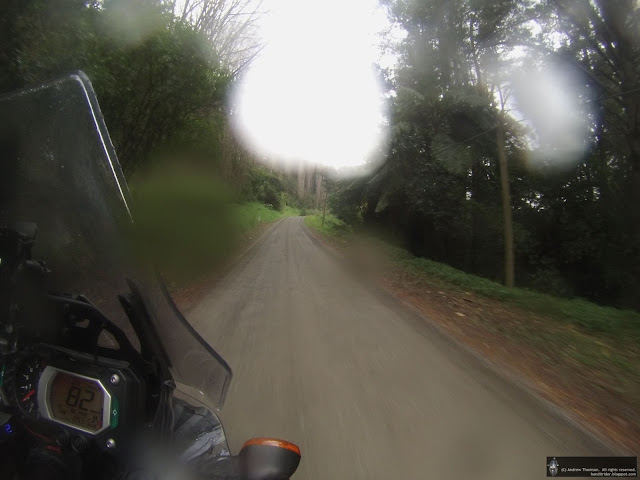 There was a bit more tar work after the Totara Reserve turn-off before once again climbing up a bit on some nice gravel. 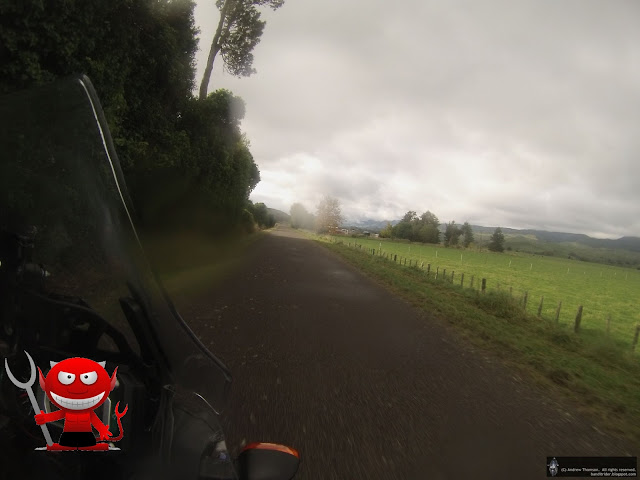 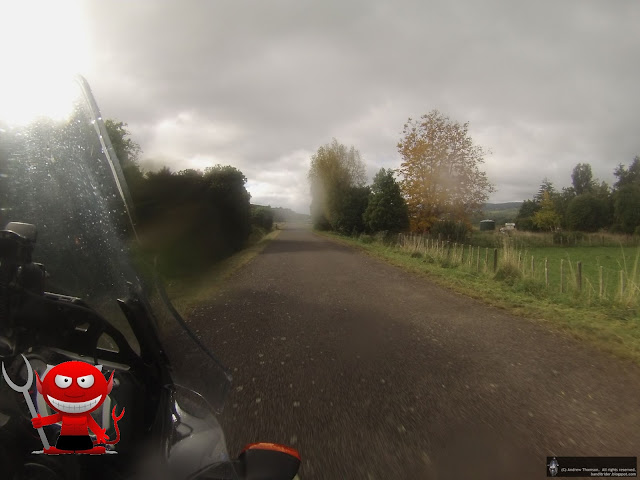 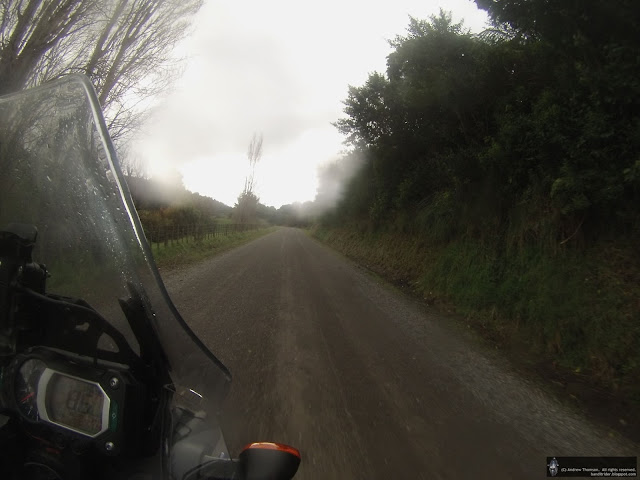 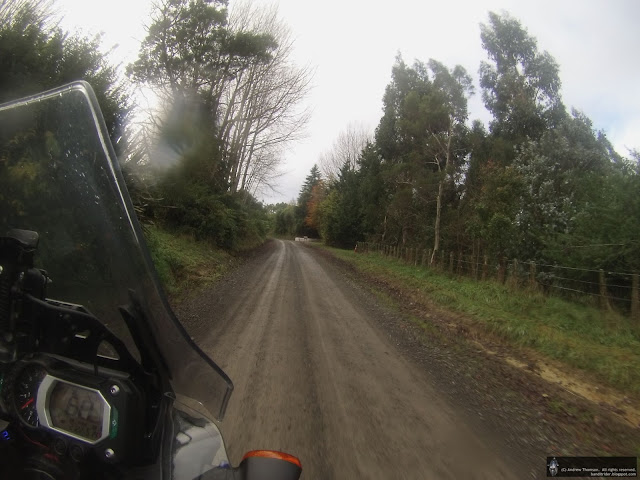 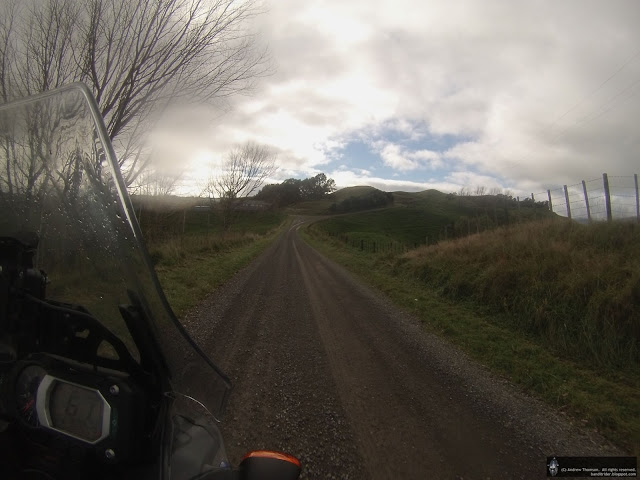 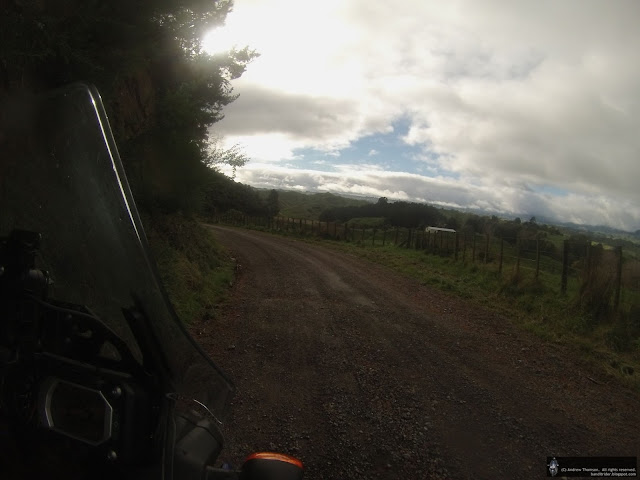 At Makoura Road I turned left to cross over to Apiti and ran into some interesting riding conditions...a grader had been through and churned up the road a bit and then all the rain had softened things up a bit.  A little care was required... 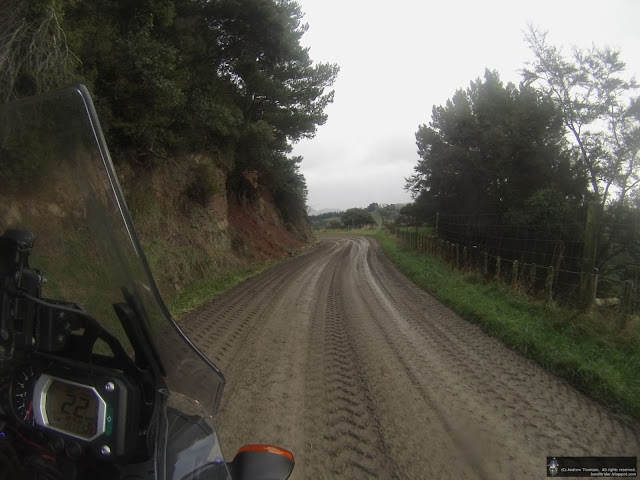 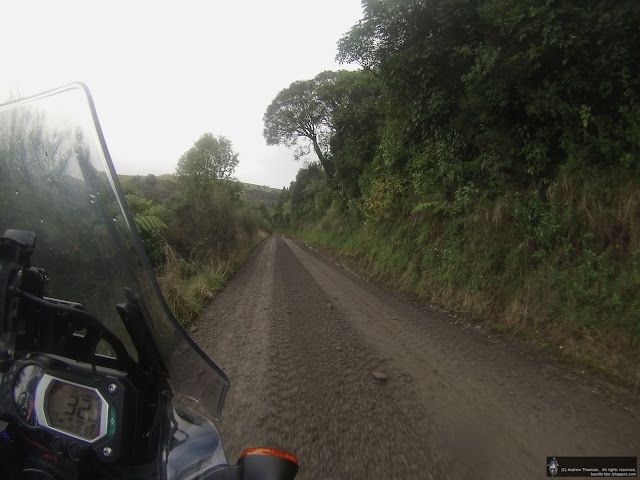 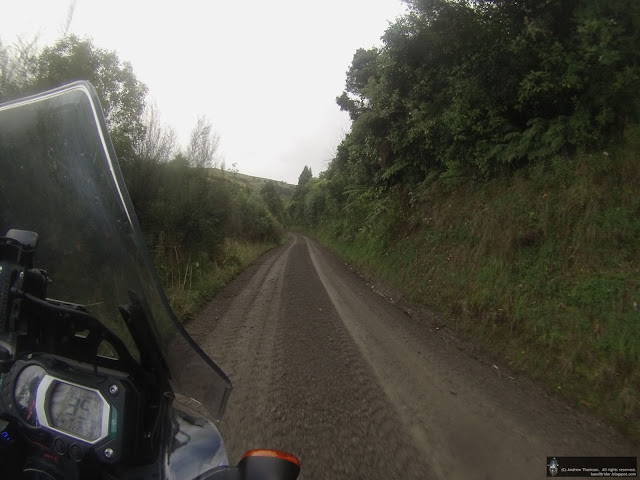 At the bottom of the hill I stopped briefly to get the obligatory picture of the beast. 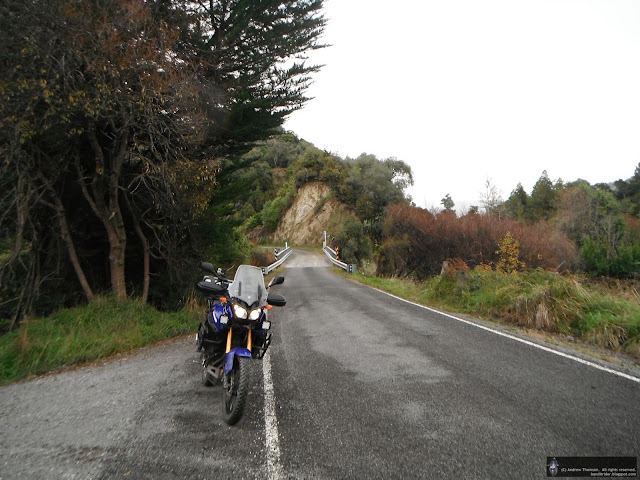 And then there was a surprise in store for me.  Rather than a rough gravel climb back up the hill, someone had been through and sealed the road!  Spoil-sports!  They'd even carried on a fair way across what was once a really cool, fast gravel section.  Luckily they'd left one last short section that I could have a little play on.

Nearing Apiti I discovered some weather so instead of returning home via Ridge Road as planned, I decided to cut the ride short, wimp out and take the sealed route home via Kimbolton. 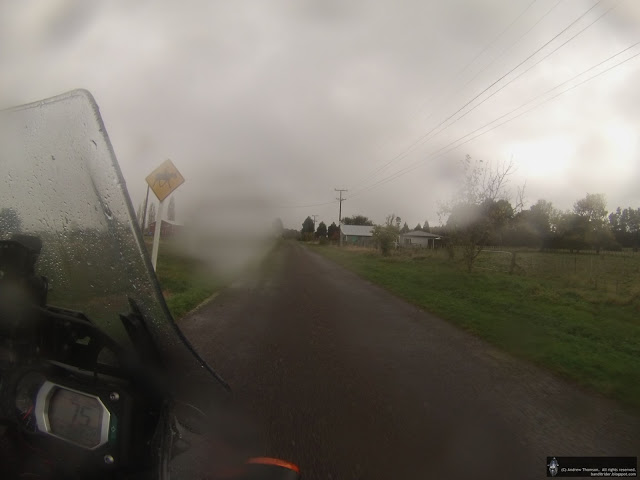 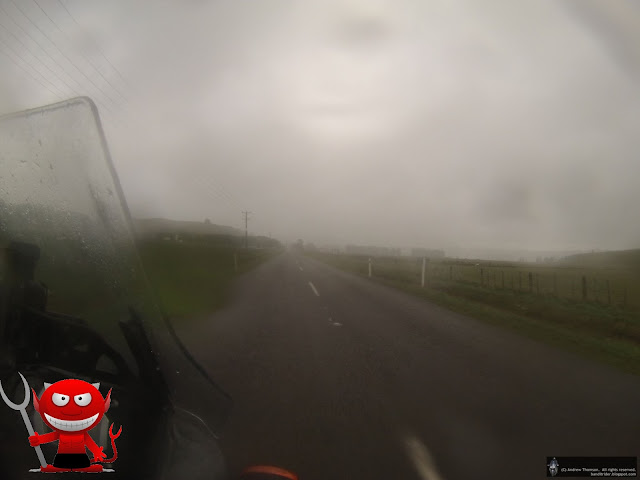 Luckily, I out ran the weather a little and it stopped being quite so damp not far out of Apiti and the run through to Kimbolton was pretty good. 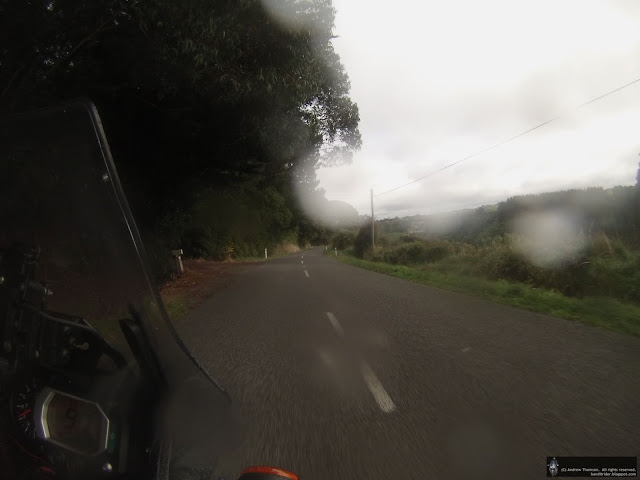 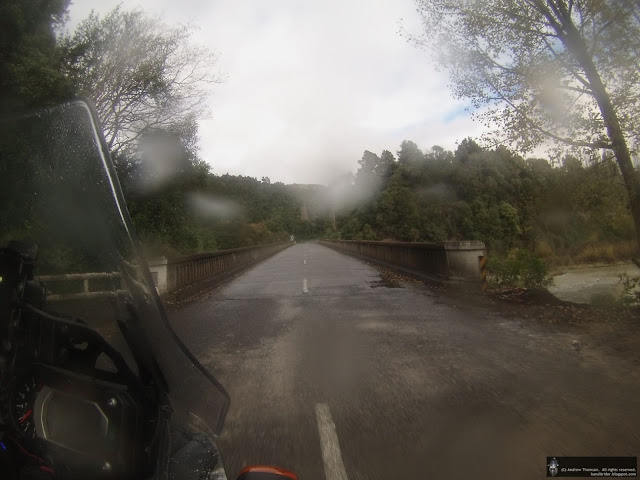 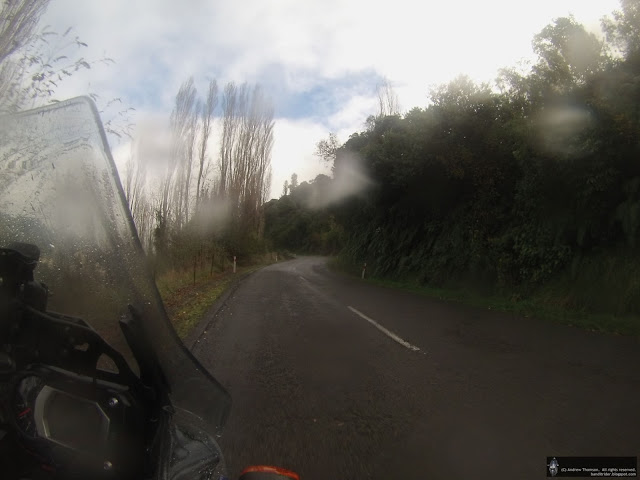 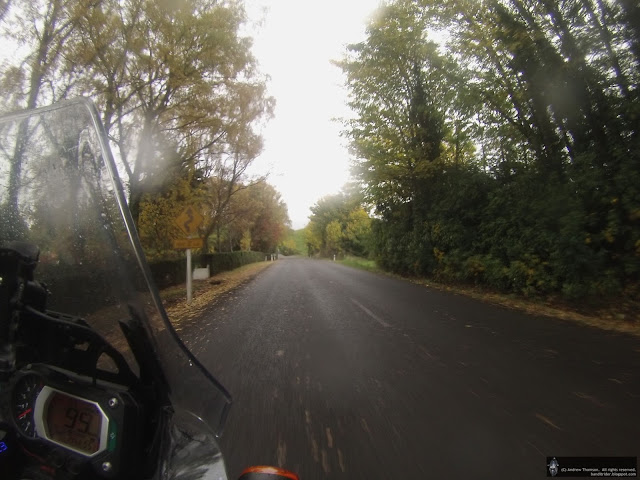 The rest of the ride home was fairly uneventful, just the odd spit and nothing to really complain about. 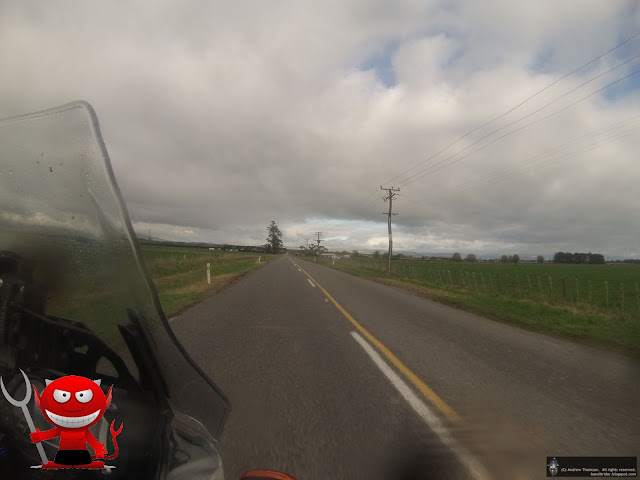 Home by 3pm and into a coffee after a nice little squirt on a reasonable winter afternoon...fire on soon...

Meet Honey who moved in a week or so ago and has yet to decide if she likes bikes...

She does love kids though:


And the meter reader:


But all the excitement eventually gets a bit much...


And she has something against ducks...


She's only about 3 months old so has plenty to learn but is picking up things fairly well.  Sharp teeth...
Posted by Andrew Thomson at 8:25 pm 6 comments: