Finally got the write-up done - ran out of words. Here it is:

http://andrew.l.thomson.googlepages.com/themini'sreturn
Posted by Andrew Thomson at 9:50 pm No comments:

Yep, he's beaten me to it! KoroJ has got his write-up all done and on his blog. It's a great read so check it out:

http://www.kiwibiker.co.nz/forums/blogs/viewblog.php?userid=9500&entry=417
Posted by Andrew Thomson at 8:57 pm No comments:

Yep, got home yesterday afternoon after a long hot ride down from Whangamata. Without going into too much detail (as I plan a major write-up for my website), we finished off the Mini's Return and got our badges etc and then made our way home via some small diversions.

Somewhere along the way my rear tyre started to slowly deflate (built-in tyre pressure sensors are great) and so after riding from garage to garage around the Coromandel we stopped in at Bay City Motorcycles in Tauranga where the guys soon had the puncture sorted and us out the door and on the road again.

While in Tauranga we heard that the Napier-Wairoa road was closed due to some kind of major accident so this put paid to our plans on doing the Waioeka Gorge and coming home via Gisborne & Napier. This meant that we just had a small ride down through Rotorua, Taupo (nice lunch) and home. Not quite as planned and it dropped our total distance down to just under 5,700km.

Still, we had a great time, really enjoyed the Mini's Return and the bikes went well as expected. I will post again when the website has been updated but in the meantime here's a slide show of our photos.
Posted by Andrew Thomson at 7:36 pm 1 comment:

My topbox mount came in while I was down south and Brian managed to grab them from the bike shop for me yesterday. I've just finished managing to get the sucker on and so will be able to use it for the Northern leg of the Mini's Return. Awesome! 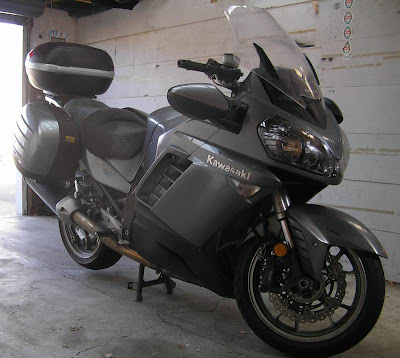 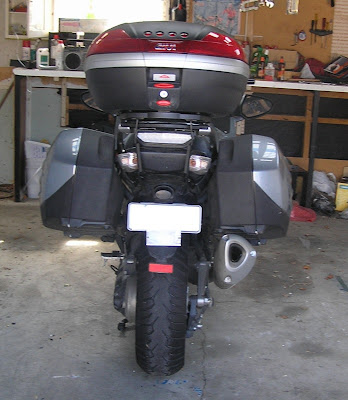 Posted by Andrew Thomson at 3:02 pm No comments:

Posted by Andrew Thomson at 9:21 am No comments: 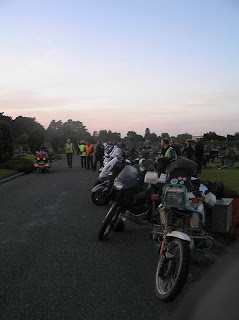 It's officially Day 3 of The Mini's Return but as we came back to Palmy last night and don't have to be in Wanganui until 7am tomorrow morning it's a day off for Mark & I. So here's a brief run down on the ride so far -there will hopefully be more on the website once the ride's all done & dusted.

We were up early and at the Invercargill Cemetery by about 07:30 and raring to go. Once everyone else had turned up we got the usual speech & instructions from Lee Rusty and then everyone was charging on up the road.

We stuck with a small group of riders all the way to Dunedin where we found the Octagon & the first checkpoint. We grabbed our flags and hit the road, back-tracking to Mosgiel to take the road through to Middlemarch. Mark, KoroJ and I had a blast through here and the grins were a mile wide when we stopped for gas at Middlemarch.

On the road again heading for Ranfurly and man was it hot. Later on Koro told us that his ambient temperature gauge had hit 32 degrees and never gone lower than 27 - hot work. From Ranfurly we made our way onto Alexandra and then Cromwell for the 2nd checkpoint. Grabbed our flags and hit the road again.

A quick stop again in Wanaka for fuel, drink & food and we were into the really good stuff. We had another photo stop alongside Lake Wanaka before hitting the Haast Pass. 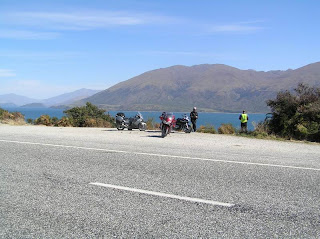 After the stop Koro set a swift pace and we ate up the road stopping just once to put on wets when it started to drizzle a bit. The drizzle stayed with us off & on for the remainder of the day with some quite greasy roads in places.

Mark & I made one last fuel stop in Franz ($1.98/l!) before realing off the final couple of hundred k's to Greymouth. We ended up doing about 1,000km in just under 11 and a quarter hours and arrived while it was still light - not bad.

Day two was always going to be a bit easier as there was a lot less k's to do and the roads were great. Arthur's Pass was absolutely magic - beautiful weather and of course the great scenery. We ended up at the Christchurch checkpoint just after 11am and then had 7 hours to do the 300 odd km to Picton! It was hot again and as we had plenty of time we took it easy and stopped whenever we felt like for a stretch, photos or just cause.

Caught the ferry back with Koro, the Hitchers and a few others and ended up home in bed by 00:40. Ready for the Northern leg now...

Posted by Andrew Thomson at 8:35 am No comments:

Wow, this is the 2nd camping ground with Internet access. Yesterday we left Omarama and made our way over the Lindis Pass, past Cromwell to our first stop at the Clyde Dam for some pictures. Following this we pottered onto Alexandra where Mark upset a bee so much that it gave him a sting on his eyebrow.

On the road again and into some beautiful country around Roxbrough where the weather was just beginning to change. By the time we hit Lawrence it was spitting so we stopped and had a nice lunch before putting on our wet weather gear and hitting the road again. The roads were quite wet all they to Balclutha where we stopped for gas and chatted with another biker heading for the Mini's Return start as well.

We then just rode down to Owaka for the night. This morning saw us cruising the Catlins and checking out Curio Bay before finally heading into Invercargill where the sun is fair blazing down on us. Today also saw Mark's Bandit in at Southern Suzuki for a new chain and front sprocket as the old chain was well and truly toast. Tonight we head over to Bluff to check in with the Rusty crew before the ride kicks off properly tomorrow morning.

Well, we've come as far as Omarama and are having a blast.

Yesterday was supposed to just be a short hop down to Kaikoura but when we got there at about 6pm all the camping grounds were booked solid - apparently there was some pig shooting competition on. So we had to press on and find a bed. Eventually we found a cabin in Cheviot, got a good feed at the pub and then crashed in our jail cell (not kidding - it was an old jail).

Today we were on the road at about 7:40 and turned inland at Amberly. After gassing up at Rangiora and searching in vain for some brekkie we headed on down the road. The first cafe with an open sign was as Cust so I hauled up the Connie and waited for Mark to stop, turn around and come back so we could feast.

Brekkie done we kept on eating miles towards Geraldine. The weather was a bit overcast and chilly but otherwise ok. Gassing up in Geraldine again we felt the first few spits of rain. We ended up getting a bit light rain of Burkes Pass. Once clear of the pass the weather improved 10,000% and the scenery was it's usual spectactular self. We had a few piccy stops at Tekapo and around the lake before heading to Mount Cook.

We stopped at Mt Cook for some more piccys & lunch. Said gidday to Sir Ed's statue and then it was back out the valley again. Trying hard not to doze off or speed too much we eventually made it into Omarama where we gassed up and then found a cabin for the night amongst a heap of Ulyseeians (sp).

Looking forward to heading back out towards the East Coast & the Catlins on Tuesday.

That's all for now...
Posted by Andrew Thomson at 7:50 pm No comments:

Yep, the Connie is loaded and I'm just twiddling my thumbs now. Suiting up shortly for the short ride down to Wellington to catch the ferry. Only going as far as Kaikoura today as we have plenty of time to get down to Invercargill for the start of the run. Really nice day for it and hope the weather behaves itself for the whole run. Will be back home on Thursday night and are having an off day on Friday so hopefully I'll get a chance to post something up.

Bye for now!
Posted by Andrew Thomson at 8:54 am No comments:

Dunno why I've never posted this link before. The link below takes you to the write up of Dave Jones from Aussie who rode a Concours 10,367kms in just under 6 days to prove that the bike was a true transcontinental tourer. A real awesome effort - not too sure how he managed it really...GC's would be an afternoon ride for him.

http://www.davojones.com/roku.htm
Posted by Andrew Thomson at 7:49 pm No comments:

Jeez i must be bored to bore you with all the details but anyway: bikes been washed & polished after it's service, tyre pressures checked, furry seat cover is on, boots, gloves & helmet polished up, new anti-fog dohickey fitted to helmet, maps sorted.

Just got to sort out what gear I'm taking (and how), load up the bike and I'm ready to roll. By this time next week I should be in Kaikoura or thereabouts.

What's that about a watched pot never boils???

The latest Rusty Trumpet is out and has the dates for next year's Southern Cross on it. 23rd to 28th of March. The direction is East Cape to Cape Egmont to Cape Reinga and then finally to Bluff. Better get my entry in...

http://www.rustynuts.co.nz/default.aspx?PageID=4
Posted by Andrew Thomson at 7:36 pm No comments:

A bit lame but anyway:

Posted by Andrew Thomson at 8:10 pm No comments:

And the Oscar goes to...

Cowboyz - for getting some great video of some of our local rides & riders (even me for a sec). All shot from his trusty ZX-9.

Posted by Andrew Thomson at 8:56 pm No comments:

Got the bike serviced today and had the recall work done. The recall work was simply replacing of the latches in the panniers and bolting a new rack on the back. Simple.

Surfing the net last night discovered that there have been a few issues in the states with bags coming off or getting damaged. Chatting at the bike shop today, we decided that it was probably rider error in most cases - not checking the bags were on properly or overloading. Some lawyer probably heard about a case coming off and started rubbing his dirty little hands together and hey presto Kawasaki decided to sort things out before they were sued into bankruptcy.

Anyway, job done and bike ready for action. Except for one major wee problem - the nice people at Givi Italy decided to have a bit of holiday (strike action) and my topbox mount is not going to be here in time for the Mini's Return. This is gonna throw a major spanner in the works and I'm really gutted and disappointed as the rack was ordered in November!

Not sure how I'm gonna carry everything I need. Strapping something on the back is not the best solution - it isn't secure and waterproofing could also be an issue. I'm currently looking to see if I can perhaps get a top plate that fits my box and modify it to fit on the standard rack (it's been done elsewhere), my only concern is that the proper rack has some extra bracing which may or may not be necessary. Not a lot time 'til blastoff so gonna have to get onto it...
Posted by Andrew Thomson at 7:46 pm No comments: