Yesterday I did something strange and slightly unbelievable - I gave both horses a bath!  I know, crazy, they probably didn't know what hit 'em! 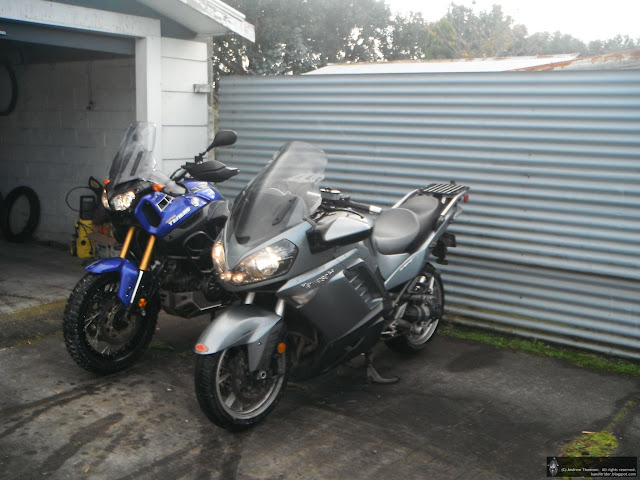 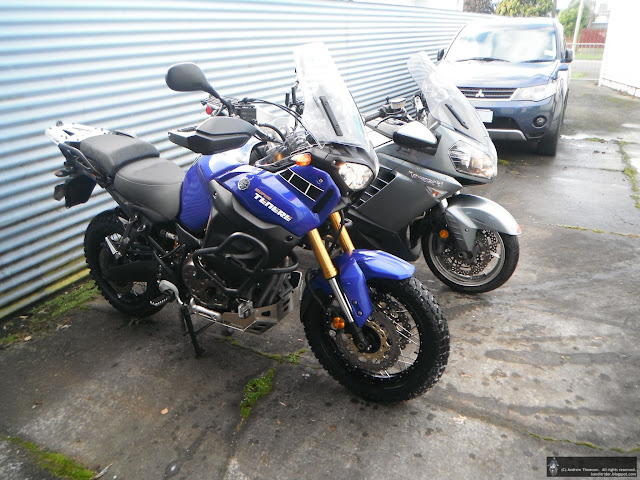 Anyway, today I decided that they were looking just a little bit clean (although I did of course, notice some bits I missed) and they both got to have a little exercise.

First up, there was a tag to get and I decided that the Connie was the weapon to get it.  About ten minutes after I left home the tag was in the bag. 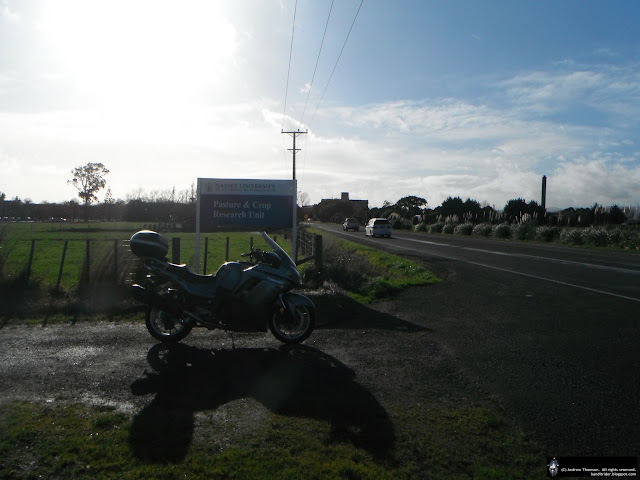 And then it was off to find something suitable for the new tag.  An idea came to me and after a short ride I took the pic below at secret location X. 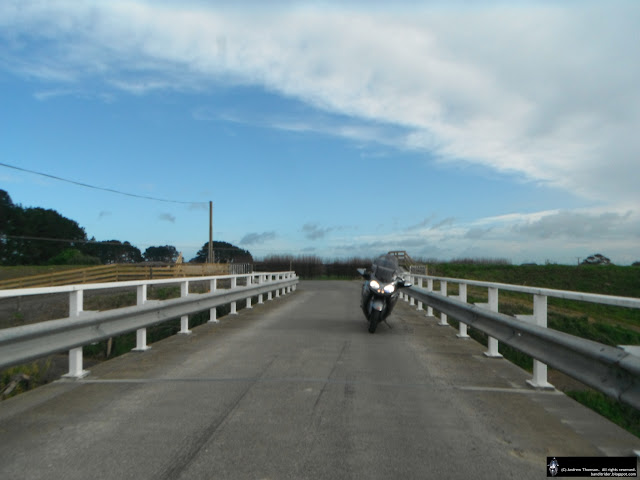 A short while later I was back home uploading the pics and then getting the S10 ready for her little outing.

After gassing up I pointed the bike towards Ashhurst and then on to Pohangina very keen to see how the new E-07's would hold up.  Pohangina Road was in superb condition and I daren't mention how well the tyres worked on the really hard packed gravel - we'll just say "well" for now... 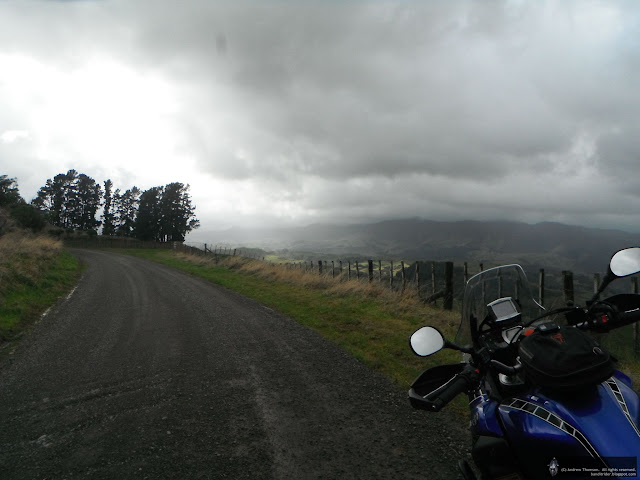 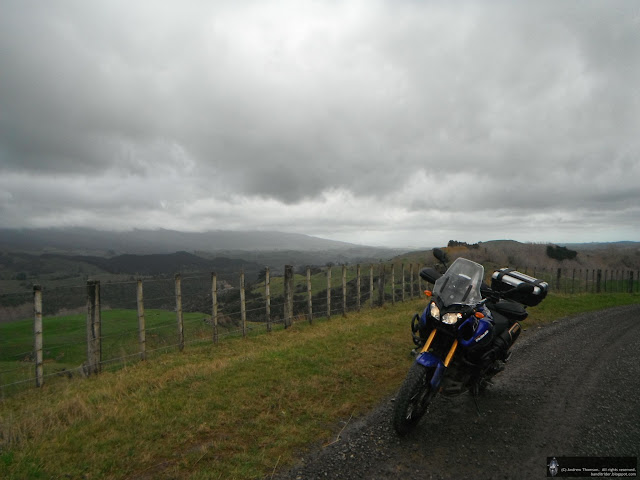 Pohangina Road eventually dumped me out onto Makoura Road where I turned left to make for Apiti.  Once again the gravel was nice and hard packed and the Tenere got a chance to use top gear quite a few times...


In Apiti the local MX-5 club had taken over the pub so rather than stop there for lunch with a bunch of hair-dressers (eh Geoff?) I decided to make for Feilding and a late lunch.  I good squirt on tarmac from Apiti to Kimbolton was fun even on wet and gritted roads was followed by a slow cruise into Feilding and a hot lunch.  Then it was home after a couple of nice little rides - just over 200km all up.

Well, I hope so after all the effort!

Today was tyre changing day on the Tenere - after slithering around all over the place the other day it was time to ditch the Tourances and slap on more familiar (and grippy) E-07's.

First up was the front.

After the wheel was off it was time to grapple with tyres.  Plenty of soapy water and my bead braking axe soon had the old tyre off and then it was time to put the new rubber on. 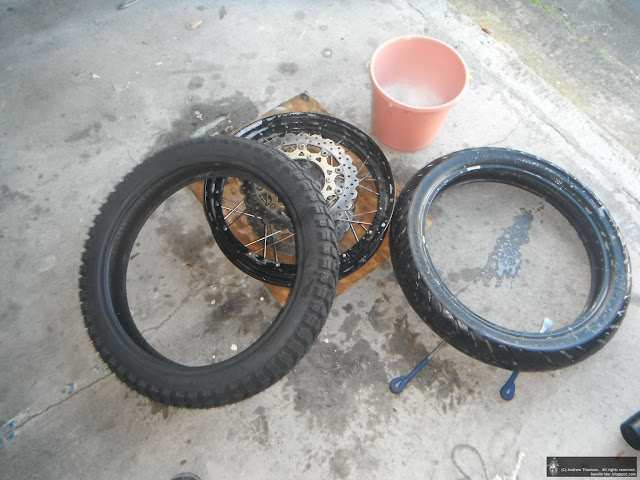 Lots more soapy water and plenty of grunting, hammering and levering eventually got the tyre on. 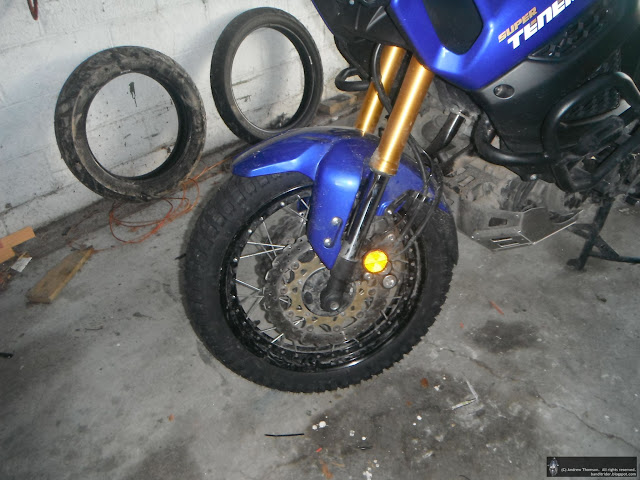 Next came main event - the other end.  Funnily enough, I'd never taken the rear wheel off so this was a learning exercise.  It turned out to be pretty easy although would have been easier if the cush drive hadn't decided to fall out and reduce the clearance for removing the wheel. 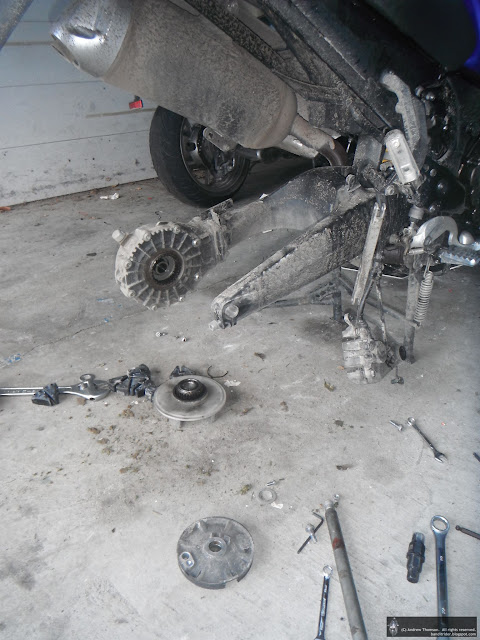 Once again the mighty bead braking axe was pressed into service and the tyre came off pretty easily.  Getting the new one on was a bit trickier.  One side went over the rim easily but at about 75%  on I struck difficulties.  Lots of soapy water, hammering and levering was put in practice but it wasn't until Mark popped in and was able to loan me those extra arms that I don't have that I finally got the sod on.  Mark did agree that it was a little tricky...

With Mark there the wheel install also went fairly easily although I was a little worried about the clearance you see between the swingarm and the washer in the below picture but it is apparently sweet as - I should have taken a before picture... 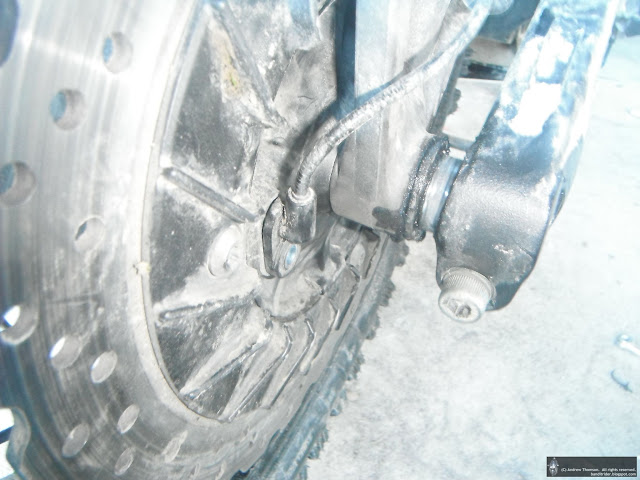 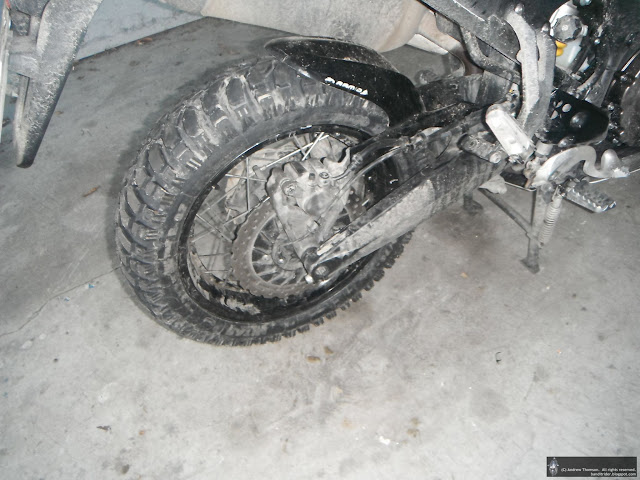 So, that's that done and I reckon for the last time in my shed...although I do have a set of PR4's laying around that need to find a home...
Posted by Andrew Thomson at 7:41 pm 8 comments:

Bought this by mistake... 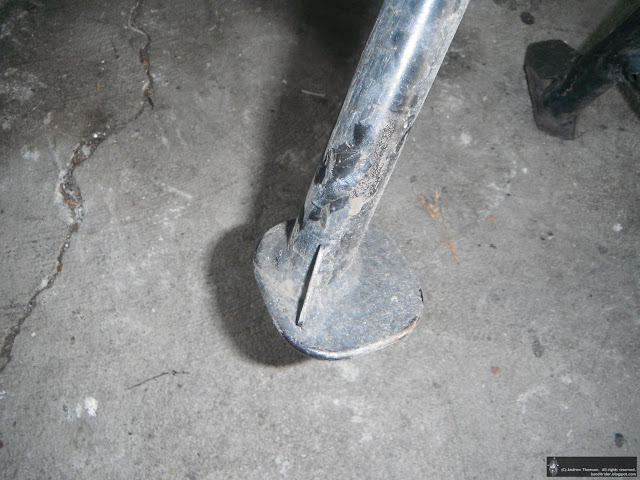 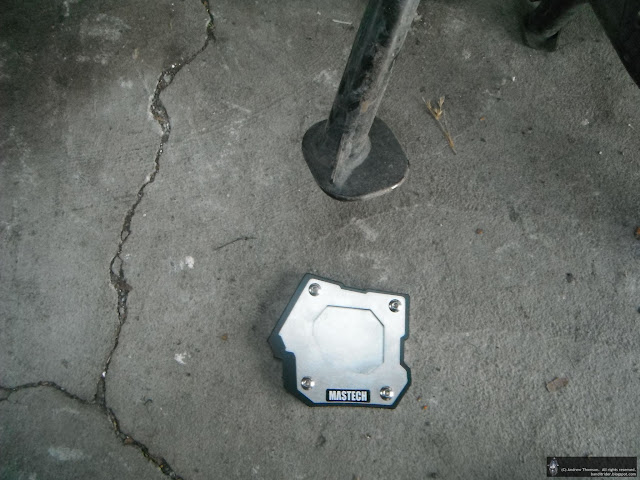 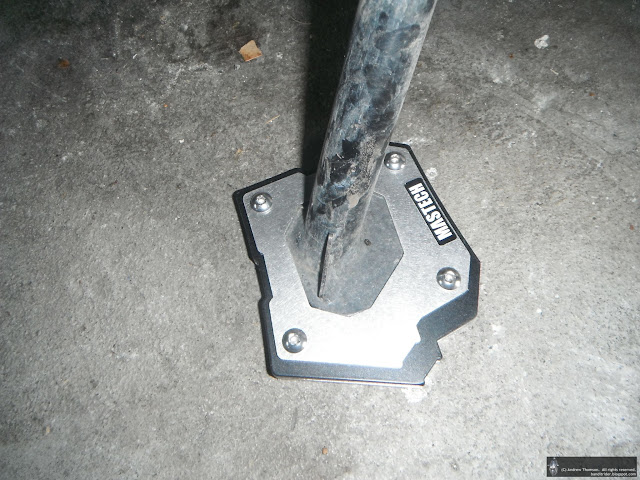 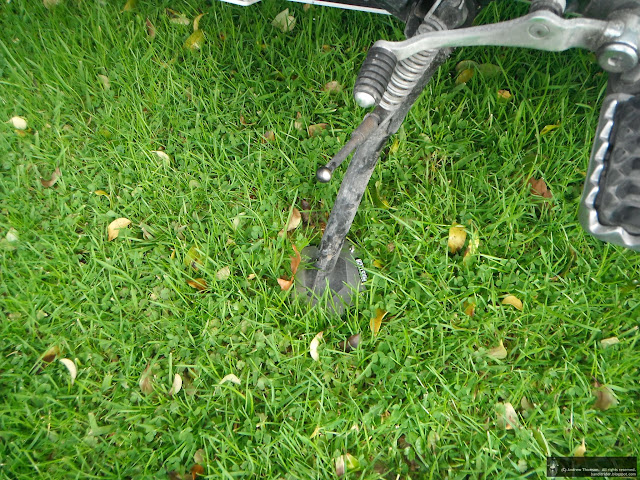 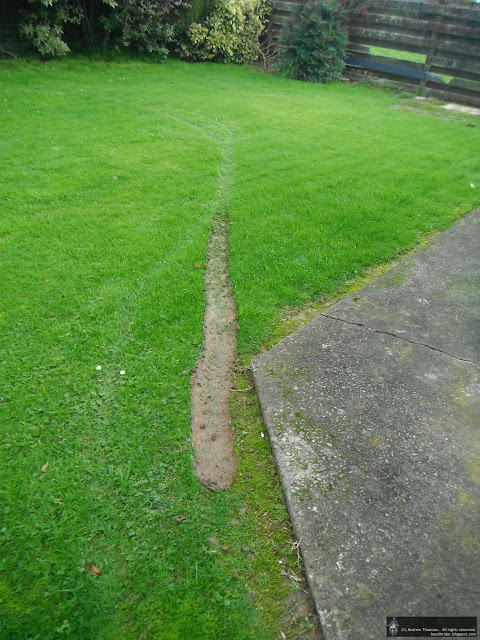 Yes, my back lawn is wet - even traction control can't help much... 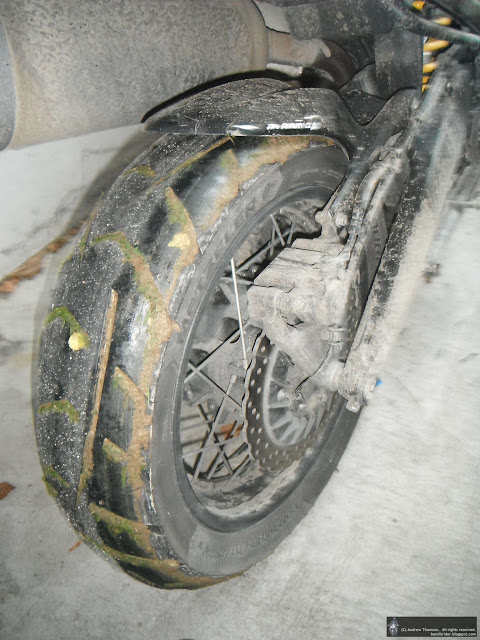