After our coffee in Hunterville several riders including our dusty leader made tracks for home but four of us still had not had quite enough excitement... 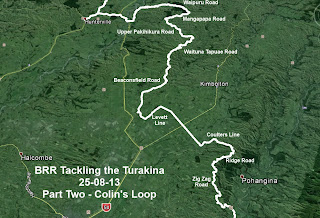 Colin's plan was to take us home to Palmy via another great selection of back roads.

First we rode North a little on SH1 before turning onto Vinegar Hill.  But no, we weren't to enjoy a fang over the Hill, we soon turned off onto the gravel of Sandon Block Road.  This bit of road starts off fairly open before starting to wind around the sides of the hills.  Once again plenty of nice views out across the countryside but unfortunately no video or pics to prove it...

Waipuru and Mangapapa Roads offer more of the same and although it can be a bit soft in places where the trees shade the road, on this occasion things were pretty dry and in good nick.

Next up were Upper Pakihikura and Waituna Tapuae Roads which took us on a climb up and over into the Beaconsfield Valley. 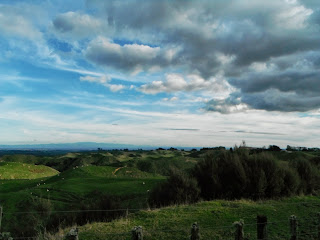 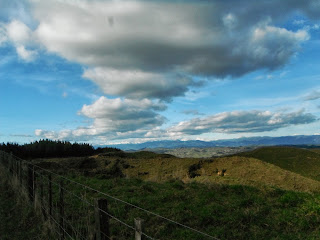 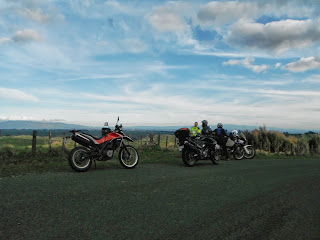 After a short, tight section of gravel Beaconsfield Road switches to tar seal so after a temporary navigation error we took Haynes Line to some more nice gravel on Levett Line.  Levett Line took us to Kiwitea and our last leg over towards the Pohangina Valley.

Coulters Line initially is sealed but it soon turned into some exciting gravel.  The gravel was reasonably deep and there was a few larger rocks in it but I found that the Vee was able to dig into it and really enjoyed gassing her up the hill while chasing after Colin - the rear end of the bike was hardly ever pointing in the same direction as the front...

Coulters Line led us up onto that other Ridge Road I mentioned in Part One and this is always a neat ride.  Recently a rally had been through here and although in some places the graders may have been tidying things up there were a few awesome sections where the gravel had been spread around a bit by the cars and the riding was outstanding.

Our last bit of gravel was on Zig Zag Road and although the low sun was a slight issue in places it was still a great last squirt on the gravel.  The remainder of the ride was just a quiet tarmac pootle into Ashhurst and then onto Palmy and home by 5:30.  One heck of a great day out yet again!

BRR Tackling the Turakina Part One

Yes, another two-parter and action packed too! 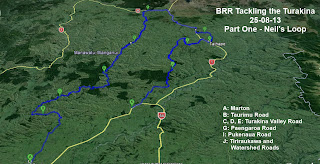 This month's BRR ride started in Marton and after a quick ride over from Palmy I fueled up (at the wrong petrol station) and met up with the rest of the guys for our briefing.  This month we even had a new rider with exceptionally good taste join us to sample some gravel: 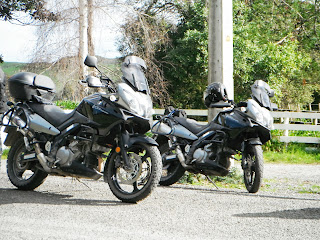 From Marton Neil led us North for a bit before turning West onto Taurimu Road which would eventually take us to Turakina Valley Road and a great ride up the Valley.

But no sooner than we had hit the gravel Neil decided to give us our first bit of excitement when his Tiger decided that it needed a rest and threw itself down on the ground right in front of me.  Unfortunately my GoPro was not going so I didn't capture the action but I can confirm that there was plenty of dust and the RHS foot-peg did a good job of creating a furrow in the road.  Luckily Neils gear also did a good job and after some choice words he was up and checking the bike out.  The crash bars and bark busters also did their job as the Tiger only required a bit of straightening to the rear brake lever to get it ready to rock again.

That little diversion out of the way it was time to carry on - this time with the GoPro running...


As mentioned earlier Taurimu Road spat us out onto our first section of Turakina Valley Road.  This small section of road I've ridden plenty of times - even on the Connie and some of my other road bikes - but it was still fun chasing Neil through this first short section of gravel.


As you can see from the map below Turakina Valley Road zig zags all the way up the valley.  During it's wanderings there are sections of sealed road but probably more gravel overall.  It is great riding and there is some pretty nice scenery to look at too.  We also had to avoid some turkeys, sheep and even a bull on the road in one place.  There were even a couple of other bulls having a ding-dong in a paddock near the road - noisy Adv bikes didn't even make them lift their heads for a second. 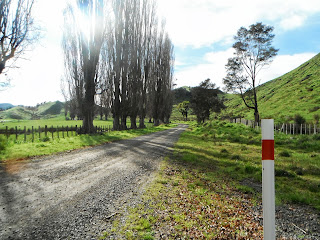 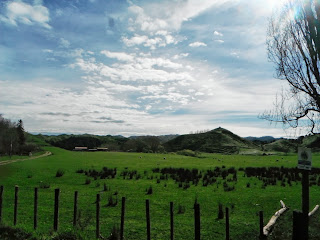 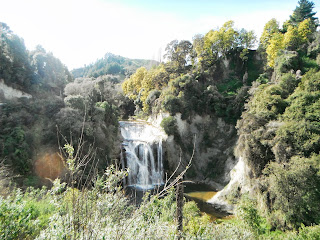 And if you were hoping for a lot of video, well unfortunately this next bit of Turakina Valley Road is the last video I got courtesy of GoPro (I think battery) issues.


Up towards the Northern end of Turakina Valley Road the road open outs a little with faster more flowing corners (and a spectacular view of Ruapehu - sorry no piccys) but this would also add some excitement to a few of us.

I was first up with a big front end wash-out coming out of a right-hander.  I was sure that I was going down but wound on some gas and kicked the road away from me.  Slightly sorted out I got around the next couple of corners but the front was feeling very squirrely and I actually stopped to see if I had a flat front tyre.  All was good on the tyre front so I was soon on my way slithering my way through the last of the corners before enjoying an awesome gravel straight that took me back onto the tar at SH49.

Stopping in Waiouru for a regroup the five of us soon realised that we were missing a few and waited a wee while before I remounted to go to see if we had another incident on our hands.  I'd just got out of Waiouru when the other guys past me going the other way - good stuff.

Unfortunately though, the delay had been Peer on his 1200cc Panzer.  He had had a similar incident as me but unfortunately he'd ended up dropping the bike.  I'm guessing that as tail-end Charlie he probably had a little wait for the rest of the guys to realise and come back to help him recover his machine.  Once again no injury and no damage to his battle-tank so all good.

From Waiouru we pretty much main-roaded it to Taihape except for one short piece of gravel on Paengaroa Road and some nice tarmac twisties on Spooners Hill Road.  In Taihape it was time for a well earned lunch to fuel us up for the afternoon's adventure.

After lunch we headed North out of Taihape before turning left for the great climb up Pukenaua and Ridge Roads (a different Ridge Road than the one nearer to home).  There was no snow and ice this time around, just good gravel and a nice sunny afternoon to enjoy and at the bottom of Ridge Road it was time to turn South to take in Rongoiti and Tiriraukawa Roads. 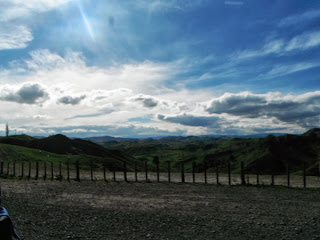 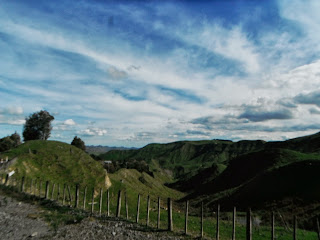 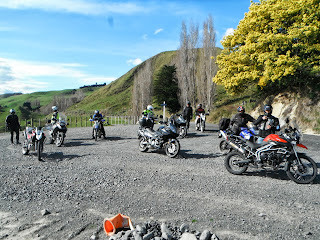 Our next bit of gravel was the fabulous Watershed Road which is always a lot of fun with some tighter sections along with some more open and faster bits making it a great ride.

Back out on SH1 we cruised into Hunterville for a coffee and some fuel for Part Two...
Posted by Andrew Thomson at 8:14 pm 6 comments:

That's South Island dirt lying in the bottom of that puddle...it's been a while.

Email ThisBlogThis!Share to TwitterShare to FacebookShare to Pinterest
Labels: V-Strom

After getting over the cold that I had last weekend and spending the week staring at a new helmet that hadn't be worn yet it was nice to be able to get out for just a short ride this morning.

Rather than head off on a major excursion I decided to go for just a short ride to get a picture for a thread I've been following on ADVRider.  I'd noticed the below wall mural on a trip through Foxton previously but didn't happen to have a bike with me at the time... 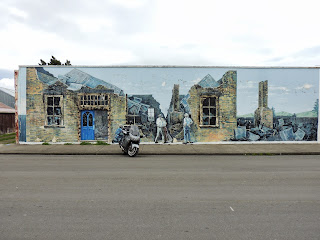 On the way in I noticed a couple more murals so had to double back to get them too. 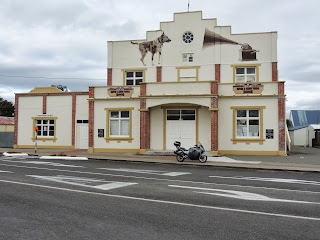 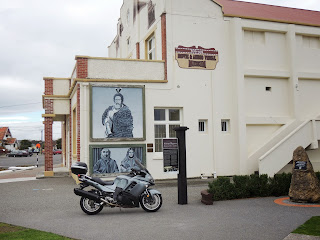 Leaving Foxton I decided to make a loop of my trip rather than simply retracing my steps so I scooted over to Shannon before crossing over through Opiki to home.  A massive journey of around 80km...

And yes the helmet got broken in: 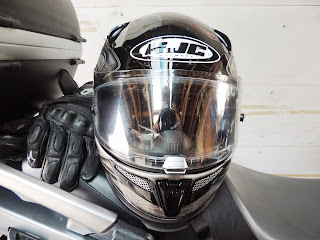 My old Shoei XR-1000 has been feeling a bit worn out for a while now so I've been kinda snooping around at new helmets.  A couple of weekends ago I test rode an HJC RPHA 10 Plus and then made a rash decision...

For years I've always just bought plain coloured (usually black) helmets but this time I ended up ordering one with the "Evoke" graphic.  A few days later it turned up and I have to say it is a great looking helmet that the pictures don't do justice. 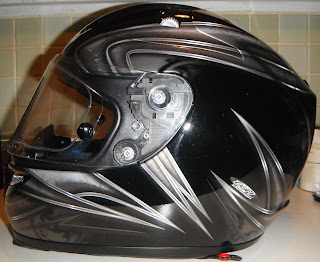 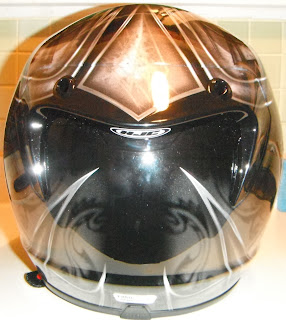 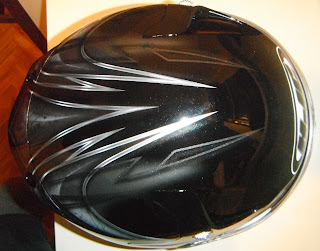 The helmet came complete with breath guard, chin curtain, pin-lock visor and a second tinted visor.  The shop are hopefully arranging to swap the very dark tinted visor for a lighter tint for me as I don't want to carry two visors with me or get caught out after dark with a dark tint.  I'd rather take my sunnies with me...

I haven't had a chance to break it in properly yet (hoping for a nice weekend) but the demo one felt good and was reasonably quiet - I did try it with my ear plugs on as I wanted to ensure that it was comfortable with the plugs in.  The controls for the ventilation took a bit of finding but are very easy to use once you locate them - more practice required...

Next step is to get some speakers into the helmet - there is not a huge amount of room but I have a couple of options.  I still need to be able to wear the ear plugs comfortably too.  I will post up my results and hopefully a ride report...
Posted by Andrew Thomson at 7:19 pm 8 comments:

Email ThisBlogThis!Share to TwitterShare to FacebookShare to Pinterest
Labels: Gear

So I was nosing around the old Autobackup folder in my Picasa web albums and discovered that not only was Picasa creating gifs of some of my pics but also stitching together some pics to make nice big wide panorama shots.  Some of them aren't perfect but others are not too bad at all.  I particularly like some of the one's from my South Island adventure.

Here's a selection (it's worth clicking on them to see them a bit larger):

And to prove it here's the source images for that last panorama: 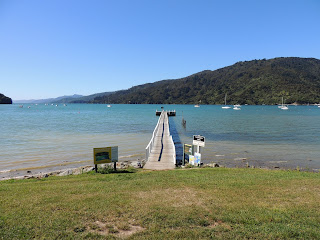 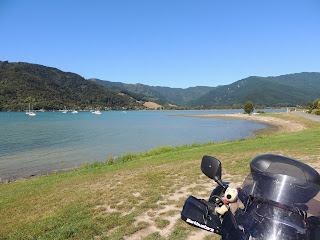 Weird is cool!
Posted by Andrew Thomson at 8:13 pm 8 comments: