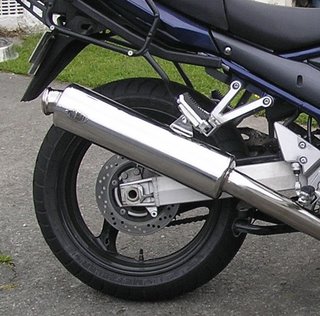 Now you can hear the bike!

I've finally got my old Promuff muffler fitted to the new bike. The muffler had done approx 30,000 k's on the old K2 so Brendan (who made the muffler originally) took it apart and repacked it. Because the K6 muffler was not a slip on like on the K2 it meant that Brendan had to modify the inlet side of the muffler and then weld it to the pipe coming from the collector under the motor.

As you can see from the picture he has made a really good job of it and it looks like it's been there from the factory.

The bike sounds great - just like the old one. Haven't had a chance to go for a decent ride yet (windy as hell still) but have got a toy run to do next weekend - a good chance to see how the bike goes with the new muffler.
Posted by Andrew Thomson at 5:06 pm No comments:

You can find some interesting things on the net. Check out this site, here's a few links to some articles that caught my eye:

Looks interesting - should be a good mile muncher.

Posted by Andrew Thomson at 10:09 pm No comments:

Had an update (over a bad cell phone connection) from Invercargill last night. The old man had made it down after battling some extremely high winds and some rain. He reckons that at one stage when he was heading into the wind the Beemer wouldn't pull top gear at 100k's (pretty tall 6th gear). Must be time he got another big Suzi.

The weather forecast for today wasn't that flash either but he and his mates were going to head off to the beach racing anyway. Not really the sort of weather for sitting on a beach - hope the weather improves.
Posted by Andrew Thomson at 9:42 pm No comments: 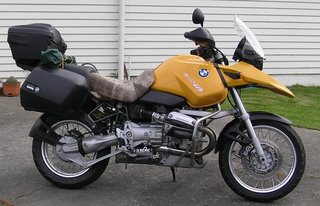 I had a house guest on Tuesday night - my old man on his way south for the Burt Munro Challenge - lucky sod. This is a bike rally being held in Burt Munro's home town of Invercargil to celebrate Burt Munroe's achievements and the movie 'The Fastest Indian'.

There's going to be beach racing, street racing, endurance racing and speedway along with a bike rally and a special showing of 'The Fastest Indian'

Posted by Andrew Thomson at 7:30 pm No comments:

Valentino Rossi had a great 2nd Rally in the Rally of New Zealand. He finished in 11th place - far better than the DNF in his first rally. More info at the links below:

Posted by Andrew Thomson at 7:07 pm No comments:

The best bike rider in the world, Valentino Rossi, is in New Zealand competing in the Rally of New Zealand. He's swapped his Yamaha for a Subaru Impressa but has kept his racing number - 46.

This link takes you to an article on his arrival in NZ:

It's a little out of date though as the news on TV tonight had him listed as being in 14th place - go The Doctor!
Posted by Andrew Thomson at 9:29 pm No comments:

Save the Planet - Ride a Bike

There's been a heap of stuff on the box about how we've gotta start looking after the planet, stop our reliance on fossil fuels etc. The greenies and the government are telling us to get rid of our guzzling cars etc and use public transport.

I've yet to see any of them mention anything about bikes. They only ever mention them when some idiot's written himself off while being chased by the cops or something. They never mention that they are a relatively cheap means of transport (esp fuel wise) and that they take up less space on the roads and in car parks.

When are they going to drop the price of bike registration and maybe change the rules on this with regards to engine capacity. Currently it cost you the same to register anything over 49cc regardless of whether it's a scooter or not.

They should definitely raise the capacity limit to at least 250cc to help encourage more learners out there. It would also mean that some of the larger 4 stroke scooters would cost the same as a 49cc 2 stroke to register - no smoke and probably better economy. I'd probably consider a 250 to go to work on etc. It'd save the tyres on the Bandit as well. While they're at it they could also look at allowing larger capacity (but tame) bikes in as learner bikes like they do in some states in Oz. 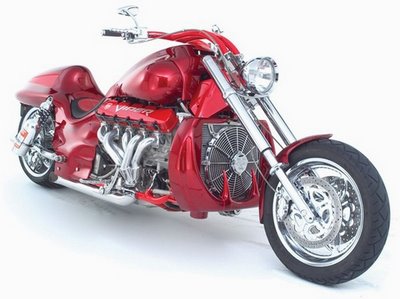 Posted by Andrew Thomson at 9:42 pm No comments:

Nothing on the Boob tube tonight (surprise, surprise) so I've been playing. There's a few small updates to some of the pages plus a new page showing the gear I wear/take with me on my travels. Planned Rides page also updated.
Posted by Andrew Thomson at 11:11 pm No comments:

Well, the weather's been a bit crap since I've been back from the 4 Points ride so not much riding has been done lately - just a quite ride this arvo, out in the wind and rain.

Recently there has been a lot of articles/letters to the Editor in the bike mags I get regarding service or lack of it in some bike shops. They tend to follow the same story - guy goes into buy a bike and is treated pretty shabbily. The sales people seem uninterested and expect the custeomer to buy the bike rather than the salesman have to put in some effort to sell them.

This has pretty much been my experience this year when I was out looking for a new bike. Firstly, I was considering a Honda Blackbird as the Honda "Red Carpet" dealers supposedly had a good deal on them. I went into one dealer who had a 2nd hand one there which I was able to test ride (enjoyed that) but new ones were not available at that time. The dealer said that trading my Bandit would be no problems and that he would get a hold of me when he new the bikes were coming in - I'm still waiting.

After this I did some web browsing to see if I could find one anywhere. I found a few advertised on websites so I filled in an online form for one dealer and fired it off - haven't heard anything from them.

Then one fine Saturday I decided to head off to the above shop and also checkout a few others if necessary. Firstly I went to the local Palmerston North Honda dealer to see if they had one and seeing as no one could be bothered even saying gidday (the usual response at this shop - think you need to ride a Harley) I didn't ask them about Blackbird availibility.

Off I went to Masterton to the shop where I'd seen a Blackbird on their website. They were flat out on a Saturday morning (good - people were being served) and did not have a Blackbird in the showroom so I carried on down to Wellington. At the Honda dealer in the Hutt there was no Blackbirds and the salesman was busy talking to a mate. I could have waited and maybe talked to someone but I as I hadn't even got a "Can I help you" or "Be with you in a minute", I couldn't be bothered.

Off I went again and headed into Wellington to check out Wellington Motorcycles (Suzuki, Triumph, Hardley Dangerous) just for a nosy. Spent a bit of time looking at the bikes and it wasn't long before a salesman came up to me and started chatting. He listened to what I was saying, wasn't pushy and naturally suggested a Hayabusa. I went off home with his card, impressed with this shop and annoyed by the others.

A few weeks after this I found details on the new model Bandit (K6) and thought that maybe I should consider upgrading to one (a lot cheaper than a Blackbird). Also, Mark was looking to replace his written off 750 and he liked my K2 Bandit and was keen on the new one. Great, we'll be able to get a good deal if we buy them together! Off we went to the local Suzuki shop we're I've bought my last 2 new Suzukis and spent thousands over the years.

Recently this business has changed hands and I did not know the salesman. He initially was very keen to do a deal on 2 bikes, offering a reasonable discount. Then I mentioned that I had a bike to trade - whoops who said a dirty word! Not interested at all in trading (even when I mentioned my previous 2 bikes came out of his shop) but he would be happy to sell it on behalf (and take probably 20%) or advertise it on Trade Me etc. He lost me straight away - out walked to potential bike sales. (Two weeks later I spotted a second hand Bandit in there - can't have been a trade?) The way this place has gone down hill is a shame as I still deal with the parts and service guys who do know about customer service...

As it was still early we decided to pop down to Wellington and see the guy I'd talked to a few weeks back. When we got there they were absolutely flat out - people everywhere going for test rides, buying bikes and bits etc. We saw a guy who wanted a bike but didn't know what one (money in pocket for a toy but no idea) being listened to by a salesman and pointed at a few models, telling riding stories etc before the guy left (thanking the salesman as he went). A good salesman in action.

We ended up talking to this salesman and he was very good, showed us luggage catalogs etc and didn't bat an eye when I mentioned I had a trade. As the new Bandits hadn't even landed yet we left with more cards and left our phone numbers etc. The rest is history: the bikes turned up, a very good deal was done and 2 guys are very happy with their bikes and the service they got - shame we had to go out of town to do it. We'd even go back there for services but it's a bit awkward due to the distance and work comittments etc.

The story doesn't end with Mark and I - recently another mate went looking at bikes. He hasn't had one for a little while but was keen to look at a new GSX1400 (it would have been his 2nd one) for the summer.

Off he went to the local and started looking at the 1400 in the shop. After 5 mins or so of looking it over and the salesmen still hadn't put down their coffees and pulled themselves off their couch to talk to him, he walked out of the shop, down to the local Ford dealer and bought a V8...

How many sales can these guys afford to miss?
Posted by Andrew Thomson at 4:15 pm No comments: