Posted by Andrew Thomson at 10:22 pm No comments:

Why I'm not on the Friday night ride tonight

Yep, got taken out on the VTR on the way home from work. A guy who admitted to being in a hurry to get home failed to give way and clobbered me at slow speed (both of us) on the right hand side of the bike and over and off I went. No injuries to me except for a bang on the knee and a bit of a graze there but the poor wee Honda got a bit hammered.

What I think is the worst of the damage is to the RHS radiator where the fairing was rammed into it. Coolant everywhere so I couldn't ride her home so Brian had to come and rescue me with his trailer. Otherwise, the fairing is pretty much toast on both sides, the screen is cracked, LHS indicator gone, a wee scratch on the LHS muffler (which has been pushed in closer to the center of the bike), clutch lever & mirror and that's about it.

Insurance claim is already sorted with the car driver accepting liability etc. It just remains to be seen as to how long before she's back on the road. Really annoying but the worst accident I've had in 20 years...

More soon when I hear from the insurance company/bike shop.

Posted by Andrew Thomson at 9:44 pm No comments:

The latest Rusty Trumpet (the Rusty Nuts newsletter) is up on their website here. It even includes a little more info on the 2010 10,000km in 10 days run.

And there are some more GC write-ups here.
Posted by Andrew Thomson at 7:05 pm No comments:

I forgot to mention in my Friday night ride blog that I can now ride and listen to my ipod at the same time. I found some in-ear earphones lying around the place and decided to give them a go.

The good thing about them is that they do block the wind noise and therefore the ipod does not have to be on very loud. They are also pretty comfortable if in properly - not sure about on a 1,000km day but maybe I'll give that a shot too.

The only issue is getting them in properly and having them stay there. If they're in properly they tend to stay in but if not they can work their way loose - as the left one seemed to do. The only other thing is that you cannot hear a thing anyone says to you - unlike when wearing ear plugs. I'm also not sure what's better for your hearing: music on quietly or ear plugs???
Posted by Andrew Thomson at 5:55 pm 1 comment:

Email ThisBlogThis!Share to TwitterShare to FacebookShare to Pinterest
Labels: Farkles

Not his favourite topic: http://www.timesonline.co.uk/tol/driving/jeremy_clarkson/article4963194.ece
Posted by Andrew Thomson at 9:17 pm No comments:

Not the best weather for it but today Brian & I took the Hondas up to Napier & back for a quick visit with my folks. We left Palmy in okish weather but by the time we stopped for gas in Danniverke we'd hit our first patch of rain.

Leaving Danniverke we headed out through Matamau, Makotu and Ormonville before taking the back road past Takapau and into Waipuk. Then we turned further East at Waipawa to take us to Patangeta (it absolutely bucketed down through here) and up Middle Road to Havelock North and finally Napier.

After a nice hot lunch with the olds and a bit of mucking around with the bikes in the shed we suited up again for the ride home. After gassing up in Hastings we hit highway 50 and battled with the wind all the way back. More showers also added to the excitement.

Not the best day for it but still a nice ride - be even better once we see some proper summer.

Not such a big crowd tonight but then there's a few away on the Four Points and the weather has been a little on the crap side this week. Just a quiet pootle out the back of Ashhurst, Fielding, Halcombe and Santoft. We caught a little light rain in places but it was otherwise quite warm and muggy. Stopped in again at Fielding for a quick drink before making my way home in light rain. Nice to get out and give the VTR a run too. Hooray for daylight savings...
Posted by Andrew Thomson at 9:44 pm No comments: 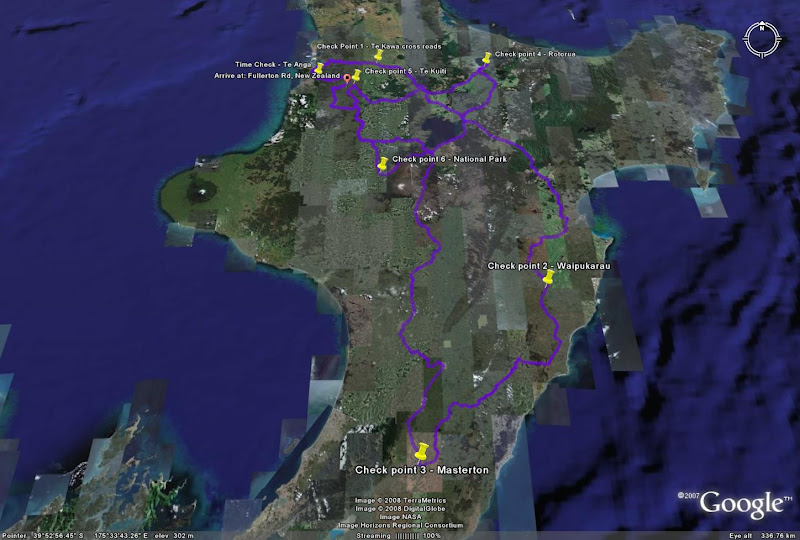 Okay, fixed some wee computer issues and have got my ride write-up done. See it here.
Posted by Andrew Thomson at 3:50 pm No comments:

Just a quick post here to say that the

2008 Grand Challenge is all over and I managed to get there in the end!

The route was reasonably tough this year and took me to a few places where I'd never been and the weather certainly added another element to the challenge.

Perhaps because of this of the 104 people who registered for the ride, 30 did not finish.  This includes those that crashed out, broke down and pulled out due to weather or knowing that they would not have enough time to complete the run.

One who did not finish due to a crash was a riding friend, Steve.  Steve had a low speed fall on Route 52 north of Wimbledon.  Luckily he got away with a broken collarbone and is now resting at home.  It certainly was not nice coming around the corner and seeing him sitting on the side of the road with his bike over the bank.  Get well Steve and I hope the 'busa is not in too bad condition.

That's about all for now - I'll do a more detailed write-up for the website at some stage. 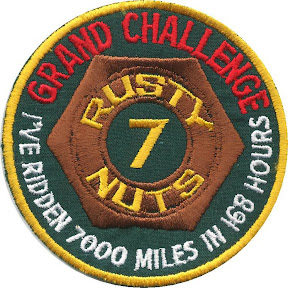 Posted by Andrew Thomson at 2:13 pm No comments:

Posted by Andrew Thomson at 10:30 pm No comments:

Slightly better weather this week - well actually a lot better - no rain and not too much wind. Another good turnout too - nearly 30 bikes. The ride took us out Pohangina East road, through Apiti and back into Fielding.

A great bit of road for having a play on but plenty of care required in places with metal on the road and the remains of small slip etc. A couple of wee stops allowed the group to reform we all road into Fielding together before stopping at a local watering hole for drinkees and the odd yarn.

Nice ride and I was pleased to discover that the VTR's high beam is quite good (had my doubts due to it's size). I'll miss next week's ride as I'll be sitting in Turangi resting up before the start of the GC - oh damn.
Posted by Andrew Thomson at 10:01 pm No comments:

After doing the 2007 800k's in a day Andrew had decided we needed to do the 2008 version as well. The club had run it earlier in the year, but with a poor turn out had decided to run it again this weeked.

As it turned out Andrew got crook and couldn't make it so I was off on a solo expedition. The weather wasn't great with wind and rain forecast, but I had already decided I was going regardless.

An early breaky and I was off, filled up the bike on the way into town, then headed around to Breakers for the sign in and kick off. When I got there about 4 other bikes were already there. I paid my money, they recorded my odo reading and as the other guys weren't showing much sign of leaving I decided head off.

The first check point was Inglewood so it was off to the Naki I went, not the most exciting ride but easy K's to clock up early. A guy on a Harley that I had seen at Breakers passed me at Ohakea and instead of sticking with him I let him go and continued on alone. Somewhere between Wanganui and Waverley my morning cup of tea needed to get out so I had a quick pit stop to water the weeds. I'd left Palmy at 07:07 and was in Inglewood about 09:30 I got gas, had a quick drink then was off again.

The weather had looked a bit damp ahead and I tossed up stopping to put the wet weather gear on but decided to continue until it got real wet. Once I got away from civilisation I upped the pace a bit and was soon attacking Mount Messenger, the road was wet so I had to take it a bit easy. After that it was the Awakino gorge and onto Te Kuiti. I had calculated this to be about half way so it was good to know I was on the down hill side. Heading through to Whakamaru and the second check point the roads were once again wet with the odd shower to stop me getting too hot.

I pulled into Whakamaru at about 12:15, the guy on the Harley was just leaving, so he hadn't got away on me much. I had a drink and bite to eat and as I was leaving the next group pulled up.

I had hoped to get all the way back to Palmy on a tank but was going to see how things went. Down the back of the lake I got to cover the ground at a good pace with the roads dry and the weather improving, then it was onto Mananui and the western side of the mountain and into the Paraparas. I enjoyed this bit and the road was in good condition considering all the rain over the winter. I was soon in Wanganui for the second time in a day.

I decided to keep going and see how my petrol supply held up but it wasn't long before the gauge was flashing and I knew I would be pushing it to make it to Palmy so had a quick fill up at Bulls. I was back at Breakers at 16:08, nine hours and one minute after leaving with 810km in between.
Posted by Mark at 1:52 pm No comments:

Email ThisBlogThis!Share to TwitterShare to FacebookShare to Pinterest
Labels: 800K's in a day

Yep, it's only a couple of weeks now so this week the Connie went in for her first major service in preparation for the big event. It was valve adjustment time and this is reasonably major as it takes a bit to get at her internals. Seven and a half hours labour for the complete job so yes, it was expensive! Never the less, she's all set now - all I've got to do is pack the gear I need and I'm on the road...
Posted by Andrew Thomson at 12:12 pm No comments:

First one of the season and I was crook with a cold but went anyway. A really fantastic group of bikes (about 27 in all - couldn't get them all in the picture) all keen despite the average weather. 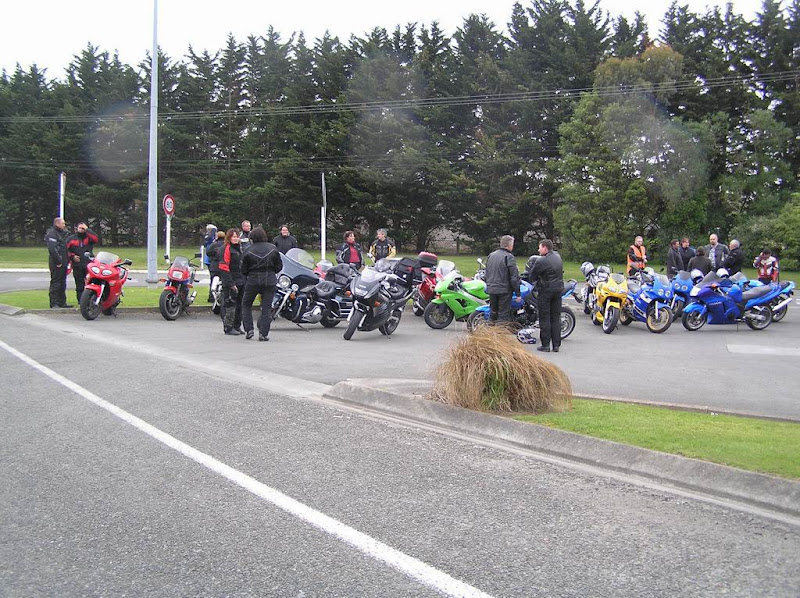 Due to the windy conditions, the ride was cut short and we simply headed through the gorge, then back through Balance and over the track back into Palmy. It was quite windy through Balance and there was quite a bit of drizzle. I had issues with my visor fogging as I was wearing my old shoei which has no anti-fog insert fitted. Visibility got worse coming down the track as it was quite foggy - not a lot of fun.

The ride ended at the Brewer's Apprentice where I departed due to my cold and also wanting to be fit and ready for the 800km ride today - alas, as I write this I'm still fighting the damn bug and given the weather conditions I've bailed on the ride. Hopefully Mark has a good ride and writes it up...
Posted by Andrew Thomson at 12:03 pm 2 comments: