As I've mentioned before, the front tyre of the DL had been getting fairly long in the tooth and I finally got around to changing it last week (nothing like a ride on the coming weekend to give you that bit more incentive).
Knowing stuff all about adventure tyres I did a bit of research and priced a few tyres before finally settling on a Pirelli Scorpion Trail. It obviously doesn't match my rear Michelin but it was a lot cheaper than an Anakee.
Sunday was the tyre's first test and it seems to be a halfway decent tyre - so far - I will reserve my final judgment until I see what sort of mileage I get out of it. If you have read my previous ride report you'll know that the tyre was tested on all sorts of gravel roads, mud and clay and very wet tarmac.
Obviously I'm still pretty new to this adventure riding lark and do not push the bike hard "off-road" (and I don't think that I ever will) but the tyre behaved itself very well even in the very trying mud/clay conditions of Puketoi Road. Add to this a fairly spirited ride chasing down a BMW on wet roads and I have to say that I have a lot more confidence in adventure rubber now. 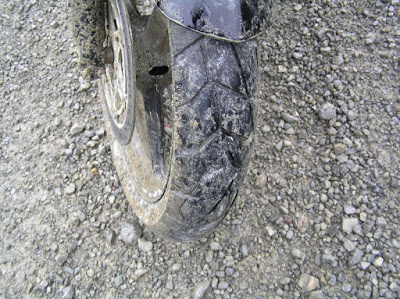 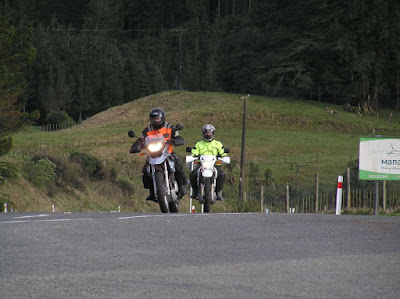 My second outing with the Back Road Riders started off with a chilly ride through town and up to the ride meeting point at the top of the Pahiatua Track. Myself and another guy on a nice Beemer were the first there so we got to listen and look out for the other riders coming from both directions.
Fairly soon there were thirteen of us and it was time to get cracking. First up was a the drop down the track and then the turn-off towards Mangamire. After crossing the first one lane bridge we took in our first piece of gravel. Initially the gravel was quite deep and required a bit of care but after a while we popped out onto some really hard stuff which also had less metal on it so the pace became pretty quick - heaps of fun.
After this great little squirt we popped back out onto SH2 at Eketahuna where tanks were topped up and lunches were bought to take with us as we continued our ticky-tour. Almost straight away we were back onto good gravel which took us through to Alfredton Road.
From here we were led astray for a minute when Graeme took us left when he actually meant to take us right. Never mind, he soon got his bearings back and had us on a fantastic road (Pori Road) which took us on a great climb offering some fantastic views. The only problem here was that the damn GoPro was not recording - it is quite hard to know if you've turned it on properly and unfortunately I hadn't - curses! 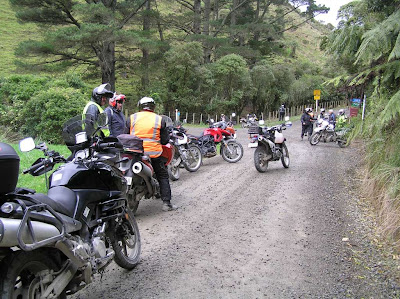 After a quick regroup we started out on Puketoi road and some pretty serious adventure riding. The descent was very tricky with heavily rutted corners and a very slippery clay surface. Oh, and there was mud, puddles and rain to deal with too. This was very hard work with 1st gear being about the only one used and needing to be very careful on the brakes. I would certainly not attempt this road by myself and ideally in dry conditions rather than what we had. In the end I made it out ok but three other bikes had little lie downs, luckily with very little damage. Once again no video of this and definitely no time for photo taking either. 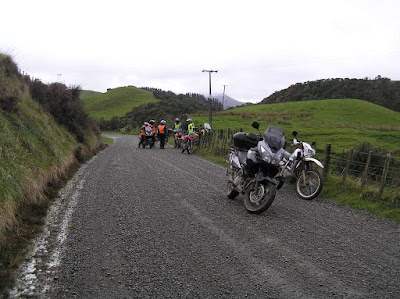 Once back out onto some decent gravel I came across a couple of the guys trying to get Rob's F650 fired up. It had died on him and was not co-operating with the starter button. Eventually it started again and we caught up to the others waiting for us. Unfortunately no sooner had we got going again and the poor old Beemer started playing up again. This time around we had some more expertise on hand and after removing a breather pipe the bike started getting more fuel and was soon back on song.
The next little hop took us up Route 52 to Pongaroa where we stopped for a well earned lunch (it was now 2pm). Following lunch a few of the riders kept Rob company as he rode home not wanting to carry on and possibly have bike issues in the middle of nowhere while the rest of us headed for Waihi Falls. A pity they couldn't join us for the next bit but I hope they were not needed to operate on the 650.
The trip to the Falls was brilliant with good gravel and plenty to see, the only issue being some cattle on the road again (we had already had to deal with three bulls earlier in the ride).
Back on the bikes it was time to head homeward - via some more great gravel roads of course. First up was Towai Road followed by Coonoor Road which eventually took us back onto the seal near Makuri. This was yet another great section with the road pretty condition in most places, just a bit more mud and the occasional bit of deeper gravel to keep you on your toes.
Back on the seal I had a great ride back to SH2 - sitting behind Graeme and enjoying a good pace on the wet roads (my new Pirelli seems to do the trick). At the main road we all said our goodbyes and headed in different directions towards our respective homes.
Another fabulous ride with the Back Road Riders and I even got to ride Al's DR! Can't wait for the next ride... 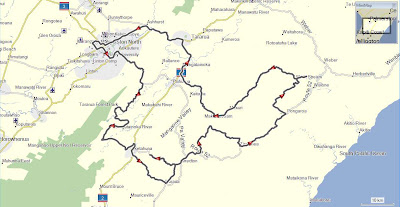 Email ThisBlogThis!Share to TwitterShare to FacebookShare to Pinterest
Labels: Back Road Riders, Rides

I may have to clean the bike one of these days... 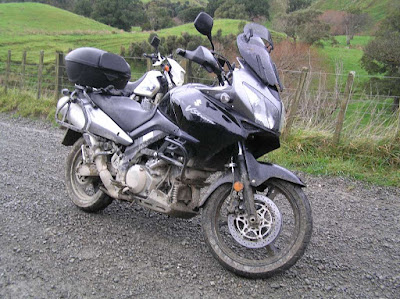 More on the new V-Strom

Still no answer to my question but here's some more pics...
Posted by Andrew Thomson at 7:40 pm No comments:

After a lot teasing Suzuki have finally unveiled the new 650 V-Strom. To me it just looks like a restyling job - a bit more of a modern look. The screen appears to be adjustable and the bike is slightly lighter. One negative is a drop in tank capacity - a real shame when the 650's are renowned for their economy and range. More info here. 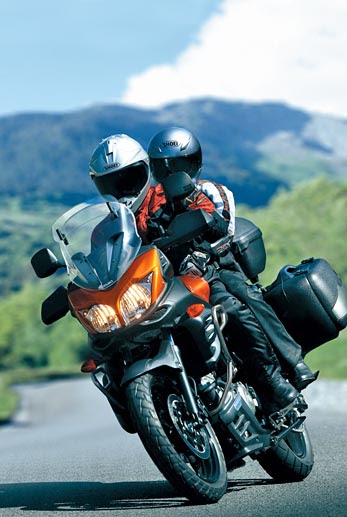 I only have one question - where's the thou?
Posted by Andrew Thomson at 6:01 pm 3 comments:

Email ThisBlogThis!Share to TwitterShare to FacebookShare to Pinterest
Labels: Pictures

Really lousy weather yesterday - the sun was gone by 9am and once it started raining it just kept at it until sometime before my eyes opened this morning.
Today started a little better so after walking the dog and pottering around home for a bit I was able to get the Connie out for a short pootle. The ride didn't end up very exciting - just a quick ride through to Woodville for lunch and then return via the Saddle.
So nothing startling but at least I got out for a while and Connie got a little bit of exercise. Looking forward to a really nice, crisp winter's day to got for a decent squirt...
Posted by Andrew Thomson at 2:59 pm 2 comments:

Cracker of a day 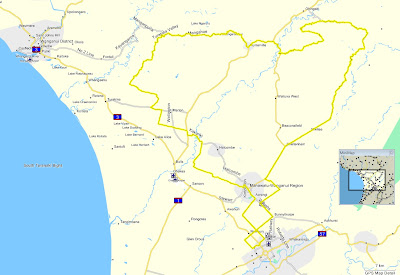 Last weekend was a long weekend and early on the weather forecast was looking decidedly crappy. I'm not really sure what the forecasters were smoking but in the end it was nowhere near as bad and Palmy actually had a record high for this time of the year on Sunday. As luck would have it I chose Sunday for my wee pootle.
Before I left I had already decided to head over towards Marton and ride the gravel section of Turakina Valley Road and then ride through to Hunterville. At Hunterville I was then going to have to work out my route home...
After a quick stop for lunch (left it pretty late in the day to head off eh) in Feilding I took a few back roads over towards Marton but then skirted the town itself and made my way to Turakina Valley Road. 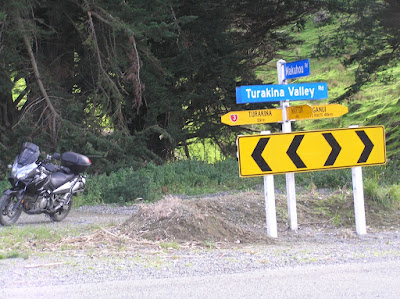 I knew that there wasn't a lot of gravel on this road (having ridden it a few times - the last time on the Connie) but then the front tyre on the DL is still awaiting replacement and I was just after a nice potter in the countryside.
This section of Turakina Valley Road is pretty short and after the gravel and another small section of tarseal you arrive at a crossroads. Left will take you through to Wanganui and right will get you to Hunterville. This road is another cracker and I've ridden it quite a few times including twice on the Grand Challenge - once in the darkness where navigation did prove a slight issue...
Well, on this occasion there was no excuses for poor navigation but I have to say that the road is a bit worse for wear in places with a lot of road works, including a small section of gravel. 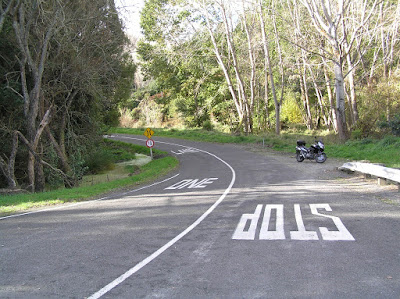 As you'll see from the video the DL was thriving in the conditions and I had a great wee fang to Hunterville.
From Hunterville I decided to ride through to SH54 (Vinegar Hill) and then investigate a road that I thought I'd ridden years before (and accidentally got into some gravel). As it turns out I think I got my roads wrong but boy did I find a goodee!
The road in question was Lower Pakihikura Road and after a few amazing hairpins the road then started to wind itself around the side of hill and offered some fantastic views across the valley. After a while the road did eventually turn to gravel and in places it was a little too "marble-like" for me with a fair bit of caution being required. I'm hoping a new front tyre is going to improve this sort of riding but I'd rather be slow and stay upright than quick and over a bank... 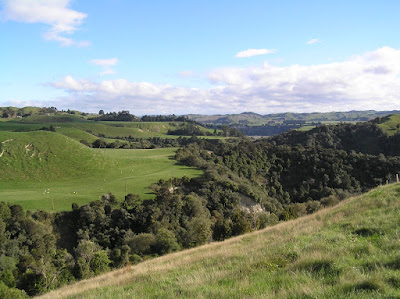 Along the way the road surface alternated between nice gravel, more marbles and even some gravel-less dirt (nice). I also had to make a couple of turns based on instinct rather than stopping to look at the Zumo and decided on following the sign posts to Ohingaiti.
Eventually I popped out onto a familiar road (and one with tar mixed in with the gravel) which took me through to Pemberton. From here I was forced once again to finish off my ride with a glorious squirt through to Kimbolton and then home.
All up I was away from home for about 3 hours and rode something like 220km. I have to say that this really rates as one of the best rides the DL and I have been on so far (Ok, so the Napier-Taihape loop was fantastic too), it was a truly magnificent day and the scenery and the ride were just magic! I hope for many more like this one!
More pics here and a video playlist below.
Posted by Andrew Thomson at 7:57 pm 3 comments: