A wee while ago Sarge started the ball rolling for this ride with a query to the Manawatu Riders Facebook page: "about time we did the FH again isn't it?"  Or something like that anyway.

This weekend is a long weekend (for some) and Sunday was picked for the ride - dammit, I was working!  A good thing that the weather started looking a bit doubtful on Friday and they decided to move the ride to Saturday then...

Five of us met up in Fielding in nice conditions for the ride up the 'naki to Stratford and the start of the Forgotten Highway.  We took it pretty easy as the long weekend meant a lower speed tolerance by the police and we didn't want to encourage them to whip out their ticket writing pens.

We had a wee stop in Waverly on the way up and then another in Stratford to fill the bikes for the 150km trip across the FH to Taumarunui.  Not far out of Toko the road starts to get good with a series of brilliant saddles to wind your way up and then back down.  The only downer this time around was some seal repairs (no warning signs either) that needed to be avoided.  Here's a taste of the last of the saddles before Whangamomona - for some reason it's named Whangamomona Saddle.


After dropping down the saddle (and negotiating a couple of 15 km/h corners) it's just a few kms into the township (republic) itself.  As we rolled up we were even greeted by some very light rain- luckily it didn't hang around. 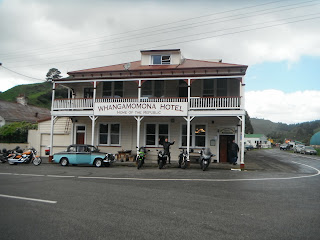 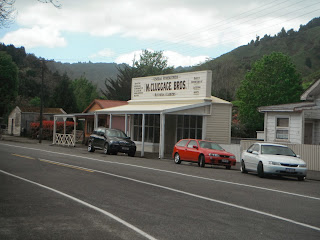 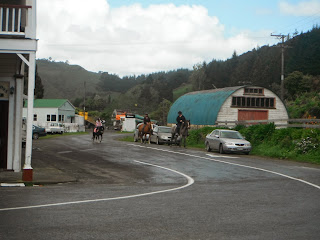 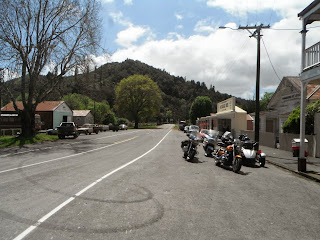 As per usual we stopped in Whanga to enjoy the sights and to feed our bellies at the pub - the Whanga burger isn't cheap - but worth it!

After lunch it was time to continue on our way through to Taumarunui and take in even more good riding.  We did however have to stop at the tunnel for a few pics. 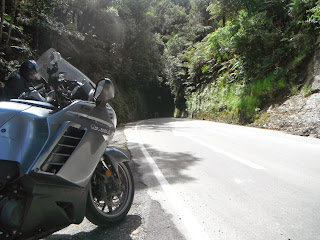 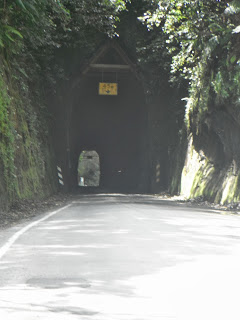 Not long after the tunnel the road turns to gravel but it is always in good nick (if a little dusty) so the Concours adventure bike made short work of it and we were soon back onto the seal again.

Somewhere along here we had a nasty little incident when Rob hit a large slump in the road and ended up parking his 250 in a muddy ditch.  Luckily he was unhurt and the bike was rideable.  Not really what we had planned and it certainly put a bit of a damper on the day. 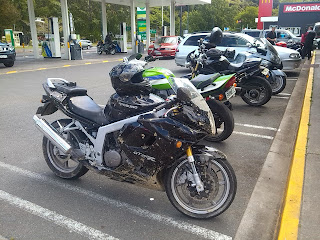 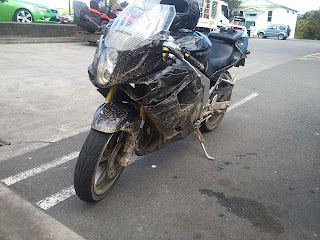 In Taumarunui we had a brief stop where we said goodbye to Rob as he was taking a more direct home while we aimed for the Para Para's.  After a fuel stop in Raetihi we hit the Para's and had a ball on that great bit of road. 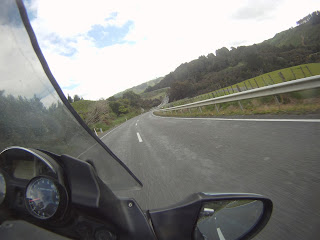 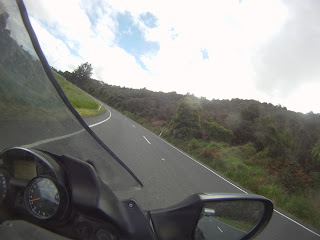 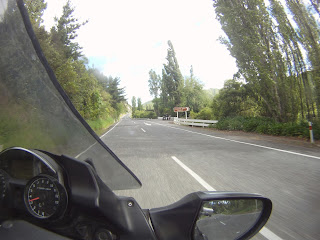 North of Wanganui we took our usual turn-off to skip Wanganui and then made our way home via Turakina, Marton, Halcombe and Feilding.  623kms of fantastic riding in perfect conditions - summer is on it's way! 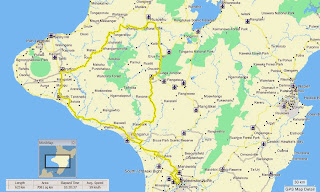 Today, with the help of Dad, the Connie got to have a bit of a birthday - in the shape of a bit of TLC.  But first I had to get up to Napier where my expert mechanic was.

I left home just after seven and after filling up in Woodville rode straight into my first taste of today's windy weather.  From Woodville to Dannevirke I was blown silly but it did get a bit better further North and was actually quite nice in Napier when I got there.

Barely had I got my bike gear off and bits of plastic were being removed in preparation for the start of our servicing.

Today we had three jobs to do: change the coolant and spark plugs and bleed the rear brake. 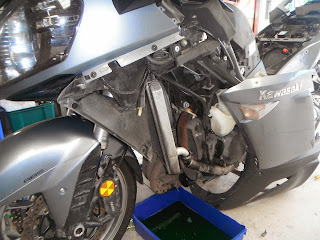 The coolant was probably the easiest job although Dad was very keen to make sure that there was no air-locks in the system so we fired her up and checked things over a few times before I went for a test ride as well just to be sure.

The plugs turned out to be the biggest mission - first we had to work out how to get at them!

Eventually we removed all sorts of stuff and managed to find a way to them.

Getting them out also was a mission but in the end we got there and there's now four new Iridium plugs all set to go.

The brake bleeding went fairly well and Dad got me a bit better feeling pedal.  The brake is still not perfect (I've never really thought much of the Connie's rear brake) but I got it to chirp the tyre on the driveway for a split second before the ABS kicked in.

Getting the bike all back together also took us a wee while - there really is a lot of stuff hidden under the plastic and it all needs to set just so - so it wasn't until about 4pm that I got to take that test ride.  The bike checked out all ok so I loaded her up for the trip home.

By now the wind had made it's way up the island and had really increased in it's vigour.  When I hit the Takapau plains it was particularly bad and I got blown silly - the wind I had in the morning would have been lovely to ride in by comparison.

Luckily once I got South of Dannevirke the wind had wound down to a minor blow and after another fuel stop in Woodville it was just a short squirt through the gorge and home before 7:30pm.
Posted by Andrew Thomson at 9:35 pm 7 comments:

...it's the Britten and it's magnificent!  Bruce Anstey having a ride most can only dream about...

A new season of FNR's

Yes, it's now daylight savings again so Friday night rides are back.  I'm not too sure how many I'll get to but after having the day off I figured I didn't really have a good excuse not to go.

This time around we have the support of the local Suzuki dealer so the ride got quite a bit more publicity (28 bikes turned up) and the riders got to enjoy a sausage before the ride. 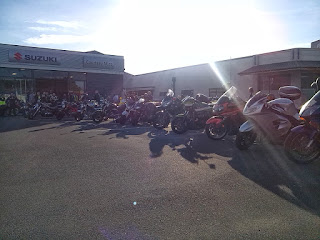 As mentioned we had 28 bikes turn up (some with pillions) including some learners/returning riders on small bikes and even a couple of three wheeled things so the route was just an easy 70 odd km taking us eventually to Fielding to one of the local pubs.

Naturally I had the GoPro with me and set it up to take photos but it decided to misbehave again and I only got a few shots as we left. 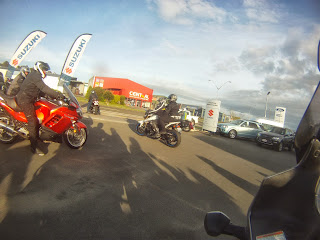 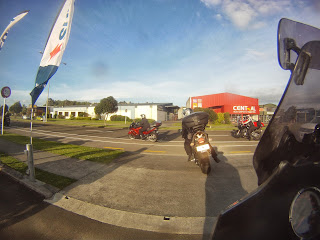 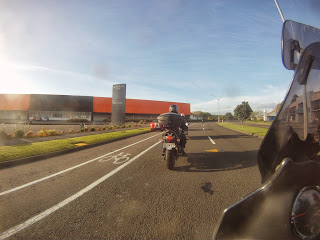 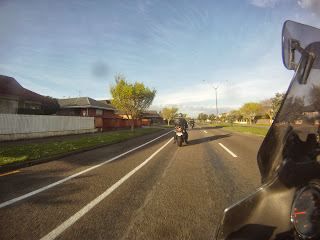 After a quick coke and a chat with some of the guys I vamoosed it home to feed his royal dogginess after a quite nice little pootle.
Posted by Andrew Thomson at 2:33 pm 3 comments:

Ok, so since having the DL I've mentioned a few times how in cold weather or humid conditions I have a lot of trouble with my glasses and visor fogging.  Chuck in rain and the normally a lot slower riding pace and the problem doesn't want to go away in a hurry.

Recently I decided enough was enough and that it was time to give contacts a go.  It's been a bit of a drawn out affair but on Sunday I finally got to go for my first ride with contacts in.

I didn't go for a huge ride just up over the Track, through Ballance and back to Ashhurst via The Saddle.  Still plenty of good corners and sites to enjoy. 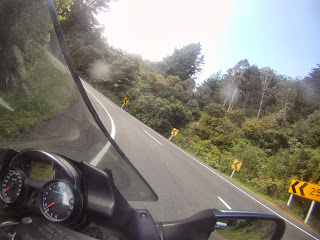 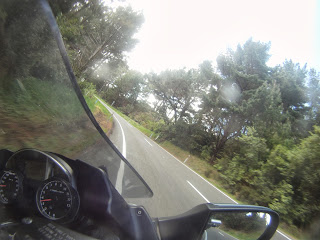 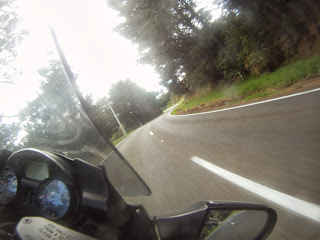 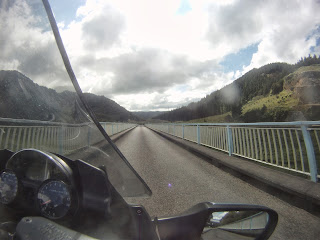 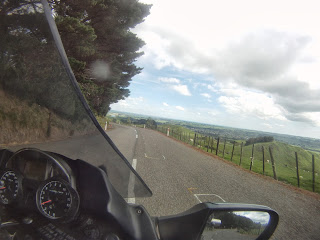 I managed to stay on the road and not bounce off anything so it looks like the contacts work well enough for me to see ok so that's a fairly important test passed.  The only issue I had was that every single time I either put my helmet on or took it off I was reaching either to put my glasses on or take them off...

I'm picking that in those "foggy" conditions on the DL I should be able to either crack the visor or raise it completely even in the rain and not have to worry about either fogging or rain obscuring my vision - look forward to it!