Cleaning out the cobwebs

A combination of not very friendly weather and a bit of a cold (near death experience - nearly as bad as man flu) has meant that the bikes haven't had a lot of exercise.  Yesterday I decided to ignore my suffering and get some fresh air in the best possible way known to man.

With the sun shining and the washing hitting the spin cycle, I wheeled out the Tenere and started getting ready for action.  By the time I had hung out the washing and geared up it was raining...Never mind, I was going!

After topping up the bike I pointed it North and made for Vinegar Hill.  Along the way I managed to shave a little bit of weight off the bike (unintentional but man, E-07's are not bad kit) before catching up to a big fat Volvo SUV.  He was obviously an awesome driver as he floored it when he noticed me sneak up behind him and then demonstrated his superb technique by using all of the road regardless of whether he could see around the corners or not - nice.

From Hunterville I took Ongo and Turakina Valley Roadz as far as Pohonui Road where I turned off for my first bit of gravel.  I took this as far as Okaka Road which I then took down to Papanui Junction.

Dropping down the hill the gravel changed as I hit stretches that had either been graded or had a bit more metal dumped on them recently.  Turning back onto Turakina Valley Road the gravel conditions stayed fairly similar but with the roads a bit more open the speeds increased and I started to get a bit more into the grove.  The S10 was loving it and I think its heft actually helps in this sort of stuff.

Further North there was a very short bit of seal before I hit the best conditions of the day - beautiful hard packed dirt with just a delicate sprinkling of stones!  This is definitely where whales love to play and after avoiding a couple of dozen sheep on the road the hammer was dropped.  You gotta love hooking top gear on the gravel!  Magic!

Popping back out onto the seal near Tangiwai I made contact with Neil and then hooked up with him for lunch in 'kune.  Another coffee at his place and it was time to head home.

A bit of SH1 took me South almost as far as Taihape before I'd had enough and turned off again to go in search of gravel.  Some good back road tarmac got me a fair way further South and finally onto Watershed Road for that last little bit of gravel. 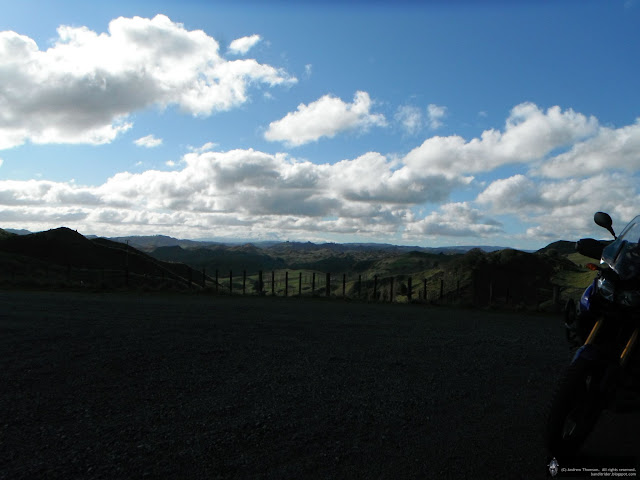 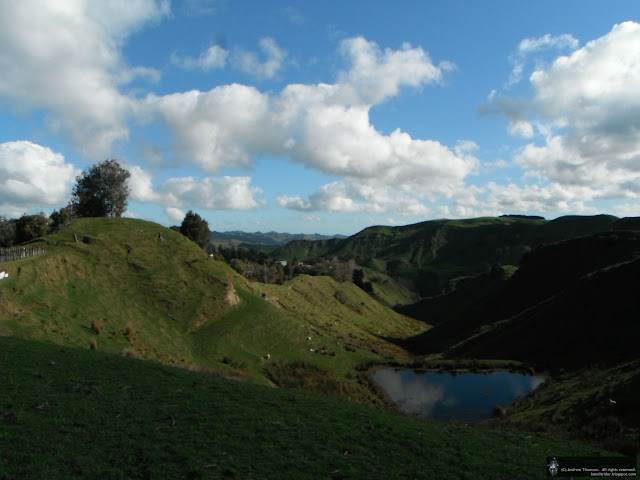 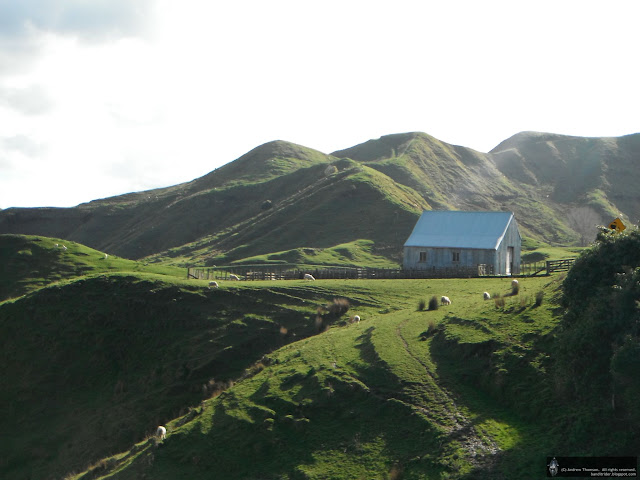 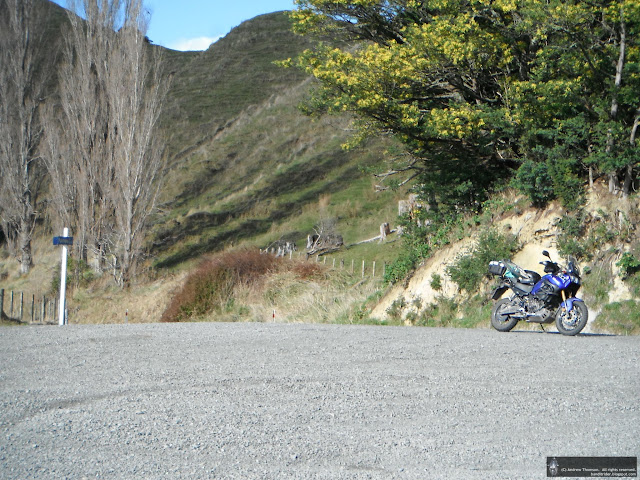 Watershed Road was a lot of fun but I have to say by the end of it I was feeling a little jaded so a quiet cruise home back over Vinegar Hill was the order of the day rather than more twisties or gravel - shake your head if you must...

Anyway, I pretty good day out on the bike and I certainly enjoyed the feel of the E-07's on the gravel - great Adv rubber!

A while ago I fitted an SW-Motech GPS mount to the Tenere and while it's a cool bit of kit I couldn't quite position the GPS so that it was easy to see and did not block my view of the Tenere's information centre (that's dash to you yokels out there). 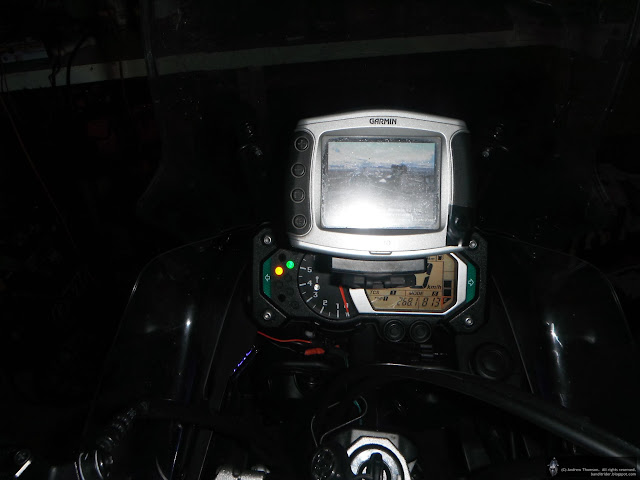 Anyway, the solution to my problem was to engage the services of my old man and nephews Alex and William to help sort it.

The solution to the problem was to make a plate that would allow the Garmin cradle to be mounted slightly higher on the mount.  To do this we cut a piece of aluminum to size and the boys drilled 6 mounting holes in it.  Later Dad painted it and then I eventually got my hands on it to install. 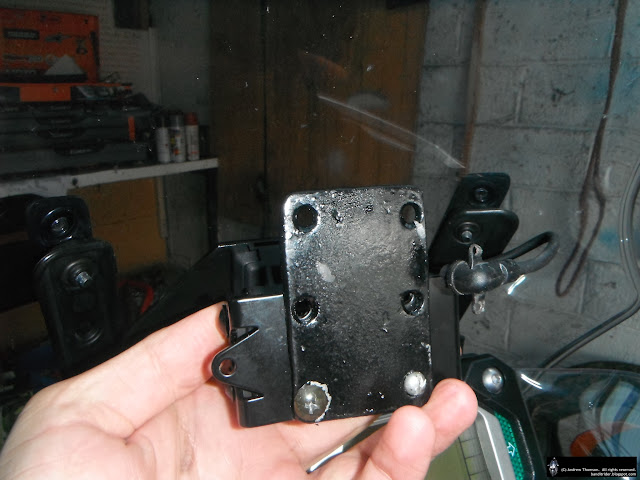 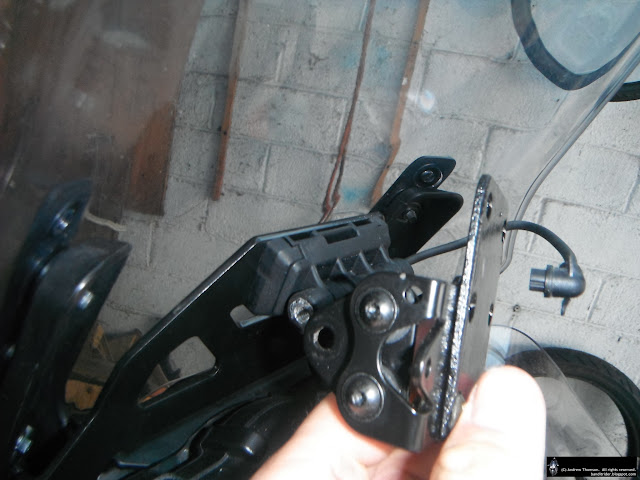 As you can see, the bottom 4 holes mount the plate to the mount.  The top 4 then are used to attach the GPS cradle.  In the pics you can see all the ugly scavenged bolts I used and maybe one day I'll replace these with some nice black ones... 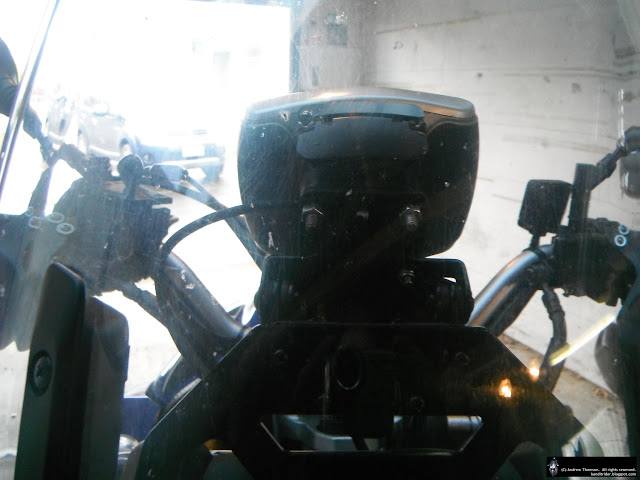 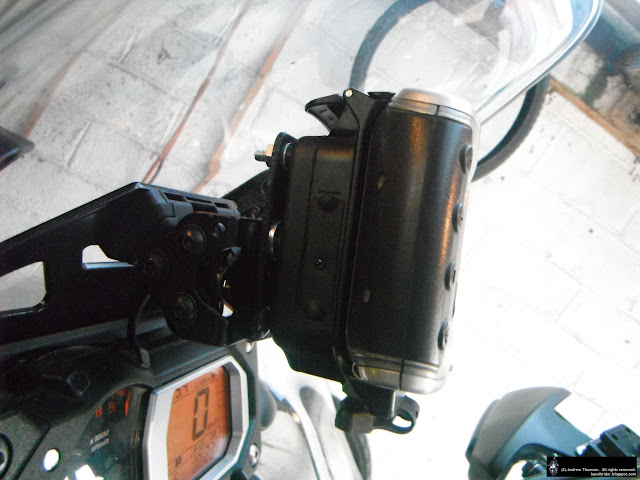 So does it work?  Well, of course it does!  That small "lift" has allowed me to adjust the GPS position so that it is easy to read from the seat and the gauges are not blocked.  That is, except for the very top of the rev counter but I don't really need to see the needle hitting redline - that should be fairly obvious... 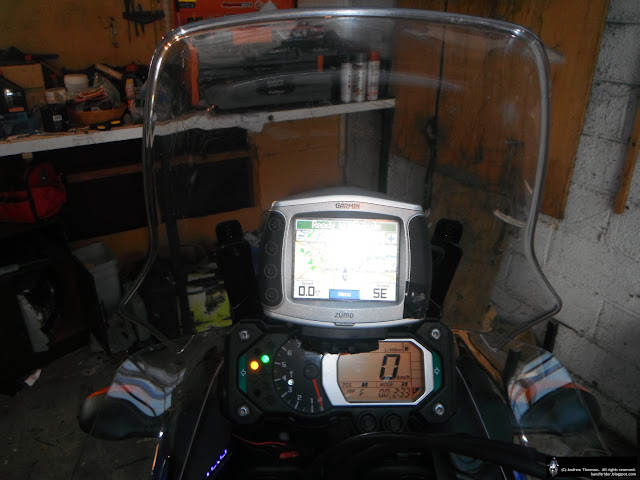 So, very happy with the homemade mod and lucky to have a team of engineers to call on for complicated jobs like this one...
Posted by Andrew Thomson at 7:28 pm 10 comments:

A couple of years ago we had a bit of a cold snap and I took the opportunity to take the Vee for a spin up into the snow and onto a closed Napier-Taihape Road.  You can reminisce with me here: http://banditrider.blogspot.co.nz/2014/07/searching-for-snow.html.

Well, last week (and yesterday), we had more shocking weather and there have been road closures all over the place - down in the South Island (funny that) and all across the Central North Island.  So, today it was the Tenere's turn to have a winter adventure.

It took me a while to get sorted this morning (I even packed a thermos for a hot drink up on the Annie) but I was finally gassed up and on the road about 10.  The day was actually relatively pleasant - the sun was out and it wasn't too windy - but it was still fairly chilly.

A quiet pootle over Vinegar Hill and up SH1 kicked things off and by Mangaweka the temperature had dropped quite a bit.  I got some light rain as I rode up the hill and saw my first "close" snow up on top of the hills.  The hot grips got tuned up a notch to 40%...

I turned off SH1 and rode across to Taoroa Junction taking it fairly easy on the greasy tar and carefully maneuvering around small slips and downed branches.  At the junction I went left instead of right (fighting the urge to go and jump off a cliff) and just a short distance up Pukeokahu Road hit the gravel.

The gravel wasn't too bad although it had been graded recently (the grader was still up there parked on the side of the road) and as I climbed a little I started to see snow on the side of the road and in some of the paddocks.  about half way through the below video I stopped to take some photos and take in all the whiteness. 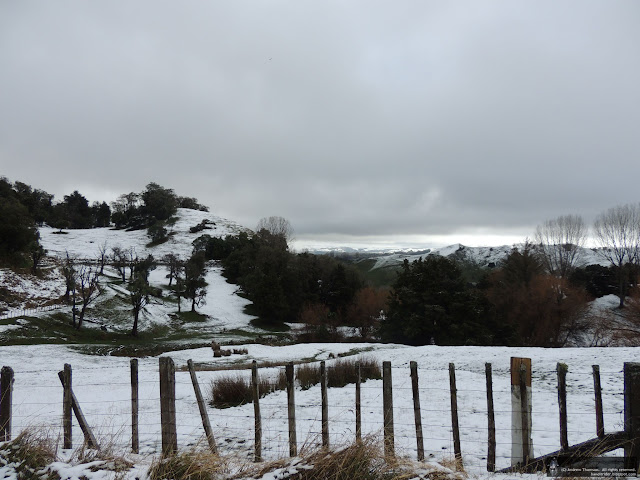 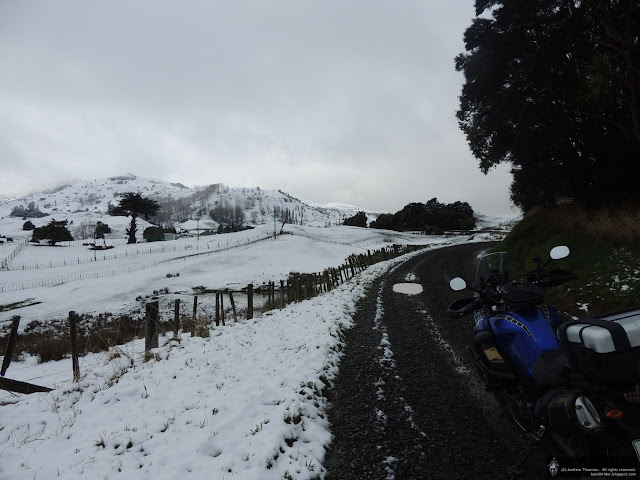 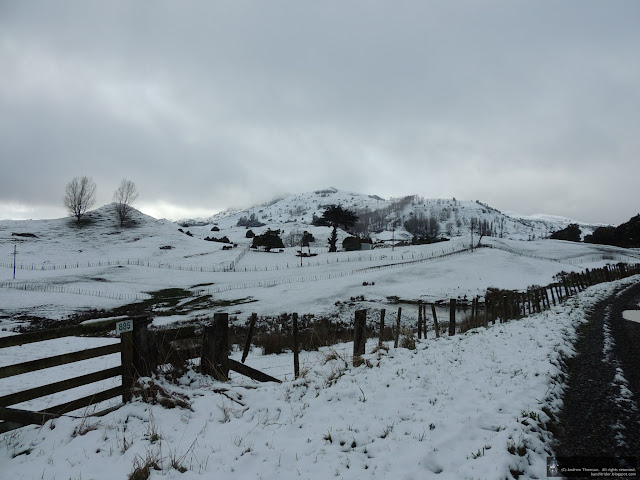 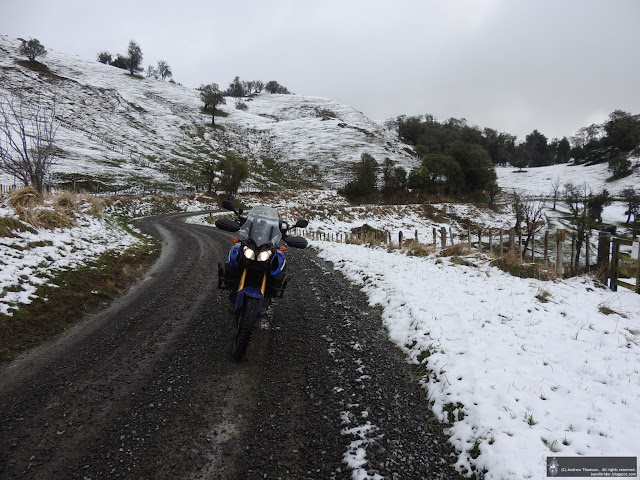 If you watched all the video (you did right?) then you will have noticed that the snow got even thicker and the road got fairly icy.  In the end I thought that it was only going to get worse (and more dangerous) so I stopped and retraced my steps.  Unfortunately, nowhere near the Napier-Taihape - I wonder what the road would have been like up there?

Rather than completely follow my route back towards Gravity Canyon I turned off onto Moawhango Valley Road and took this (and a couple of others) back to Taihape.  These were all neat little back roads which I pretty much had to myself and managed to eke some enjoyment out of them.


I arrived in Taihape at around about lunchtime but noticed that everyone else had too so I just carried on down the road to Utiku where I turned off the main road to take in more (sealed) back roads. 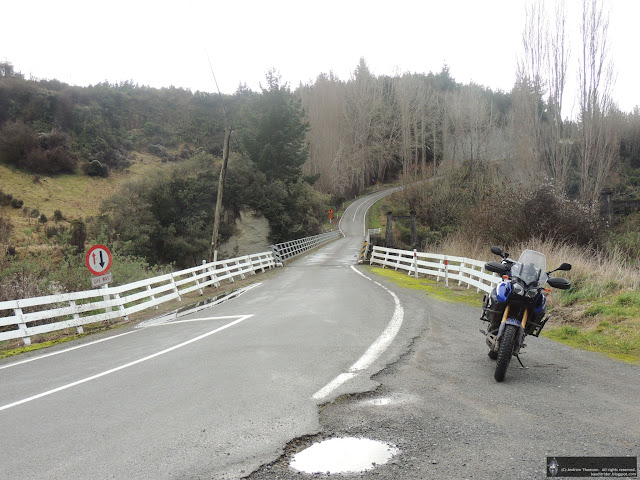 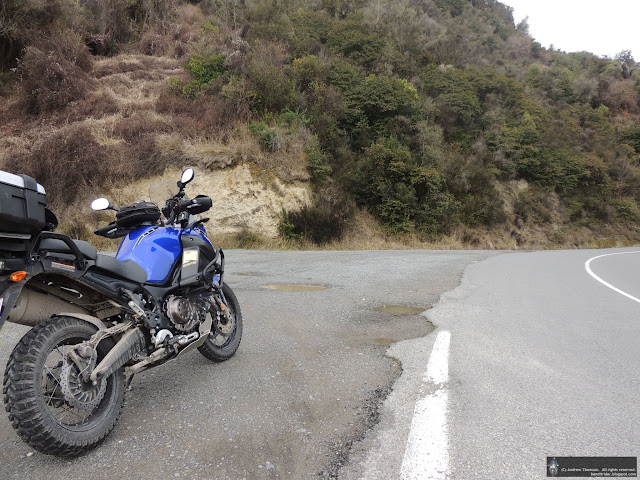 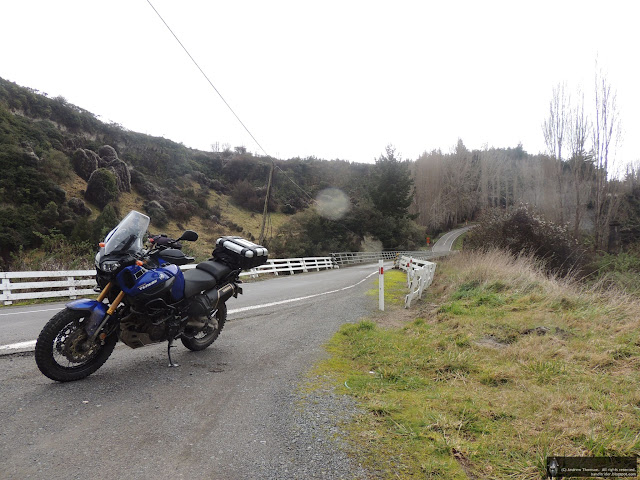 Eventually I was onto Ruahine Road where I turned the cameras on again expecting quite a few slips and plenty of mud on the first bit but it was actually pretty good.


Approaching Rangiwahia there was a slight delay as the locals were hogging (sheeping?) the road. 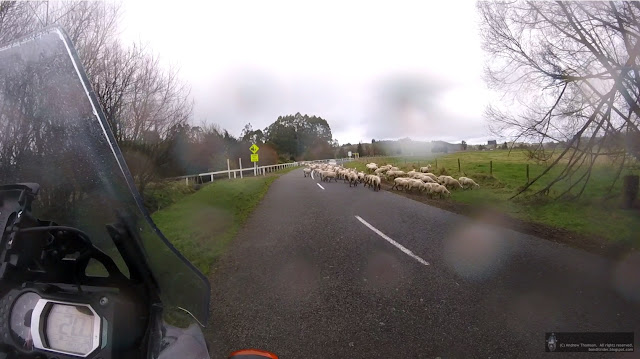 In Rangi I stopped briefly to turn the cameras off (remote not playing ball for some reason) and momentarily contemplated the thermos in my topbox but decided to race for home instead. 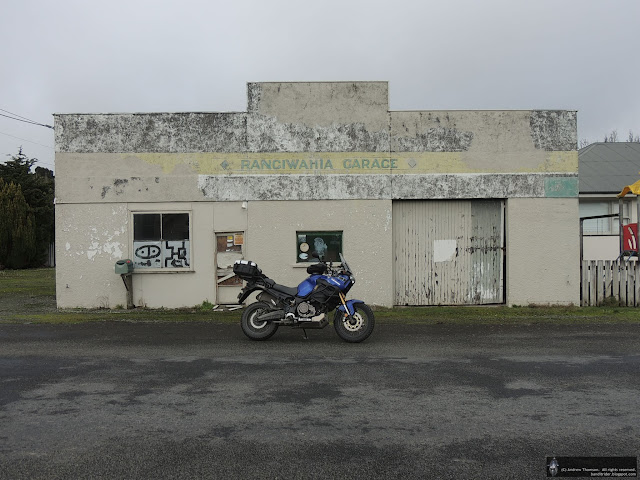 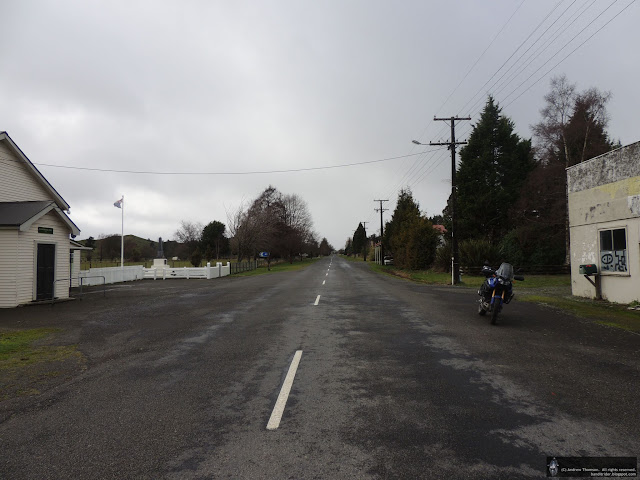 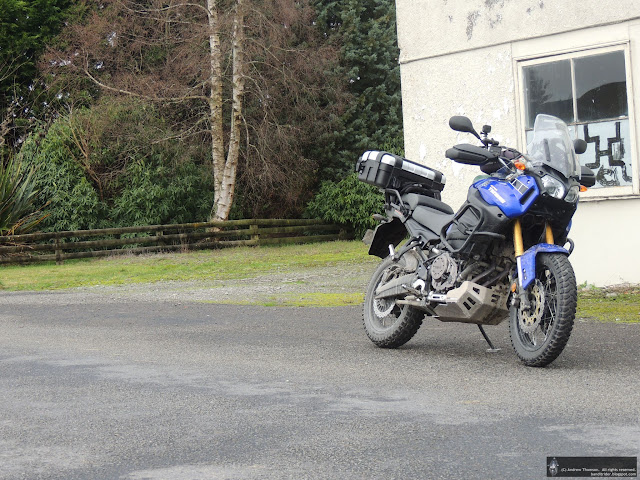 For the rest of the ride I kept the pedal to the metal and got to enjoy some fast, windy and sometimes slippery roads.  There was even rain at times with some of the worst just before home of course...

I eventually rolled up the drive just before 2 and after putting my baby to bed finally got around to having a late lunch and thawing out my feet.  Brilliant day out on the bike though - plenty of adventure and another 275km under the Tenere's wheels.  The E-07's were fantastic too - just one little slip on greasy tar and nice grip on the gravel!

I should really get off the 'net every now and again...

Yeah, I bought another gizmo.  This time it's yet another GoPro in the form of a Hero 4 session - they just happened to be on sale...

It's got some features that are better than my Hero 3 silver and some that probably aren't so great.  Better quality recording and a slightly smaller package (especially when you consider that the 3 needs a housing). 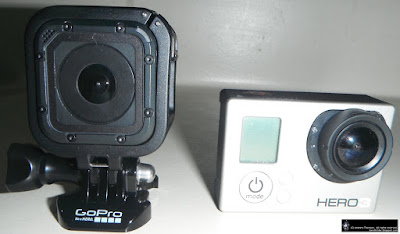 One of the disadvantages is that you can't swap out the battery but I did a wee search and for about $30 you can get a housing with a spare battery (extra 4 hours) outta China - I haven't bothered yet, we'll see if I end up needing it.  It theoretically can be charged on the go but bye-bye waterproofedness... 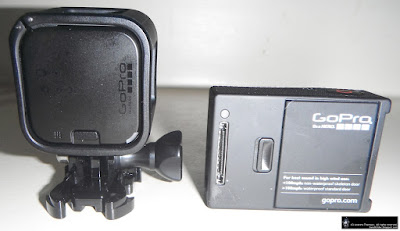 One nice thing is that I can control both cameras simultaneously with my remote. 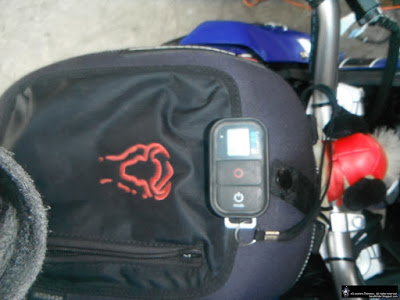 Anyway, I got it on Friday so I needed to try it out on the weekend eh?  I decided to try it up front on the Tenere and also to run the 3 pointing out the stern.  BTW: another neat feature of the 4 is that it knows which way up it is and will automatically flip the picture - on the 3 I have to tell it that it's upside down. 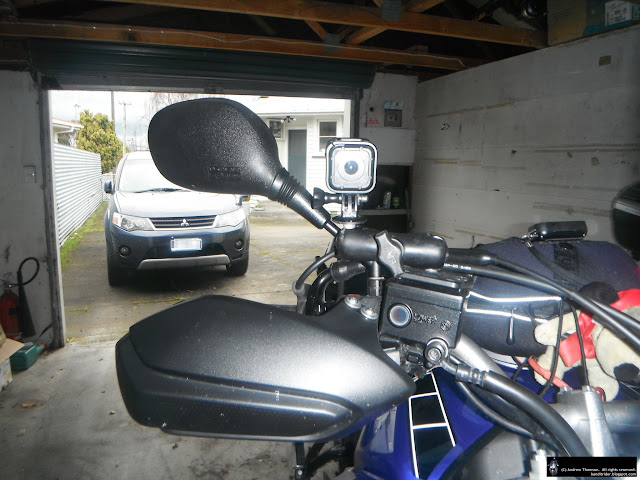 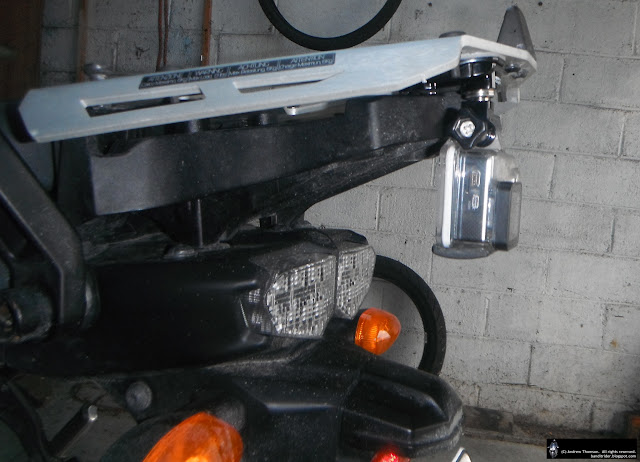 So after popping over to Feilding to catch up with my folks, sister & kids it was time to ride.

I had somewhere else to be but had plenty of time to take the not-so-long way via Colyton and Valley (sealed), Zig-zag and Finnis Roads (gravel).  The evidence is below:


The video didn't turn out too bad (and it's cool being able to do picture-in-picture stuff) but the audio was crap from the Session 4.  It apparently has 2 microphones and some smarts that are supposed to help cancel out wind noise.  It couldn't cope with the noise of a Tenere smashing its way through the air so I ended up using the audio from the 3 which had the benefit of being a bit more protected and being close to the exhaust...

Overall, it's cool to have 2 cams and more options for recording so I'm happy enough.  Let's see what other mayhem I can get up to with it...