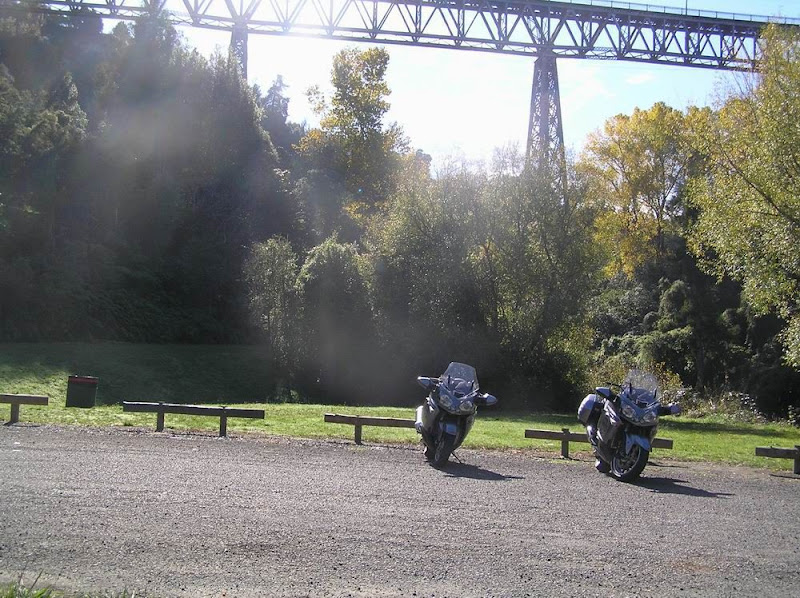 Another fine day and so another excuse to get out for a ride.

Today we headed over Highway 3 towards Wanganui but turned off just after Turakina, went through the back roads from Fordell to Hunterville before heading up the main drag to Taihape for some lunch.

The return trip took us back to Ohingaiti where we turned inland to Pemberton and then home through Kimbolton, Cheltenham and Colyton.

A nice little ride of about 270km bringing me up to about 370km total on the demonstrator...
Posted by Andrew Thomson at 3:12 pm No comments: 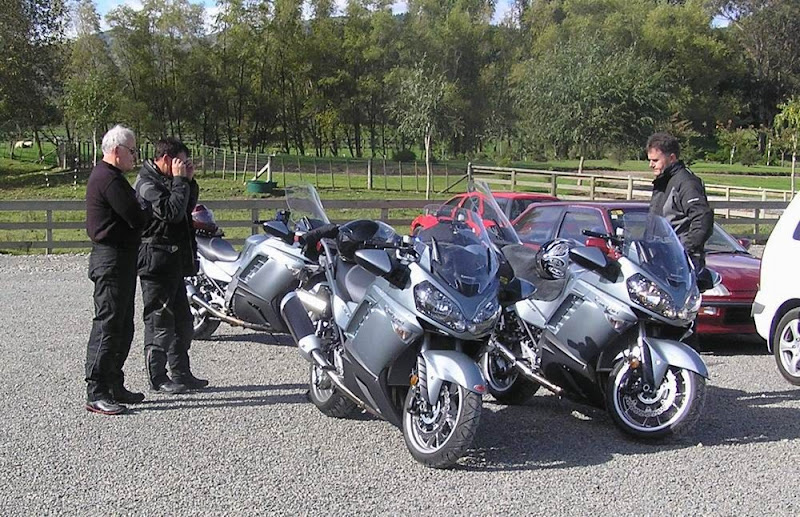 Went for a quiet little ride with Brian yesterday. We headed down to Levin to meet up with two other Connie riders who are interested in getting mufflers like Brian's.

Meet up with Peter & Robin at the Murrayfield Cafe and pretty soon we were hard at it checking out the bikes and enjoying a cuppa and a chat.

After the drinks break we all headed back to Palmy to introduce Peter & Robin to Cookie the man who is going be fitting their bikes up with nice stainless mufflers.
Posted by Andrew Thomson at 3:04 pm No comments:

Well it's been nearly 2 weeks without 2 wheels and it's been a struggle. Parts have still not arrived so the bike is still in the shop.

The good news for the weekend is that AFC have loaned me their Concours demonstrator so I can at least go for a little pootle this long weekend. Good stuff, but I'm really keen that the bike gets sorted ASAP and is back in it's shed - I would rather be riding my bike than someone else's...
Posted by Andrew Thomson at 9:27 pm No comments:

A few links on the Concours Owners Group's Forum regarding KIPass and other starting issues:

Beejeebus! I should have touched wood after my last post! The unthinkable has happened - technology has let me down. After a nice day out riding with a few of the local Kber's I stopped on the side of the road to take a piccy of them going pass - no problem - until I went to start the bike. The key would not turn and no matter what I did with the KIPass fob I couldn't get it to turn. Now what?

The others had carried on knowing that I'd catch them sooner or later so I was stranded at the top of Vinegar Hill. After fiddling and fluffing around with the fob and key some more I admitted defeat and grabbed my cell. I put a quick call through to Winton from AFC and outlined my wee dilemma. Luckily for him he had his boss's new V8 ute so he was happy enough to climb in it and head out on a rescue mission.
By the time he got to me I'd had a call from the others and Rottiguy also headed out to rescue some gear from my topbox and also give us a lift up onto the ute. By pure coincidence Winton's dad was also riding past and pulled in to help - it sure made it easier getting 300kg of bike up on the ute!
On the way back we stopped in at my place to see if the other fob or a fresher battery would do the business but not joy. So it was off into to town to drop it at AFC - it will be interesting to see what the verdict is come next week...
Thanks to Colin & Richard for the lift and especially Winton for dropping everything and coming out for the rescue.
Last time I stop for piccys like this: 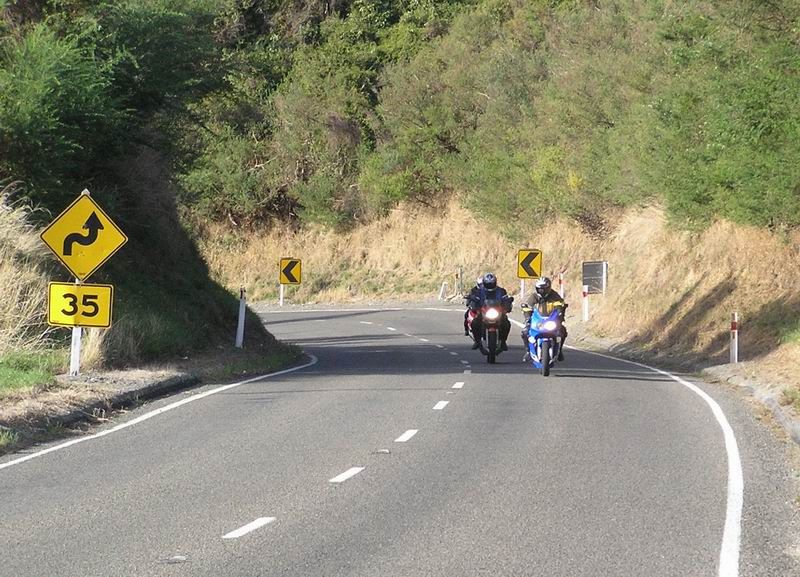 Posted by Andrew Thomson at 7:48 pm No comments:

I've been spending a bit of time checking our the Concours Owners' Group's Forum and there has been the odd bit of debate over some of the extra electronic doo-dads fitted to the Concours - namely the KIPass and the tyre pressure sensors.

Arguments against go towards the cost they add to the finished bike and possibly to maintenance or failure further down the road. Arguments for are mainly usefulness and bling-factor.

Personally I like the KIPass (love just leaving the key in the bike and walking off) and I'm an absolute fan of the tyre pressure sensors after my experience with a slow leak in my rear tyre on the Mini's Return. Cycling through the displays on the screen every now and again (gotta check on that fuel economy yanno) I was able to pick up that the rear was loosing pressure slowly before the loss of pressure started affecting the handling - this is a great safety feature that every bike should have! As Mark said - he would have had no idea if the same thing had happened to him until he started slithering around (just like me on the 2005 Southern Cross).

I was also able to keep a close eye on the pressure and stop when required for more air and consequently made it around the Coromandel in one piece.

So I'm well and truely a convert to new technology designed to be helpful being introduced to bikes. Ok, it may have added to the cost of the Connie but in a few years it'll be that cheap that every 250 has it. And as for reliability etc - how often does anything electrical break down these days?
Posted by Andrew Thomson at 8:30 pm No comments:

Some Southern Cross riding buddies are off for a bit of a ride. They're doing Oz in 60 days - sounds like a blast. You can find Brett's blog here. 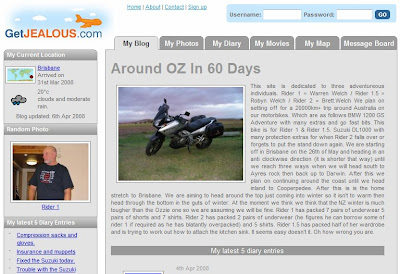 Posted by Andrew Thomson at 8:06 pm No comments: 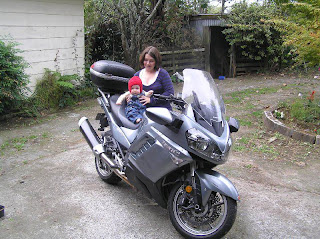 Meet Billy the Kid. He is my little nephew and is now a big time Kawasaki fan!


I popped up to the Taranaki for a quick visit this afternoon and thought that it was just about time that Billy was introduced to the joys of motorcycling. Next time I go up maybe he'll be riding around all over the farm?


While I don't normally enjoy the ride up to Inglewood - a bit boring and the road can be crawling with cops - today was a bit different. It was the first time I'd really been on the bike since the Mini's Return and it really was nice to be back on the road eating up the k's.


The ride up was pretty uneventful apart from a few spits of rain around Waverly. Coming back for some reason was a bit more fun: there was actually a bit of light rain and the roads were a tad slippery in places. It also got dark early (forgot that that happens when you wind the clock back) and I enjoyed sitting back cruising - starting to get a bit cooler now though, the heated grips got turned on... 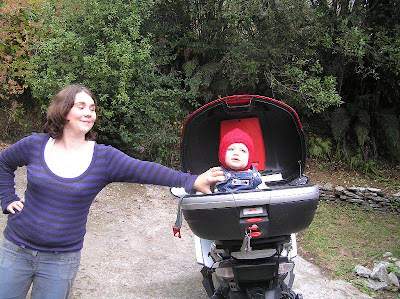 Posted by Andrew Thomson at 7:42 pm No comments:

How Harley Rider's start out!

Posted by Andrew Thomson at 8:07 pm No comments: