A bit of video from Neil as he tried to get Colin, Paul and myself on cam.  Lucky we were all behaving...

Posted by Andrew Thomson at 7:49 pm No comments:

The weather here on Saturday was perfect again and I managed to get in quite a bit of walking and also attend the Anzac Day Dawn Parade but no riding.  Luckily Sunday was nearly as nice and during a phone call from Neil in the morning a plan was hatched to meet up for lunch in Hunterville followed by a short pootle.

I left Palmy a bit earlier so I could drop something off in Feilding and then made my way to Hunterville via Vinegar Hill.  It was a superb ride but I had over estimated how long it would take me to get to Hunterville and got there very early.  Never mind, I got myself some lunch and settled in to wait for the others. 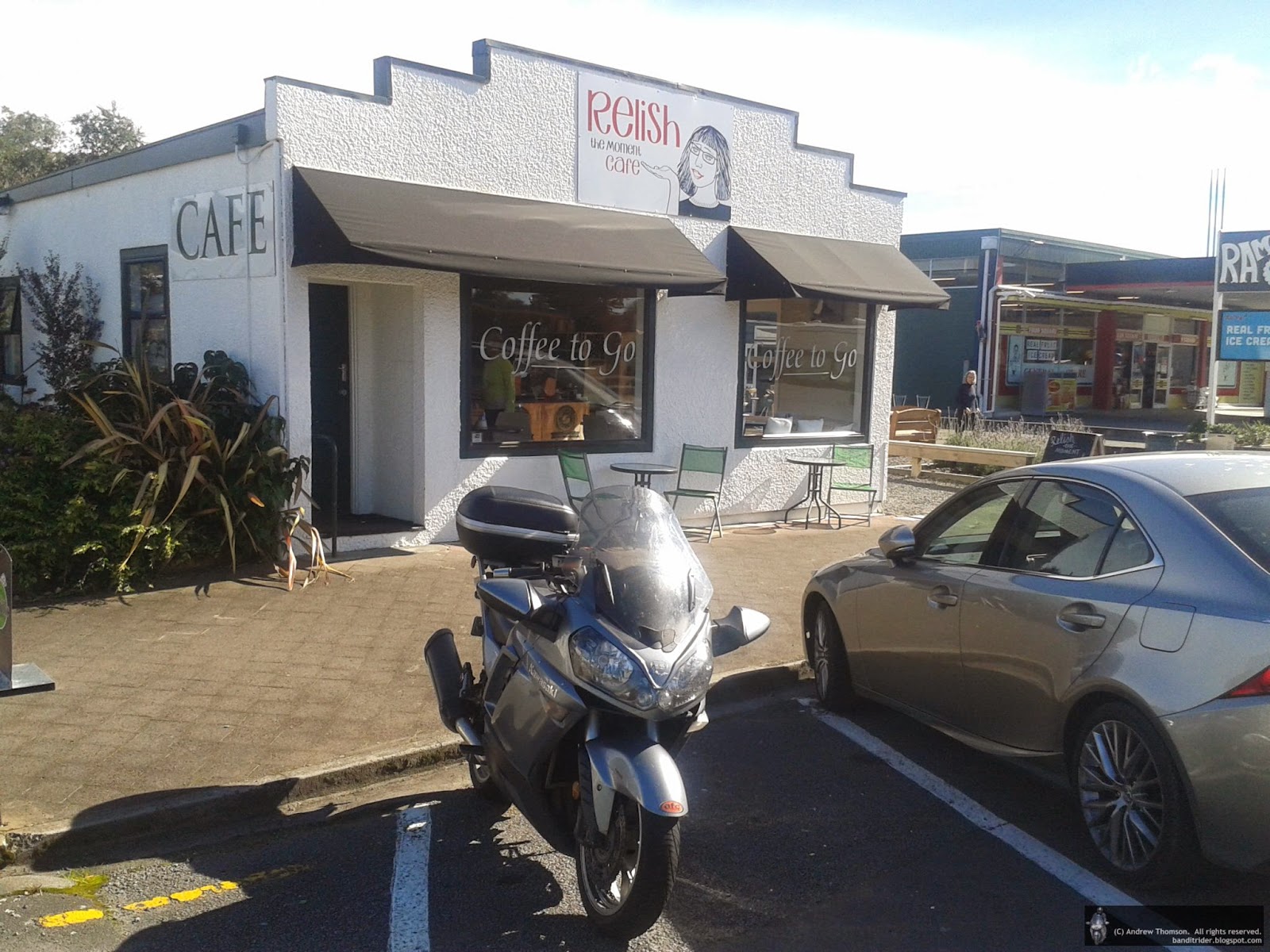 First to arrive was Colin and after he'd ordered his lunch we sat outside in the sun to await the other two.  12:30 came and went and we started to wonder where they'd got to.  The finally rolled up about ten minutes later having stopped along the way to talk to a nice man in a Commodore...

We eventually got away sometime after 1 and our first leg was through to Fordell and Okoia to Upokongaro.  Leaving Hunterville I had a nice little scare when a hawk flew up out of the side of the road - I actually had to change line mid corner but managed to miss it and it's beak and talons... 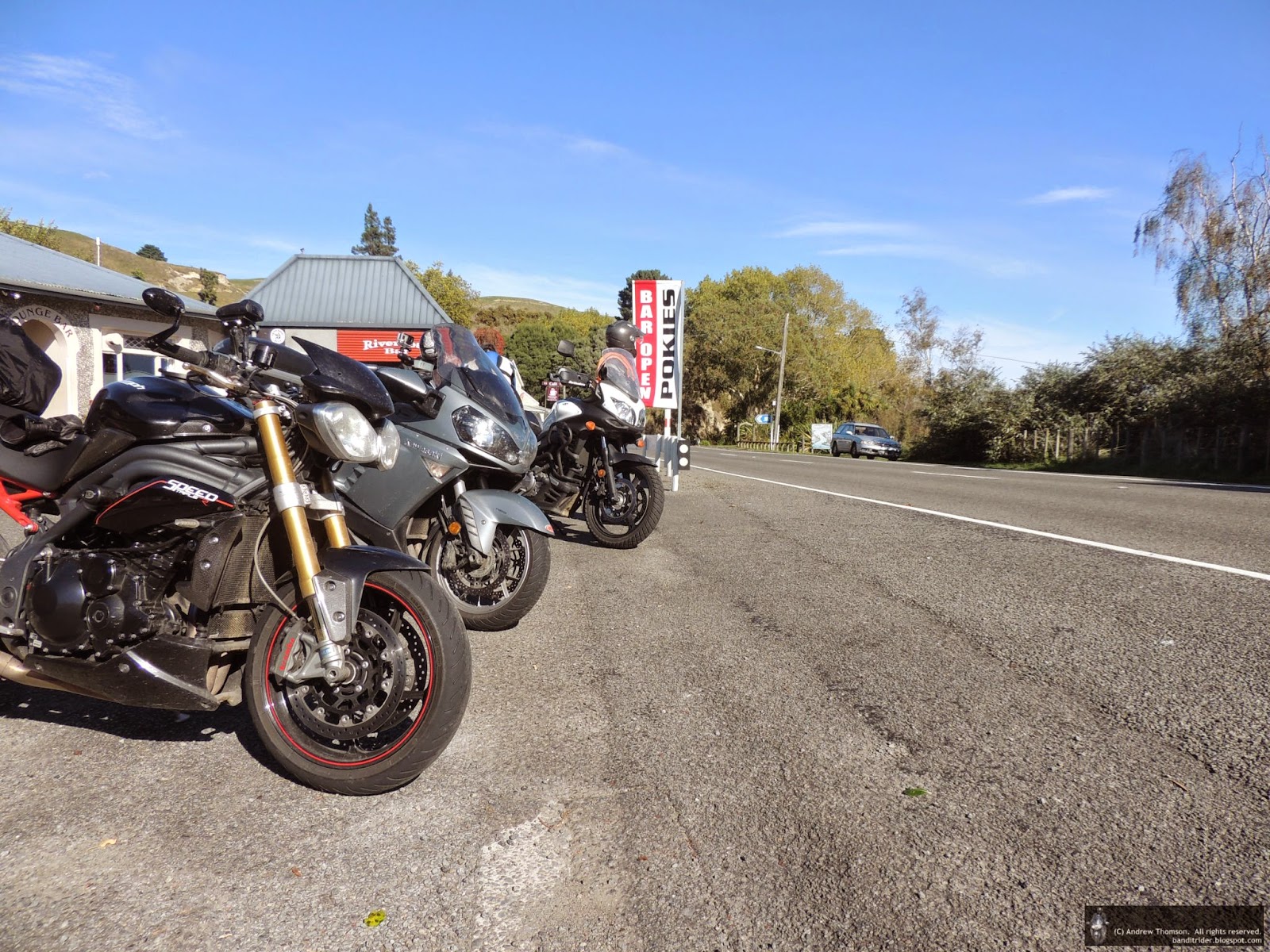 Next up was the fabulous Paraparas.  And after the first little squirt up the hill we stopped for a few more piccys. 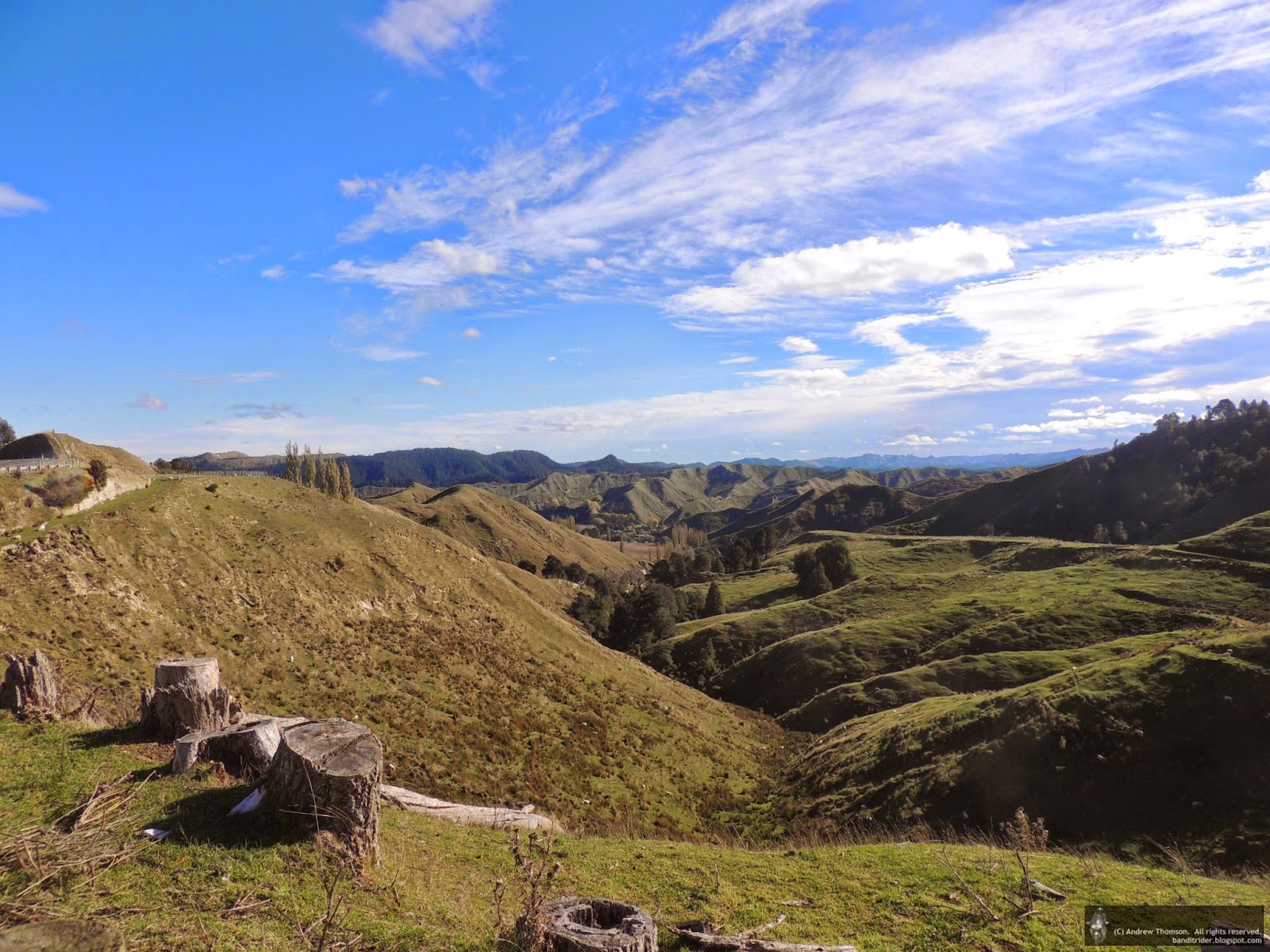 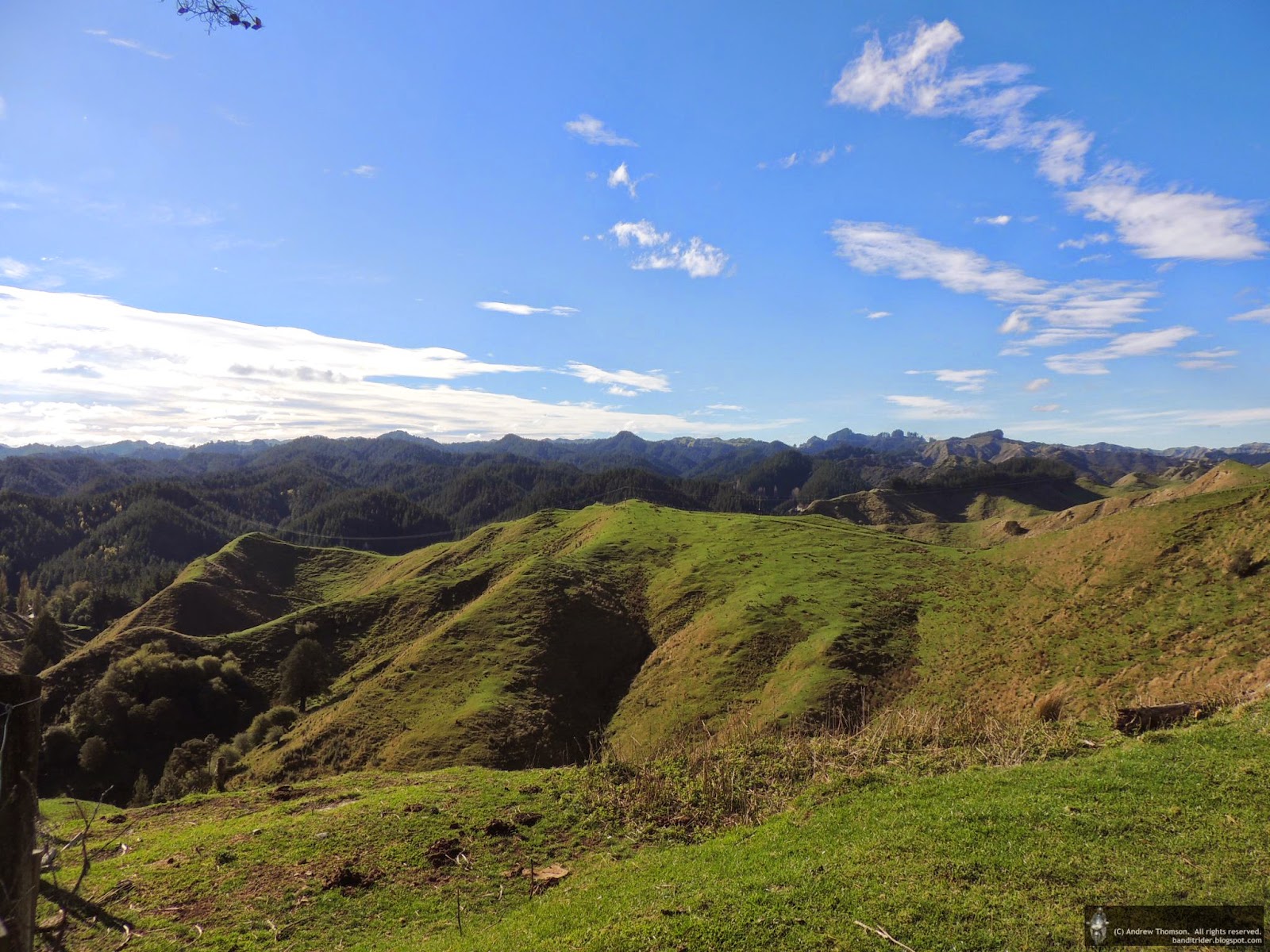 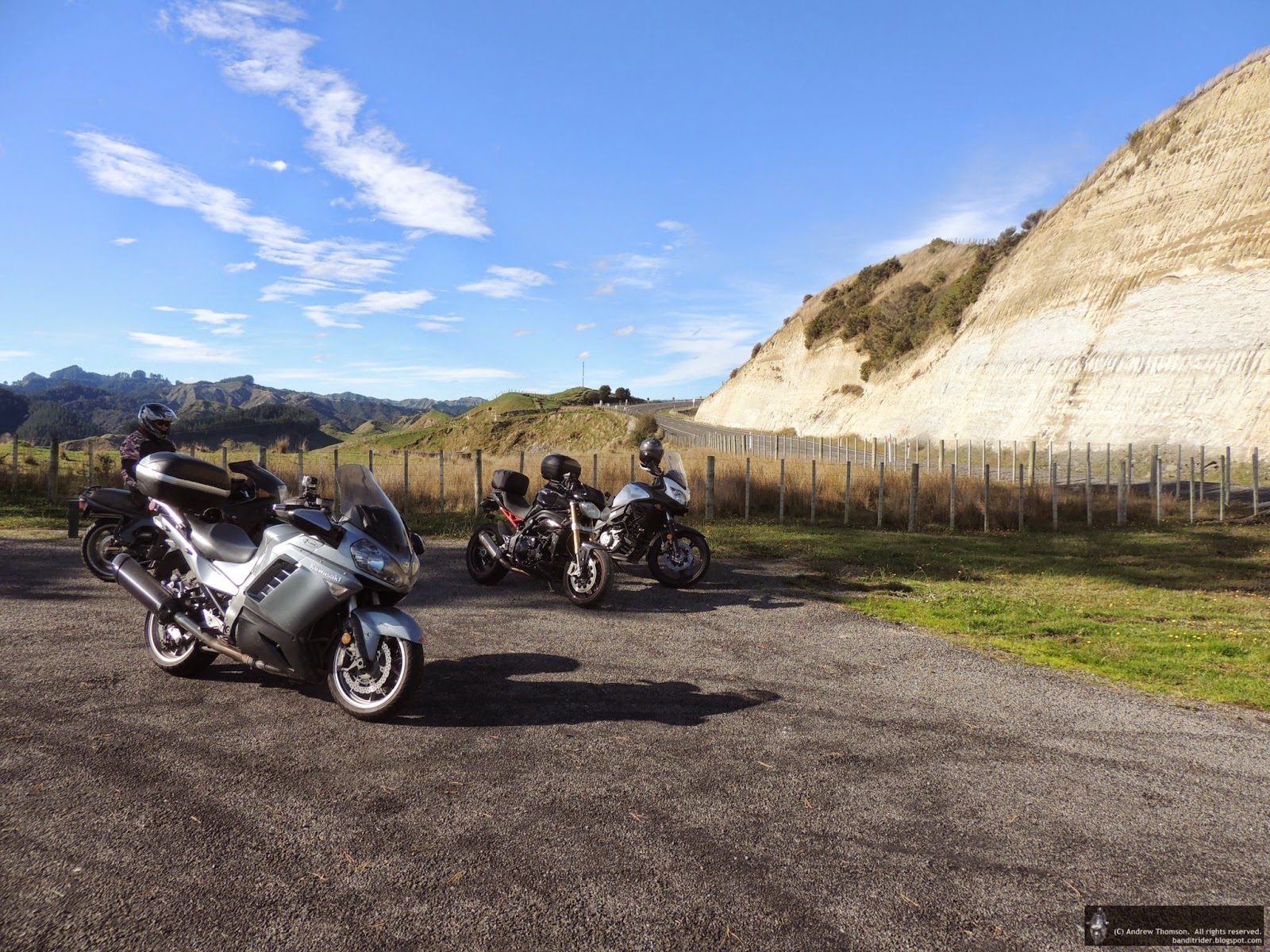 Then it was on to tackle some more sweet curves.


At the turn-off to Fields Track we stopped to say goodbye to Paul and his K1 as he carried on up the main road and we opted for the stunning ride through Fields Track.


This time it was Neil's turn to have to deal with feathered hazards.  He disturbed a good sized turkey and had to take evasive action - all right in front of me.  The only shame was that the GoPro was snapping pictures and I didn't get it on video...

At the SH49 turn-off Neil and Colin went left to Ohakune while I went right and started to trundle my way home.  It was a bit chillier up this end of the country but still lovely riding conditions.

I caught up to a M109 coming into Waiouru and sat behind him most of the way to Taihape where I stopped briefly to top up the bike.  My next leg was a short 20km to Mangaweka where I turned off to ride through to Rangiwahia and Kimbolton again - another great piece of road!


More enjoyable riding soon had me in Colyton and then there was just another 15km or so to get me home.  Yet another great autumn ride - here's hoping the weather stays good for next weekend's BRRBT ride!

At a local dealer... 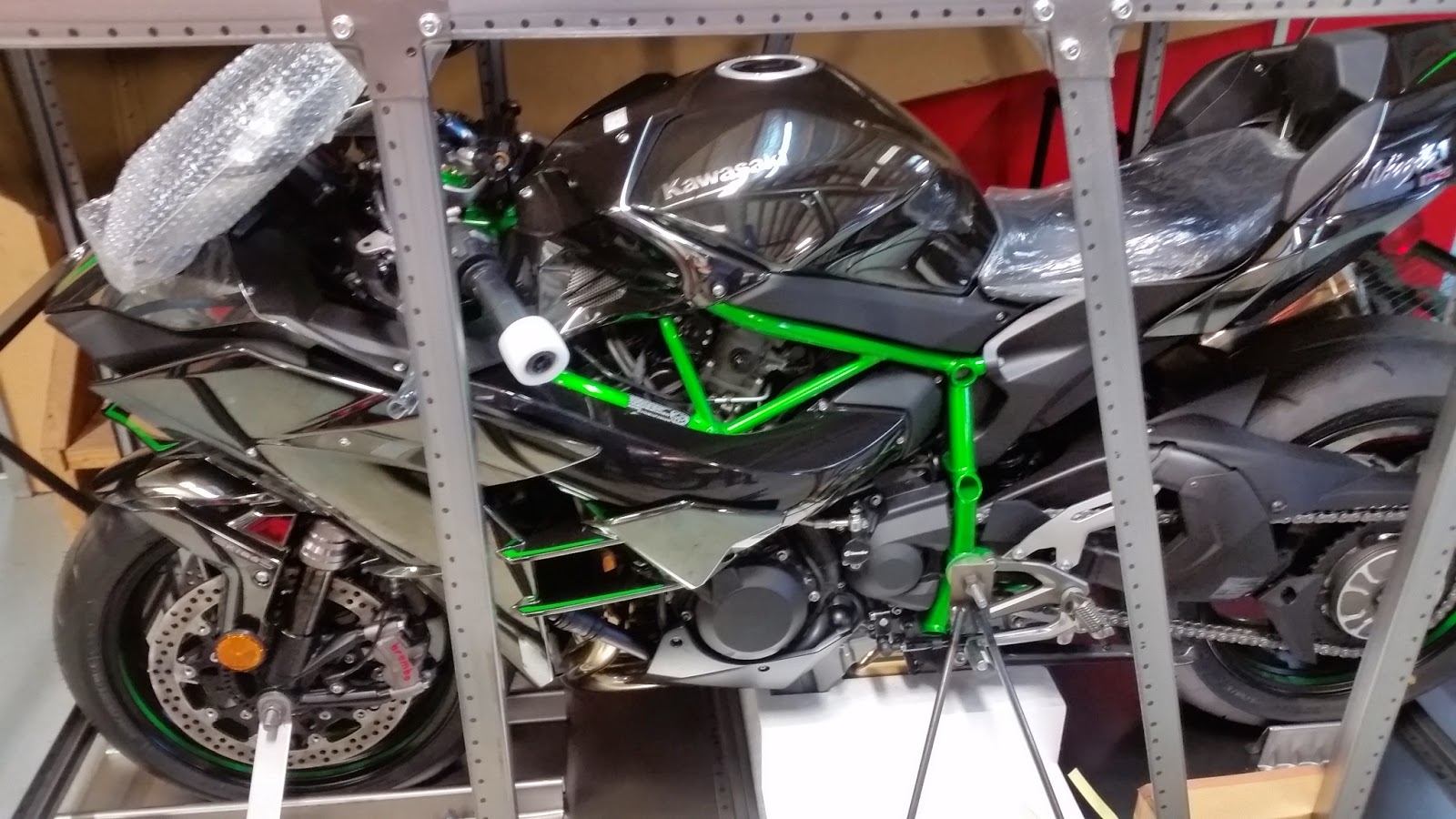 Posted by Andrew Thomson at 7:13 am 6 comments:

What to do when the weather's bad... 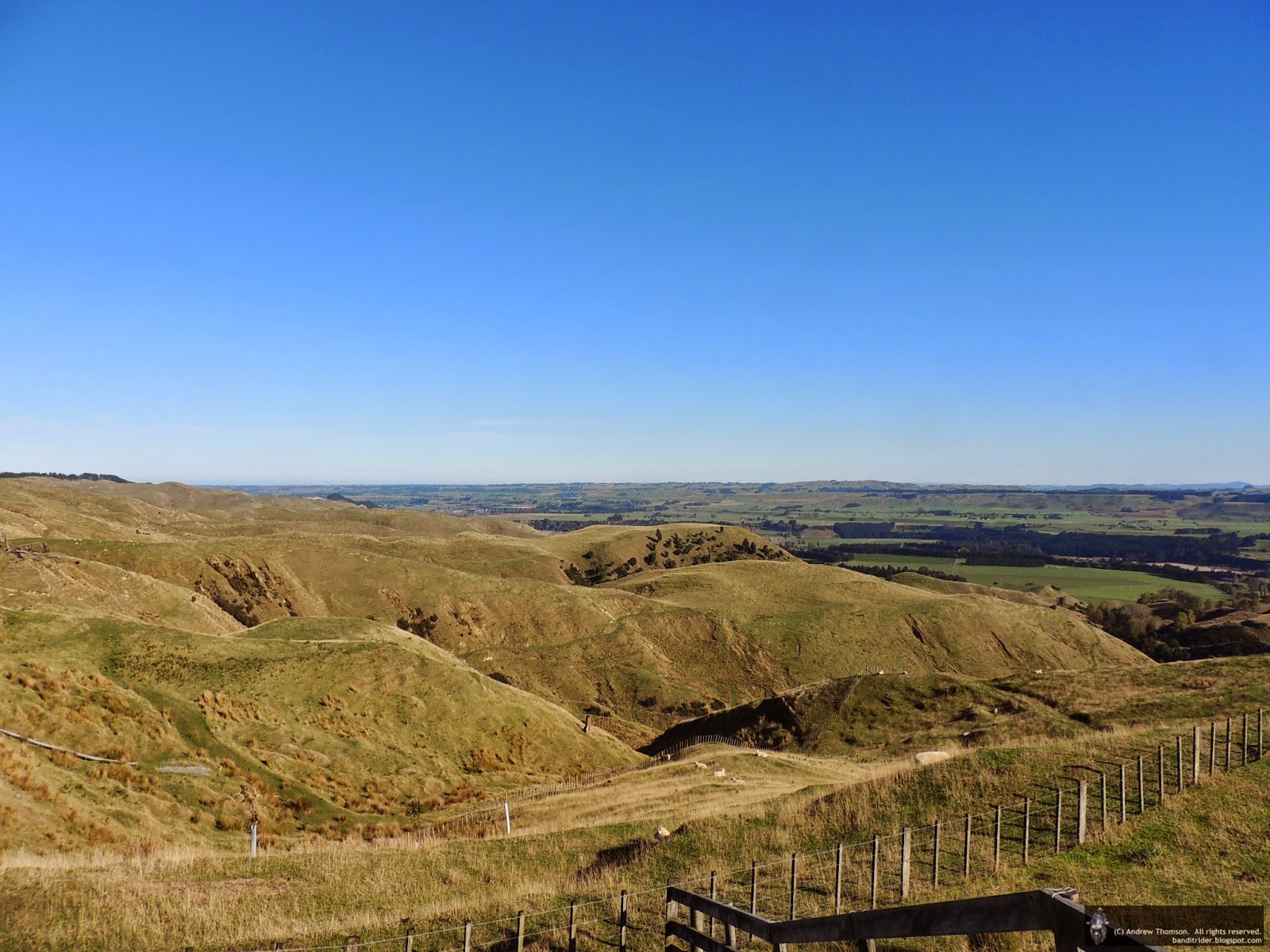 Yes, Sunday was what we like to call - a pearler!  So it just couldn't be wasted!

Neil had already been talking about going for a ride on Sunday so we made plans to meet in Taihape and then go play on some delicious back roads.

After putting the liners in my gear (not really necessary) I fired up the Connie and pointed it Northwards.  Within about 2 seconds of hitting the open road I was grinning and singing away to whatever the Senna was pumping into my helmet - be glad you could not hear me.  The day was truly spectacular and it was fantastic to be out enjoying it on my favourite horse.  I forced myself to stop at the lookout on Vinegar Hill just so I could hopefully capture a bit of a taste of what the conditions were like. 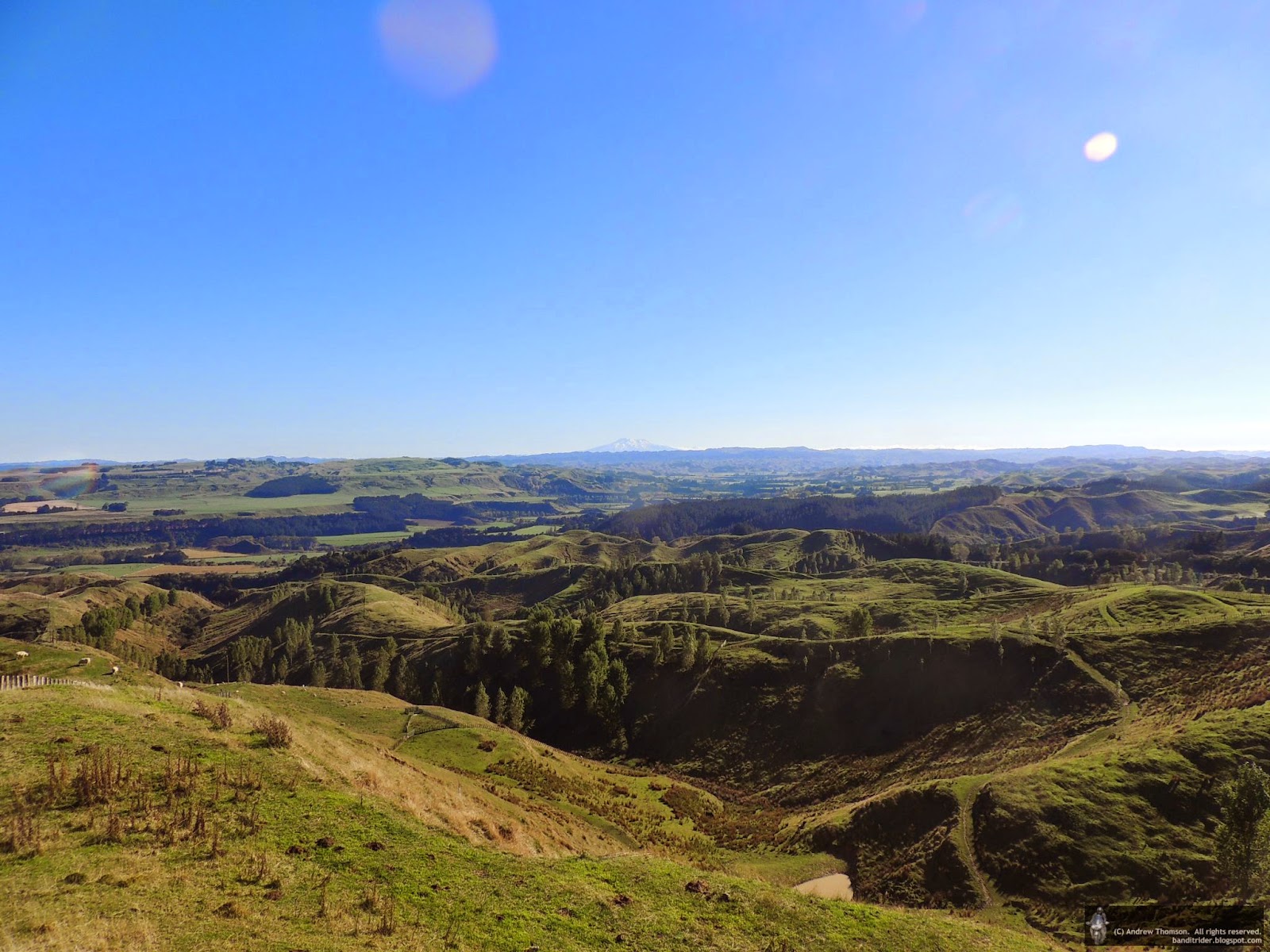 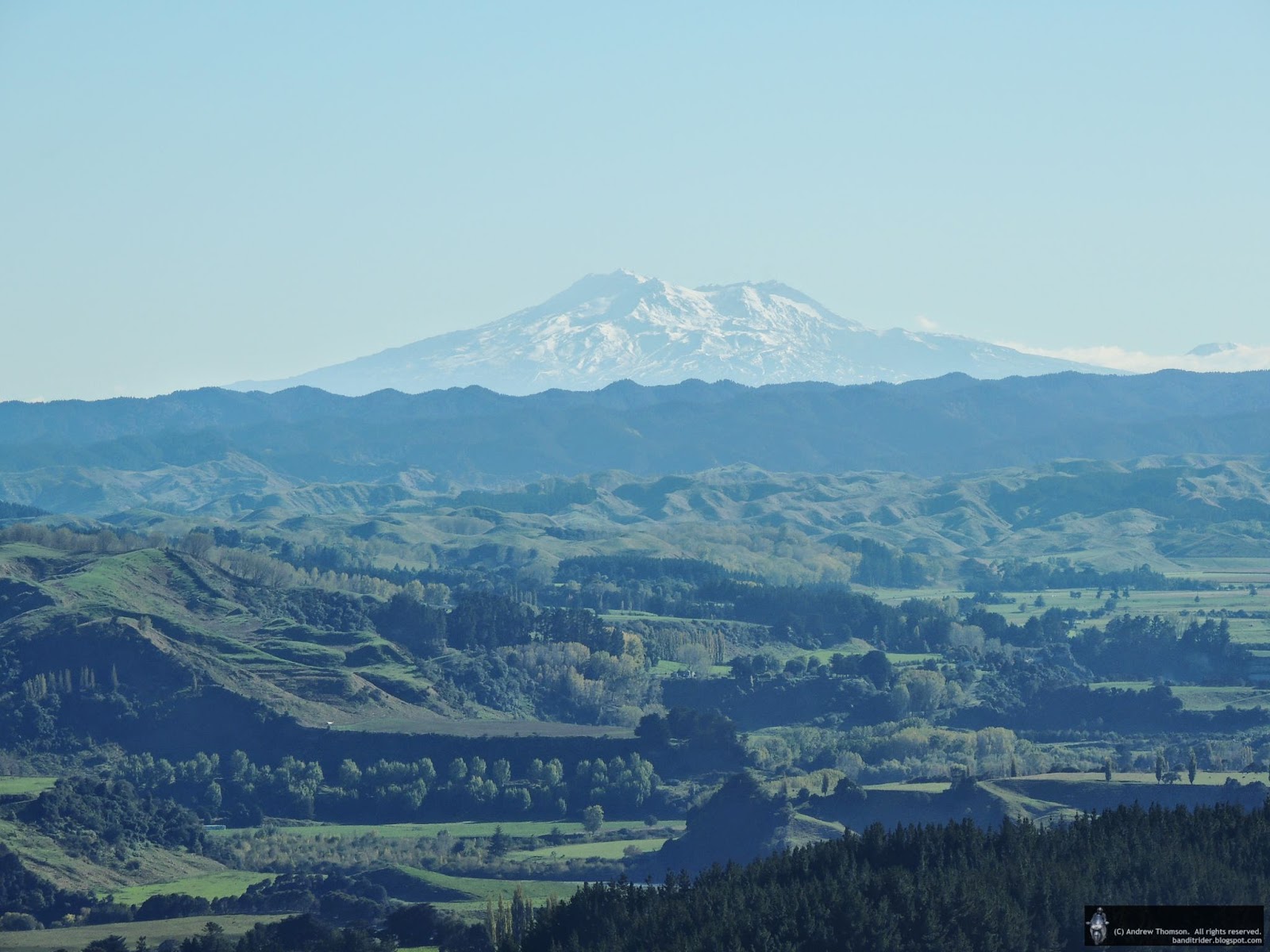 Back on the road, the rest of the ride over Vinegar Hill was a hoot but a 40km stretch of SH1 at careful pace (plenty of time to enjoy the day though) to Taihape followed.  In Taihape I parked up next to Neil's Speedy and some other bikes and had a coffee while catching up with Neil.

Coffee's downed we geared up again and I followed Neil South out of town.  We turned off SH1 not far down the road and started on our way to Rangiwahia on Toetoe Road.  I'd only been through here once before and this time around I was going in the opposite direction.  It's a nice little drops down into a pretty valley and onto Potaka Road.

Eventually we were onto the more familiar road through to Rangiwahia and then onto Kimbolton.  This is always a great road with little traffic and plenty of great curves.  Just out of Kimbolton we stopped at what is probably a familiar spot to regular readers of this blog for a few more pictures and to rave about the beautiful day. 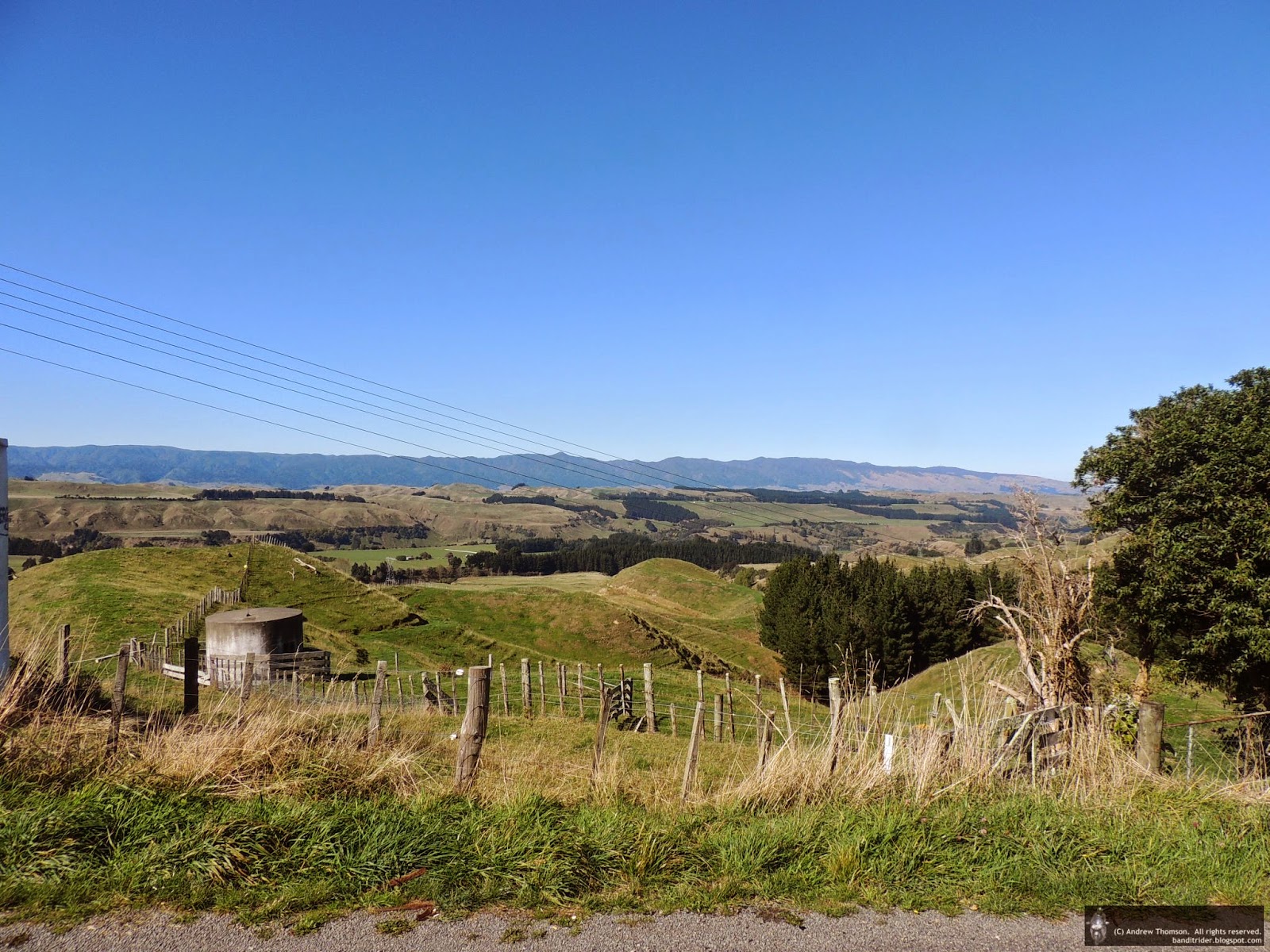 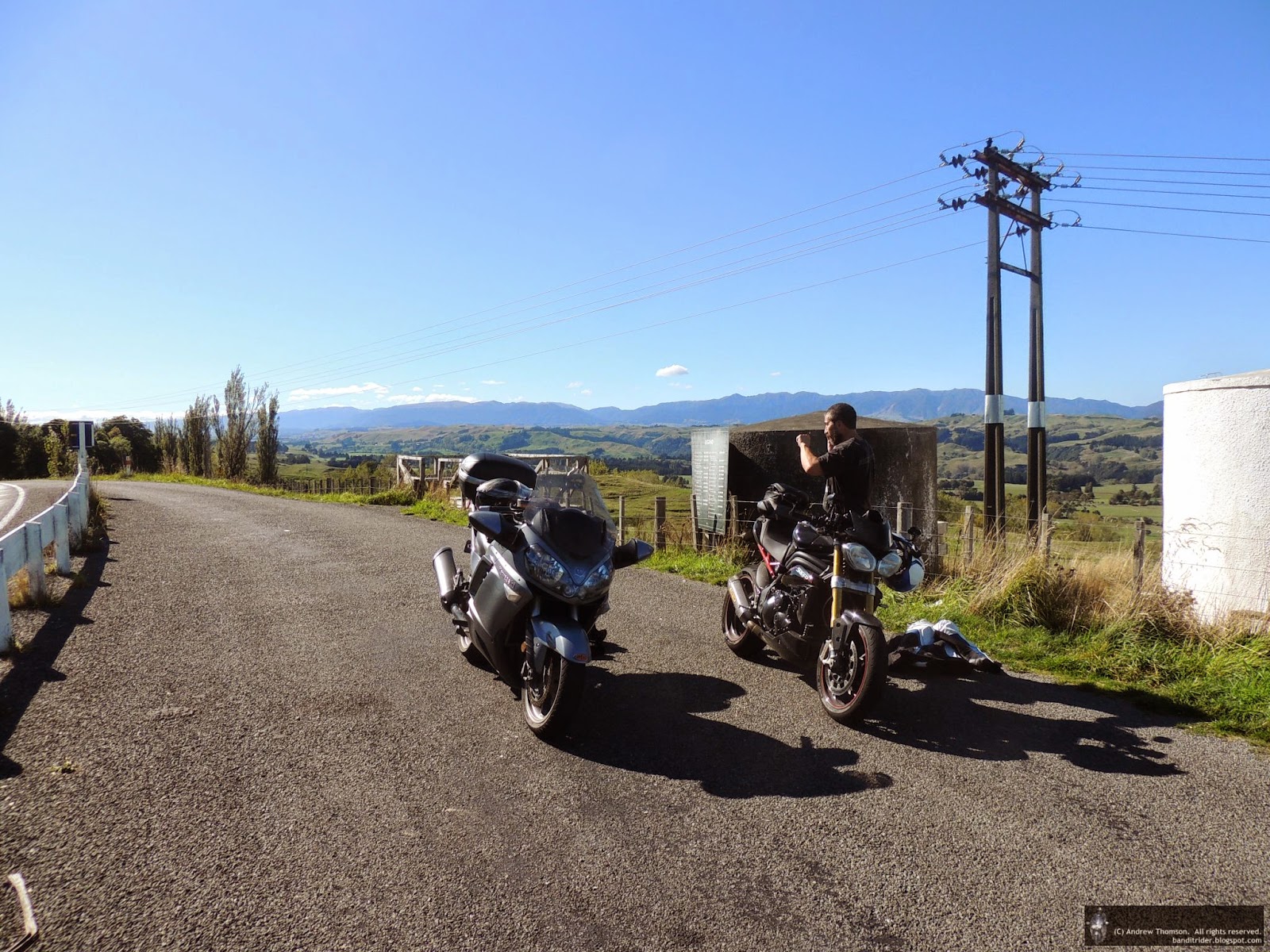 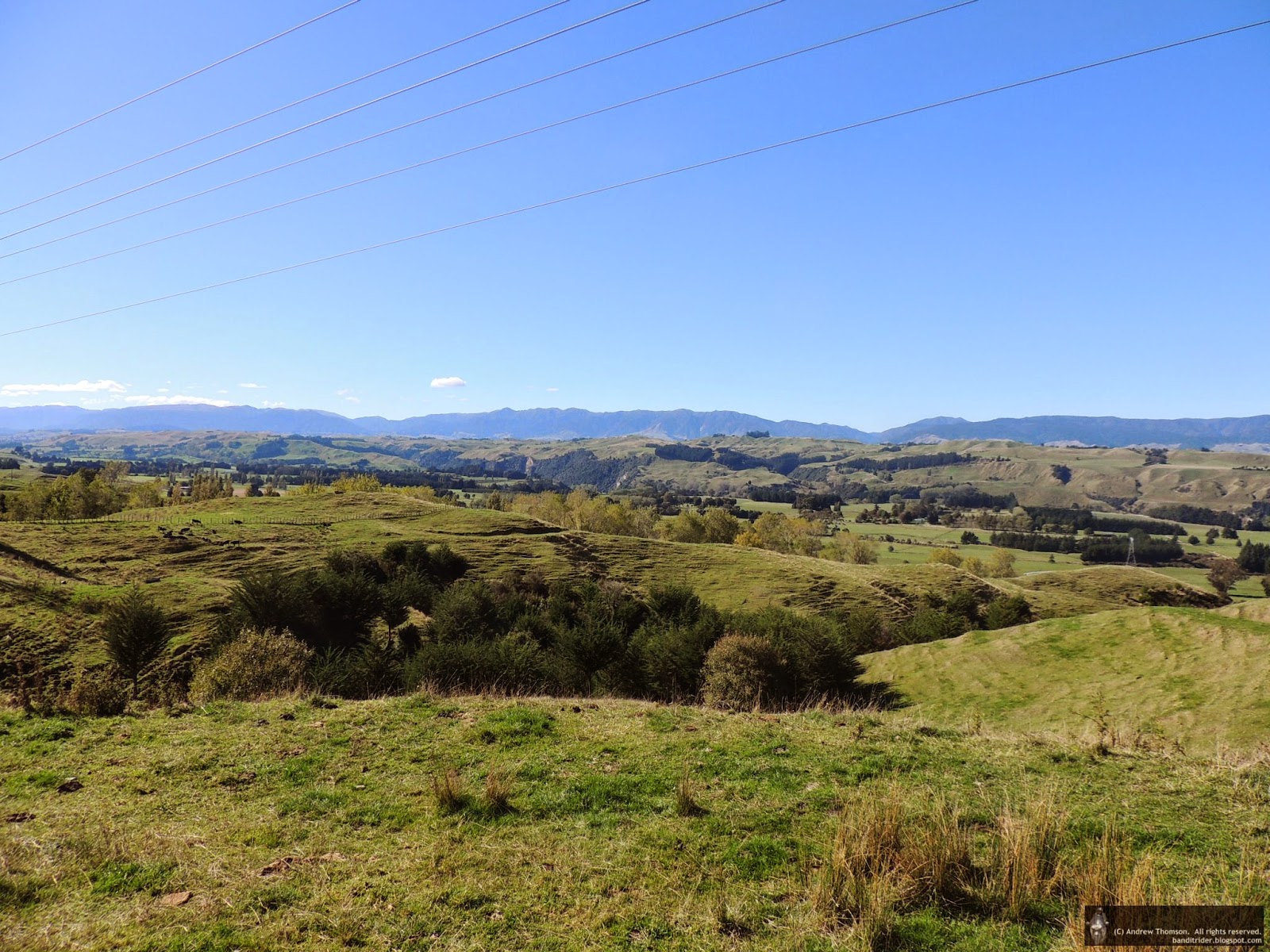 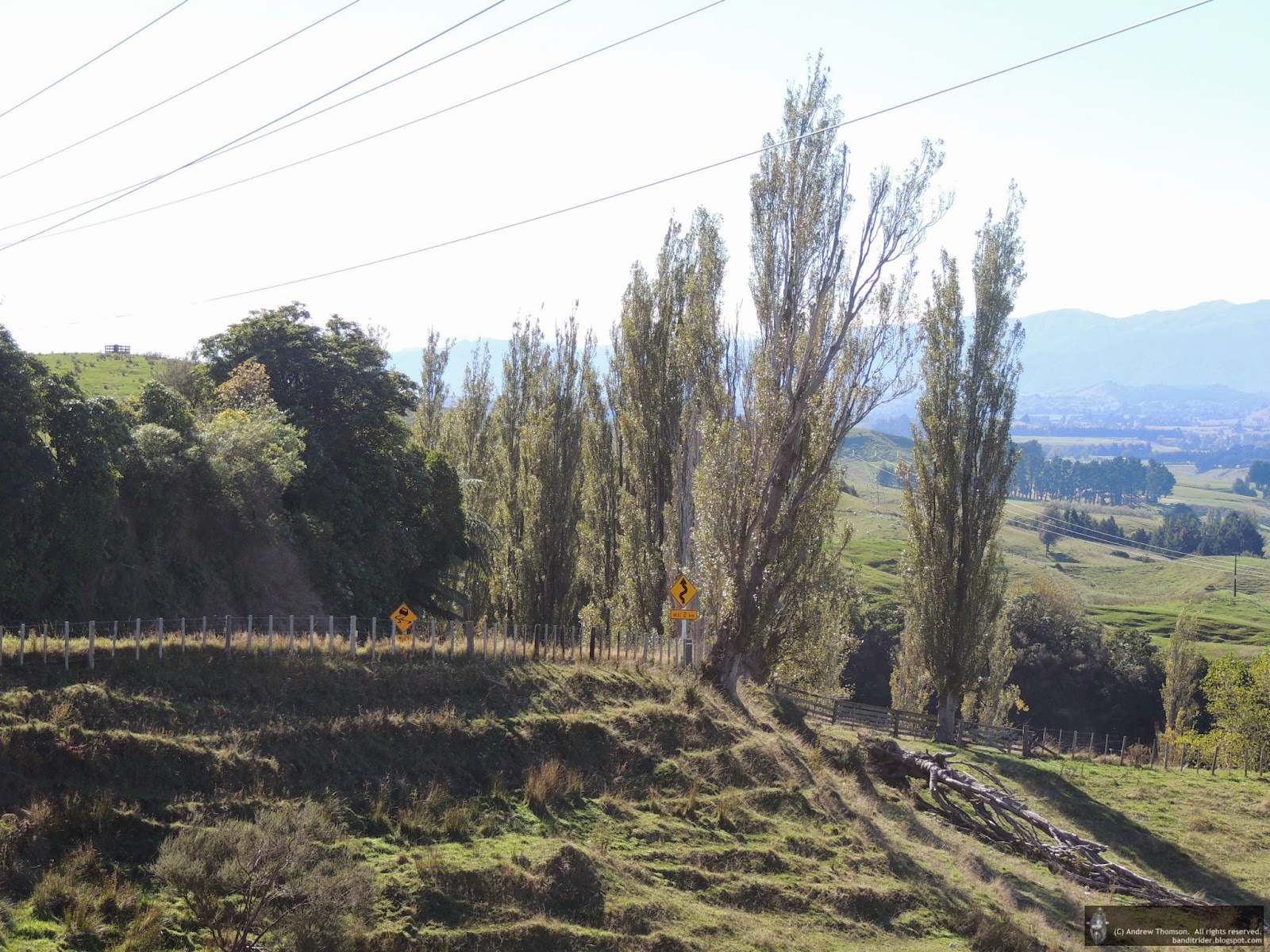 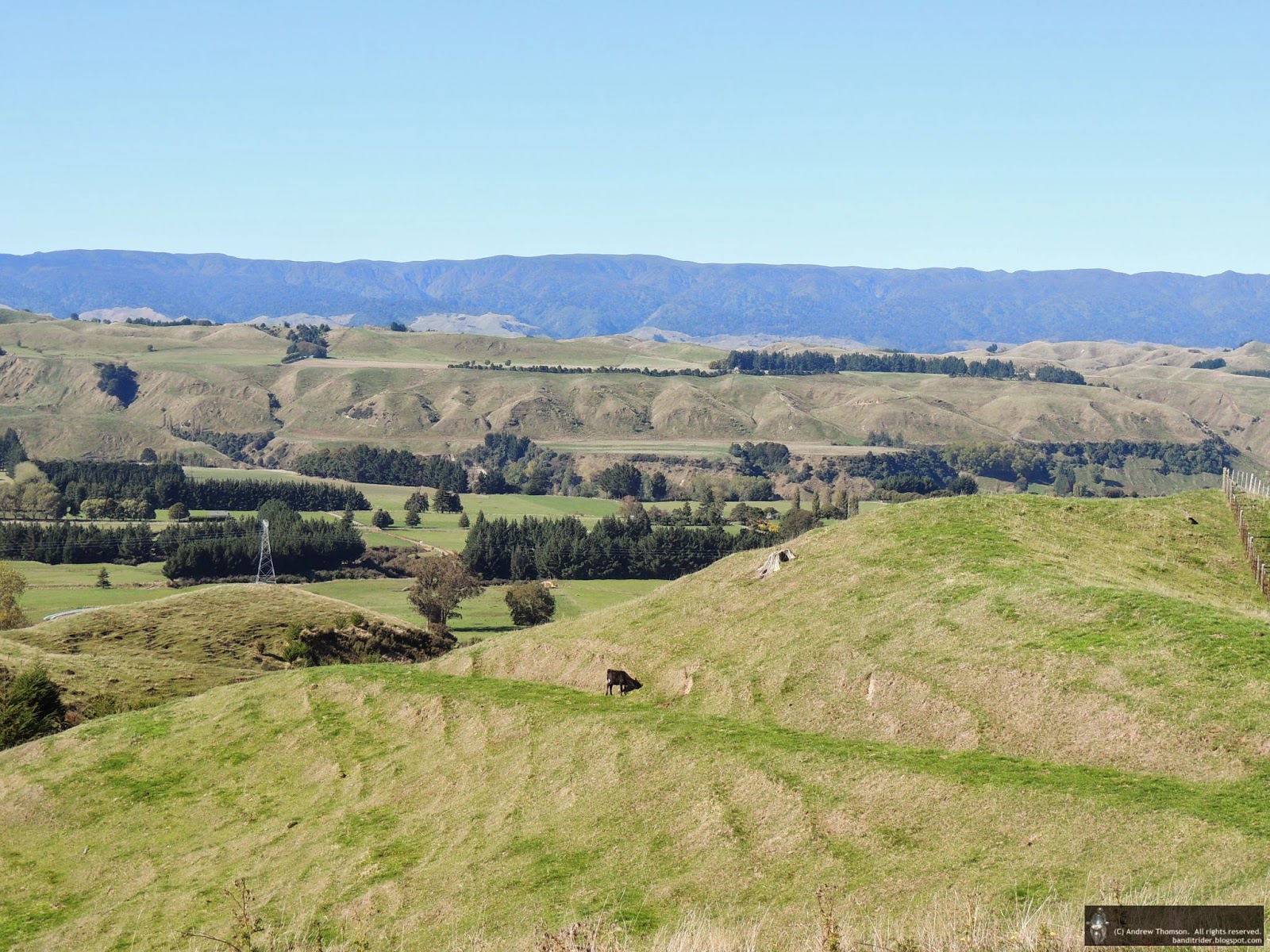 We spent about ten minutes just sitting in the sun and could have stayed there all day but eventually we had to go.  We crossed over onto SH54 again and made our way over to Halcombe to catch up with Wee Colin.  Here we harassed him for not coming riding while forcing some of his hot homemade soup down (it was terribly good).

Neil and I then parted company as he turned and headed for Ohakune while I scooted home via Feilding.  A truly stunning autumn day and a great way to spend it!

Some more video from Sunday from aboard Nev's Speedie:


Posted by Andrew Thomson at 8:14 pm No comments:

Sunday was our monthly Black Top ride and for this month I'd planned a trip down one of my favourite roads - Route 52.  Route 52 is windy, bumpy and narrow in places but it is a lot of fun and it was time to show it off to some of those who hadn't ridden it before.


As per our last ride we met out in Ashhurst and this month we had a decent sized group with I think thirteen of us in the end.  There were a few new riders to the group and also a few new bikes being ridden by some of the regulars. 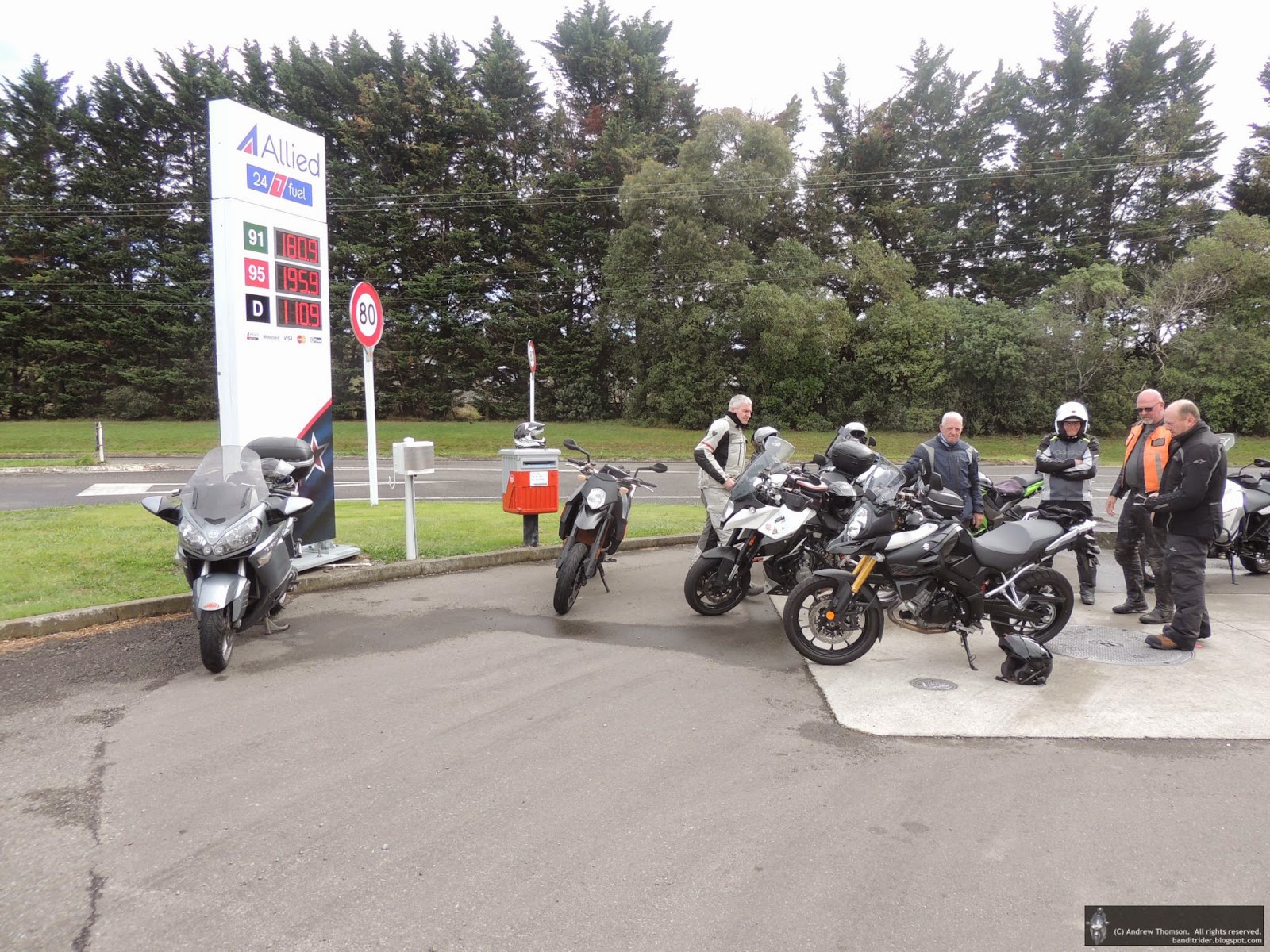 Our route over into the Bay took us up over the Saddle again and while there was less gravel on the road, a light rain had turned some of the clay on the road into some pretty slippery mud - a bit of excitement early on in the ride...

After the short adventure ride we made our way through to Dannevirke where some fuelled up before the trip through Ormonville and Takapau to Waipuk where we stopped for an early lunch. 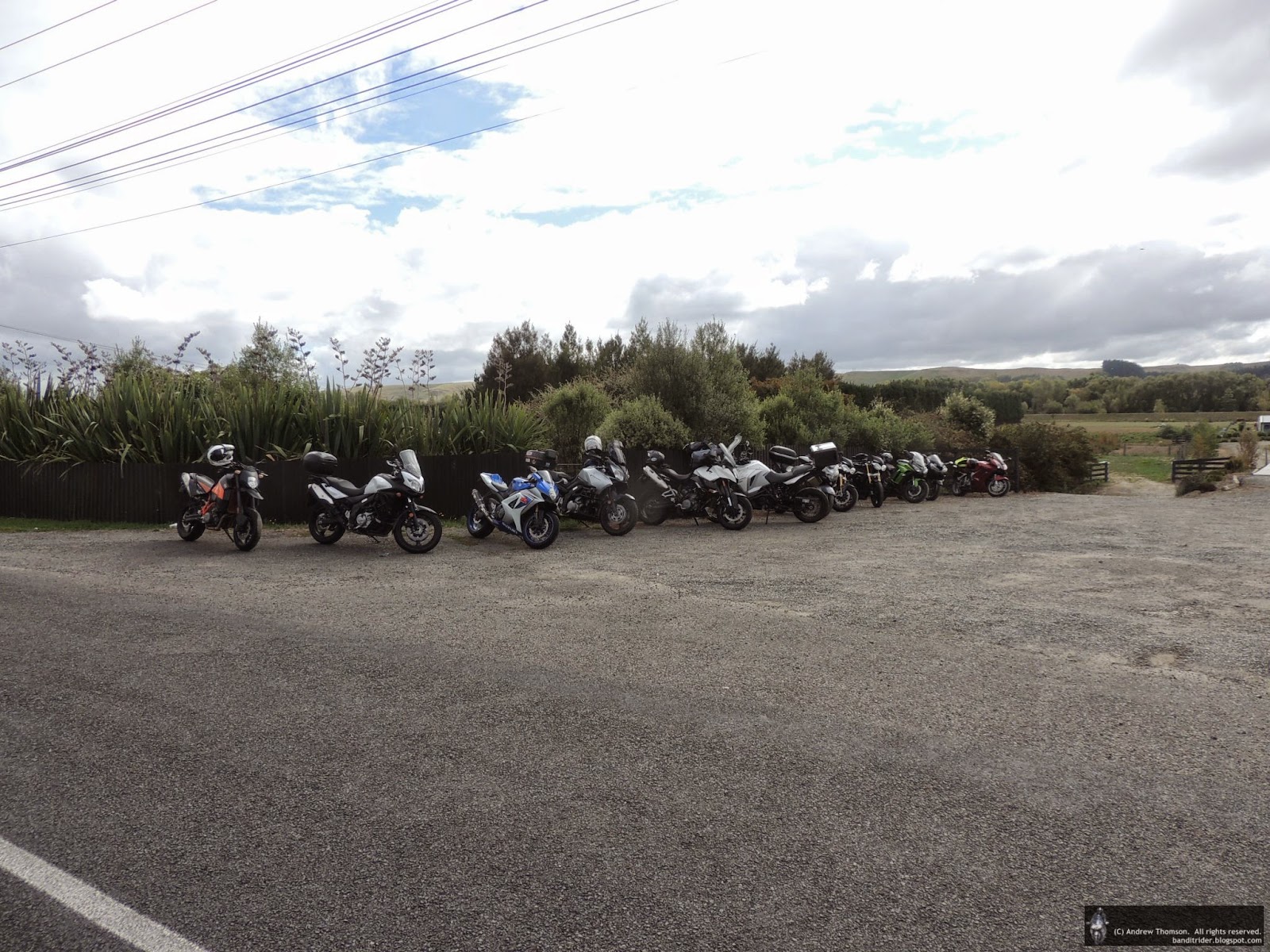 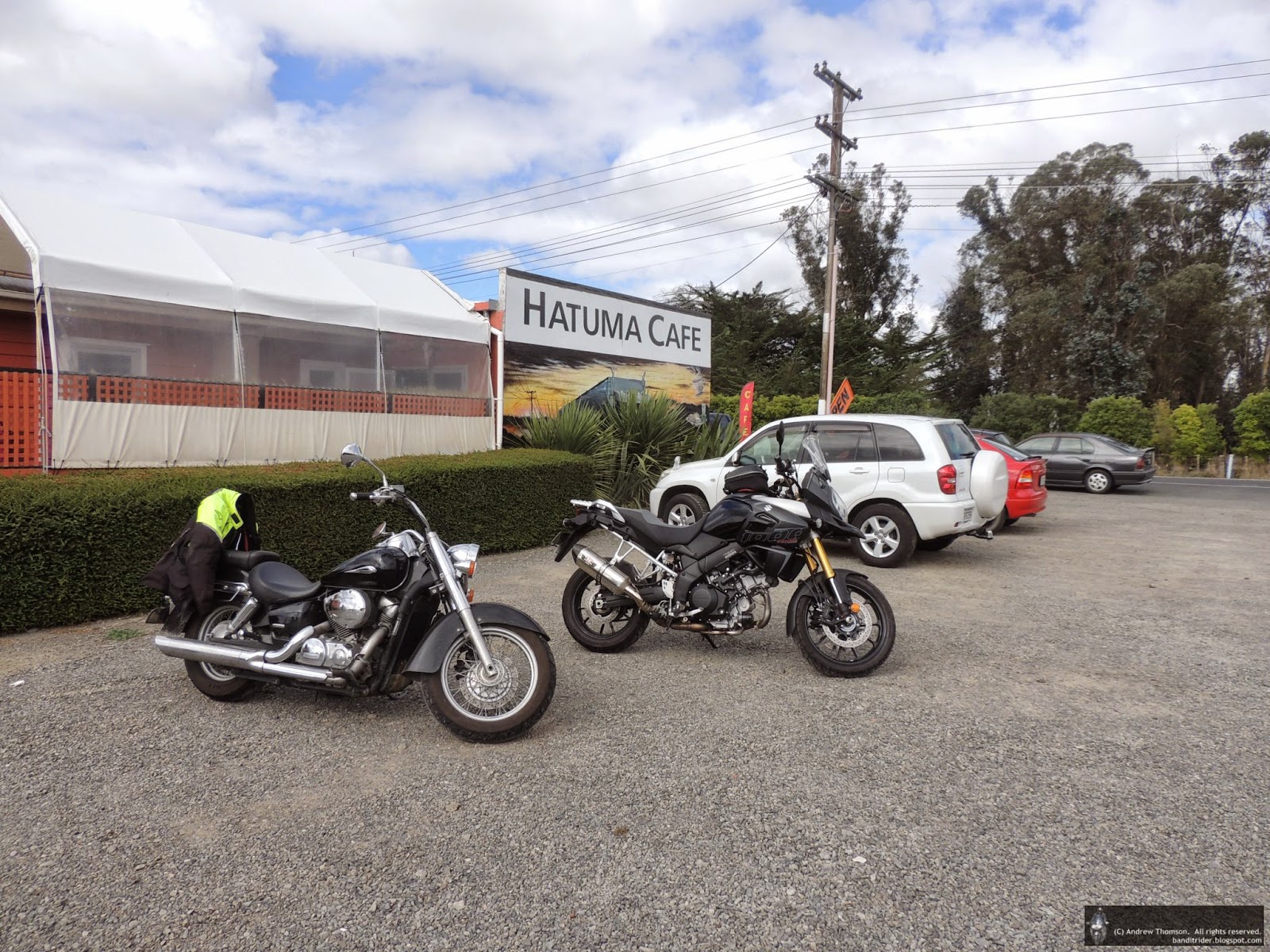 After lunch we made our way out of Waipuk and onto Route 52.  The ride through to the turn-off at Porangahau was particularly nice with only a few small sections of new seal to slow us down a whisker - otherwise it was just one nice smooth flowing corner after another.

We had a brief stop at Taumatawhakatangihangakoauauotamateaturipukakapiki- maungahoronukupokaiwhenuakitanatahu just in case any of the guys hadn't got a picture of their bikes in front of the sign and then carried on South to Wimbledon in search of wombles.
From Wimbledon the road gets a bit rougher but we took things fairly sensibly and eventually rolled into Pongaroa where every ute in the district was parked up with fresh venison piled up in their trays.  Obviously a bit of a hunting competition to celebrate the start of the "roar". 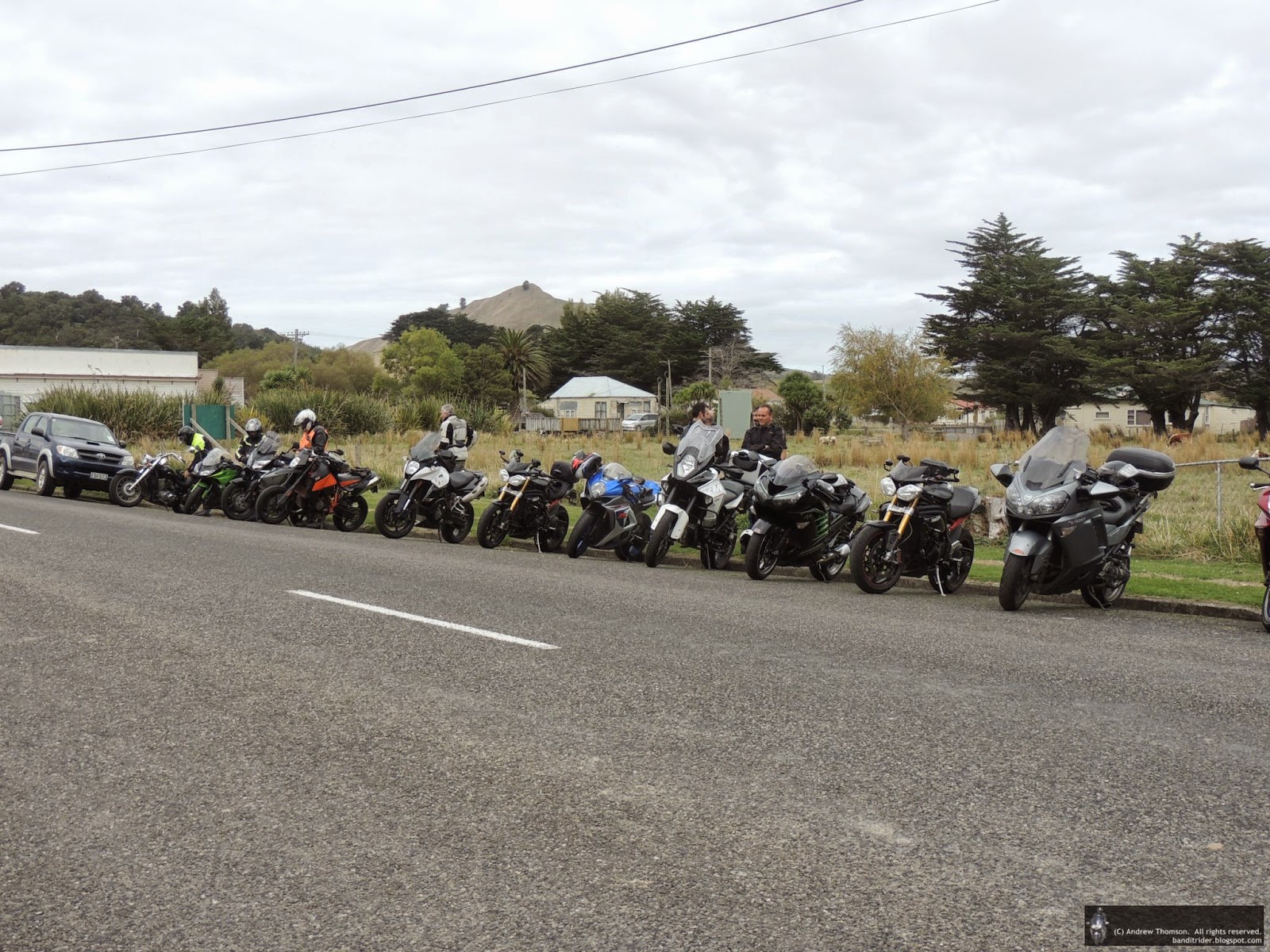 The next leg of the ride took us further South through Alfredton and onto Eketahuna where we stopped to fuel up and farewell some of the Wellington contingent.  This only left a fairly spirited ride through Mangamire and over the track to finish the day off nicely.

The video below is just a few snippets of Route 52 - doesn't it look fun?


One great ride - where to next month?

No, I wasn't there tearing up the track on the Connie or V-Strom (although there was one Vee out there having a go) but I did pop in with Dad and my brother-in-law to check out the action.

Walking through the pits there was some fairly nice machinery to drool on: 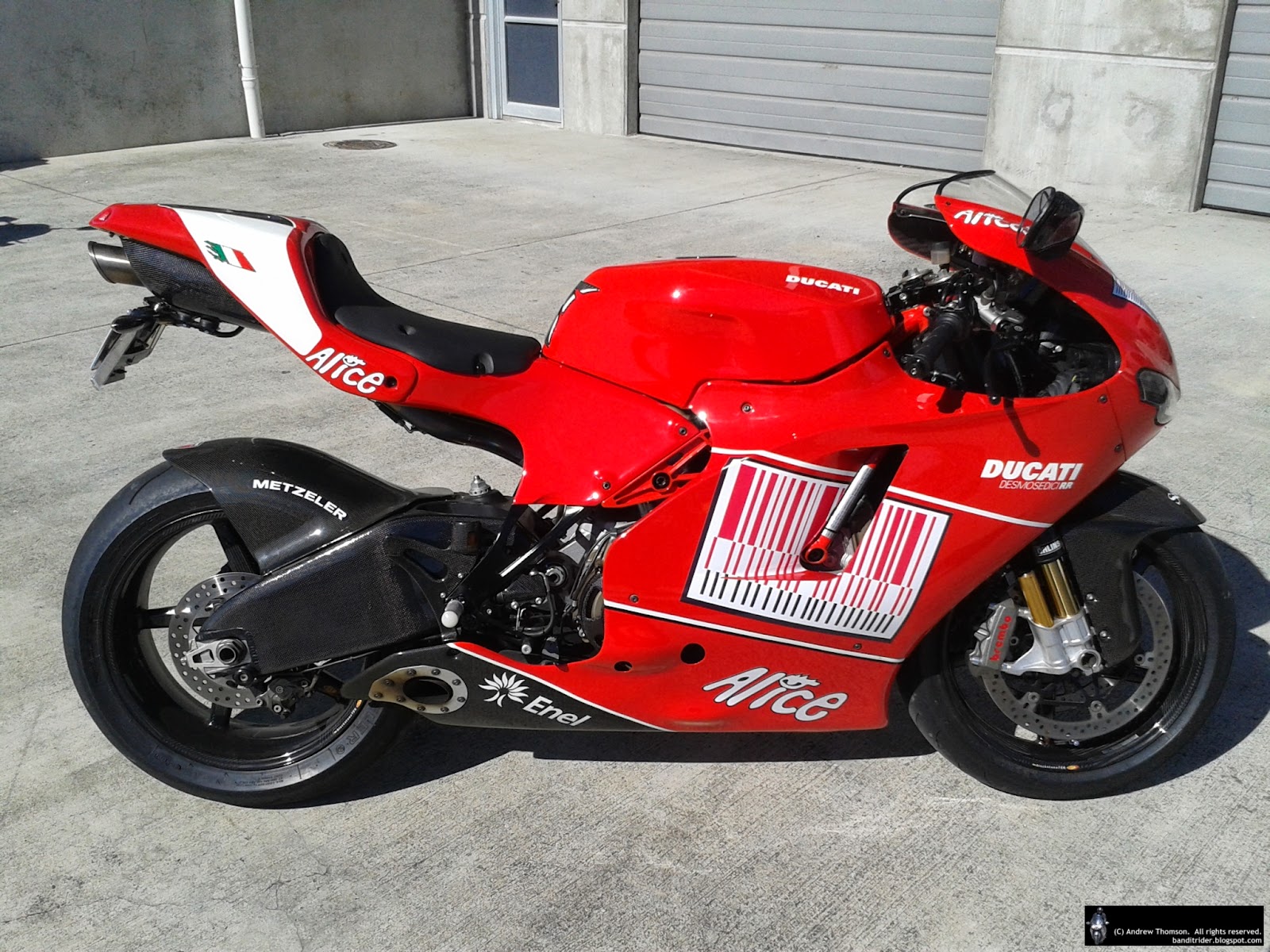 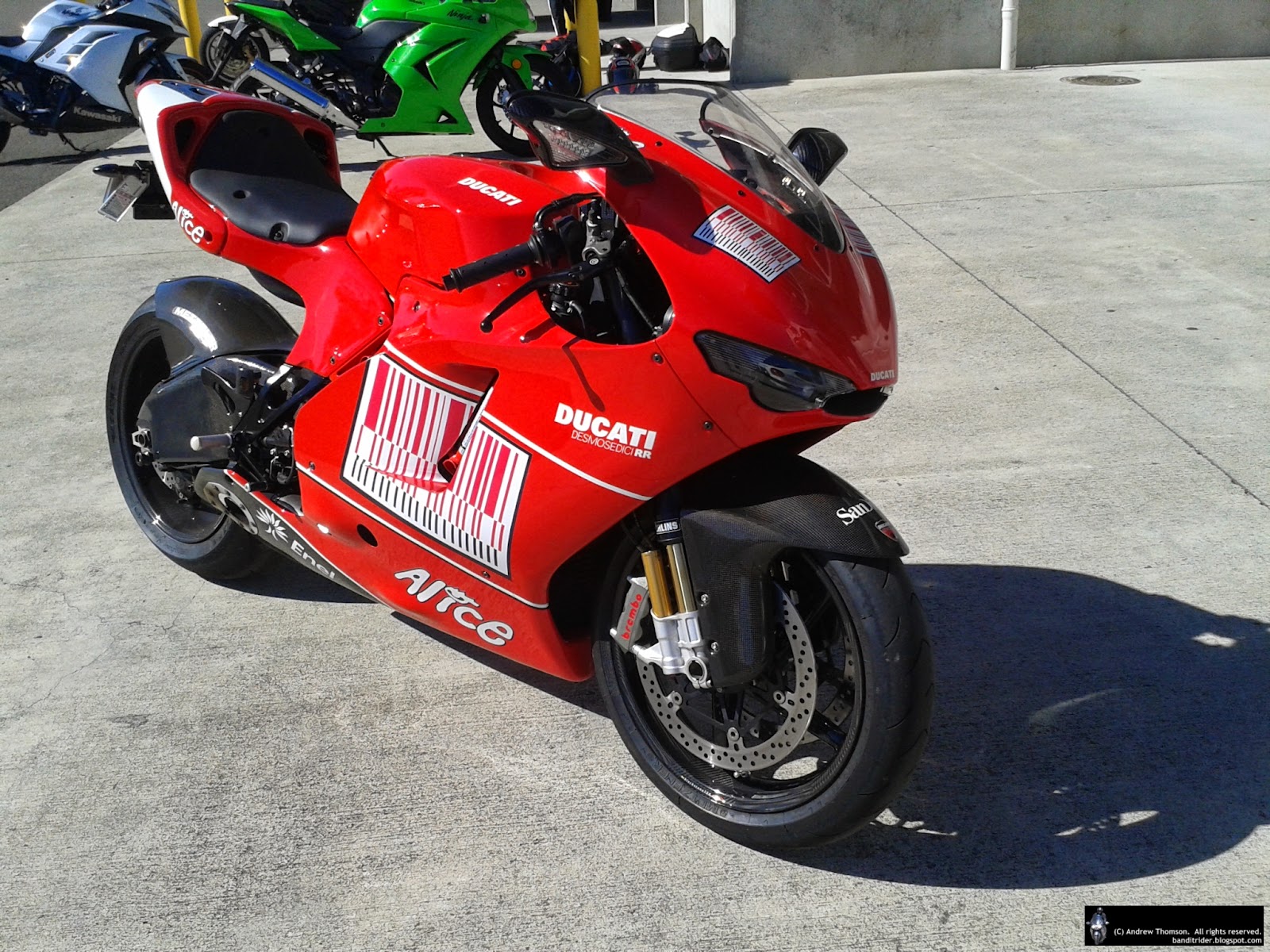 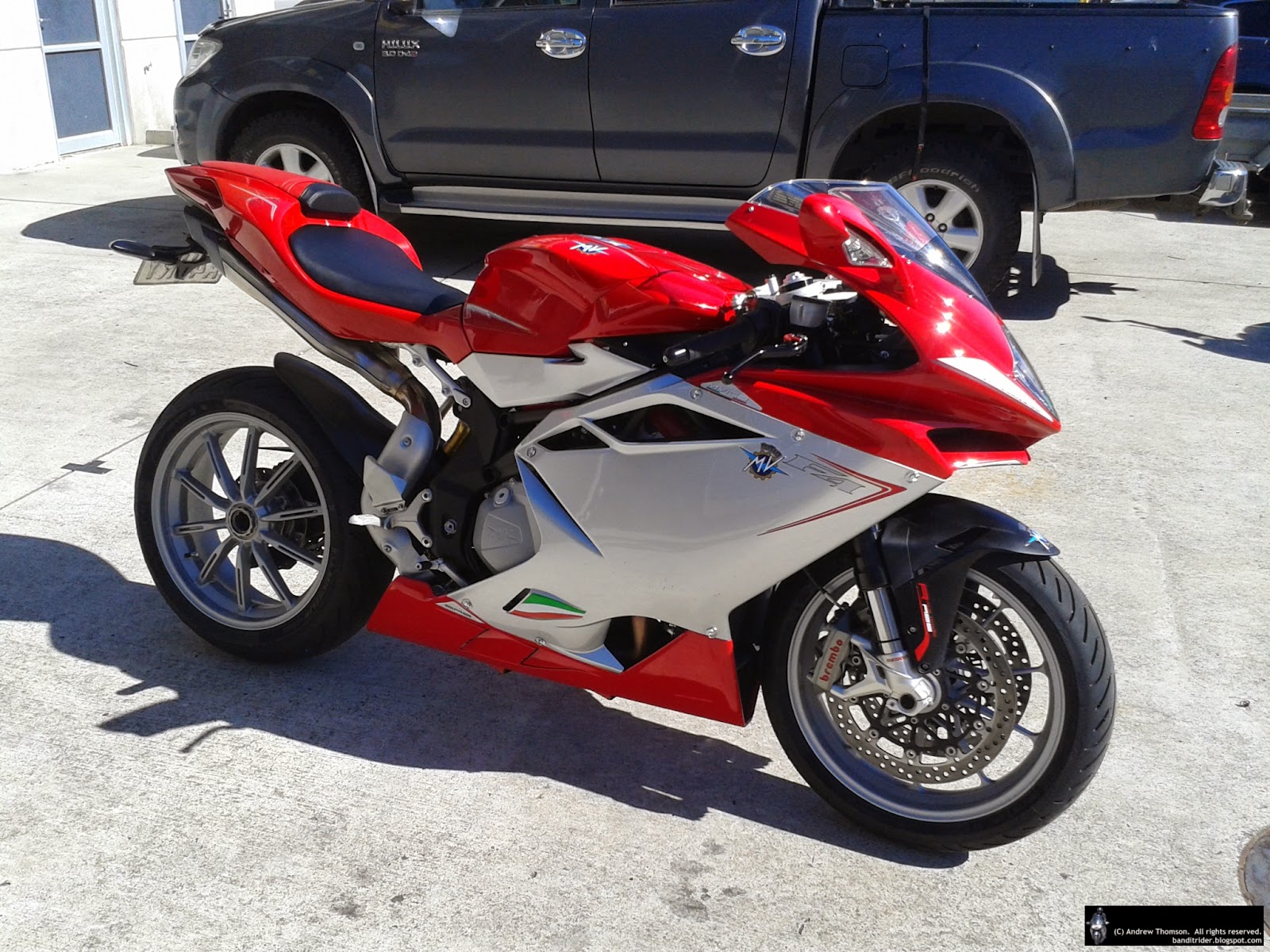 Watching the riding was also interesting as there was everything from 250cc learner bikes to big adventure bikes and out and out racing machines.

Here's a few of Supersonic in action: 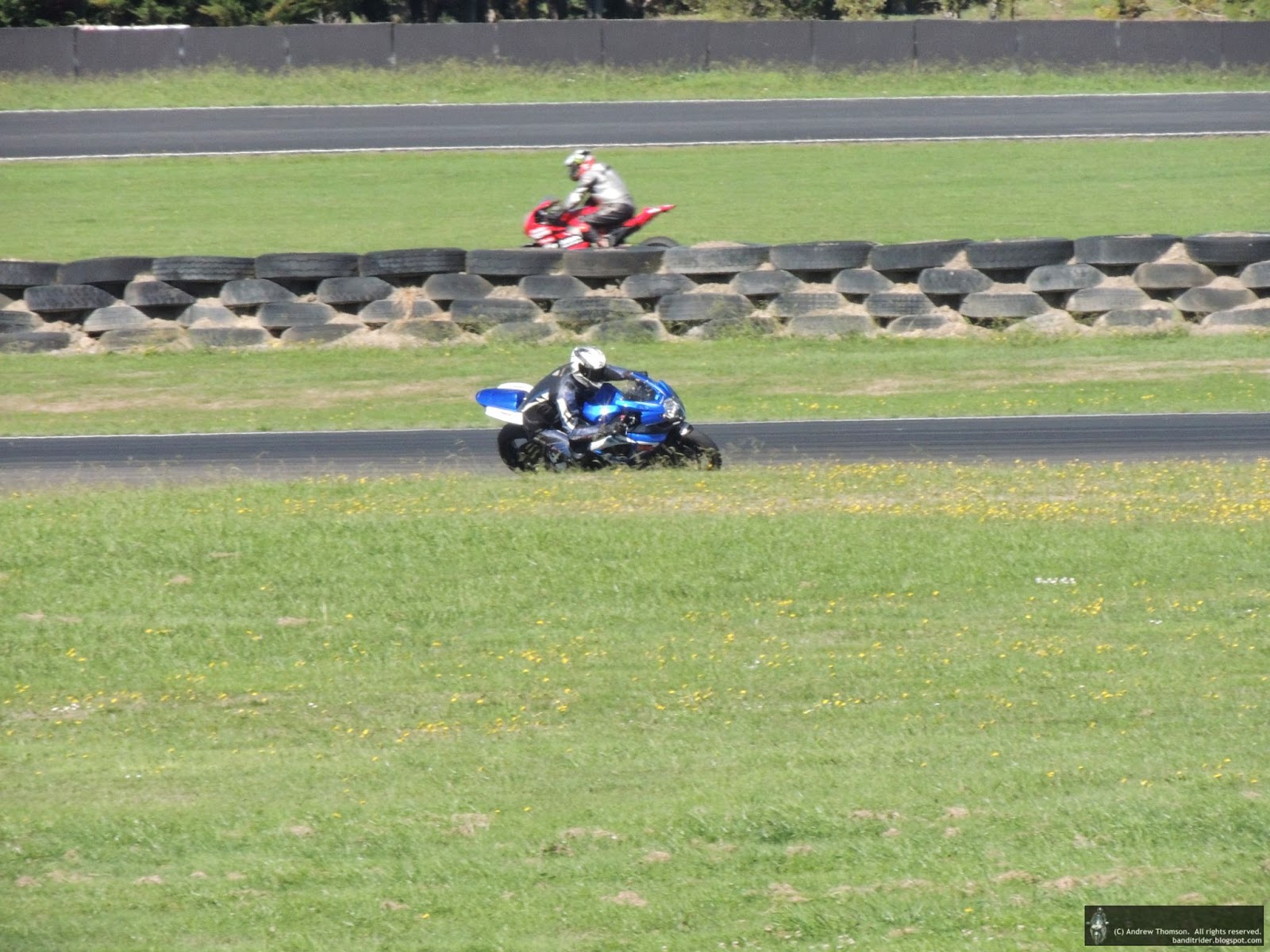 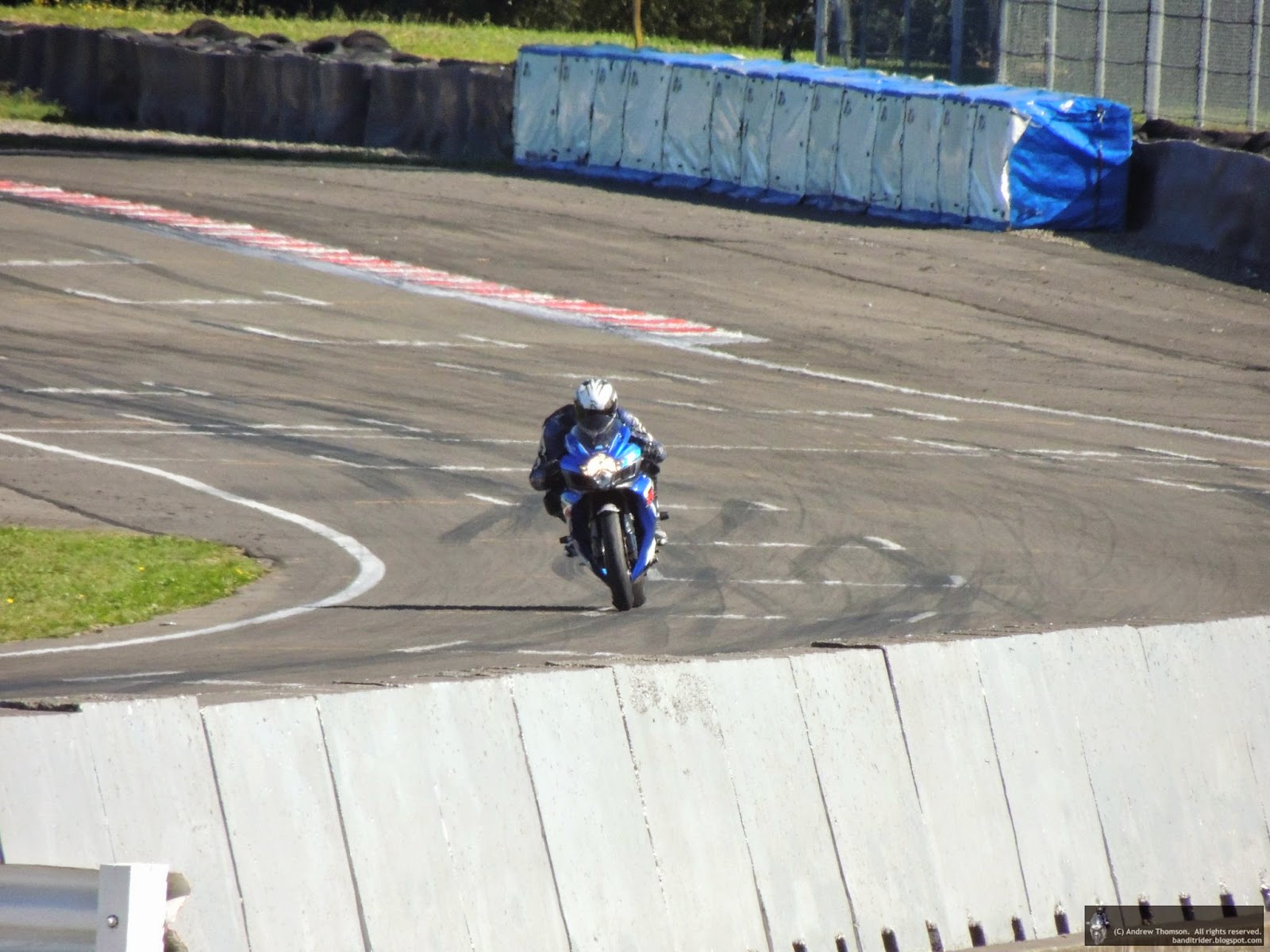 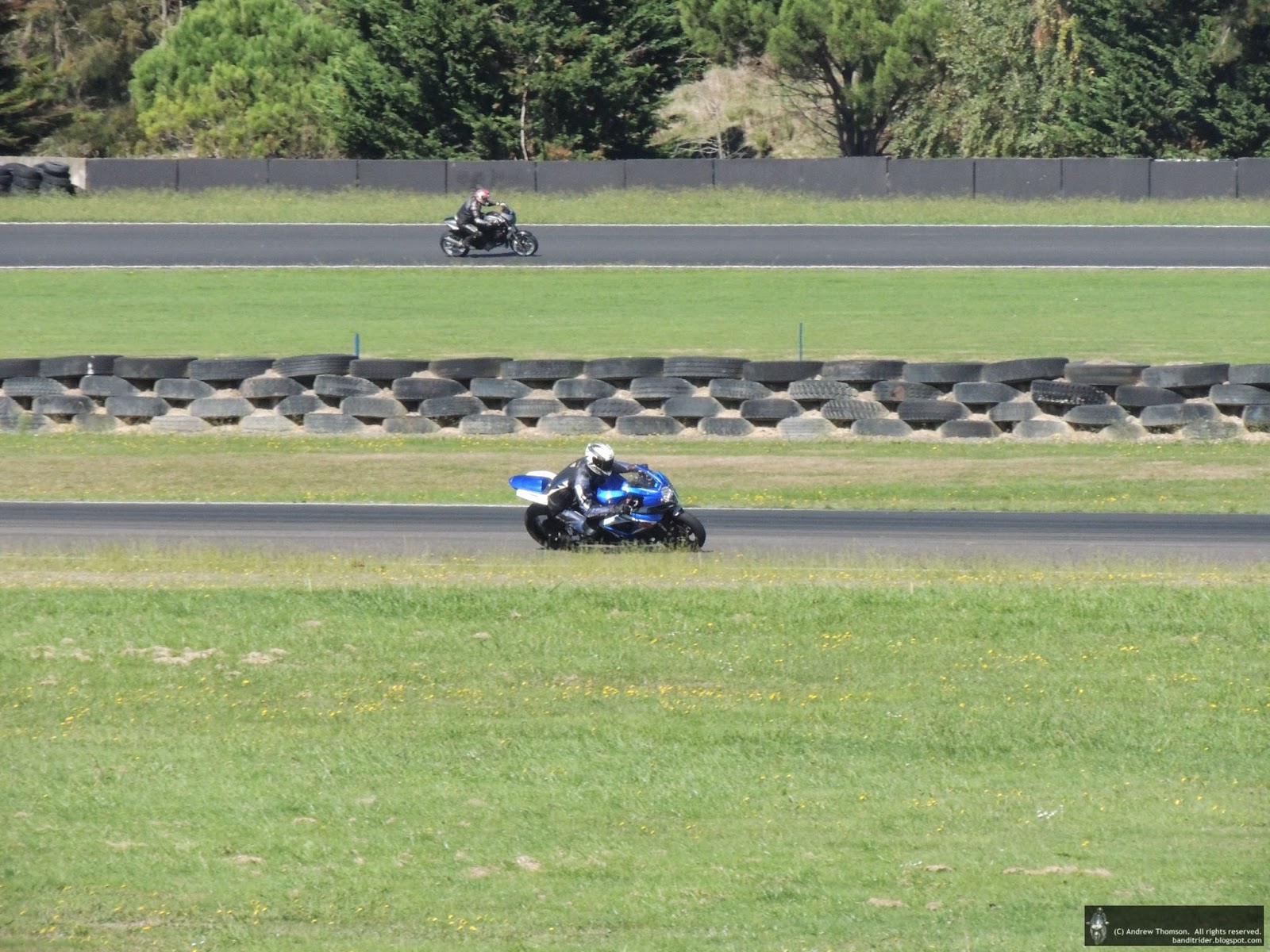 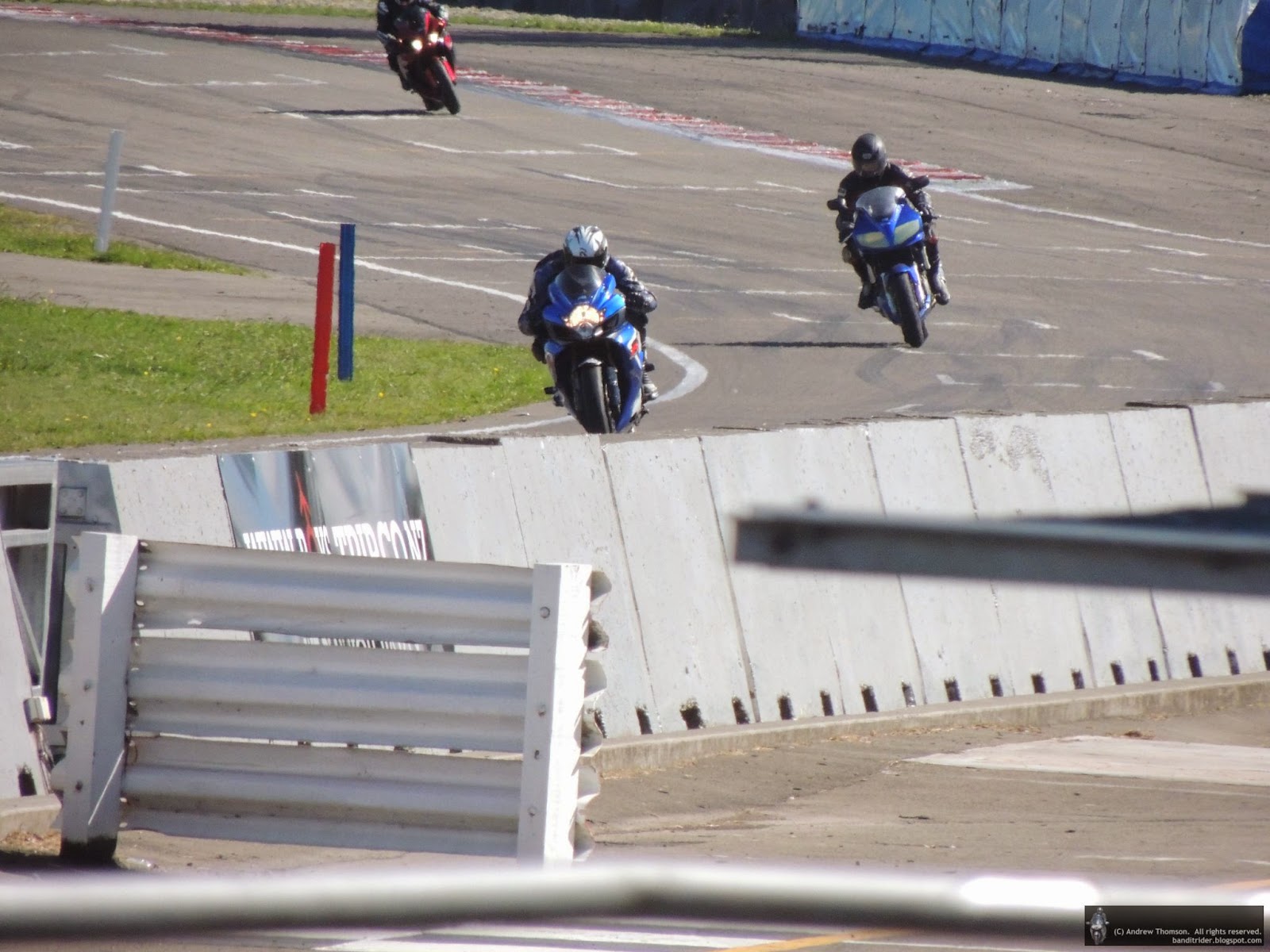 And a certain Yamaha dealer: 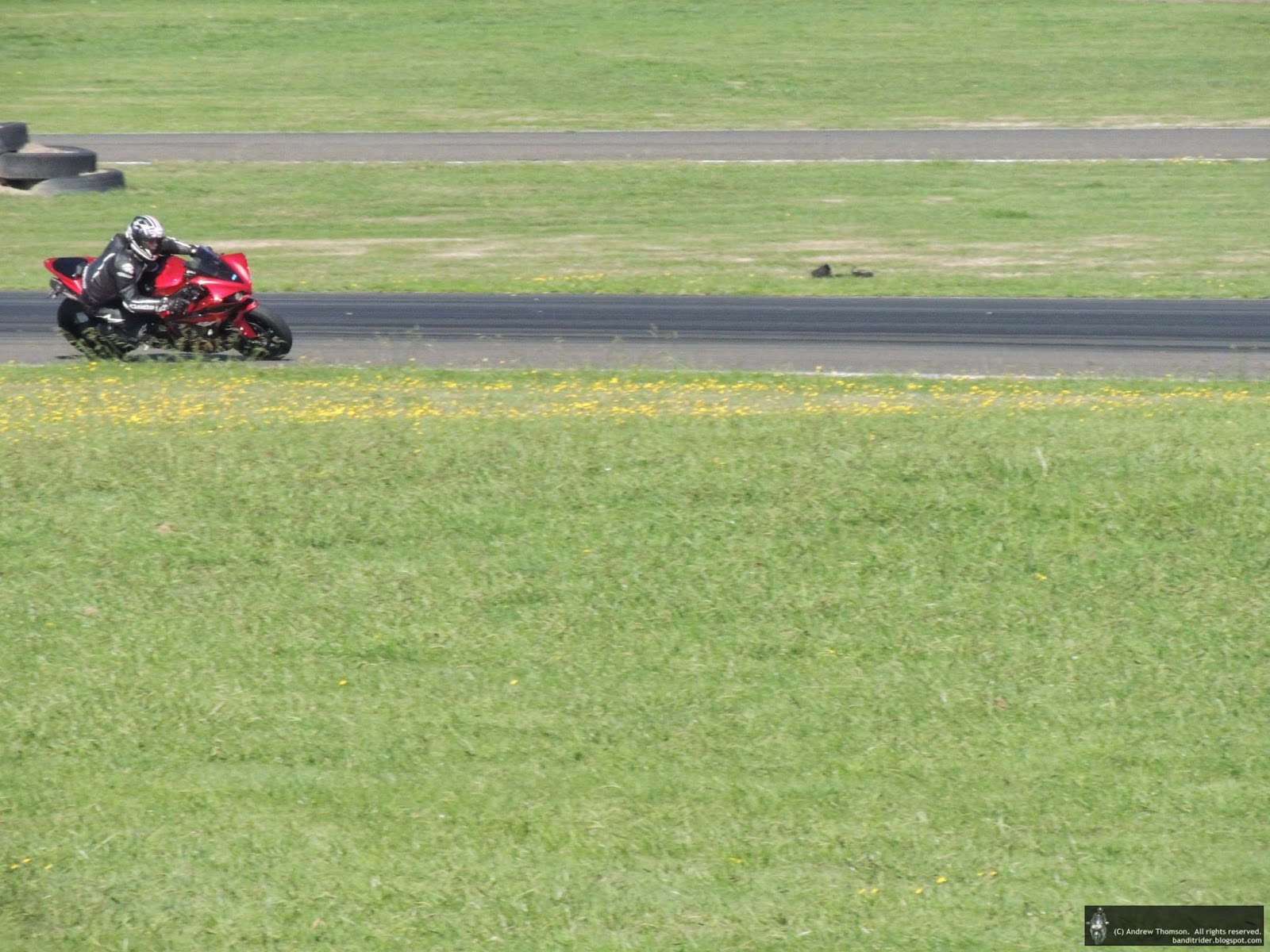 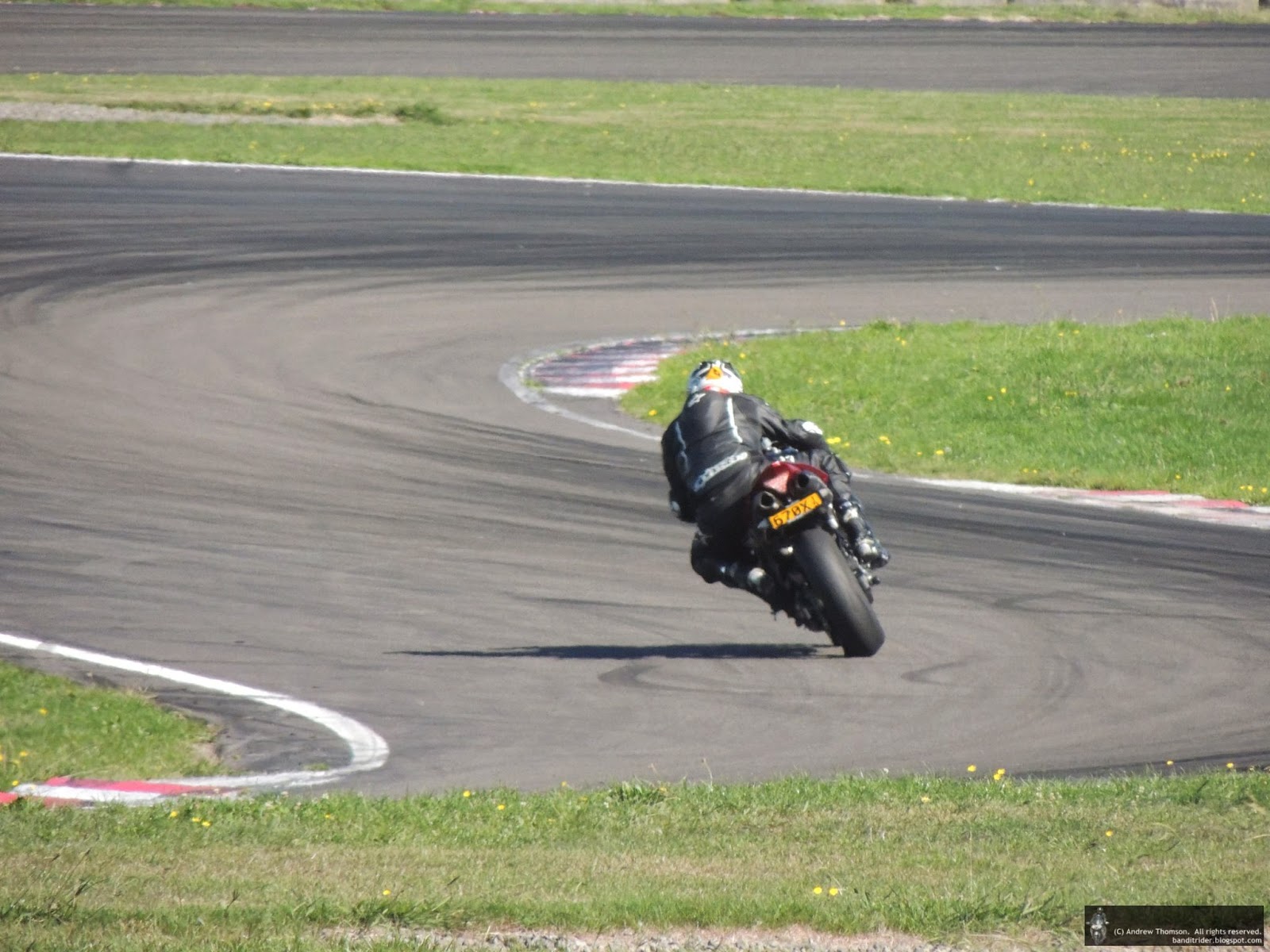 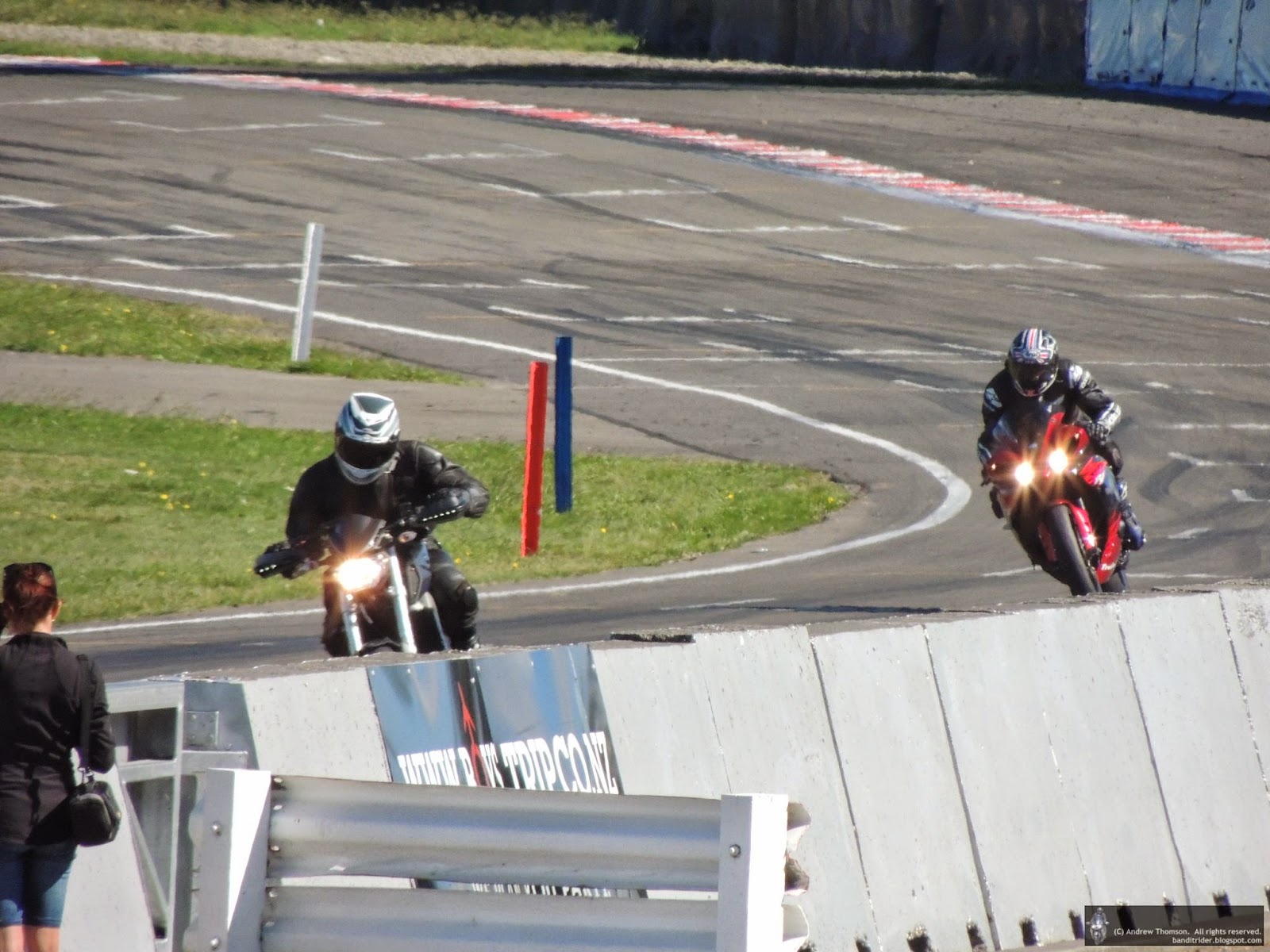 A good way to spend a few hours on a Saturday morning.