It seems that it's time for another Blog challenge.  Chillertek wants to see photo failures where the the ignorant camera operator inadvertently snaps a piccy of themselves or stuffs up in some other way.

Well, as a GoPro owner I have to say, "Too easy".  The GoPro is a really neat camera but with the display screen on the front it's pretty easy to snap pics of yourself - especially if you're wanting to check if the damn thing is running.  I need to by a remote for mine...

Yes, with the recent arrival of some better weather there has been a little action on the tag hunting front.  After a massive 195 days my old tag finally got nabbed.

Pegasus was the successful hunter and here's her new tag: 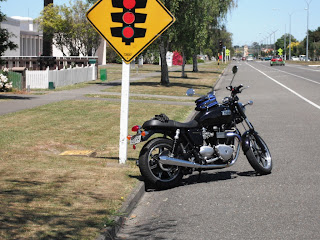 I knew where it was straight away so thought that a quick pootle after work was in order. 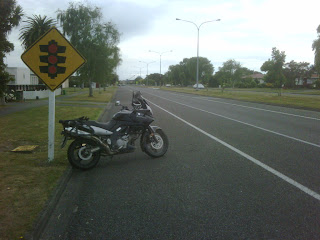 And then I turned around to head back to where I'd noticed something pretty cool for the next tag: 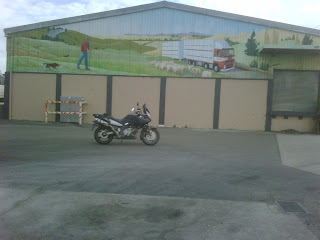 I then headed home pronto to do some uploading only to discover this on the tagorama thread:

But much worse than this I also found this: 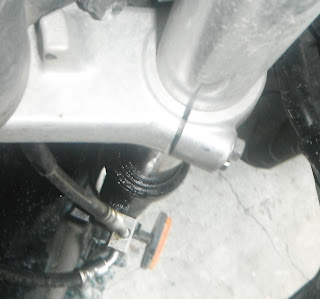 So no tag hunting on the DL for a little while!

But I bet even my favourite international readers know where the tag is currently... 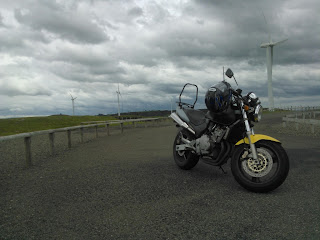 Yesterday was the 20th running of the Woodville Lions Coast to Coast and as I've been to over half of them I thought that I'd better make an appearance.

At around 9, Mark, Brian and I made our way out to the ride start at Himatangi.  Once there we signed on and got our badges and by the time we got back to the bikes we'd been joined by Meanie, Monie and Cowboyz.

The ride finally hit the road at around 10:15 and 3-400 bikes starting making their way to the East Coast.  We started with a short boring stint up SH1 to Sanson and then turned off to ride through Fielding and across to Ashhurst.  Riding along Ashhurst Road I managed to be quick enough to get the GoPro running to catch the Rescue Helicopter filming the long line of bikes.


In Ashhurst we pulled out of the line to fuel up.  This avoided the mad rush for gas at Woodville and meant we wouldn't need any more fuel for the rest of the day.  When we hit Woodville we ran into the tail end of the run as they were making their way into town for the lunch stop. 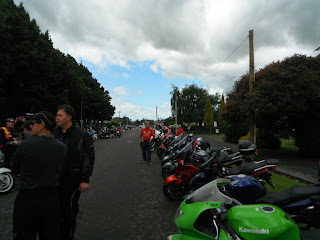 After grabbing our lunch we caught up with Pete and Dan who had decided to join us for the run over to the Coast.  As this was Dan's first ride on these slightly dodgy roads we decided to leave well before the bunch and take our time.  Here's me trying to catch the mighty Keeway in the Makuri Gorge.


I just manage to catch him and then lead the guys up over the hill:


Eventually we hit Route 52 in Pongaroa and after a short squirt we turned off onto River Road to take us into Akitio and the ride end.


As we were amongst the first to the beach we had plenty of time for a drink and something to eat as we watched the rest of the bikes roll in.  Once again we didn't want to be riding in the big group so left early before the prize giving and headed for Danniverke.

Along the way we had a bit of drizzle and some wet, slippery roads to deal with but by the time we were on the Weber road we were in the dry once more.  Here three of us got away a little and after parking up in Danniverke were surprised to see the other two turn up riding each other's bikes.  I'm pretty sure Dan found the GSX-R1100 a little different to the Super Shadow...

Now all we had to do was get home and while Dan and Pete took the main road, Brian, Mark and I just had to take in a few more back roads and the Saddle to make the ride more interesting. 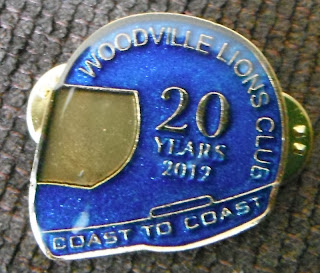 This morning I went out to the shed to get the DL out for the ride to work and made  a disappointing discovery.  The bike was difficult to wheel around so straight away I new that I'd picked up a puncture somewhere - perhaps some of those sharp rocks on the tracks up to the dams.

After I got home tonight I had a quick look at the tyre and besides a few nicks here and there I couldn't seem to find the cause of the puncture.  So I fired up the compressor and blew the tyre up to about 60 psi.  After turning the compressor and the radio off I could hear a pretty good hiss from the tyre... 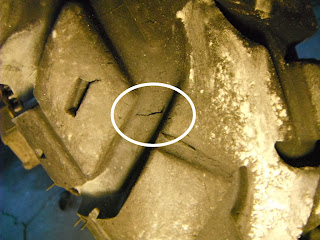 So five minutes later the shed looked like this: 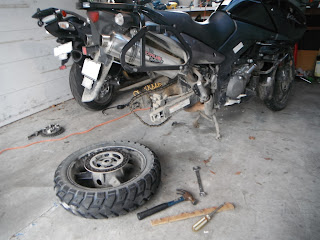 And I was then able to give the wheel a decent scrub before throwing it in the car for tomorrow's trip to the bike shop and repairs.

Incidentally, the tyre now has just under 4,000km of hard riding on it so it looks like it's lasting as advertised - fingers crossed!
Posted by Andrew Thomson at 6:51 pm 8 comments:

Just as a matter of interest I had a wee look at the GPS track and checked out the elevations we climbed to when visiting the dams.  We didn't really get up that high - maybe that fog made it look like we were mountain climbing. 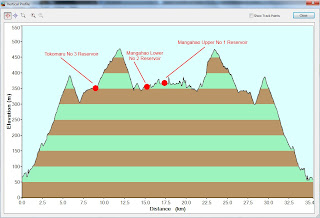 With a bit of mucking around I managed to work out roughly where the dams are and as you can see the picture shows both our trip in and out giving a rough mirror image.

Oh, and lookee what I found on NZ Topo Maps:


Incidentally the summit of Whariti is at 920m and we managed to climb to 217m according to the GPS - I wonder how windy it was at the top!

After yesterday's great weather it was a bit of a bummer to awake to blustery and wet conditions.  But there was a ride on...

Once I'd loaded the bike I saddled up and rode out to Ashhurst where I was soon joined by four other brave souls (including two Colins).  Our first stint took us through the gorge and then to the climb up to Whariti - unfortunately we never made it!

As I mentioned before it was fairly windy and further we climbed the hill the worse it got.  I was in the lead and just before a tight right hander I got absolutely hammered by the wind.  Rather than go on I stopped.  Colin pulled up behind me and he too thought it was too bad to go on.  The video below shows our ride up and then the efforts in turning big Adv bikes around on a steep hill in hurricane (well, I'm pretty sure of that) force winds...


This kinda sucked because this is the second time I've tried to go up Whariti on the DL and had to turn back because of the conditions.  I have however ridden a road bike up there - my old GSX750F.

Back down the hill the team (minus one who had had enough of the weather) rode through Balance and over the track and then made our way down to Shannon.  Here we pulled off the main road and headed for the hills.

I was really looking forward to this as I'd heard a bit about the "dams in behind Shannon".  The dams are reservoirs for the small Hydro power station that you can see at the start of this video.


The roads we were riding on were really in good nick with plenty of grip except for just the odd slippery clay bit.  A bit of a bummer about all the fog.

After checking out the last dam it was time to turn around and retrace our steps back to Shannon.  This was a blast although I had the dreaded visor/glasses fogging issues again and even had to stop once to give my glasses a quick wipe.

Once back in Shannon it was time for a quick bite before saying goodbye to the guys and then battling the wind with Africa-Twin Colin back to Palmy.

Not the best conditions but still a great little ride.  Definitely heading back to check out those dams again in better weather - should be some great views in clear conditions!

Yesterday was the annual Central Districts Toy Run and this year Brian, Linda, Chris and I were able to bring along a newbie with us - Daniel on his mighty Keeway Super Shadow!

Dan's been riding for about two years and this was his first group ride.  We started off with a quiet cruise over to Feilding where we had lunch while waiting for the rest of the riders to turn up. 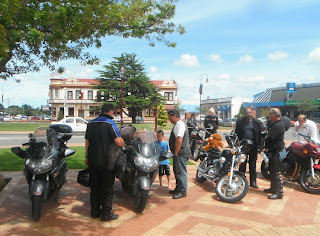 The ride itself was just a roundabout ride back to Palmy - instead of the usual 20 km it was more like 70km.  Plenty of time to catch the mighty Keeway in action.


The ride ended at a local watering hole where we handed over our toys and were able to purchase a badge and a sausage.

So Dan's got his first badge and is keen for the Coast to Coast next weekend...
Posted by Andrew Thomson at 8:26 pm 1 comment: