It's a long weekend here but so far it's actually been a little grey and cool.  After a day of pottering around home on Saturday I decided that I at least needed a short blast to sort out some cobwebs.  Mighty Mouse needed it's cobwebs sorting too...

All up I only did around 70km but I did manage to sneak in some gravel on Watershed and Midland roads.  It'd been awhile since I'd ridden the WR on gravel and it took me a while to settle into it.  The little bike moves around a lot more than the Tenere and I'm not sure if knobblies were the best bet for the very hard and "gravel-less" roads.

The rest of the ride was on seal and after a quick stop at my olds (nobody home) I fanged it back home.

Here's a bit of Midland Road - watch for bunnies at around 4:30.

Posted by Andrew Thomson at 3:51 pm No comments:

On Saturday morning I received an important phone call.  It went something like: "you need to go for a ride tomorrow to keep your hand in, can't go rusty etc, etc."

"Well, sounds like a good idea then.  Better listen to reason."

So Sunday morning rolls around and while just finishing my first coffee of the day, I hear a flat twin coming up the road and the vicious guard dog goes out to savage her Uncle Colin...

While Colin was tending to his wounds (actually stirring the dog up even more) and drinking coffee, I got the Connie out of the shed and got myself organised.

Our first little squirt was up over the track and onto Pahiatua.  For once the road was reasonably dry and it was a nice little warm up before a quick stop for gas and someones brekkie.  Ok, I might have had a sausage roll too..

Next up was the cruise through to Pongaroa.  Things started off pretty dry but the odd damp bit started showing up as we neared the Makuri Gorge.  Then the rid up the hill and over the other side involved plenty of slippery bits and even some spits of rain!


Once we dropped back down into Pongaroa things dried up a bit for the ride through to Wimbledon.  This bit of the road has taken a pounding from storms and traffic over the years and I'm pretty sure it gets worse every time I ride it.  There's also been a lot of logging going on and the trucks have been giving it even more of a hammering.  Plenty of humps, bumps and slumps to navigate your way past.

From Wimbledon, the road improves a lot and the last little climb before Porangahau has been tidied up a lot - it's starting to resemble a racetrack...

In Wimbledon we stopped for a leg stretch and the only photo of the day...

Leaving Porangahau, we kept near the coast before making our way back to Waipuk via Blackhead Road and Porangahau Road.  Even Blackhead Road is getting a little pummelled - still nowhere near as bad as that section of 52 I mentioned above.


From Waipuk it was just a hop, skip and a jump to Waipawa before cruising through to Patangata where we stopped for a natter before taking the delicious Middle Road up further into the Bay.

At Bridge Pa we crossed over to SH50 before stopping in Taradale for lunch and fuel.

After lunch it was time to see check out the Napier-Taihape road and see if it was still a good ride.  Spoiler: it's pretty damn fantastic!

We set a pretty good pace up over the hills and down into the valleys but funnily enough we both mentioned thinking that we weren't really on top form when we stopped in Taihape.  I guess I felt a little tired for some reason and was having a little trouble transitioning from the slower, tight sections to the faster more open stuff.  It was still a mighty fine pootle though.

Here's one of the slow bits in the middle.


In Taihape we both had a coffee before the quiet cruise home down SH1 and the not so quiet squirt over Vinegar Hill.  Home by 4:30 after a nice little 530 or so kms.  Nice to be riding without liners too...

Finally finished my write-up.  It's here on my website. 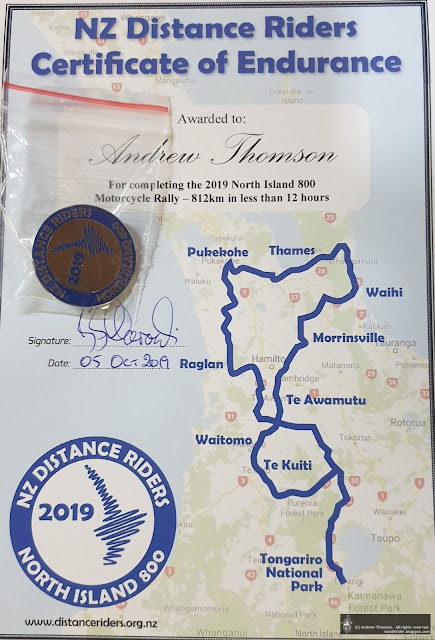