Yeah, it's been a while but Owl kicked things off by finally grabbing an old tag and posting up a real easy one yesterday.

So, with it still up for grabs this afternoon I headed out to see if I could nab it.  It was a pretty warm day but the skies were a wee bit on the threatening side so I didn't muck around.  In places the roads were a bit wet - particularly through Waituna West and on Vinegar Hill but it was good to be out on the Vee again.

Approaching Stormy Point there was a car parked right where I needed to be for my photo so I carried on down the hill to explore a road I hadn't ridden before.  Rangitikei Valley Road goes to gravel fairly quickly and eventually ends at a farm gate so it's strictly a there and back ride.  The gravel was in good nick though!


Returning back to Rewa I turning back up the hill to Stormy Point and wouldn't you know it there was a car in my way again!  Nevermind, I got my tag.

Next on the agenda was to find a replacement tag.  I've been past this building a few times so today I had an excuse to stop. 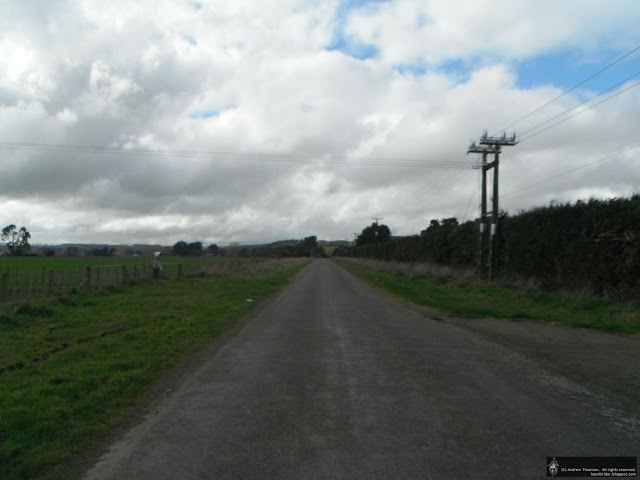 Tag hunting complete I shot home pretty quickly just on the off chance that someone else was out there hunting down Owl's tag.  No probs, I got it and now we wait...
Posted by Andrew Thomson at 7:49 pm 10 comments:

After eight years and 126,500km the low battery warning on the Connie's Tyre pressure sensors was becoming a bit more insistent (although still clearing once things warmed up a bit) and with a pair of shredded PR3's needing to come off it seemed like a good idea to do the batteries.

Over the last couple of weeks I trolled the Concours forum, watched a few YouTube videos and consulted with Dad about the job.  Tyres were then ordered and I picked up a couple of batteries and some other bits in pieces.

Then last night I started to get organised by removing the front mudguard, rear hugger and muffler to get a head start on the job.  This morning while waiting for Dad to arrive I removed the front wheel and got setup to remove the tyre. 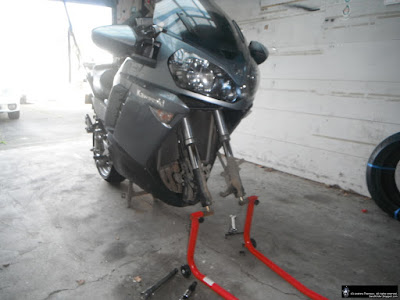 With help soon on hand we got the front tyre off and pulled the sensor off the rim.  Dad then popped it open and we started working out how to fit the new battery. 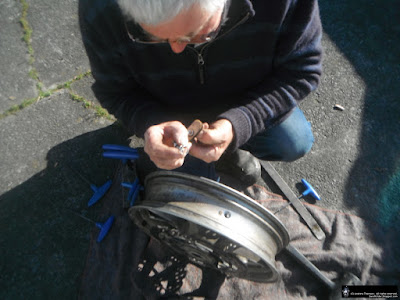 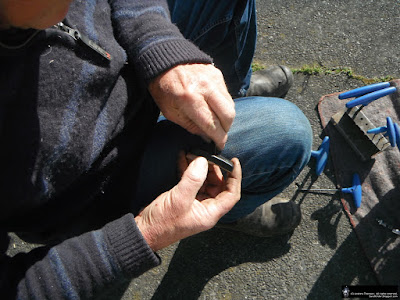 The original battery has tabs fitted to it and these are soldered to the circuit board.  We spent quite a bit of time fiddling around with a few options while doing the front one but eventually had the battery in and tested.  The next job was to fit the new rubber and test the sensor.

I rode up the rode a few hundred metres (no muffler, front guard and only 12psi in the rear tyre - gulp) and the sensor roared into life.  The rear sensor was reporting a low battery...

Next up was to remove the rear wheel and repeat the job on it's sensor.  I'd never removed the rear wheel before but now after the job I reckon that it's an easier job than the front. 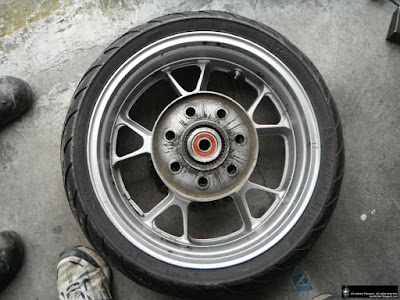 This time around Dad was a lot quicker and had the new battery organised in about 15 minutes and made a really neat job of it too.  In another 8 years time it should be simple to just swap out the battery... 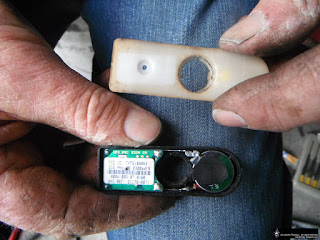 The new rear was soon on the bike and I was off to test the sensor again, the neighbours surely enjoying the sound of the Connie sans muffler and the crackling and popping when I buttoned off the gas.  And yep, we had two working sensors!

The main part of the job done, Dad departed and I carried on bolting back on the rest of the bits and pieces.  Now all I have to do is get a WOF and I'm all set for next weekend's Black Top ride. 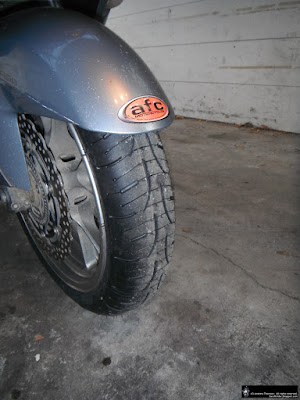 So not much has been happening on the riding front: the Vee has had a few trips to work and the Connie has finally had a bath.  Next on the list is to sort out new tyres and batteries for the TPS on the Connie followed by a WOF and then she'll be ready for more action...

In the meantime I was backing up some files to my external HDD and ran across some old video.  This was taken with a very crap (and cheap) camera that I played with for a while before finally going down the GoPro road.  It's of the old Firestorm (just one of the bikes I've owned but should never have sold) taking a wee pootle over the Pahiatua Track.  The video is of shocking quality but I do like that it captured the lovely noise that the VTR pumped out - even if for some reason it doesn't sound as good on Youtube as the source video does...

Skip to about the 3min mark for the best sound.


Yeah, I told ya the video quality was crap...
Posted by Andrew Thomson at 8:20 pm 5 comments:

Yesterday was our monthly BRR Black Top ride and as you can tell from the title I kept it fairly local with us not ever being more than about an hour away from Palmy.  And yet we still managed to cover around 340-350km.


About nine of us met up in town and headed off under uncertain looking skies for the first squirt up over the track.  The road was a bit damp and there was a bit of fog hanging around but the track wasn't in pretty good condition - you could still see where the tree and the big slip had blocked the road a month or so ago.

The fog was gone as we dropped down the other side of the hill and the reason for this was probably a chilly and frisky breeze that was blowing us around a little.  A quick squirt through Mangamire was followed by a short stretch of SH2 before we crossed over onto Mangaone Valley Road.  The weather was definitely a bit better over this side of the ranges. 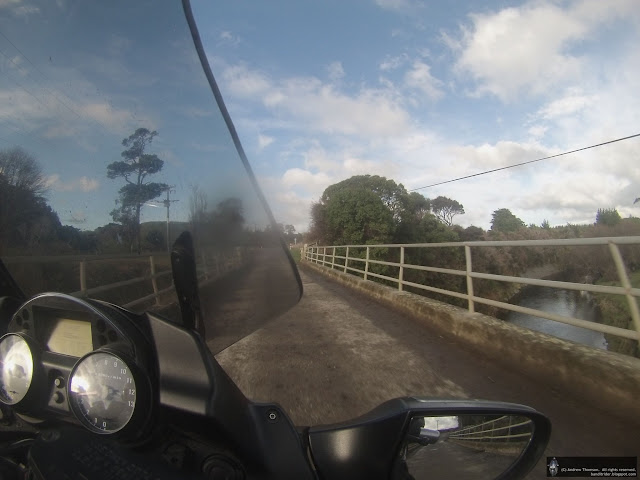 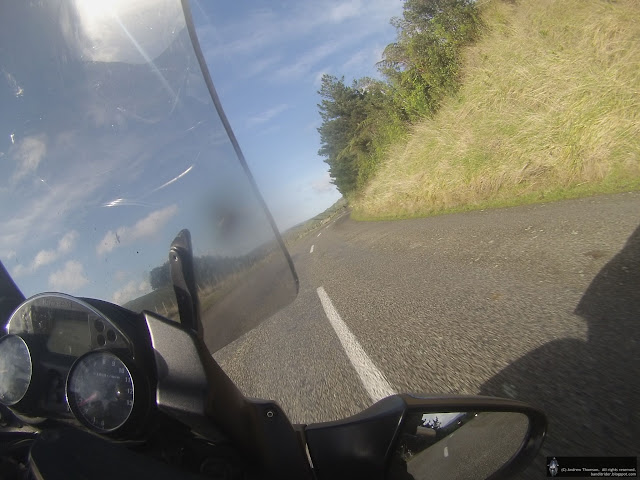 Rather than popping out onto SH2 again at Pahiatua, we crossed over to Pahiatua-Pongaroa Road and took this for about 150m before turning off to parallel the main road in behind Mangatainoka and through to Hopelands.  It was through here that we confirmed that we were indeed travelling the Back Roads as we were stopped by stock movements twice and were riding through plenty of "sign". 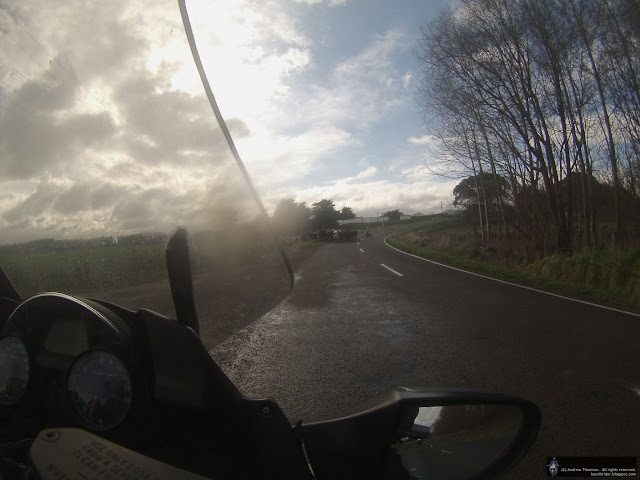 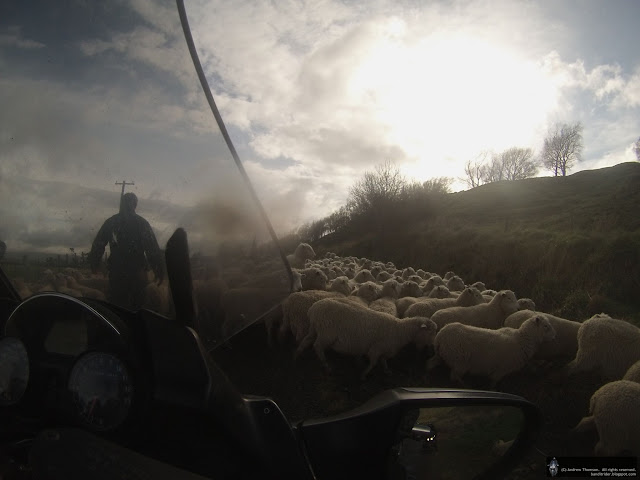 Next up we crossed SH2 again and made our way up over the Saddle, dropping down into Ashhurst where we stopped briefly for fuel. 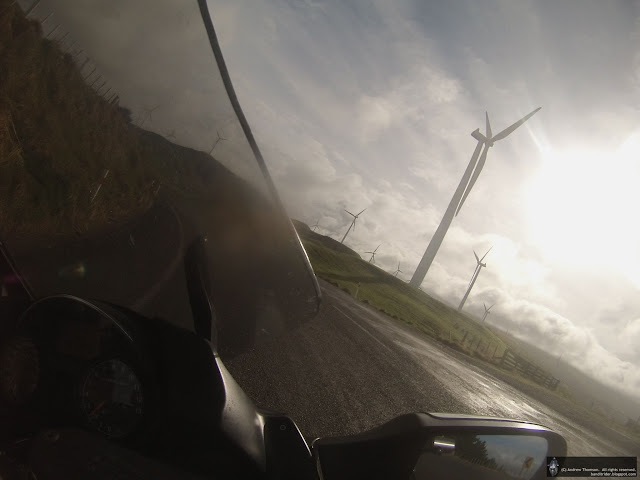 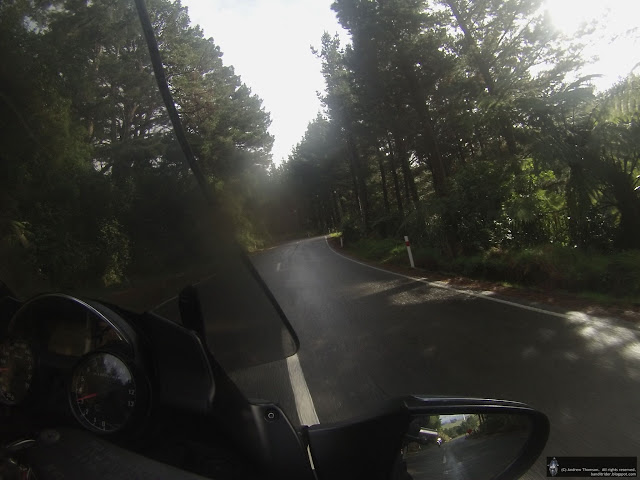 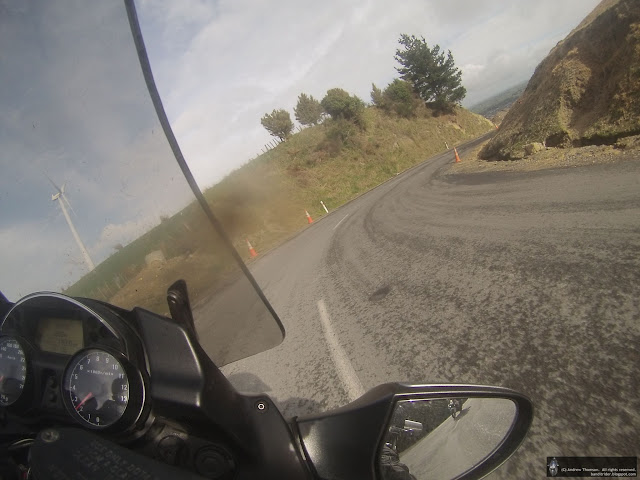 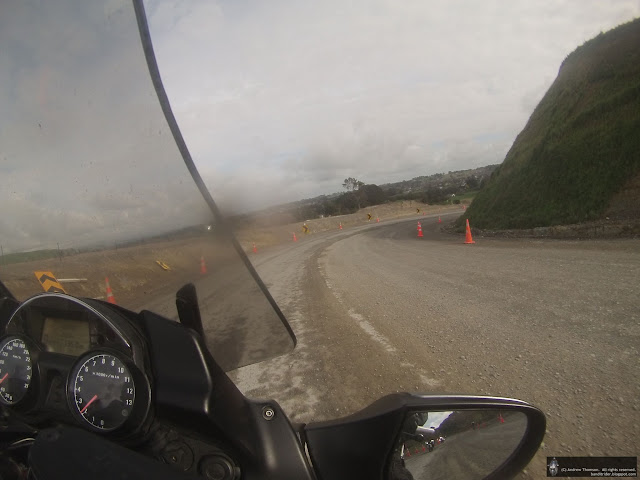 From Ashhurt we took a convoluted route to our lunch stop at the Waterford by popping out to Colyton and then fanging across Valley Road - slippery going in places.

After lunch we carried on around the loop towards Apiti.  The roads were very similar to the ones we'd ridden in the morning - damp and covered in winter wreckage of mud, stones and small branches.  Nearing Apiti I noticed a familiar warning on my gauge - "Low Rear Tyre Pressure".  Yep, my poor tortured PR3 had picked up a sharp stone or something and was on it's way down.  A wee pause to fix it was on order. 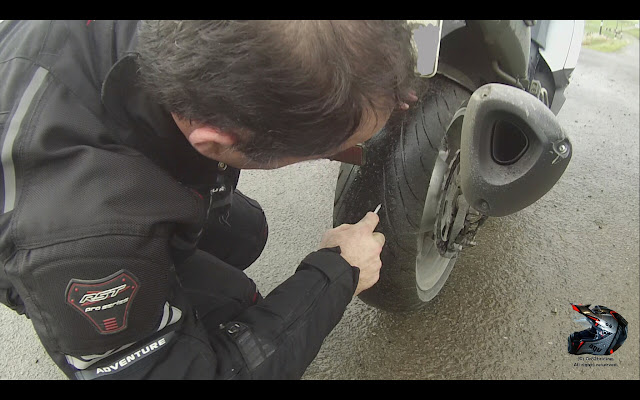 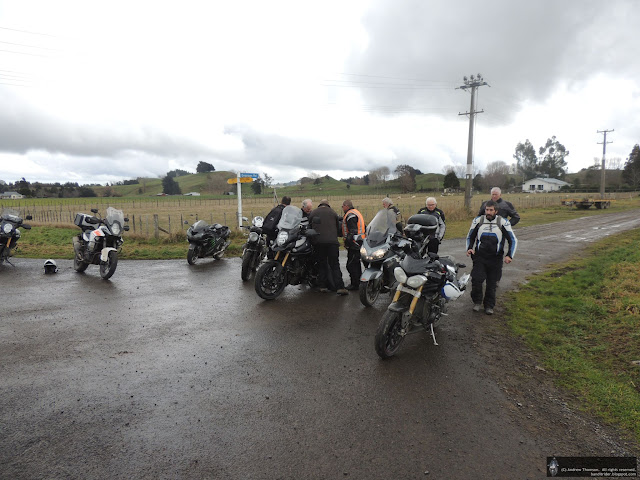 Tyre fixed and we were off again.  Here we left the "loop" and carried on towards Rangiwahia on Main South Road - this being my first trip on it since they finished sealing it.  A nice picturesque little ride.


Once again we avoided another big township (Rangiwahia) by turning right at the end of Te Parapara Road and making for Mangaweka.  As expected the road was fairly messy as we dropped down to the bridge.


At the SH1 turn-off we lost Neil and a few others (a better place to be?) and cruised down towards Ohingaiti.  Oh well, time to hit the back roads again, keep an eye out for the turkeys...


If you watched that video 'til the end you'll notice that I had another little problem... 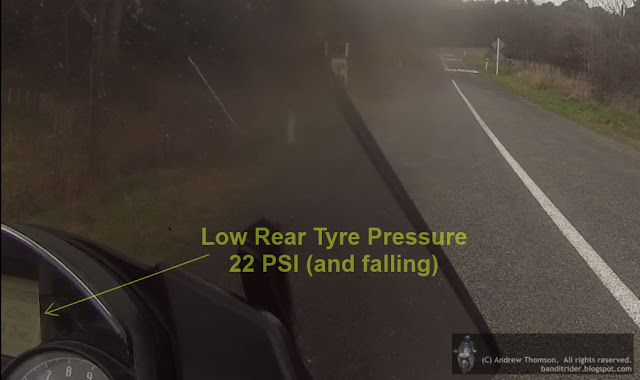 I know it's good practice at fixing punctures but this was getting a little annoying.  Nevermind, I reckon we were on the road again in about 10 minutes and the rest of the ride through to Kimbolton was uneventful.

We stopped in the hope of getting a coffee in Kimbolton but alas, the cafe was shut so we just said our goodbyes and made for home.  I was only just able to keep up with Colin as he pedalled his Wee furiously into Fielding - what a demon!

Home just after three, I parked a filthy Kwaka in the shed and went inside to start planning next month's ride...

Yes, today was our monthly Black Top Ride and yes, we found some back roads.  And had to share the road with quite a few mobile obstacles... 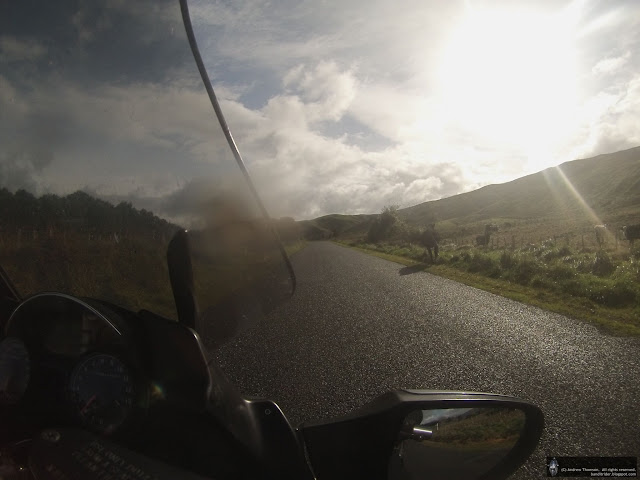 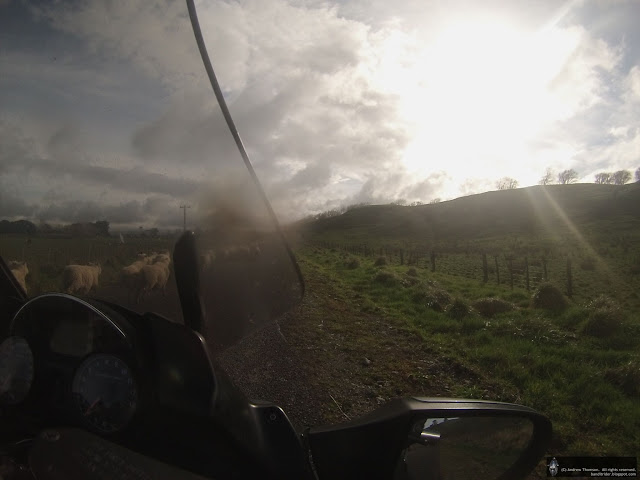 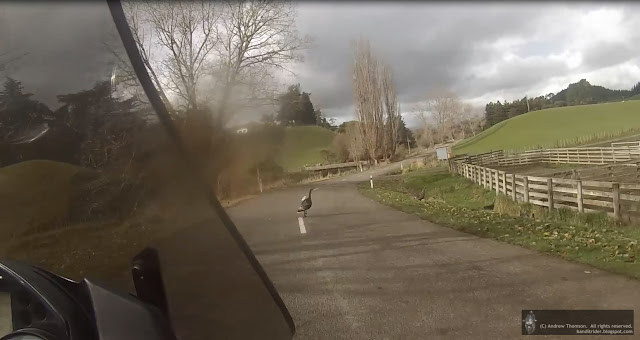