Yesterday was the running of this year's Coast to Coast ride which raises funds for the local rescue helicopter and checking my badges it looked like it was going to be number 15 to me.  Leading up to the ride the usual suspects had been in contact and organising when and where we were going to meet etc and now it was just up to the weather...

At 6:30 in the morning it was bucketing down...but I got up anyway and started getting organised for the day.  By the time the Vee and I were ready it hadn't rained in quite a while so I climbed aboard and went to round up Brian - yes, I was early...

Brian was soon ready to rock and we then headed off to meet the rest of the gang at a local servo.  Soon there were eight of us on seven bikes and we then hit the road to make our way out to the beach.  When we got there, we found that we were early among some of the first to arrive.  A few spits of rain fell on us which encouraged us to go into the hall, sign up and get our badges. 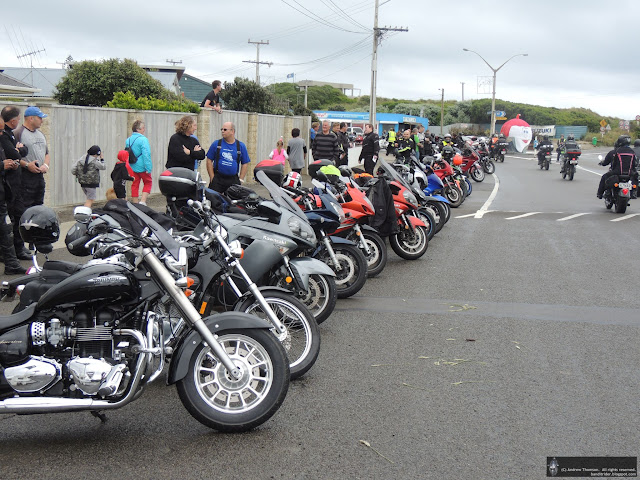 While we were waiting the chopper turned up and I got this shocking picture of it (a very rushed shot). 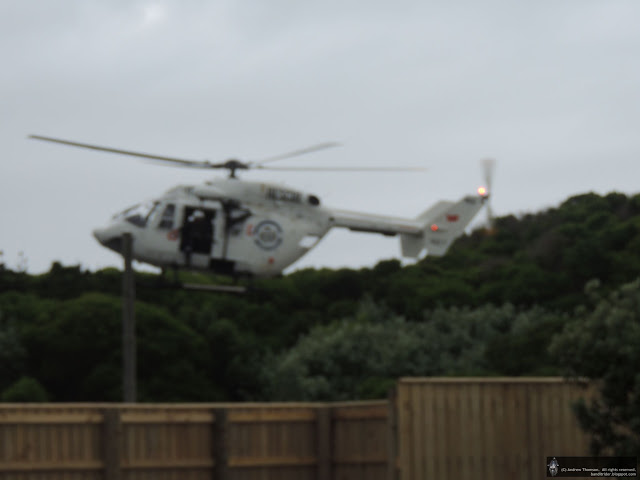 Eventually it was time for the ride briefing and then about 250 of us were off on our way to Foxton, crawling along behind a police escort.  From Foxton it was another slow trip across to Shannon where Mark and I stuck to our usual plan of quickly topping up the bikes with fuel to avoid the chaos at Woodville.

The ride then took us up to Aokautere and then up over the track.  On the downhill leg I caught up to a couple of old classic bikes and was impressed with how one in particular was being punted through the corners - the rider keeping his corner speed up and taking a pretty nice line through the twists and turns.  A short sprint through Ballance (behind a nice 6 cylinder beemer) soon had us formed up for the slow crawl into Woodville as part of their Xmas Parade.  Then it was time for our BBQ lunch. 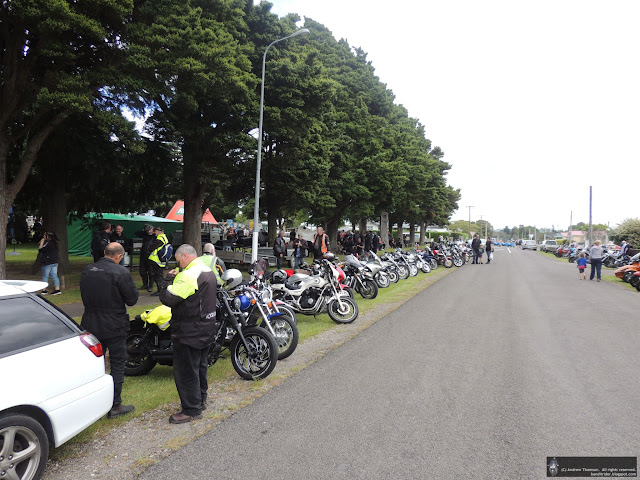 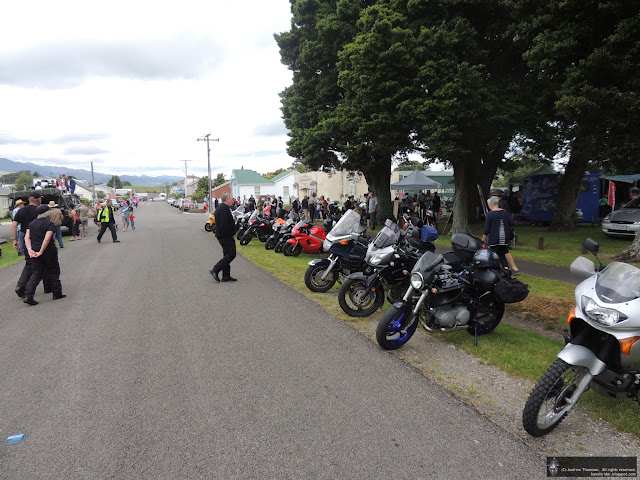 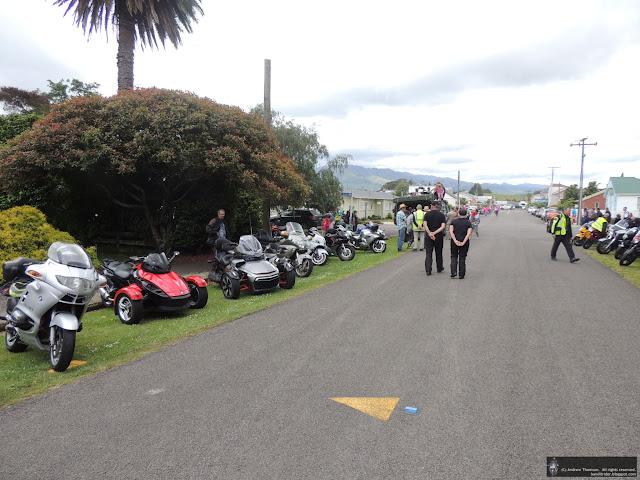 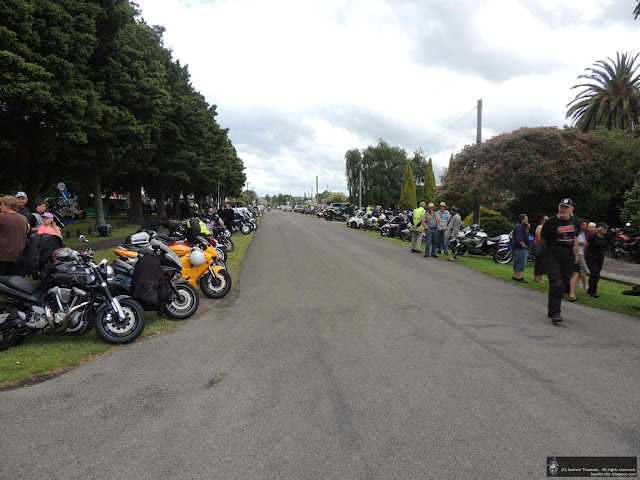 After lunch we did our normal vanishing trick by leaving before the bunch.  This helps keep us away from some of the squids that tend to come on this ride and gets us out to the beach in time to see all the bikes roll in.

The ride through to Makuri was a bit of a blast and I was able to park up for a few minutes and nab some pics of the guys going past.

After hurriedly packing away the camera I was off again, chasing the guys down.  With the help of some slow vehicles holding the guys up I managed to catch them and a few others on my way to Pongaroa.

In Pongaroa the guys went left while I went straight ahead to take in Coast Road and the great gravel out that way.  Almost straight away I was held up by a mob of sheep on the road but was soon through them and then into the gravel.  The road wasn't quite as fast as it usually is (a bit much gravel on it) but I still had a lot of fun on it but got very hot on what was now a very warm day.  A coke at the beach was just the ticket. 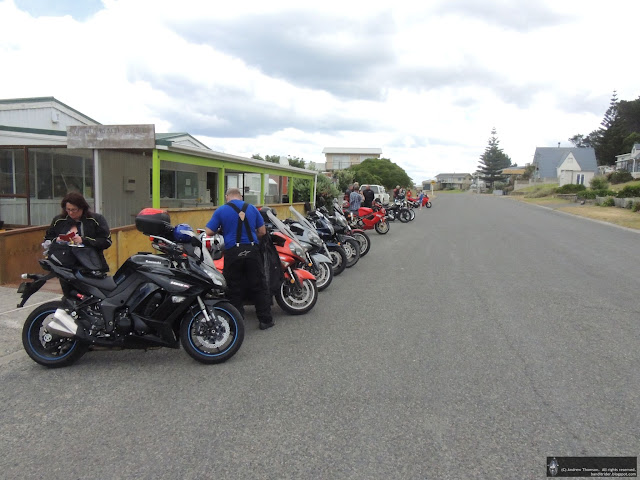 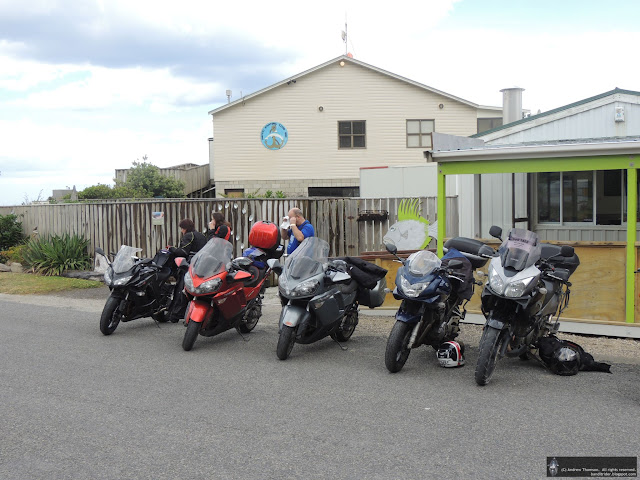 After watching all the others roll in and head for the prize giving it was time for us to start our trip home.  It was that hot that I opened up the big mesh panels in my jacket and pants...great idea...

Heading back I tucked in behind Mark and we settled into a quiet cruise.  Just out of Weber we caught up with the rain and this dramatically improved the cooling provided by those mesh panels...

In Dannevirke we waited for Dan & Roscoe to fuel up and then took off on the last leg back to Ashhurst.  Not far into we hit rain again and this time around I think we found all of it!  It fair bucketed down, even causing the traffic to slow up so we could spend more time in it...

By Woodville the rain had decided to pick on someone else and we had a pretty nice cruise back into Ashhurst where we stopped for a cold drink before heading finally home. 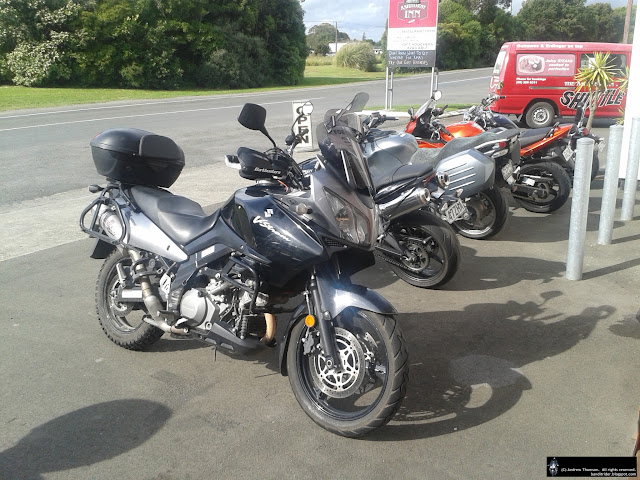 A nice ride of around 380km in both good and bad weather but good to get that 15th badge. 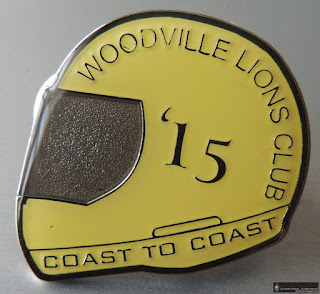 Email ThisBlogThis!Share to TwitterShare to FacebookShare to Pinterest
Labels: Coast to Coast, Rides

This is my new wallpaper image on my laptop: 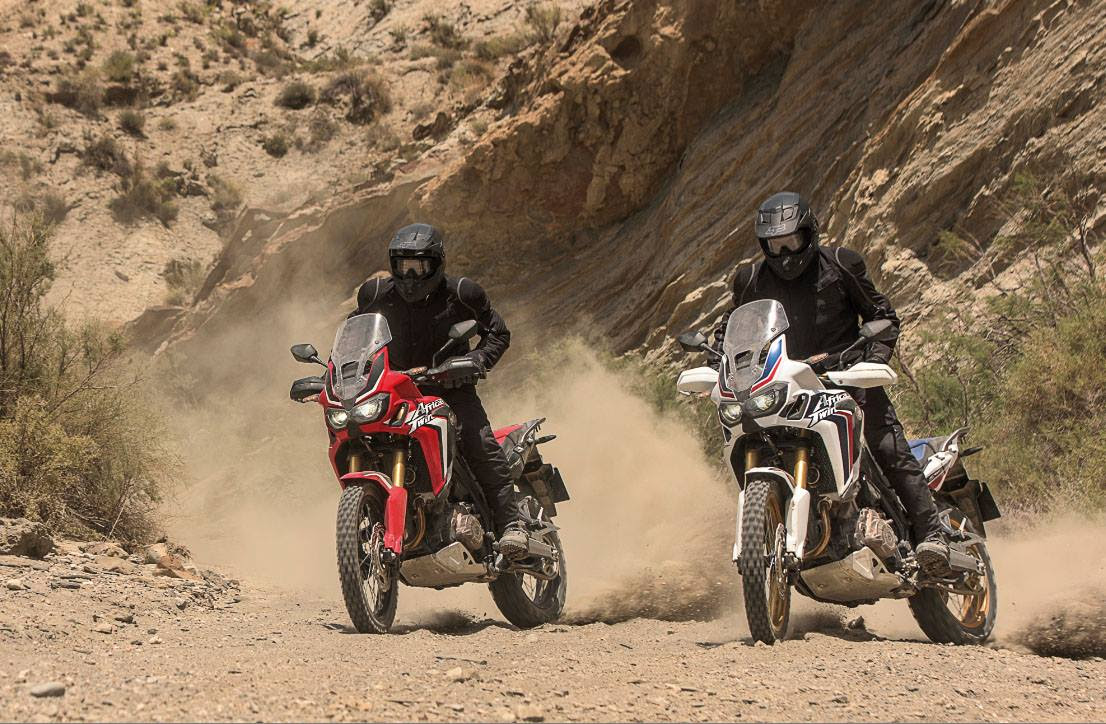 I thought you should know...
Posted by Andrew Thomson at 6:20 pm 4 comments:

Email ThisBlogThis!Share to TwitterShare to FacebookShare to Pinterest
Labels: Honda

Saturday was the Wanganui Toy run and as it was the weekend of our monthly BRRBT ride I decided that the Toy Run would do for our ride.  Knowing that the ride took in the Paraparas also contributed to the decision.

Connie Brian (stay tuned for the reason for the Connie prefix) popped around early to pick me up and the two silver bikes made our way over to the BRRBT meeting point in Feilding.  For a while it looked like we were it but then this dirty old thing showed up. 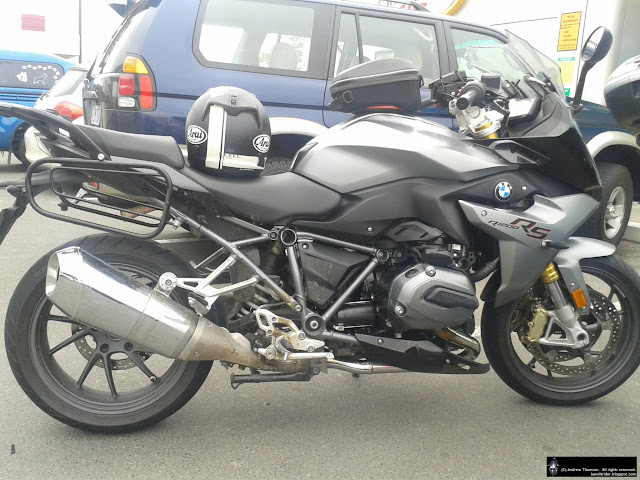 Blow me down, it was BMW Brian on his new horse...

After the obligatory oohing and arring over the new bike and hearing about BMW Brians licence "issues" we decided that three was the total number of BRRBT riders coming and headed on out through Halcombe to Wanganui.

Arriving in Wanganui with plenty of time we found drinks and wandered around looking at some of the other machinery. 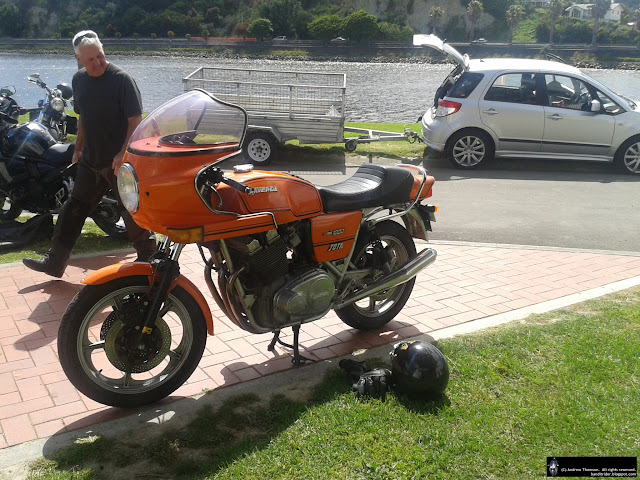 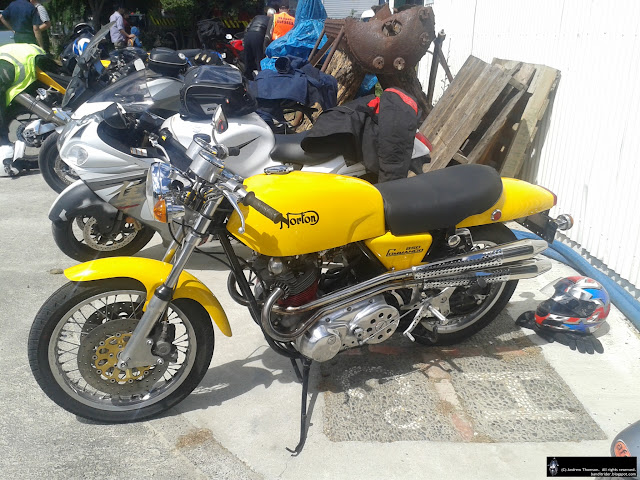 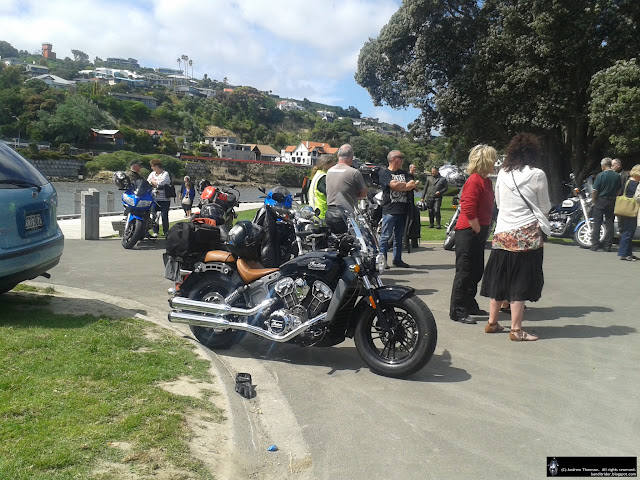 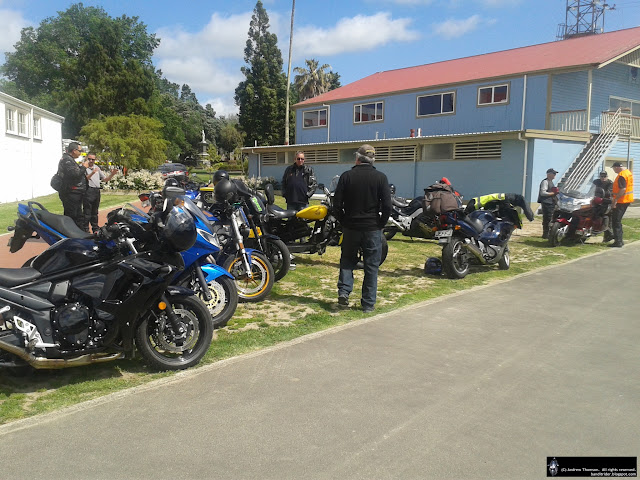 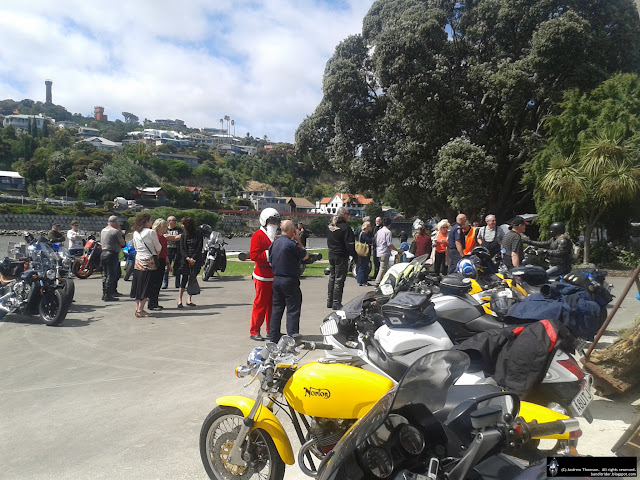 Not a bad day in Wanganui either: 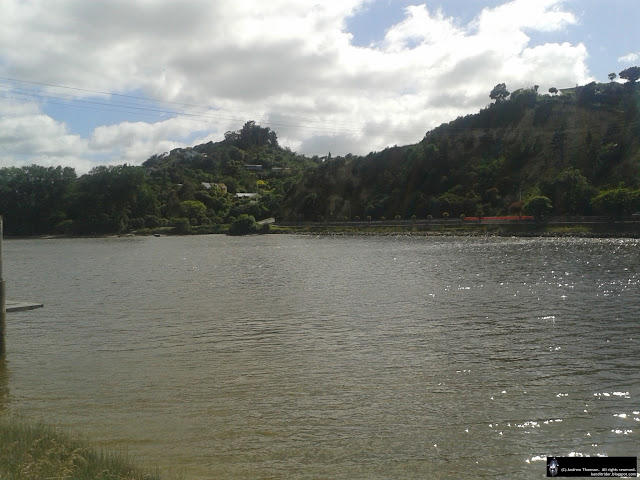 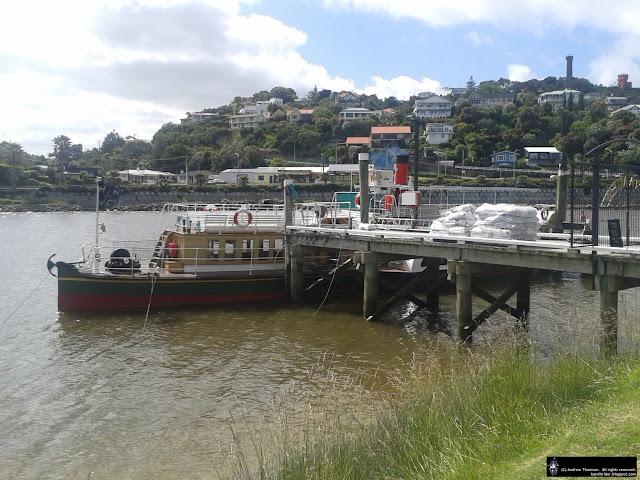 By the time of the ride briefing there was nearly 50 bikes lined up and we were even joined by at least 5 other riders who have joined us on BRRBT or BRR Adv rides.  One of these was Peer and he ended up leading the ride on his new GS.

Peer lead us up the main drag of town (a slow process on a busy Saturday morning) and then out of town and onto the Paras.  Peer was doing a great job of keeping the ride under control and moving at an easy pace for the pack to keep up.  BMW Brian and I settled in behind him for a while but then when we started getting stuck into the delicious corners were forced to sneak past for a little fun.

In Raetihi we stopped for lunch (whereas the toy run carried onto Ohakune for lunch) with the idea being a return trip via the River Road. 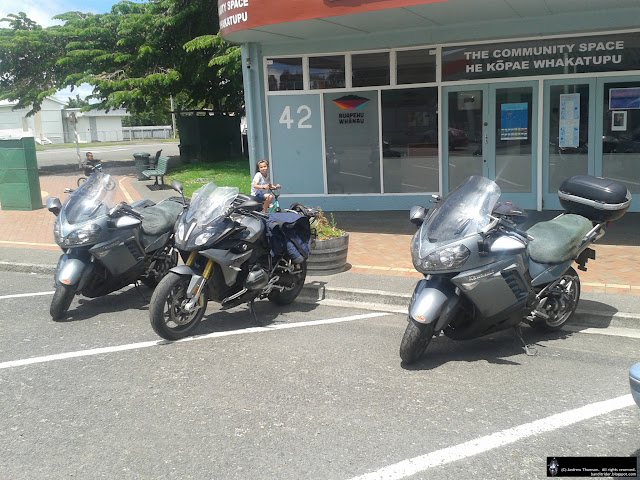 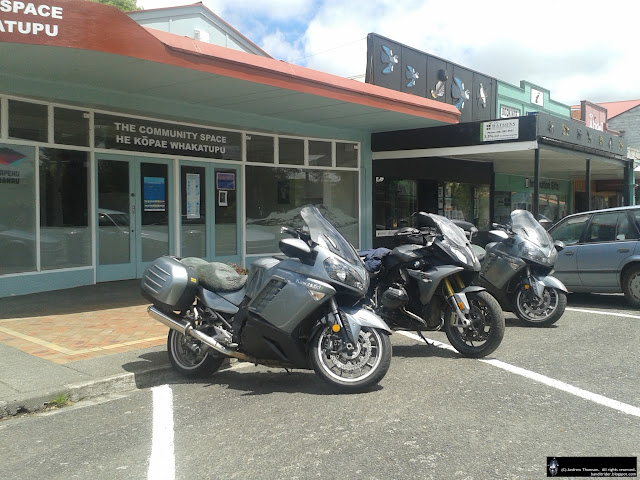 Unfortunately for us we discovered (by means of whopping big sign that only I saw) that the River Road was still closed due to damage caused by the flooding a few months back - bummer!  As an aside, the Paras still (for the same reason) have a lot of road works on them with no fewer than three sets of lights controlling single lane sections.

So, rather than scooting across to Waiouru and crawling home via SH1 we decided to retrace our steps back down the Paras with a couple of small deviations where we could.


A nice little ride of around 380km all up and in pretty good weather except for the blimmin wind!  Where to next weekend?
Posted by Andrew Thomson at 8:02 pm 4 comments: