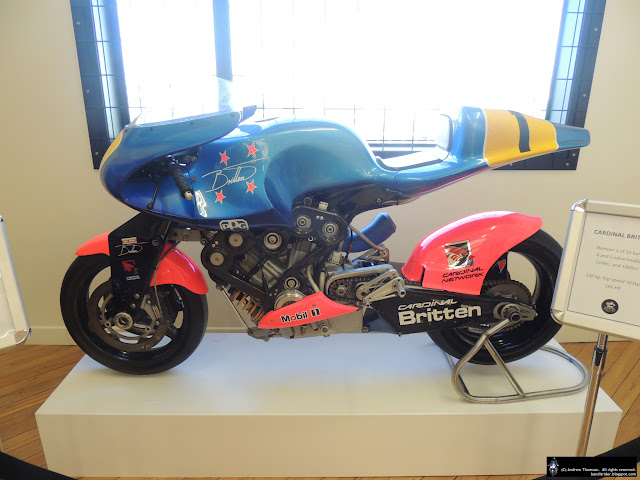 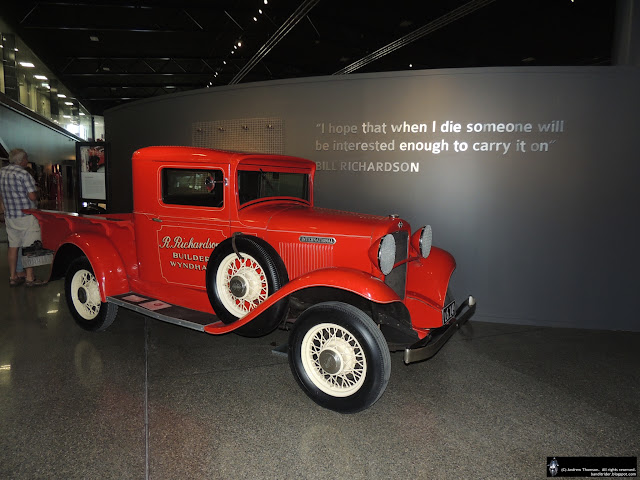 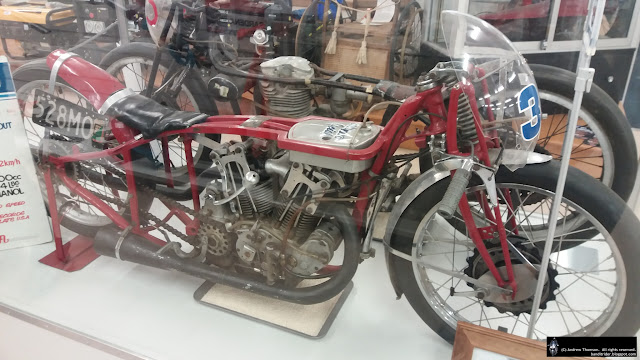 Posted by Andrew Thomson at 6:39 pm No comments: 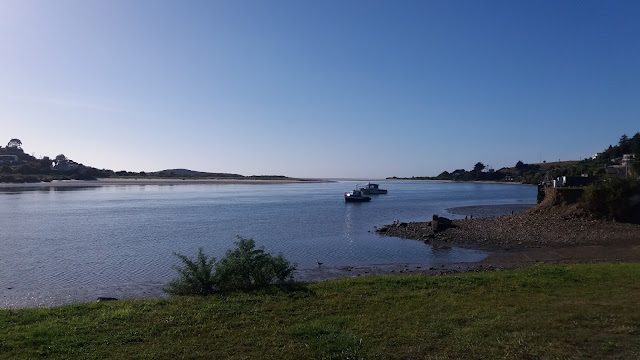 Posted by Andrew Thomson at 8:17 pm No comments: 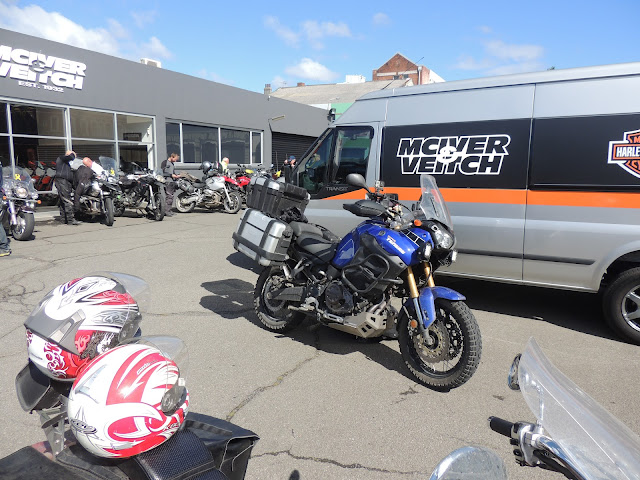 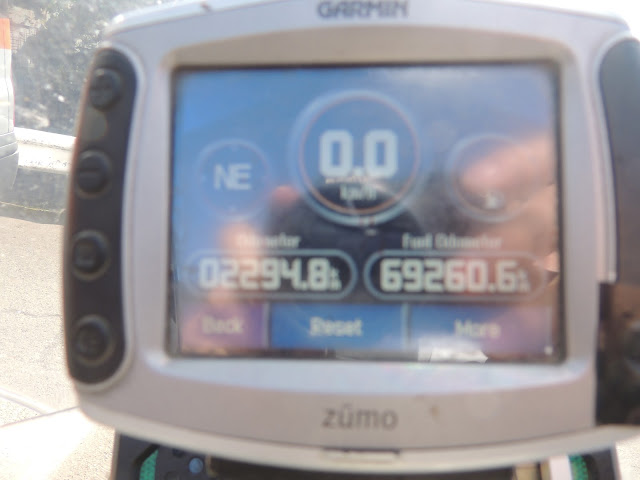 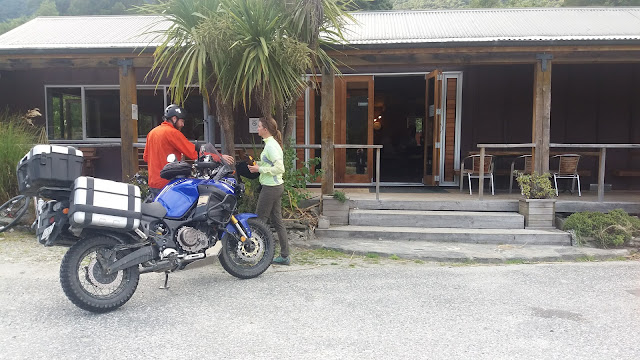 Lunch in Makorora.
Posted by Andrew Thomson at 7:40 pm No comments: 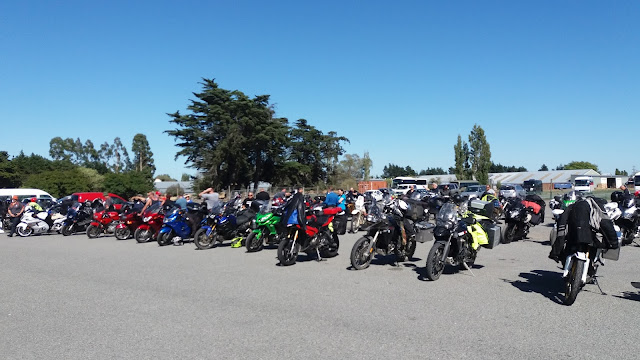 Posted by Andrew Thomson at 9:01 pm No comments: 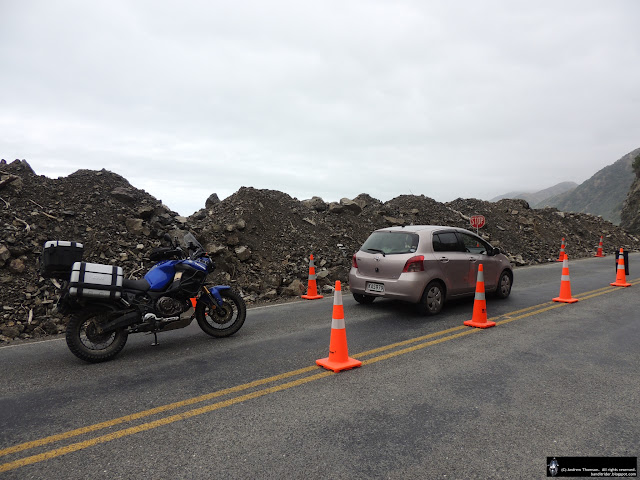 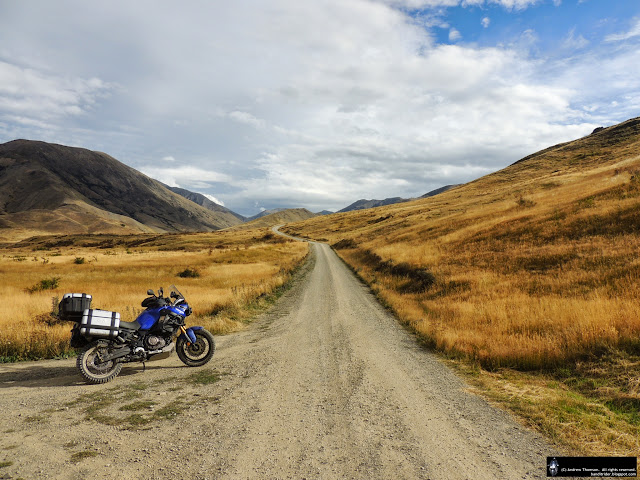 So New Zealand immigration stuffed things up again and let in a bunch of bike mad Aussies (including one Chillertek) and also let them loose on our roads on hire bikes!  Oh the humanity!

After visiting Geoff out on the Coro Loop they made their way around the various pie shops and pubs on the East Coast before finally arriving in beautiful Palmerston North on a pretty damn nice day.

I had been warned that there were coming and so on my way home from work I decided to cruise past where I thought they were staying.  While parked at a set of lights two of the gang rode straight across my bow while the other two got stuck at a light.  I quickly rode around the corner and leaped out of the car to flag them down.  I got a wave from one of them but they carried on not knowing who the mad idiot waving at them was...

A text to Chillertek brought a reply saying that they had bike trouble and were making for Supercheap.  I got back in the car and drove around to Supercheap to see four guys pulling a Triumph (figures eh) to bits...

Apparently the bike had been playing up for a while and even a new battery hadn't fixed it.  After some fiddling with different bits and bobs the bike started and I suggested that they bring it around to my place where there were tools.

I trundled off in the car and didn't even have time to warn the neighbours before the four horsemen of the apocalypse arrived and started tearing into "the Black Pearl".


Much diagnostic experimentation ensued with bits of bike being pulled apart, prodded, lubricated, hit with hammers etc but still the Black Pearl would not fire up.

Sick of the damn machine, Geoff admitted defeat and called the rental outfit.  Naturally, as soon as he started talking to the guy, the bike decided to go.  And the next 4 times he tried...Then the rental guy came out with, "it does that".  Brilliant, this guy hires out a lemon without telling the rider and lets them take it out into the wop, wops (BTW: Palmy is not in the wop wops), nice guy.

With the bike running again, the guys headed off to their motel and I then followed along after to have a meal with the lads.  It was really cool chatting with them and finding out about how their trip was going etc.  It was great to hear that they were having a good time and enjoying our back roads and also of course, to get to know Chillertek who's blog I've been reading for some time.

Update: it seems that the Black Pearl is still running and that the guys are still tearing up the North Island.  Awesome stuff!  Have a great trip chaps and I'm looking forward to reading all about it Chllertek! 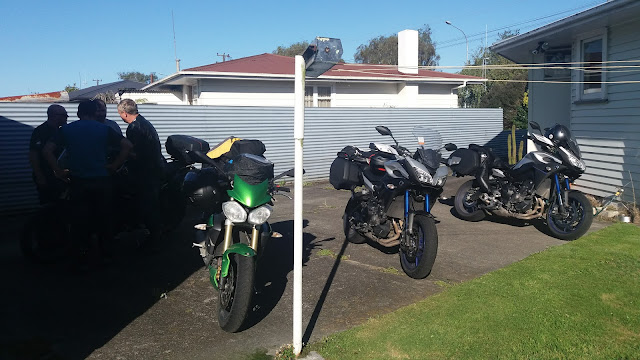 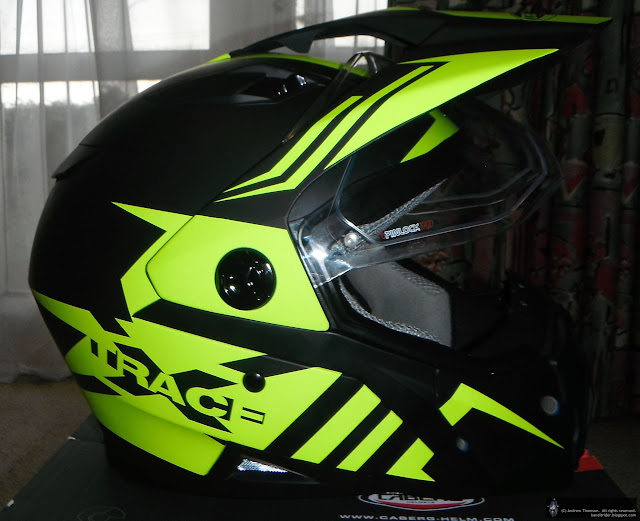 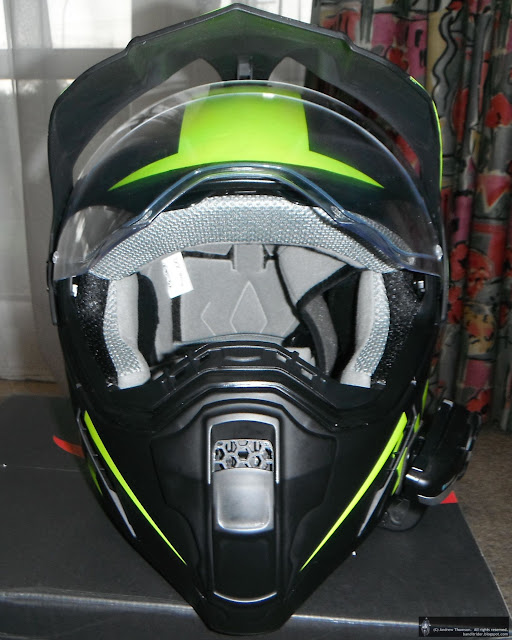 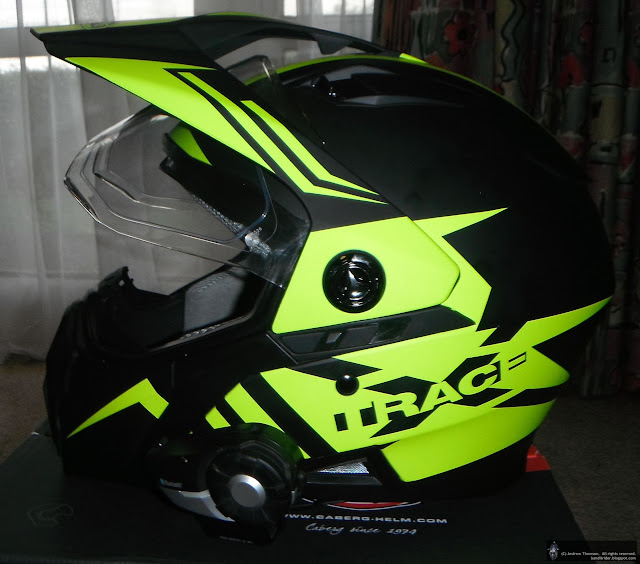 Oh, and the Tenere has new rubber and rear brake pads...
Posted by Andrew Thomson at 8:06 pm 6 comments:

Righto, so Saturday's ride had another purpose and the reason why I went so late and came back in the dark was because I had to try out my latest farkle...

So anyway, the stuff all turned up once I'd paid the taxman and a couple of Friday's ago I tore into the install.  I was initially a bit daunted, not wanting to stuff it up but in the end it was a piece of cake.

First up was the mount.  This fairly basic but it does mean I have this spare piece of plastic with no use anymore. 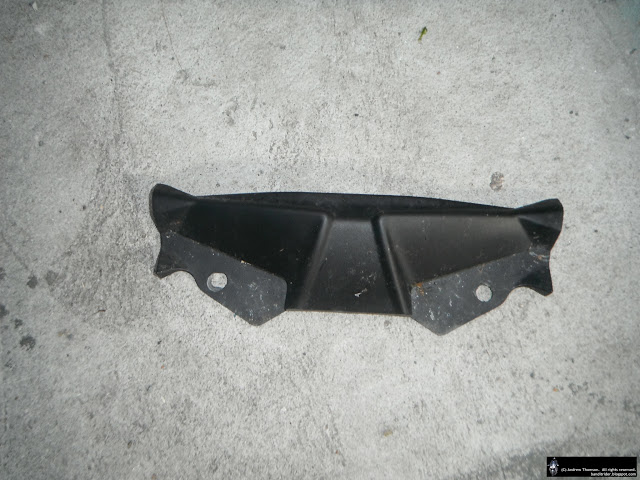 The mount dangles down below the main headlight and provides a nice sturdy home for the lights. 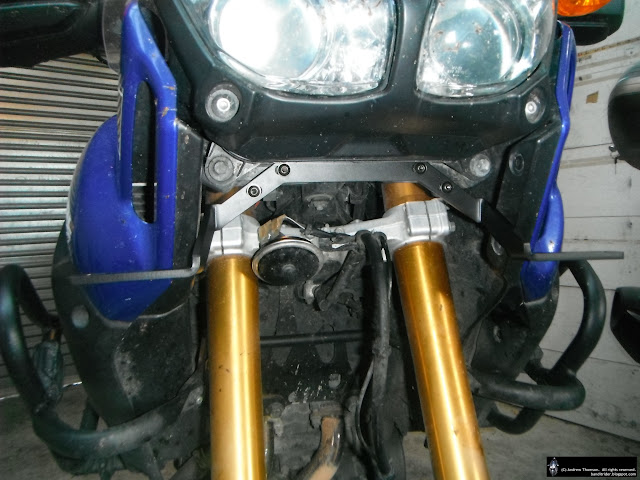 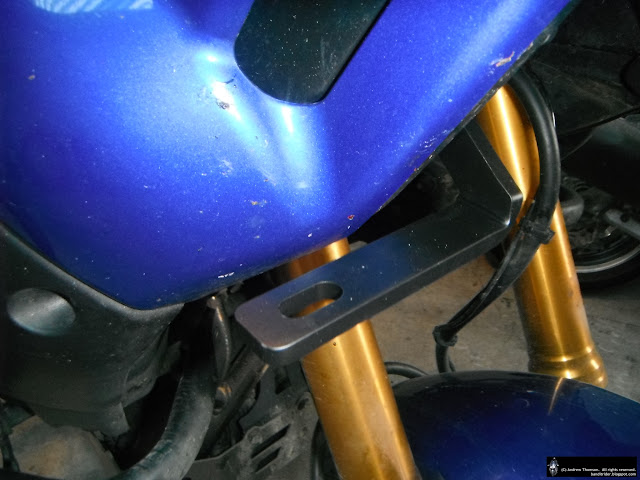 Next up was the scary part, wiring things up.  But with the help of the interweb it was a piece of cake.  It was easy to hook the harness to the battery but then I had to locate the high-beam wire and tap it - that's where the web came in handy and the job was soon done. 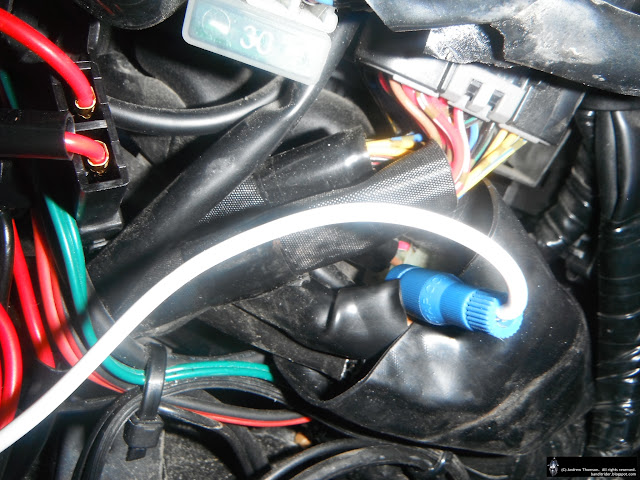 I then quickly tested everything and was rewarded with plenty of working light in the shed.  The last job was to tidy up the wiring, mount the switch and tighten up the lights on the mounts after setting up the angle of them. 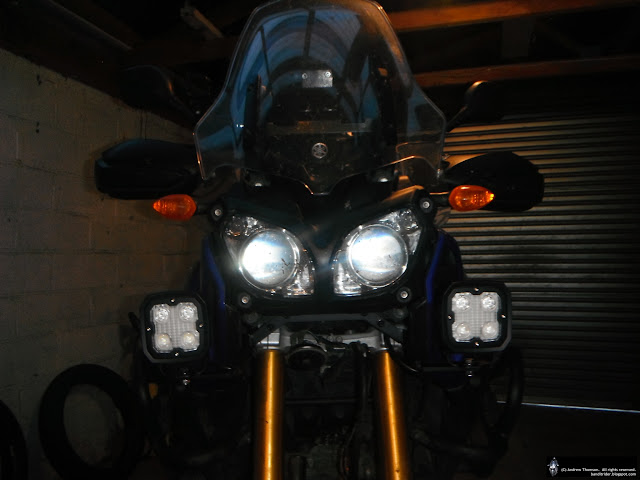 Disappointingly, it was still light outside when I finished so I geared up and rode over to the old's place to zap them through the lounge window and await proper darkness.  When it finally got dark I mounted up and went off for a proper test.

Each of the lights has 2 led spots in them and 2 that act as floodlights giving a wider beam of light.  The floods in particular really impressed me.

So, just out of town I stopped and got ready to film their effectiveness.  Unfortunately, my GoPro session decided to have one of its moments and just wouldn't play ball.  So, all I got to show for my ride in the dark was some very crappy photos that don't really show a lot...


On Saturday's ride I swapped GoPro's and finally got some semi-decent video of the lights in action.  I still reckon that the video doesn't do them justice...