The Wairarapa in winter 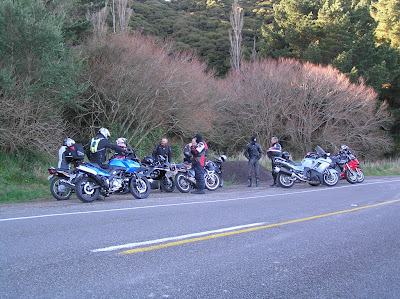 After being cancelled last weekend due to nasty weather it was great to wake up to a fine day and get ready for the Fielding Riders' ride through to Martinborough.

I left home just before 9:30 and topped up the bike on the way out town. The meeting place was at the bottom of the track and when I pulled up I met up with Al and a couple of guys who had braved 1 degree temperatures on their ride over from Masterton.

Not long afterwards the rest of the gang rolled up and we didn't muck around too much before we got on the bikes and hit the track. Al and I had a nice blat over the track and after waiting at the bottom of the hill for a tick, we tagged back on behind the rest and continued on to Pahiatua.

In Pahiatua we had a brief stop so that everyone could catch up and a warning was passed onto us by Radar about some dodgy conditions further on down the road. Soon we were back on the road heading out the Mangaone valley. The pace was kept at a sensible speed as the road was damp in places and can be prone to the odd bit of loose metal.

Our next stop for a re-group was at Alfredton and the general consensus was that things were a bit chilly but the riding was good. On down Route 52 we went and it was great riding spoilt only by a bit of misty rain in places.

Another quick re-group at Te Ore Ore and then we were off into the unknown (well, for me anyway). We turned off Castle point road and rode through some great country roads to Wainuioru, Gladstone & Longbush. 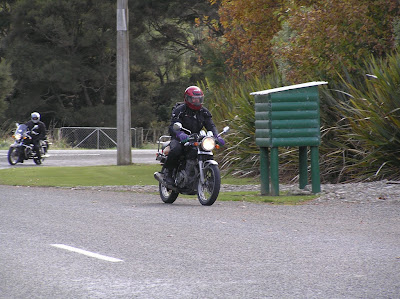 Just before we got to Martinborough Bonez started waving and wobbling around a bit and pulled off the road. When we all stopped he gave us the bad news - Gerble (his GB400, see piccy) had died. The bike had had some kind of seizure and the rear wheel had locked up on him and he had to pull in the clutch so that he could stop safely. Bonez tried kick-starting the bike and we pushed it around a bit but could not get it things to turn they way they should - damn!

Poor old Gerble ended up getting towed to a farmer's house and Bonez took the co-pilot's seat on the Connie for the ride into Martinborough. On the way into Martinborough we got to enjoy a few nasty little showers so the hot lunch and drink was quite welcome when we stopped.

After lunch we took a quick diversion to have a peak at the Stonehenge replica before cruising into Masterton. As we'd had a bit of rain here and there and there were quite a few cold bods we decided to flag the excursion to Mauriceville and took the main road back to Pahiatua. In Pahiatua we stopped for coffee and a chin-wag before the final leg home.

For the last little squirt Leonie (who was feeling the cold a bit) handed Bonez the keys to her mighty 225 and stole Bonez's place on the Connie. The rest of the ride was just a quiet pootle but the highlight was Bonez pulling off a wicked passing move in the gorge where he took out 3 bikes in one hit on the little Yamaha - nice.

It was nice to get home after and into a slightly warmer environment but dodgy weather or not it was a great ride through some really nice countryside. Already people are talking about re-visiting some of the roads come summer... 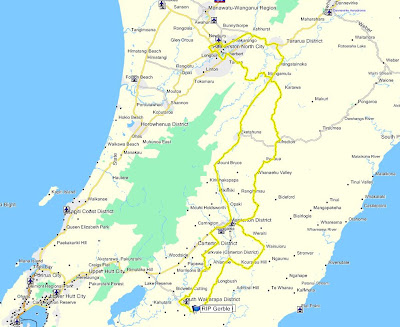