Earlier in the week Neil emailed me asking if I was a keen for a wee gravel ride up his way.  With the weather looking really good for Saturday I spent a lot of time wondering whether I was keen or not...

So on Saturday I got up early and put on plenty of warm gear for the ride up to Taumarunui to meet Neil.  First up I fueled the DL and was on the road just after 7am with the skies just beginning to lighten.

Apparently it was breakfast time for hawks as I disturbed a couple of them scrapping over a fresh possum in Cheltenham (yes, in the middle of the road) and another one just up the hill a bit.  Besides the hawks I pretty much had Vinegar Hill to myself and made good time through to the SH1 turn-off.

Riding up SH1 to Mangaweka the temperatures dropped off a bit but the day was shaping up nicely with clear skies as far as I could see.  Arriving in Waiouru I stopped to pick up some lunch to take with me and received a text from Neil informing me that it was pretty chilly.  I replied that it wasn't to bad in Waiouru:

Now I had a decision to make on which way to go to meet Neil in Taumarunui.  I had plenty of time so I decided to take the longer route up through the Desert Road as I was pretty sure coming home I'd want to get home as quickly as possible but wanted a little variety in my journey up and down the island.  Going through the Desert Road also gave me the opportunity to stop for a few pics too: 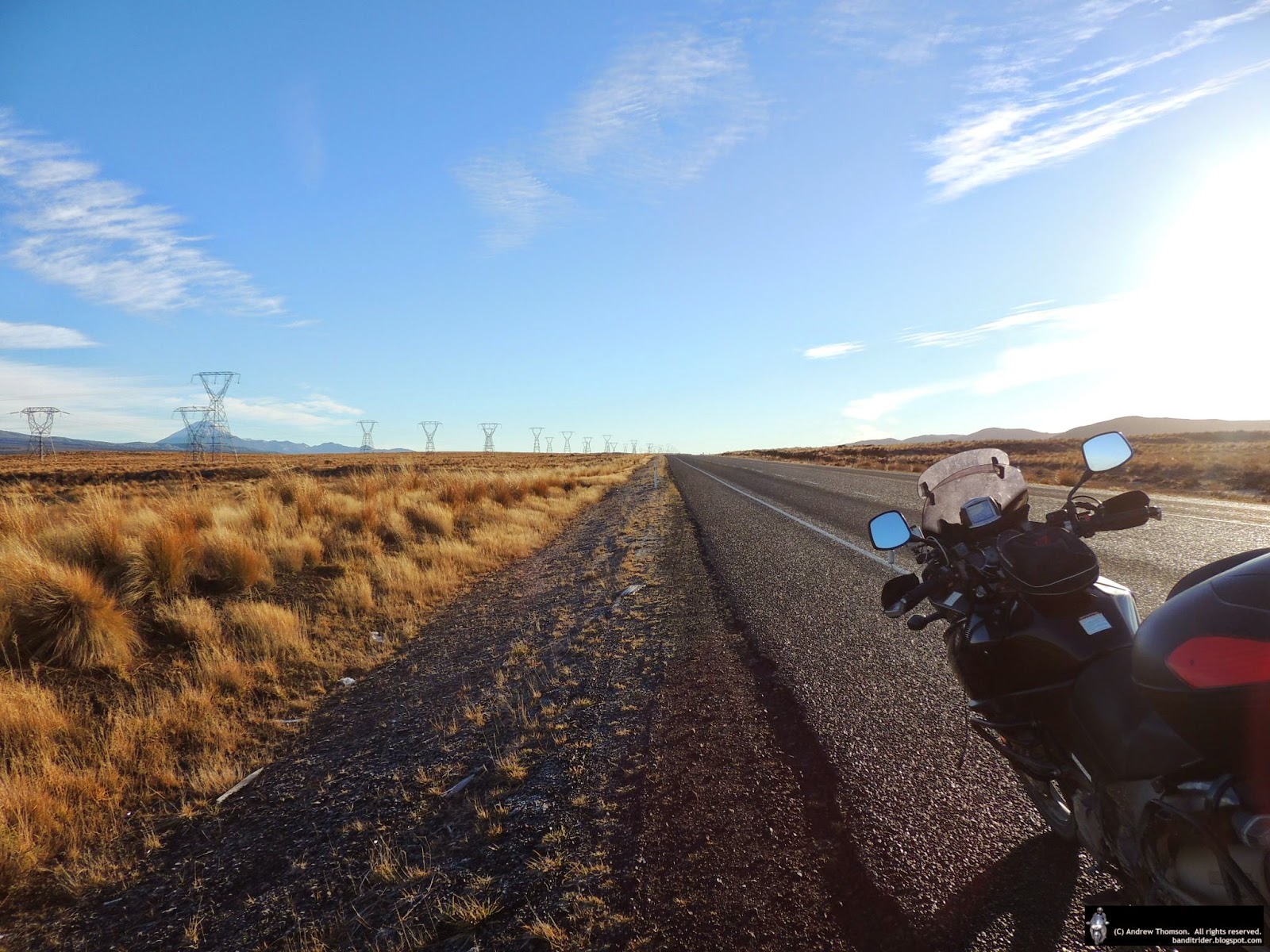 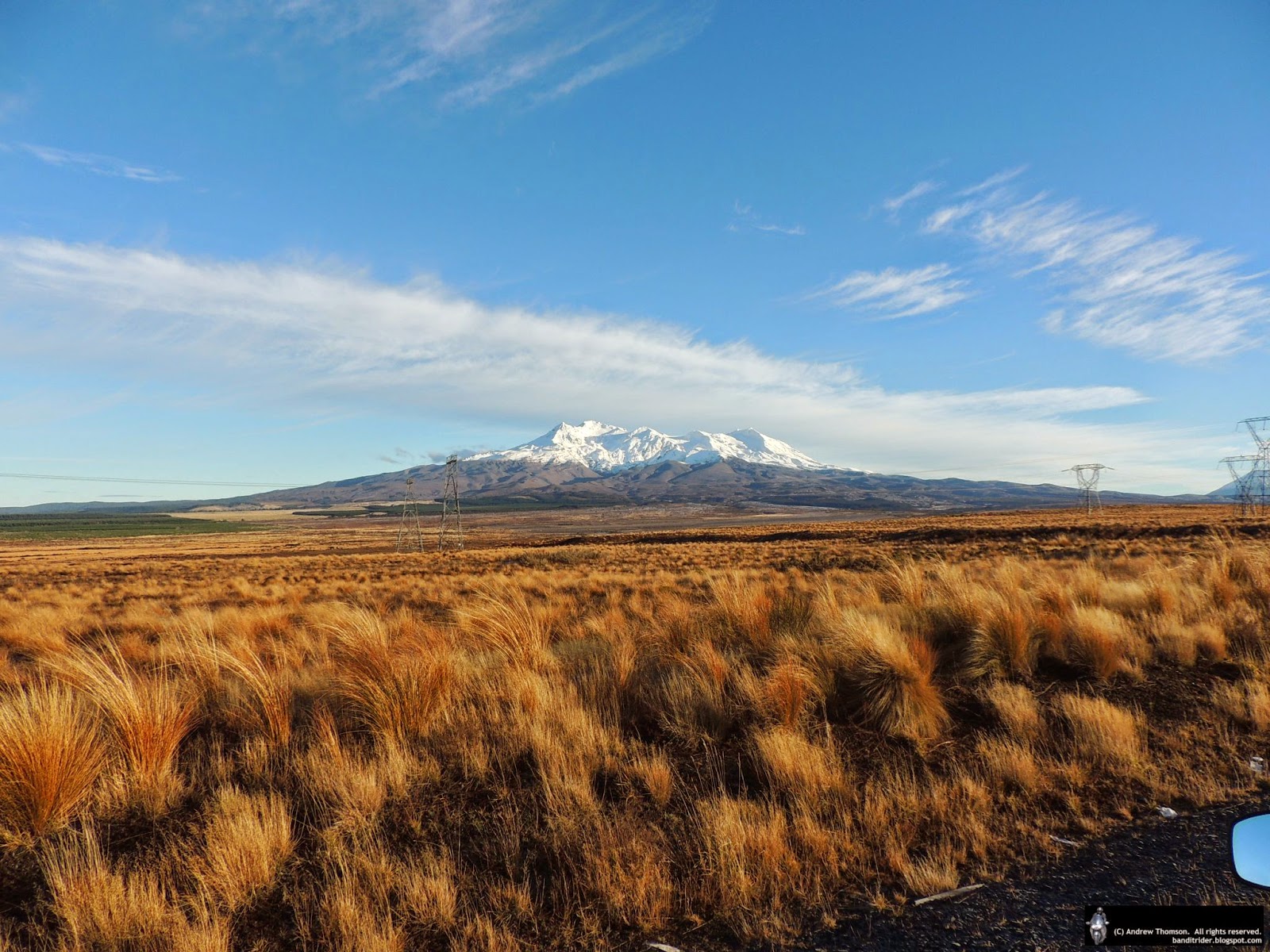 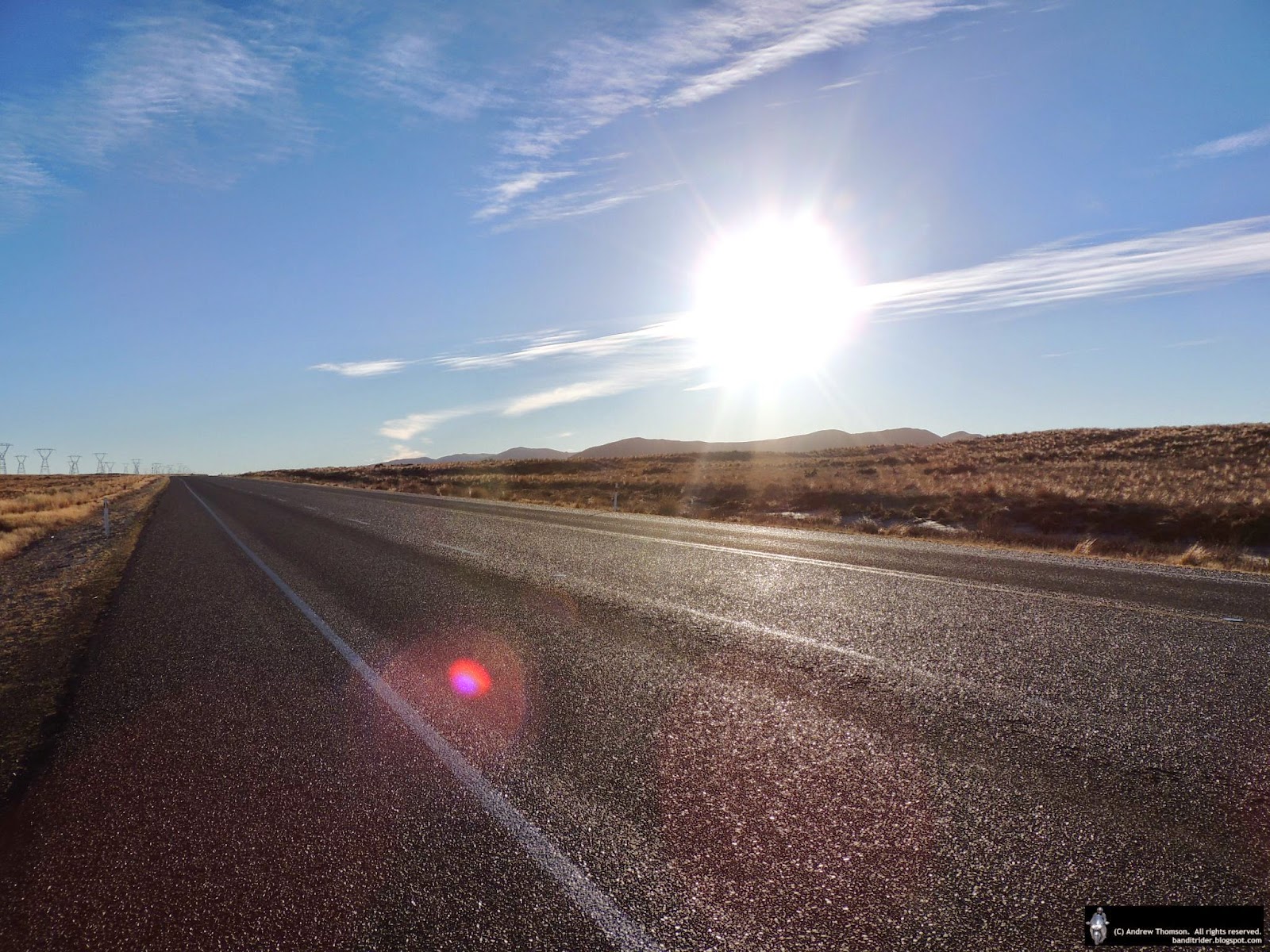 No snow or ice on the Desert Road yet but it was still fairly crisp and cool.  But, as I said to Neil later, it was such a magic day that it's impossible for a picture to capture it.  The normally quite boring (nowhere near enough corners) ride up was anything but - I was really just enjoying soaking in the day.  Truly magic riding conditions!

Instead of riding into Turangi I turned North to ride up over the hill to Taumarunui.  This bit of road is fantastic but it was damp in places and frosty too so I took a bit of care.  Dropping down into Taumarunui I had to descend into fog and the temperature dropped markedly.  It was foggy (although visibility was not too bad) all the way into town and Neil reckoned the temperature was about 1.7C.  Not warm in other words.

I refuelled the DL and then parked up at the local Maccas for a hot drink and a bite and then Neil and I tried to work out how many layers we were going to need for our gravel ride.  Adventure riding can be hot work so in winter it's always a bit of gamble on what is the right amount of clothes.  In the end I removed a layer and swapped to my thinner gloves.  The hot grips were left on!

Our first bit of gravel was a little squirt up a hill only just out of Taumarunui and it was a good warm-up for the rest of the day.  About 5 or 10 minutes of it got us to a great posy for some pics. 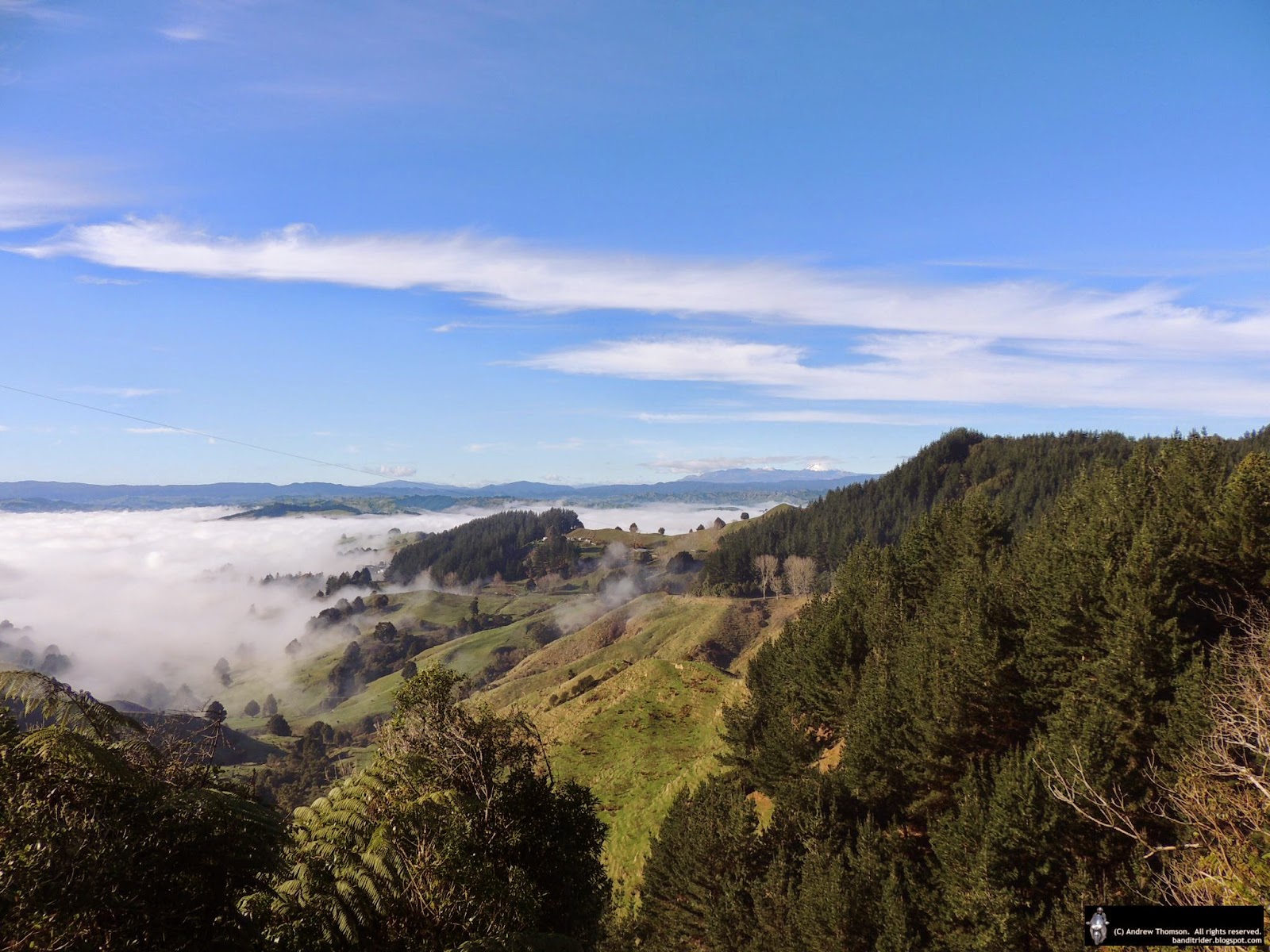 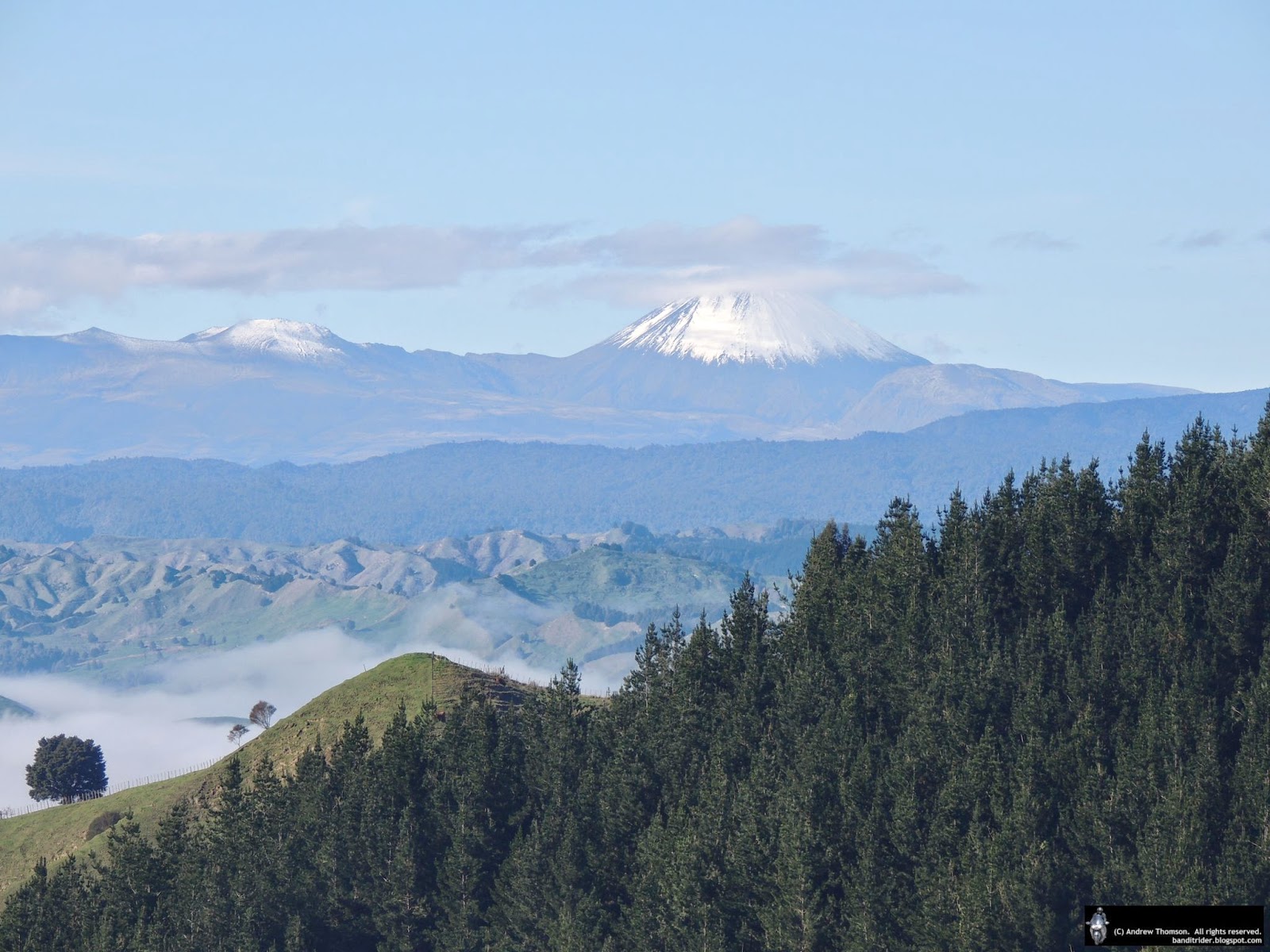 Back on the bikes it was time to ride down the other side of the hill:


After this we squirt Neil pulled over and decided that he wanted a ride on his favourite V-twin so we ended up swapping bikes for pretty much the rest of the ride.

Our next bit of gravel took us into some slightly tighter country surrounded by some great native bush.  We overshot a spot where Neil was going to stop for more pictures but ended up finding another nice spot in the bush by someone's driveway. 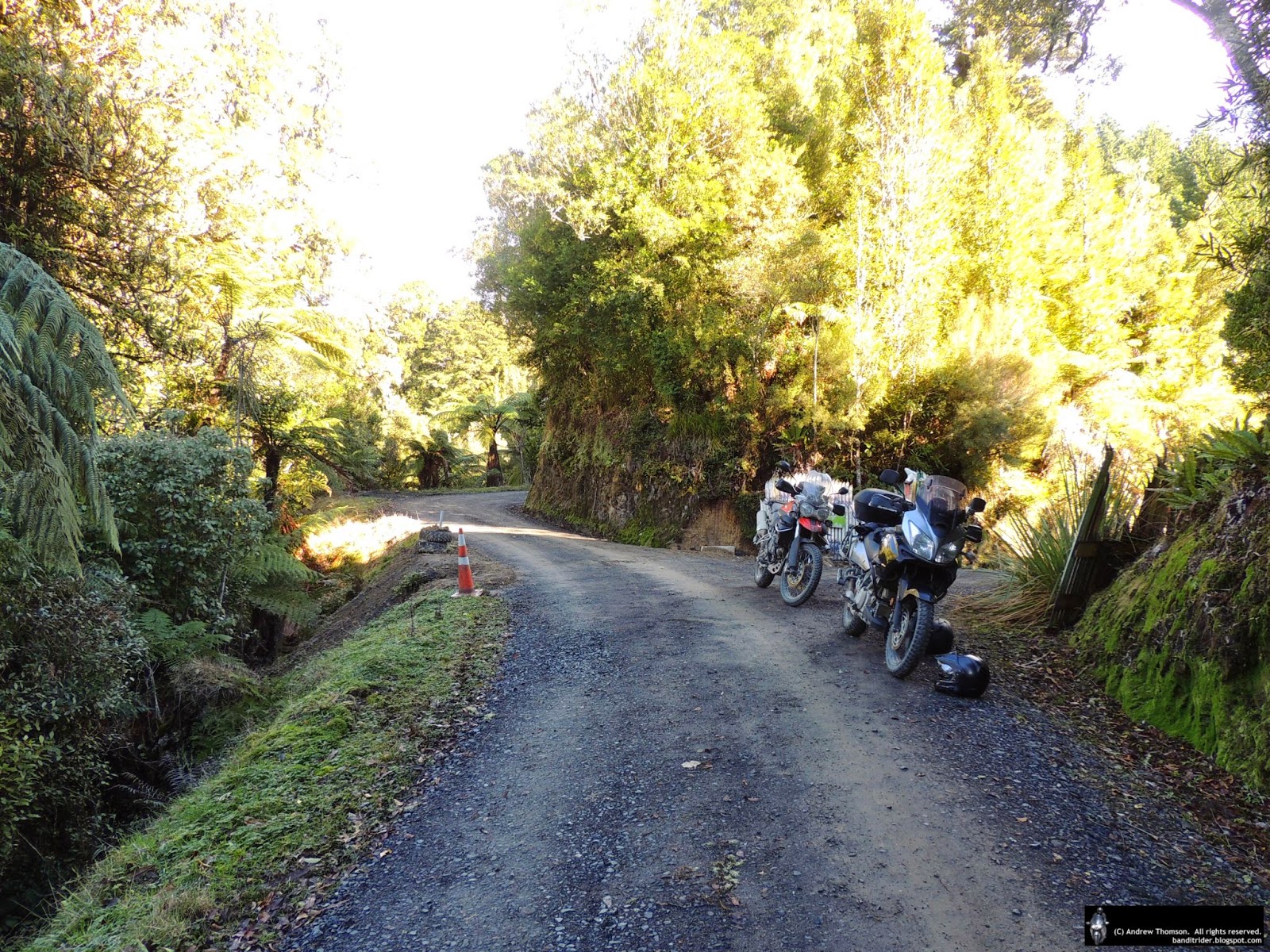 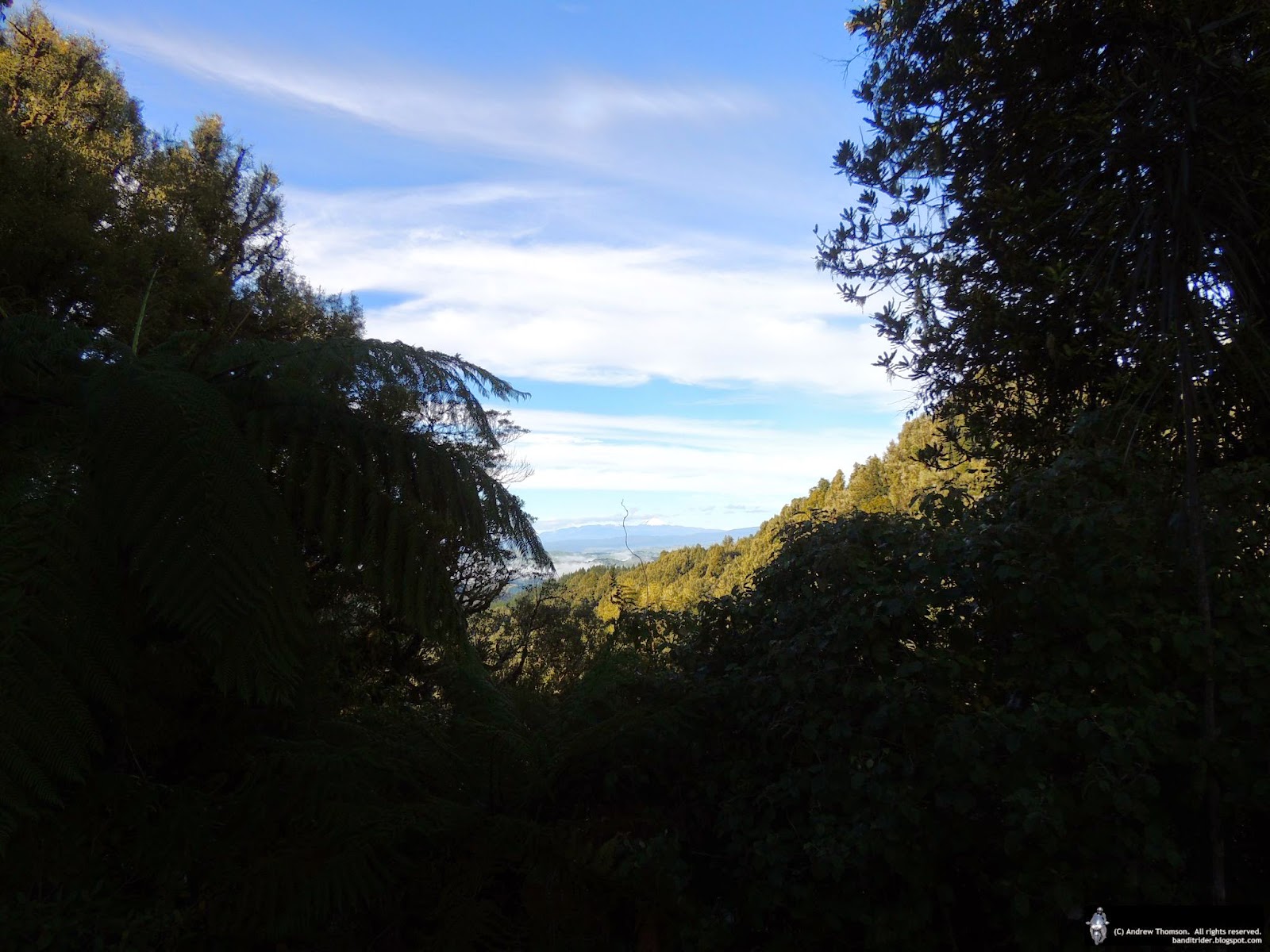 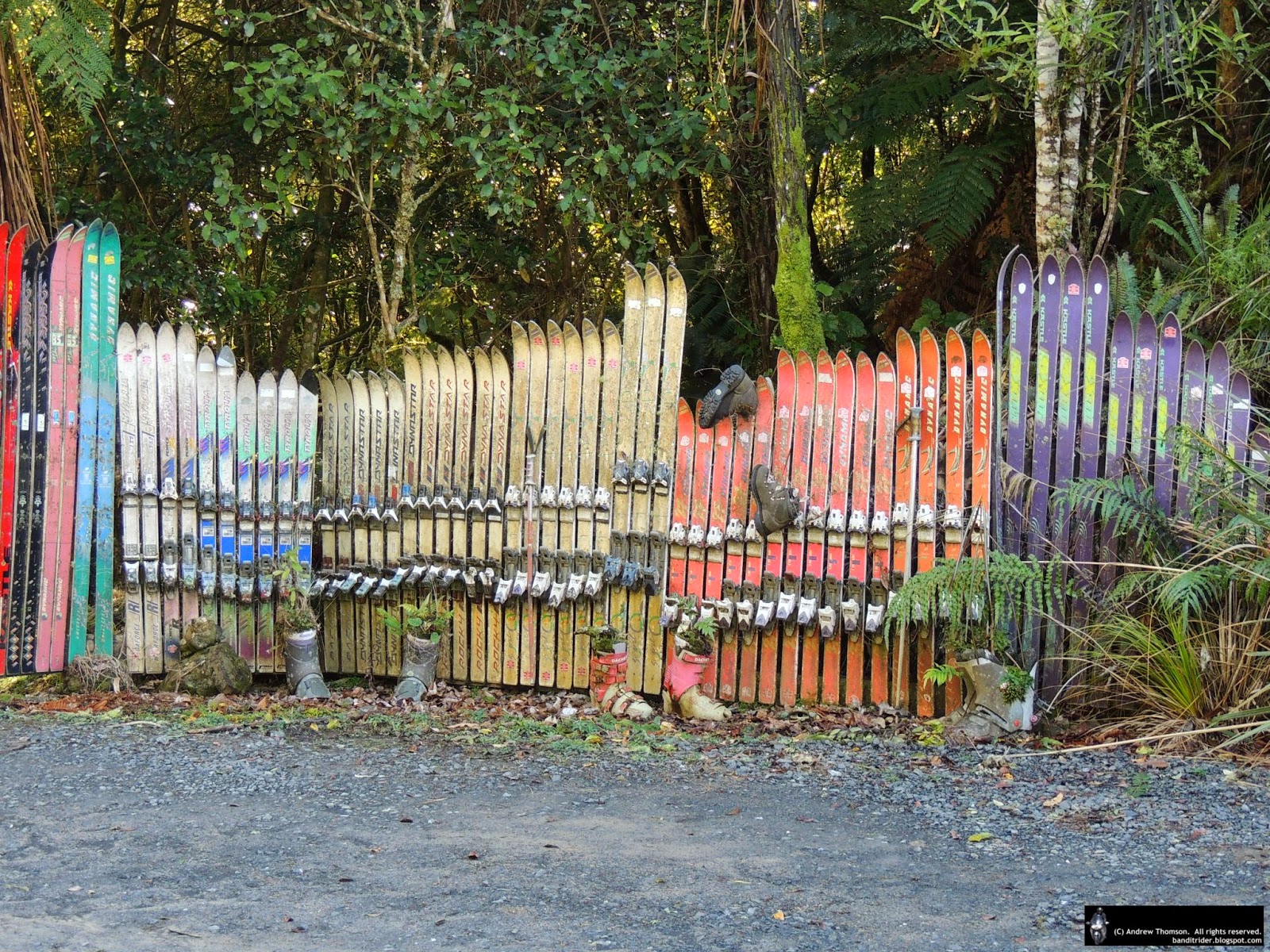 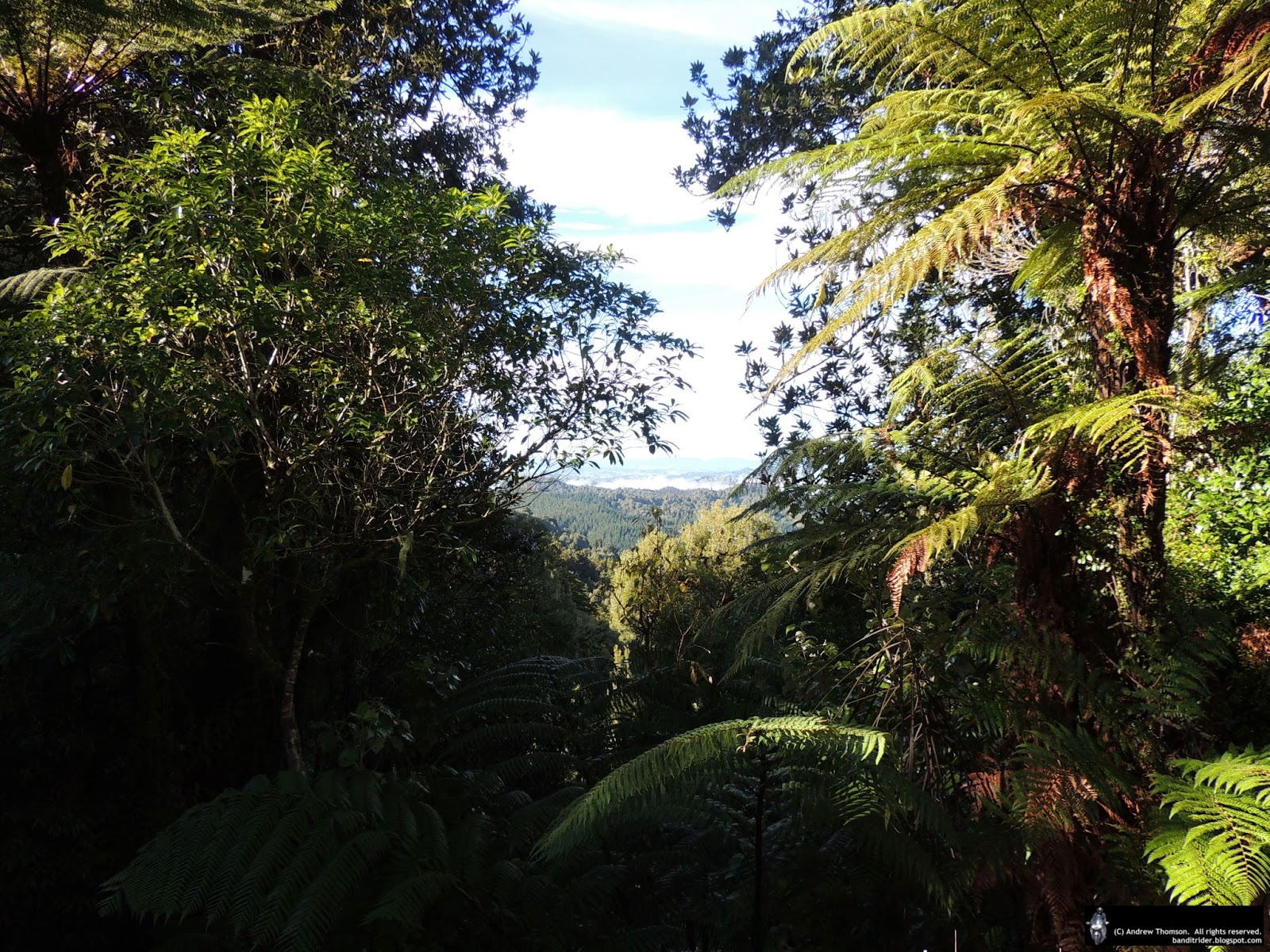 Pretty soon we broke out onto SH4 and after a few km of tar turned off to cross over the other side of the highway and take in Ongarue Road.  This was one I'd done before but it is a neat bit of gravel that eventually spat us back out onto SH4 again.

But we didn't stay on the tar for long as we turned off onto Mangapapa Road.  Somewhere in here I came close to dying of laughter.  As we rounded a corner Neil encountered a large mob (mob, gaggle, gobble, herd, flock, school) of turkeys - as in he arrived suddenly in the midst of them.  I saw brake lights, swerving, ducking, feathers and turkeys hurriedly trying to take flight and get out of the way of a bellowing and slightly sideways V-Strom.  Then I arrived amongst the stragglers...

Somehow neither of us collected any poultry and casually carried on our merry way.  I'm sure the turkeys were a bit more rattled and are probably now nesting in the trees...

After this bit of excitement the road straightened out a bit and as it was in perfect condition we were able to clip along quite nicely.  We did however catch up with a grader who was working on the road and had to ride on some of the road that he had already worked on.  Luckily, even though the grader had been through there was not a lot of gravel on the road, just the odd bit of soft earth and such.  It just added a little something more to the ride.

One last little squirt up a hill brought us to a little reserve where we parked up to attack our picnic lunches.  Quite a nice spot it was too. 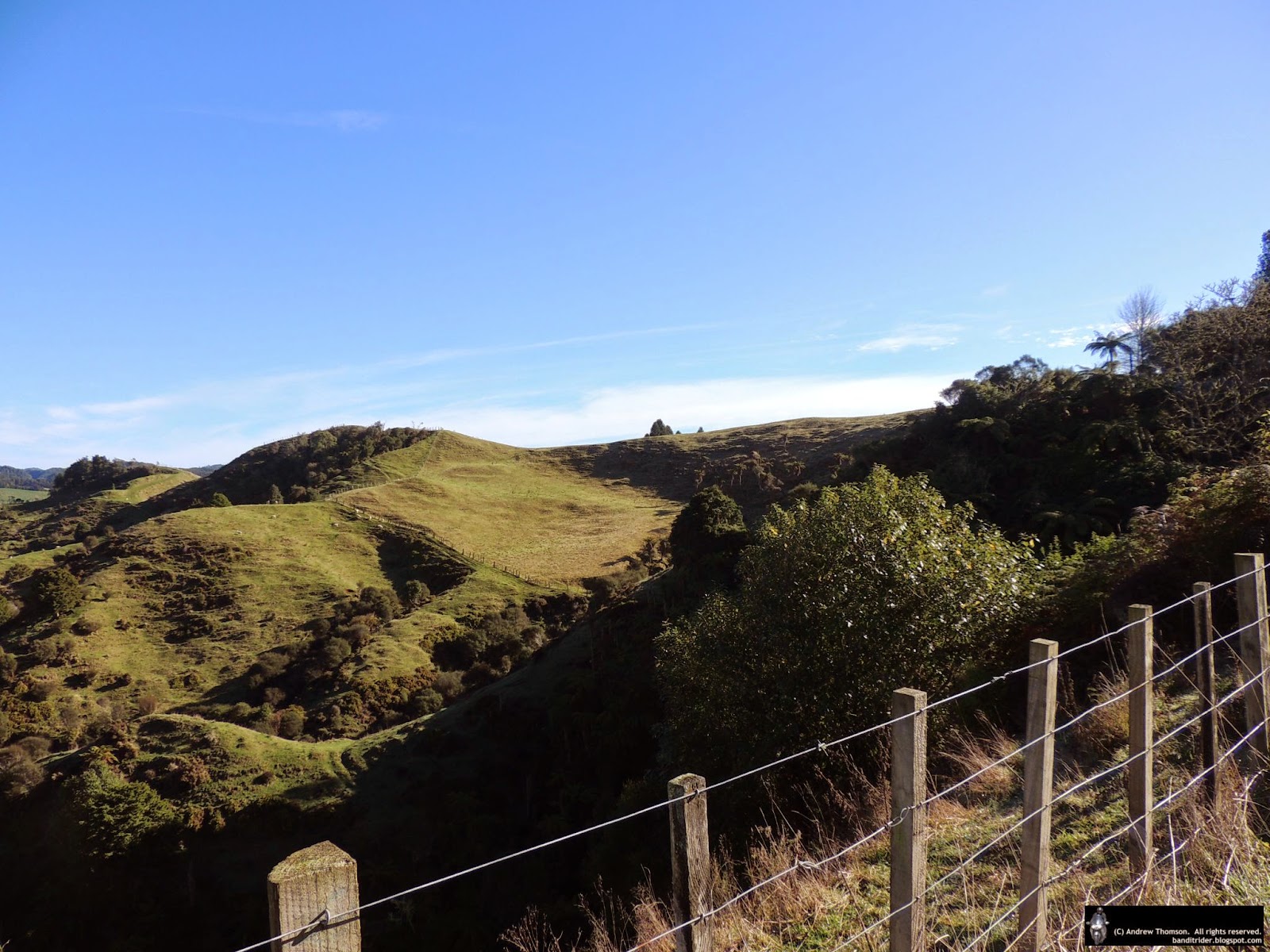 While we were taking a break Neil readied his latest GoPro farkle for our afternoon run.  Then he took off on the Vee again.

Pretty soon were had left the graded roads again and got onto some fantastically smooth gravel.  It was great riding through pretty open country surrounded by pretty farmland.  After another turn-off the gravel changed again and while it was pretty grippy it was very easy to dial up pretty smooth power slides so was a hoot to ride on.  Neil's new farkle was also pressed into service.

After more great gravel we arrived in the bustling metropolis of Ohura but rather than getting caught up in the hustle and bustle of Ohura on a Saturday afternoon we turned off immediately and clambered up another sweet section of gravel to this viewpoint. 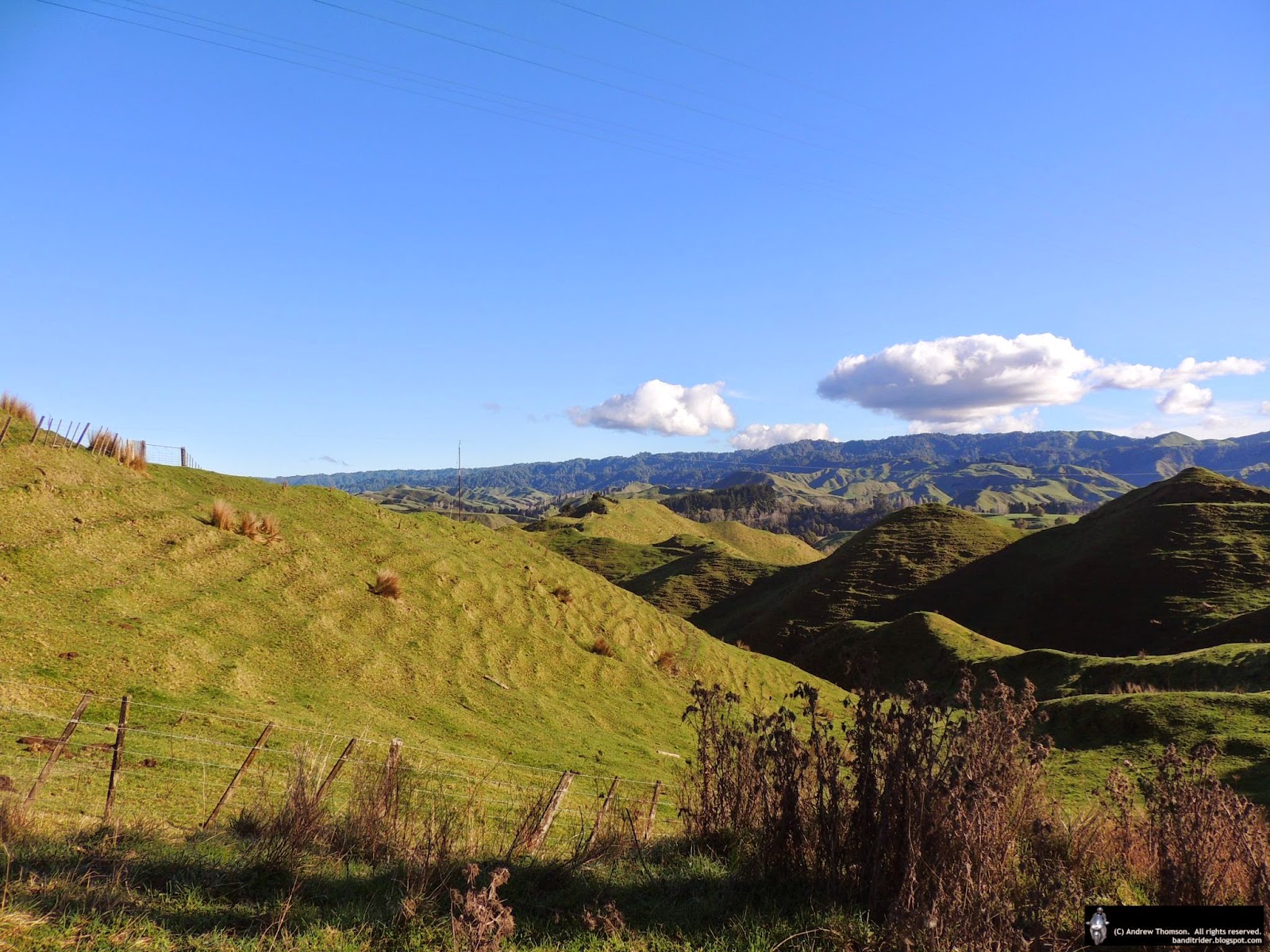 We eventually ended up on the Forgotten Highway but only sampled a small taste of it before veering off onto the gravel again.  After a bit of a fright with a cattle beast on the road we hit another tighter climb.


On the descent and just before the gravel ran out we had one last bit of excitement with the local animals when I dog ran out and had a go at both bikes.  I think we both got locked up and out of shape as we tried to avoid the suicidal mutt!  One lucky hound escaped without losing any fur.

Up the road a bit (and coincidentally at the end of the gravel) Neil pulled over and we swapped bikes again.  He reckoned that the Vee was an animal magnet and he'd had enough of dodging the wildlife...

Back in Taumarunui we stopped for gas, a drink and a bit of a debrief before the trip home.  I ended up following Neil to National Park before turning for Ohakune and Waiouru.  By Waiouru the light was fading and it was a fair way away from being warm so I just kept on heading South.

Vinegar Hill was ridden in the dark and I finally made it home by 6pm after about 11 hours and 704 magic km on the road.  The fire was one of my first priorities once the horse was put away - closely followed by a warm meal.

It might have been chilly in the morning and on the way home but really had been one fantastic day on the bike.  As I said earlier the photos can never tell the whole story or capture how the rider feels and Neil commented that "car drivers just wouldn't understand" - he is not wrong!