Early November always heralds the running of the NZDR 1KC - it's a 1,000km cruise that also happens to raise a little cash for Muscular Dystrophy - and it's also a favourite of mine.  The Connie seems to enjoy it too...

After the weather had just seemed to sort itself out a bit, it was a bit of a blow seeing a pretty rubbish forecast for the weekend.  Oh well, I was going anyway...

As per usual, the Palmy riders start early to arrive in the Hutt around when the Wellington riders are leaving.  For this sacrifice, we also get to finish in Palmy rather than Wellington while still ticking off 1,000km. 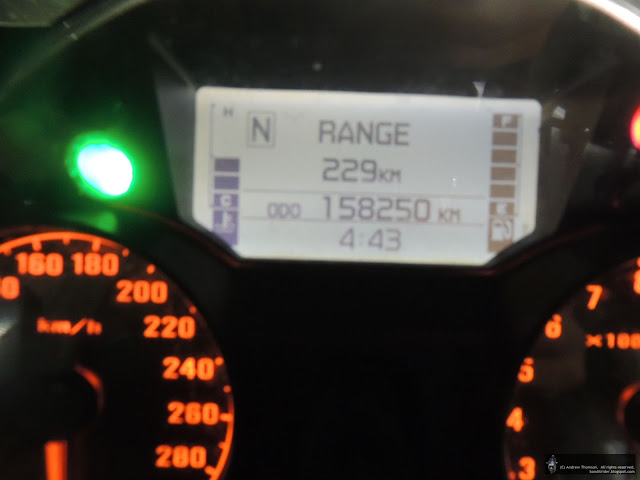 Unfortunately, James and Monie had to pull out with James' bike having a couple of leaky fork seals.  This left just one other local to join me for the ride down.  At least he had decent choice in bikes.

As both Murray and I were early and nobody else was supposed to be joining us, we got away just before five.  The was a little early morning mist around Palmy but it wasn't too bad and by the time we hit Opiki it was pretty much gone.

The trip over the Paekok Hill was fun (even if there were a few damp patches) and I warmed up quite a bit for some reason - must have been my waterproof liners and the thin sweatshirt I was wearing... 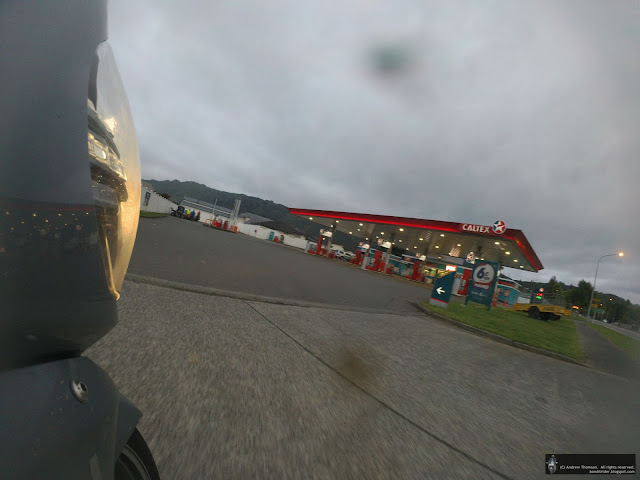 We hit the ride HQ just before 6:30 and there wasn't a lot of action going on with most of the other riders already on the road.  Murray went in to use the facilities, while I got moving again in the futile hope that I might catch up with Colin somewhere... 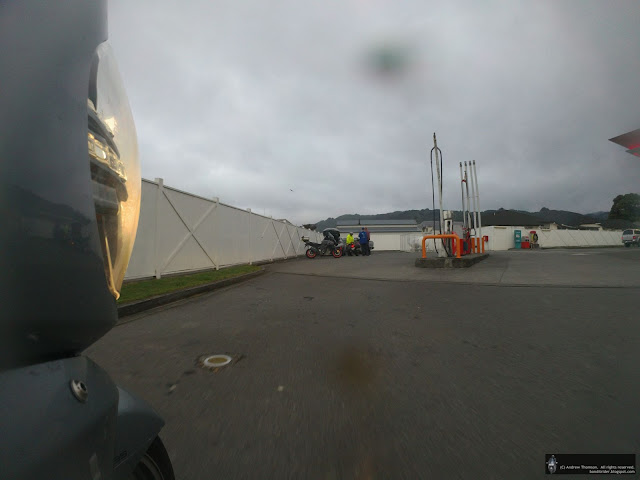 I had a pretty good run over the 'takas, only getting held up a couple of times.  It was a little windy on the Eastern side but Featherston came up pretty quickly, soon to be followed by Greytown and Carterton.

In Masterton I stopped early for gas as there wasn't much gas to be had where I was heading (Pongaroa was an expensive option) and I hadn't filled since home.  I also took the opportunity to scoff down a pie while losing my jersey and fitting my tinted visor.

As I was leaving Murray went through so I tucked in behind him for the next section to Checkpoint One, a sign outside a sheep station. 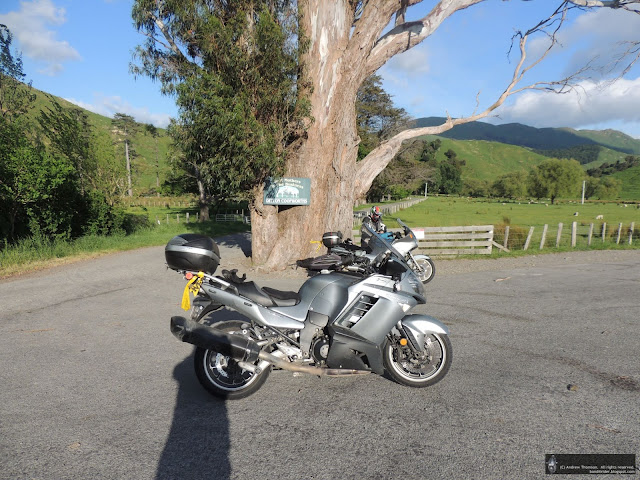 My stop was a bit quicker than Murray's so I got away before him and enjoyed a nice romp up to CP2 at Alfredton. 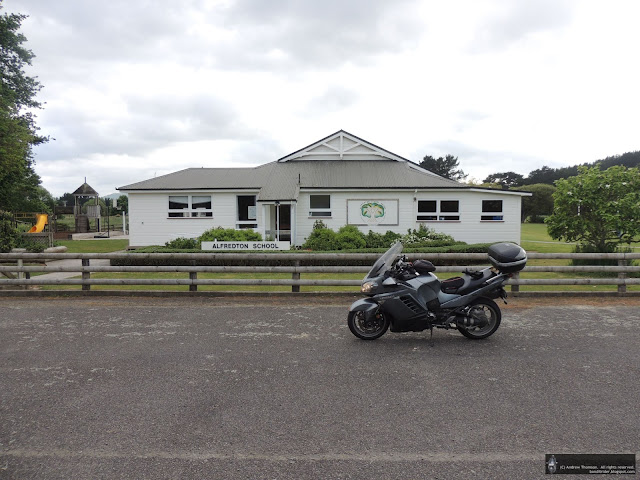 Next up was a squirt over Pa Valley Road and then up Mangaone Valley towards Pahiatua.  But, instead of riding into town we had to cross over to Pahiatua-Pongaroa Road to CP3.  It was here that I first started catching some of the other riders - my quick photo stops letting me get away from a reasonably large group of other riders. 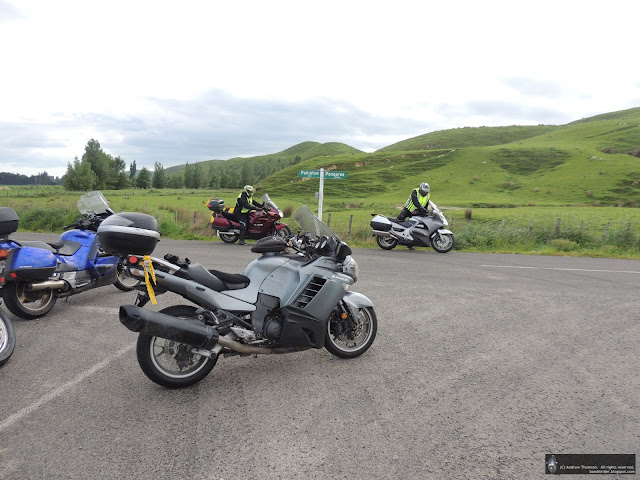 On towards Pongaroa, it was nice to be on dry roads through the Makuri Gorge and then up over the hill.  I managed to haul in another rider before Pongaroa and arrived at the checkpoint where another team were getting there CP4 photos. 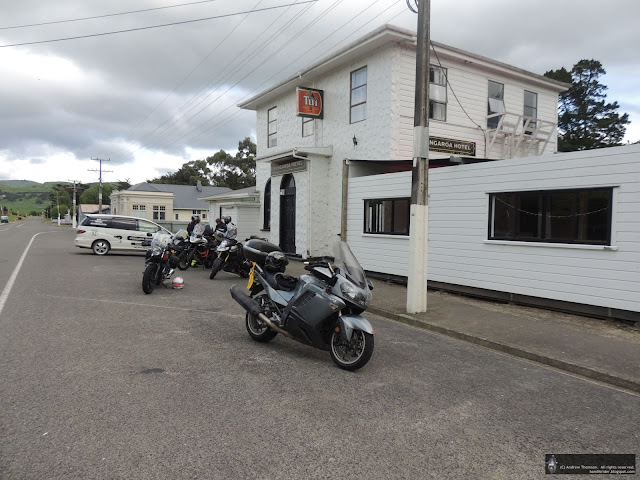 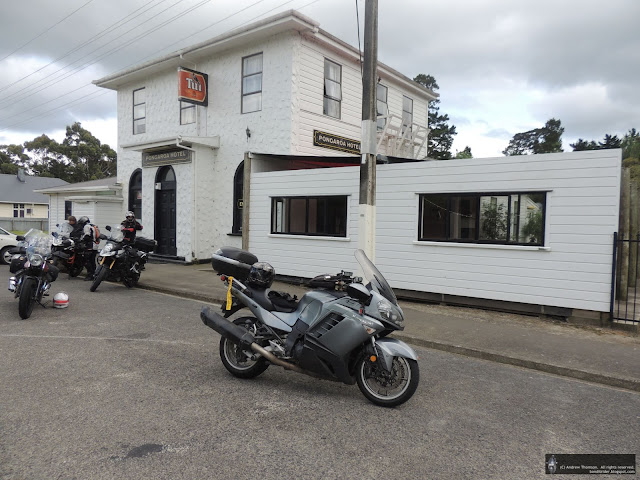 I was stopped a bit longer here as nature had been calling for a while and you can only ignore it so long.  I got away shortly after the other guys but caught them cruising, just up the road a bit.

Once again, Route 52 out to the Weber road was a lot nicer in the dry and by turning left towards Dannevirke we were going to avoid the worst section of 52 to Wimbledon.  CP5 was just on the outskirts of Dannevirke. 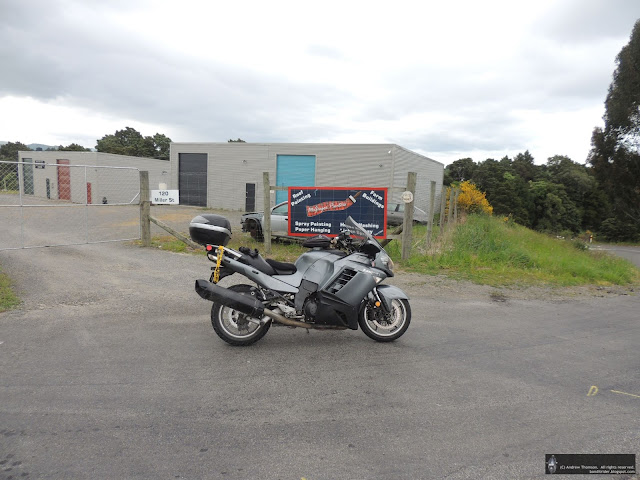 Next up was a quiet pootle down SH2 to Woodville before hitting a busy and now quite slow Saddle Road.  In Ashhurst I once again stopped early for fuel and letting the 3 other guys I'd passed out of Pongaroa sneak past me - for a while...

North of Kimbolton there was a few spits of rain and the road was even a little greasy in places.  There was also some mobile hazards coming the other way - a charity ride out of Taihape was rolling through and they had a pretty good turnout.  I even snapped a picture of Glen going past on his WR450...

From Pemberton it was off to SH1 for a while to Marton before making for the 'naki.  By now it was fairly warm (especially in Whanganui) and there was a bit more traffic to deal with.  However, the further North I rode the darker the skies got.  I eventually ran into some light rain at Stratford and the road was quite wet through to Inglewood.

Luckily it dried up not long after just as I caught John and Steve at CP7. 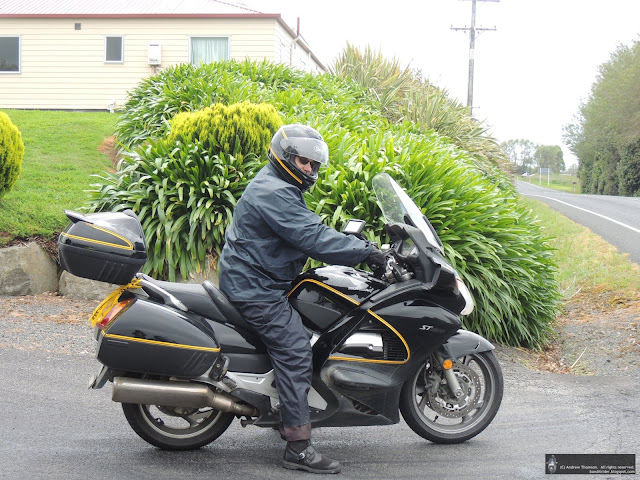 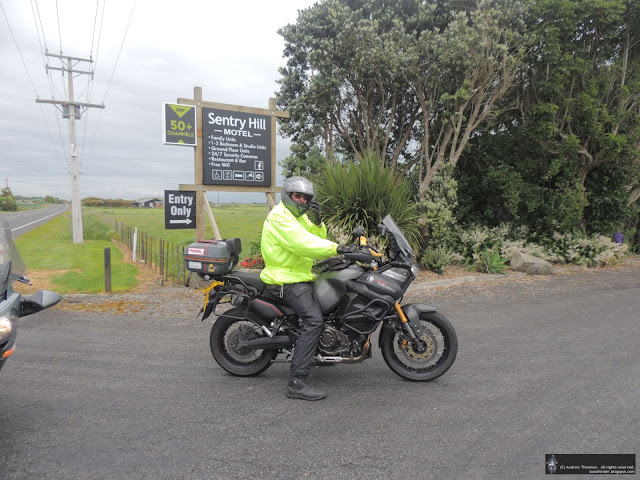 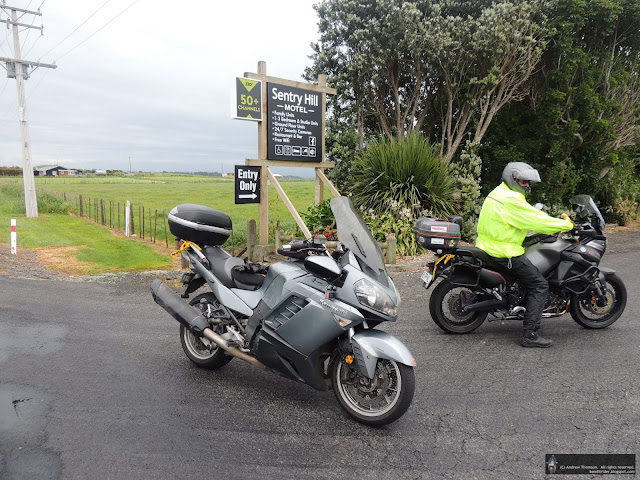 My fuel light had come on just South of Inglewood so New Plymouth was my next stop where I sorted the fuel out and answered another call.  Funnily enough, I'd got hungry along the way but by the time I stopped the worms had given up biting so I just carried on around the mountain.

At the last checkpoint I caught John and Steve again and was quicker at my stop so snuck away ahead of them for the trip home.

They caught me up fairly quickly just South of Opunake when we all caught up to a slower, unpassable driver.  It was an ever so slightly slower trip stuck behind him to Mania.

The other two pretty much sat behind me for the rest of the trip South (through an even hotter Whanganui) until Sanson where they turned off onto SH1 for their trip back to Wellywood.  Quarter of an hour later and I was home having a cold drink and finally something to eat. 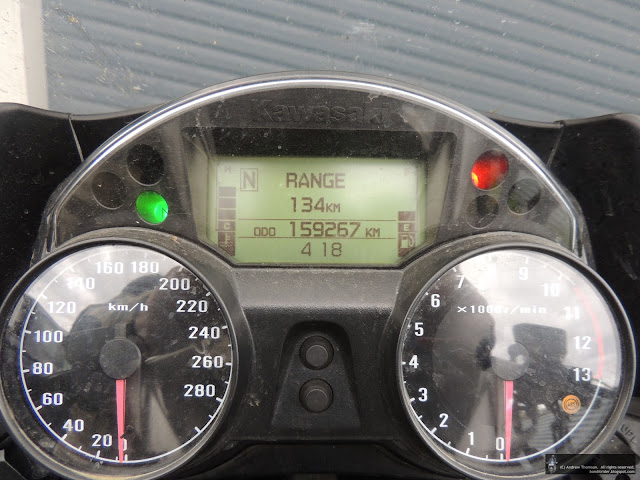 Another great day out on the old girl and a reasonably good time for my 1,030km.  Even better that the forecasted thunderstorms waited until Sunday to hit - good stuff!