I set the alarm on Friday night for 4am but in the end did the usual pre-ride trick of waking up before it went off. So I was up at 3:50 making a coffee and organising things. By 4:30 I was out the door and around at Brian's making sure he was up a 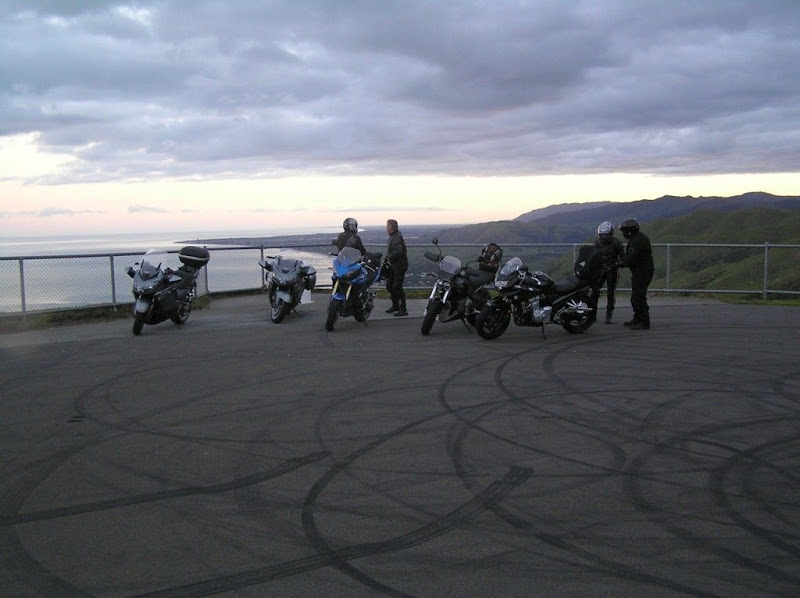 nd at 'em then it was a short ride to Shell Pioneer to pick up Michelle & Al. We only just beat them there and as soon as Al had swallowed a pie we were off into a rather cold morning - grips on 75% and screen up.
Had quite a nice little blast down to Shannon where we picked up Colin (without even stopping) and continued on south. A quick stop for piccys at the look out on the Paekakariki road and then on to the Hutt on damp and slippery roads.
Gassed up, purchased me badge, yarned with a few 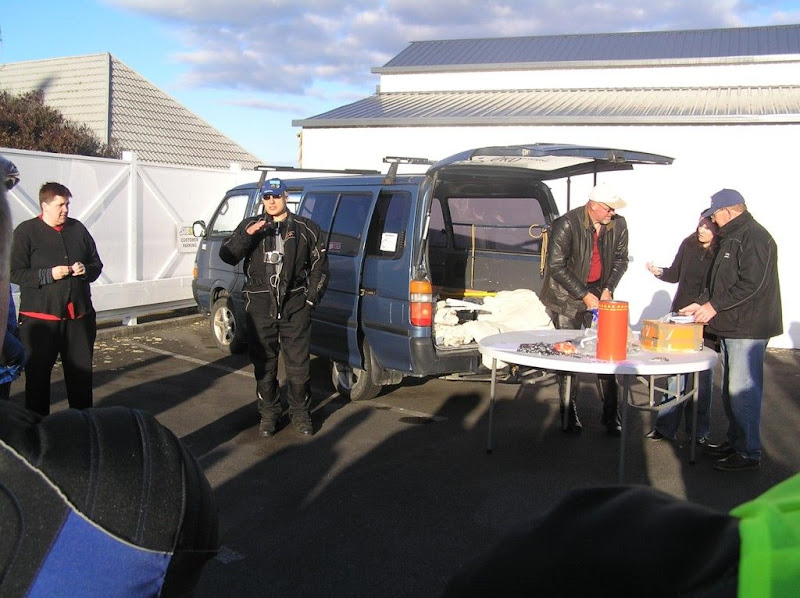 others and soon it was time for John's wee briefing before we finally hit the road. Brian even won a hat in the prize draw. Also good to see Steve in his leathers all set for the ride.
At about 7:15 the hordes departed and headed up the Rimatakas. Most people were very well behaved and were taking it quietly so Brian & I made our way through the pack until we caught up with some mates of Dad. We followed them through cold rain through to Masterton and then onto Mauriceville. I'd never been through here and it was quite a nice ride through pretty country - especially as the weather was now playing ball and the day was starting to turn into a right ripper.
I passed Dad's mates heading through to Mangamire as I knew they were concerned about some of the turns in the Pohangina Valley so thought I'd lead them through it. Somewhere through here Al turned up as well and it was quite a procession heading over the track and onto Ashhurst. Turning off at Ashhurst to head up into the valley we lost Dad's mates and Al - stopping for gas I 'spose. So it was just Brian and I until Hitcher tucked in behind. We had a great ride through the valley, onto Rangiwahia and then the main drag to Waiouru. Had a close one north of Mangaweka when a cop came around the corner and we were doing a reasonable pace - phew! Hitcher pulled off at Taihape for a feed and we kept on trucking to Waiouru. 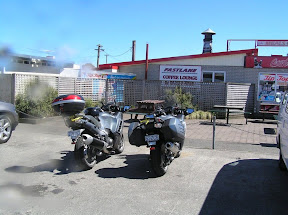 At Waiouru I opened my topbox to a disaster - my water bottle had exploded and all my gear was soaked in about 800mls of water. Wet weather gear, puncture repair kit, camera bag (note water on lens in piccy) and...the route instructions. I tipped the water out and put my jersey in the bottom to soak up the remainder. The camera still worked and went into my jacket pocket for the rest of the trip. Fuel and a feed and we were just getting ready to leave when Hitcher turned up, so it was 3 bikes again heading off towards Ohakune keeping our eyes peeled for the Fields Track turn-off.
Fields track was in pretty good condition (it can be quite shocking) and we only saw 5 other vehicles for it's entire length. Popping out onto highway 4 and on the first bridge we came across I had to get out of the way of a van coming the other way on my side of the road - tosser! Keeping a close eye out for more vans we pottered up the highway and made our only major navigational error. At National Park we were supposed to turn-off onto 47 to Tokaanu before taking 41 back to Tamarunui. Brian & I both knew that Tamarunui was on the route but had forgotten the little detour - and no route instructions, doh! I wondered why Hitcher had turned off...
N 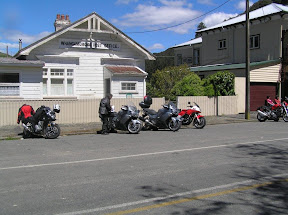 o stopping at Tamarunui, we hit the Forgotten Highway and were soon into it's delicious corners and dodgy surfaces. Had a nice run through to Whangamomona where we stopped for a cold drink - all those corners and the wee bit of gravel made for thirsty work. We weren't the only one's there - bikers from all over had the same idea as us. After our drink we headed off into Stratford and stopped again in Eltham for our last fill up.
Leaving Eltham we followed some notes I'd made the night before (the only one's as I had thought that I knew everywhere else we had to go - double-doh!) as we were to take in some back roads to bypass Hawera (good idea that). In the end we only had to do one quick U-turn and it was quite a nice ride through this new to us roads.
By now we'd done over 800km for the day and were starting to feel it so we took it pretty easy through Wanganui, Marton & Halcombe before finally making it home at about 5:45pm. A pretty long day but a great ride all the same.
And now for the news that really put a downer on the ride: sadly one of the riders had an off on the Forgotten Highway and passed away. I only heard of this this afternoon and it definitely wasn't nice to hear it - I had spoken to the rider earlier in the day and he had been fizzing in anticipation of a great ride. A terrible incident to marr a great day and my condolences to his partner & family.
More pictures here.
Posted by Andrew Thomson at 4:43 pm