Another not so bad day yesterday and an invite by Owl & Sarge to join them in a ride up to the Bay couldn't be passed up so I hurriedly got myself sorted and fired up the Connie.
I met up with Owl on the way out of town and we left Palmy in some light drizzle hoping for better weather further up the road. Luckily we were soon out of the rain and into the gorge where the road was pretty dry and little traffic...
In Danniverke we met up with Sarge and followed him on up through Makotuku, Ormonville, Takapau and Waipuk. In Waipawa we turned off and had a great run through to Patangata where Robertydog and his delicious R1 was waiting for us. 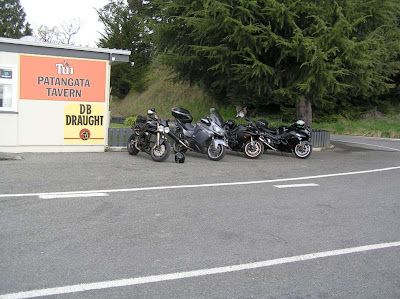 While waiting for our lunch (great burgers) we were joined by another Hawkes Bay couple who ridden down on their sweet black VTR. Burgers scoffed we were once again back on the road and Middle Road was superb!
In Havelock North I said good-bye to the others and shot across to Napier to catch up with the olds.
The old man decided to join me for part of my ride home but while we were getting ready to leave I noticed that my top box was not latching down onto it's mount. We tried plenty of CRC and a lot of poking and prodding but could not get the latch to pop out far enough to catch on it's lug - bummer! We managed to lash it down pretty securely to the bike and the old man followed me up the road to make sure that it wasn't going to go flying off (I noticed he did sit a fair way back behind me at times - didn't trust his own bungies eh?)
Just out of Fern Hill a light rain started falling on us and by the time we were just South of Hastings it was bucketing down. Luckily the rain did not last and the sun even had another go at burning through the clouds - the roads however, remained wet for all the fun parts of SH50...
At Onga the old man turned off to turn his little ride into a loop while I continued on my way home via SH2 and a quick fuel stop in Danniverke. Another nice little ride done and it seems that the weather is slowly on the improve so hopefully I'll get a few longer rides in before the GC - it's less than 2 months away now...Oh, and I have to get that top box sorted too :(
View Middle Road/SH 50 Loop in a larger map
More pics here.
Posted by Andrew Thomson at 7:26 pm