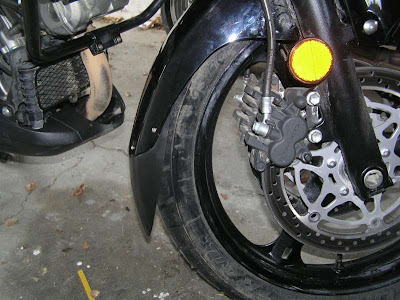 I've ignored the warnings and the fever has set in - today I added two more farkles to the V-Strom:

First up it was a fender extender. On my last off-road excursion the front tyre did a fantastic job of dumping mud all over the oil cooler and I figured that this was less than ideal. The fender extender was a simple mod as the front guard didn't even need to be removed - although I did undo the bolts on it so that I could move it around a bit and stop some idiot with a power tool from drilling through the guard into the tyre. Since I took the picture I found some black touch-up paint and the screws are now a bit less visible.
The second farkle was a little more frivolous, a bags connection tank bag. I really like the little glove-box on the Connie for firing little bits and pieces in and after seeing this bag on the Twisted Throttle website I decided that it would do the job for me on the DL. What attracted me to the idea was the method of attaching it to the bike - via a fitting on the gas cap. This keeps the bag from rubbing on the tank and scratching paint etc and makes for very secure fitting.
Once again fitting was pretty simple and the mount came with a good selection off different length bolts to screw it to the tank - a good thing too because after removing the four original bolts from the gas cap ring I discovered that there were three different length ones! After installing the tank mount I sat the bag on it to work out the ideal position for it and then drilled holes in the bag's base to attach the quick release top-ring. And that was about it - now I have a nice looking little tank-bag for my odds and sods. 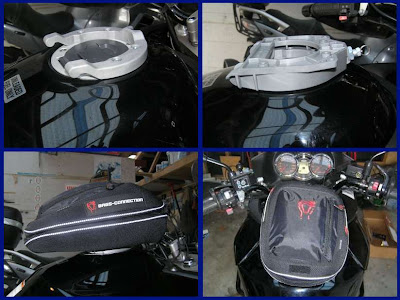 Posted by Andrew Thomson at 4:01 pm