Day Two of our King Country adventure started with an early rise, breakfast at the local gas station and then meeting everyone at Neil's place for our pre-ride briefing.  Luckily overnight the wind had come up and this probably helped keep the frost at bay.  It did however, have a bit of a bite to it so everyone was wearing plenty of layers and those with heated grips were thumbing there noses at those who didn't.

As per the plan we were on the road by 8:30 and had a quick squirt up the road before turning West at Raurimu to take in our first gravel of the day.  Initially the road had a pretty liberal covering of gravel so I had to grapple with the big DL a fait bit until we got onto some nicer stuff.  And we definitely found some as the road opened up near Kaiteiki - speeds were up and the dust was flying.

Before dropping back down to the main road again there was a great little hill to climb with a pretty good surface and I had great fun chasing a DR-Z up the hill.  On the gas out of the corners I was getting the rear end loose a bit and there was gravel firing out at anyone snapping at my heels.  Great fun but when the DL hooks up she hooks up so there was definitely the odd bit of excitement.  Somewhere in all this excitement the last bar of my fuel gauge started flashing...

After a couple of km of SH4 we turned right onto Whakapapa Road which quickly turned from tarmac into some more nice gravel but after checking my mirrors I noticed that there was nobody following so I slowed up and eventually stopped to turn around.  Arriving back at the road the two guys waiting there surmised that the crew may have stopped to help a horse that was lying belly up on the side of the road - I never found out for sure what the story was - maybe Neil will comment...

It was here (after about 15km of my fuel gauge yelling at me) that I decided that the best idea for me was to flag Whakapapa Road and whatever other gravel delights Neil was taking the crew down and run for gas in Taumarunui 20km up the road and meet the guys there.  So 20km of boring old SH4 tar for me...

After fuelling up and locating the other guys (different gas station with more expensive fuel) we headed out of town on Ongarue Back Road.  This tuned out to be pretty good gravel and although we had a few spits of rain and a hold-up for some stock crossing the road it was a neat little ride that spat us out onto Ongarue-Waimiha Road.  The last time I'd been on this road was on the Connie in middle of the night so riding it in daylight on the DL was quite nice although there was a few damp sections which meant you had to keep your wits about you.

Puttering through Bennydale and up the road a bit we eventually turned off onto what I reckon was the best bit of gravel of the day.  Mangaokewa road was very hard and fast with just the odd bit of soft stuff in places.  The Dl was in her element!  I could not resist carefully passing most of the other bikes and attaching myself to the back of Neil's Beemer.  The only issue on this road was having to avoid a few cattle who had found some greener grass outside of their paddocks.  It was fabulous being able to hook top gear and roll on the gas!

When we finally ran out of gravel we took Kopaki Road back over to SH4.  But just for a while, we soon turned off onto Tikitiki and then Kahuwera Roads which both offered good gravel that eventually led us into Piopio for lunch.

After a nice lunch we rode South on SH3 until the turn-off at Paekaka Road which was gravel from the get-go.  It and the next road (Kaitaringa Road) had been pretty freshly graded and felt like marbles underneath me - not quite as much fun as Mangaokewa road!

Eventually though the roads got a lot better and there were some nice fast sections as we made our way through to Ohura (didn't actually go into the ghost town that Ohura is) and then turned to head back towards Taumarunui.  We rode a heap of other fantastic gravel through here which took us through some really nice country and included some fast gravel along with some tighter hill climbs and descents.  All in all some fantastic back country riding.

Back in Taumarunui it was time for fuel and to say goodbye to any more gravel as we headed back to National Park.  Here I picked up my bag and climbed into my rain suit for a bit of extra warmth and turned for home.  I had a pretty good trip back home and although it was chilly I enjoyed the ride and was home well before 7pm.  What a fantastic weekend!  Thanks guys! 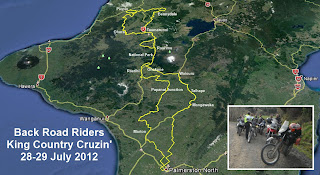 More pics here and video to come.
Posted by Andrew Thomson at 9:29 pm