Okay, I've finally come down from orbit after yesterday.  Well, not quite but yesterday the DL went in to get it's pesky leaky fork seal sorted and I was forced to borrow the bike below for the 5km journey to work.  I was late, so possibly it was the right choice...

For those who perhaps aren't up to date with their sports bikes, this is Suzuki's flagship sport bike and I can confirm that is indeed a rocket!

The guys had the bike warming up out on the road while I geared up and climbed on (or perhaps into).  Somewhat surprisingly I found everything to be in the right place so I felt that the ergonomics were not too bad.  Of course, it is a sporty riding position and it feels a little like your bum is higher than your wrists (which are somewhere down by the front axle).  The seat was the usual sports bike plank but this was not going to be a problem for me on my commute.

Snicking it into first gear and pulling away I noticed a relatively tall first gear but the bike not only makes around 180hp but also plenty of torque.  In town the change from first to second is basically at the speed limit but I discovered that you could also then go up into third and the bike did not mind burbling along with somewhere around 3,000 revs on the dial.  Down changes took me a few goes to get the hang of but this was just due to the gear lever position.

Funnily enough, every other vehicle on the road was going far too slow and I definitely had to watch my speed.  Any twitch of the throttle and the bike was off - the thing just wants to go!  Later on my way back to return the bike I did a brief excursion out onto a short stretch of open road and managed to stretch the bikes legs ever so slightly.  Actually, I probably didn't even get into the bike's mid-range as I gave it a squirt in 3rd to get past some cars.  Suffice it to say I reached somewhere around the speed limit in a blink of the eye before needing to change gear...Then I settled down for the pootle back through town.

I can't really comment on the handling as riding around town is not going to test the handling of a sports bike.  Obviously the narrower bars mean that a bit more rider effort is required but then this is just another thing that makes riding a sports bike rewarding. 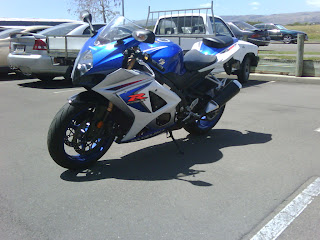 So would I ever own one?  Well, as much as the engine performance is addictive, the bike just has so much more potential than I'd ever be able to use or in other words more than enough potential to get me into trouble.  Perhaps the 600 would be a better safer bet...
Posted by Andrew Thomson at 8:05 pm