BRR Why, why, why, Wairarapa

(Neil does come up with some good names for our rides occasionally).

Yes, Sunday was our monthly Back Road Riders ride and boy did we pick a good day for it!  I left home just after 8am and it was a little nippy with the good old hot-grips getting a bit of use as I headed up the Pahiatua track.  I was too early as usual so I had time to stop for a couple of pics at the top. 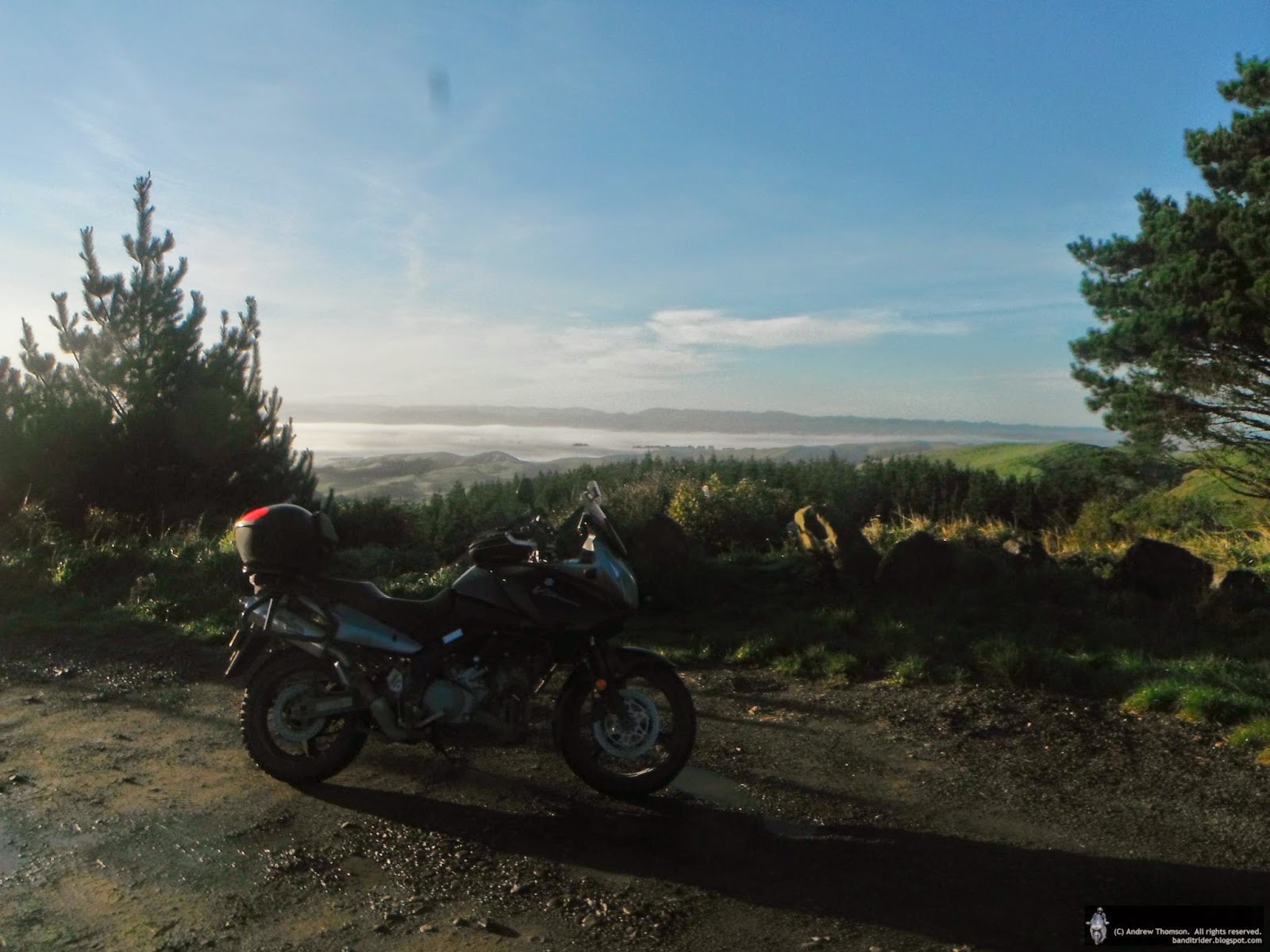 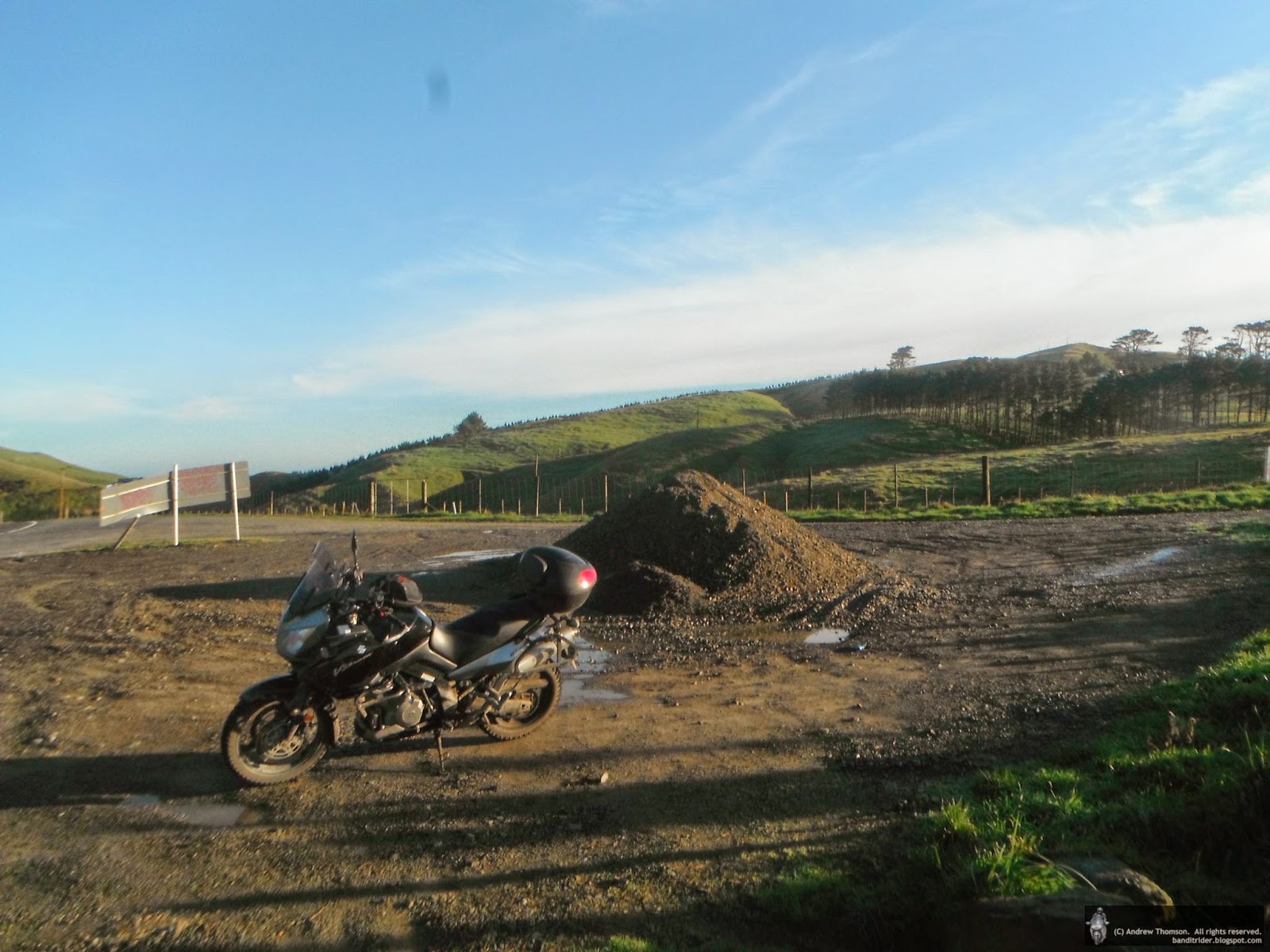 As you might be able to tell from the pics, the weather was gorgeous over the Palmy side of the hill but as soon as I dropped down the other side and started to make my way towards Mangamire I disappeared into the fog.  At first it wasn't too bad but after a while my visor had fog on the inside of the visor so I had to stop and clean it just before Mangamire.  At the rail crossing I had to hold my breath as I crossed the lines - there was no way I was gonna see a train coming until it was on top of me - well, I'm still kicking...

I was about the second bike (we'll ignore the guys getting gas at the servo) to roll up at our meeting point in Eketahuna with just Neville (new to our merry band) on a brand spanking Tiger.  Pretty soon the rest of the guys started rolling in - including Colin who had gone missing last weekend, he must have found his way back from Castlepoint... 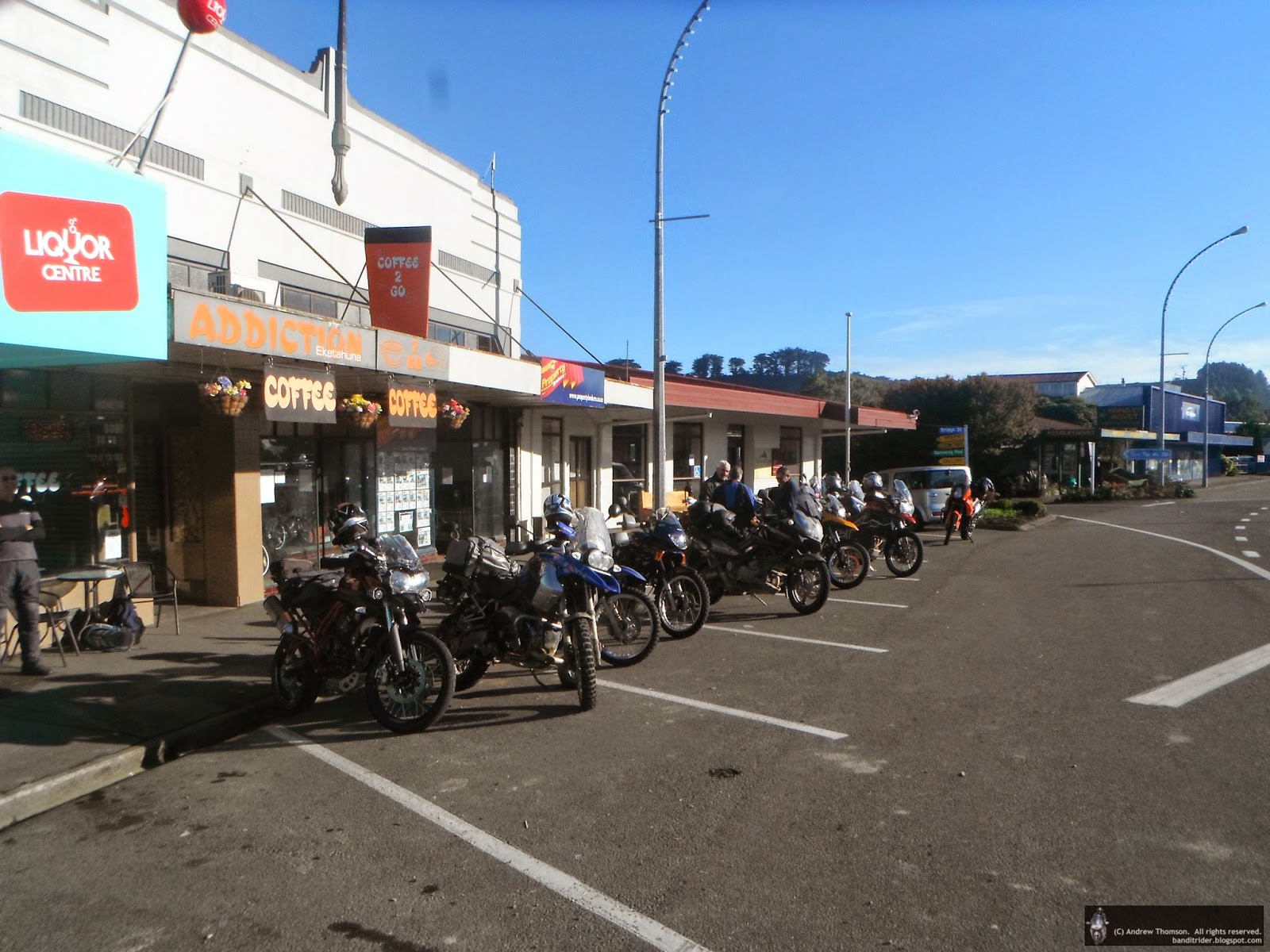 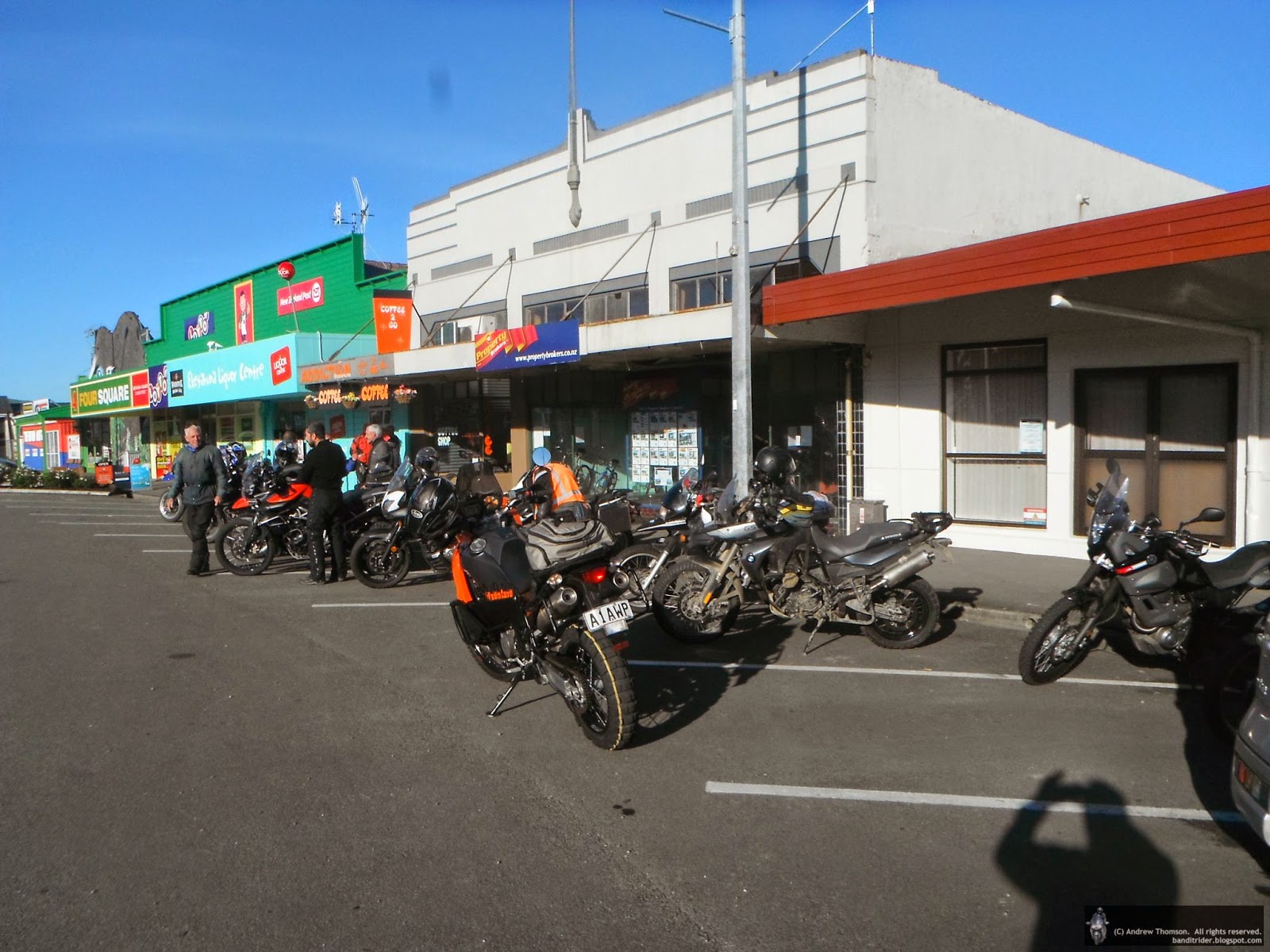 After our usual mucking around it was time to hit the road for a short 100km to Martinborough by way of some decent gravel roads.  The first bit of Mangaoranga Road was how I remembered it - fast and open and a lot of fun.


Further on, I think it was on Wairiri Road the gravel got a bit more unfriendly being reasonable fresh and covered in marbles.  This slowed us all down a bit and we stopped at the top of a nice hill for a regroup where myself and a few others all "aired-down" for a bit more grip. 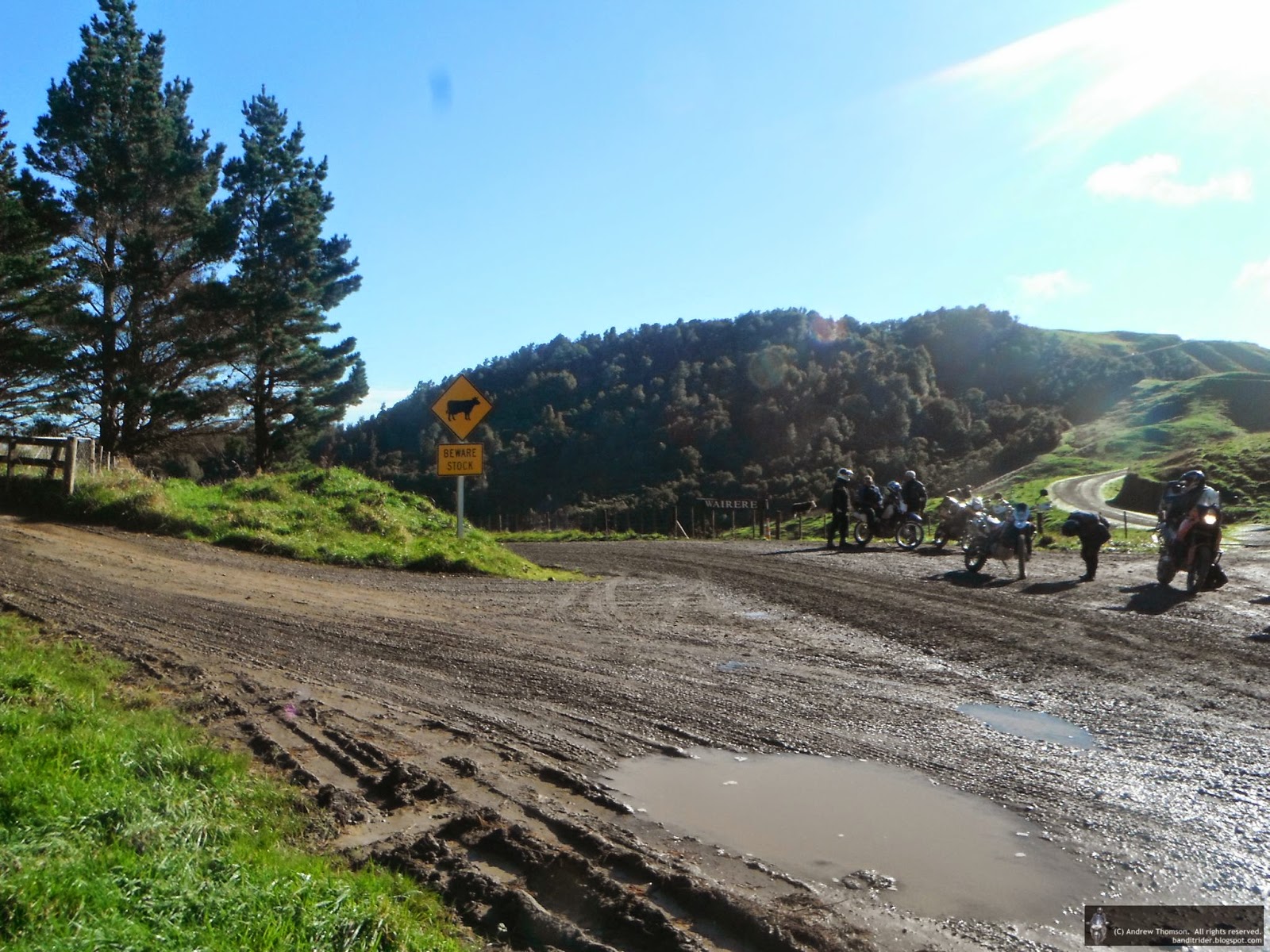 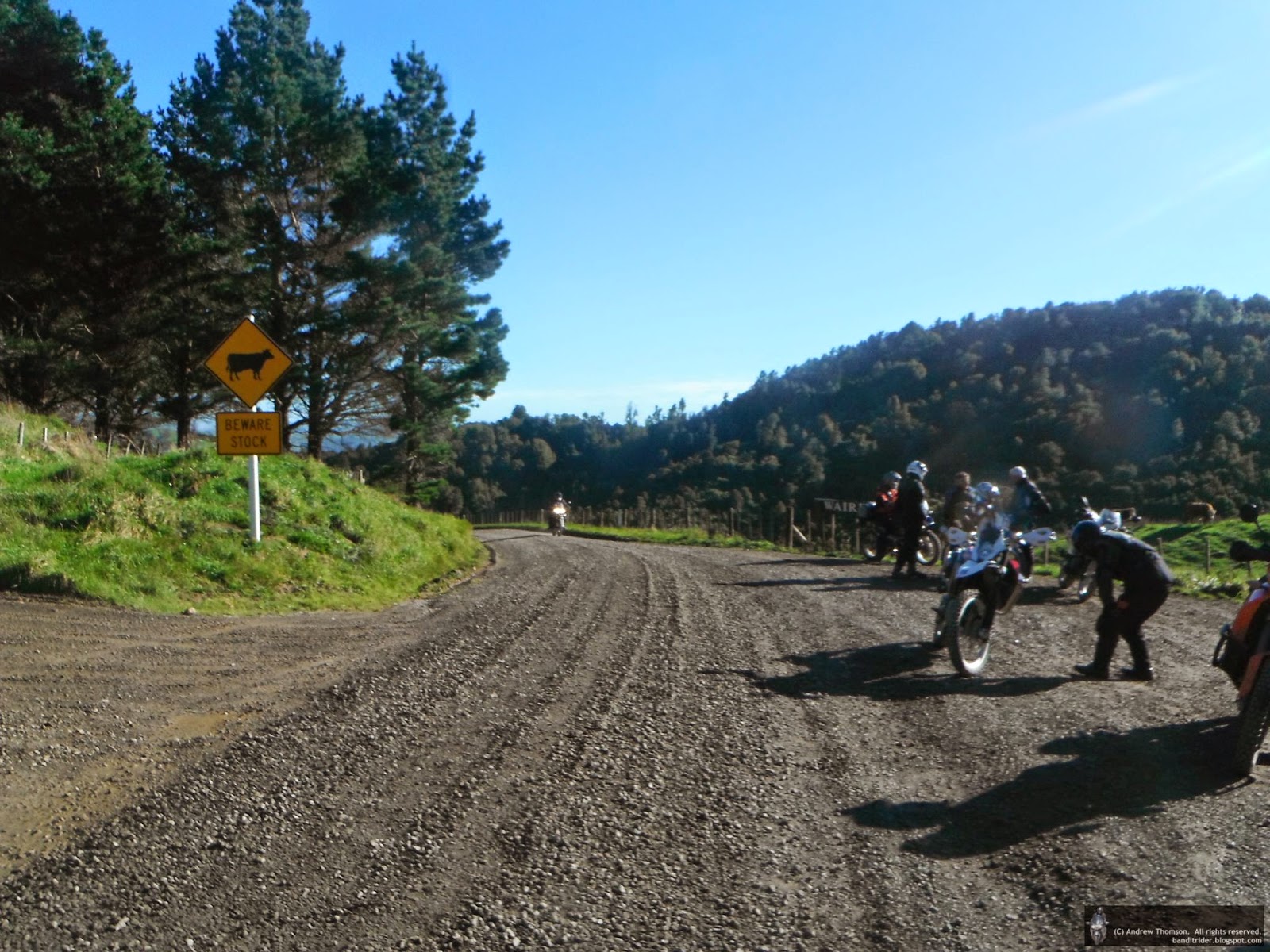 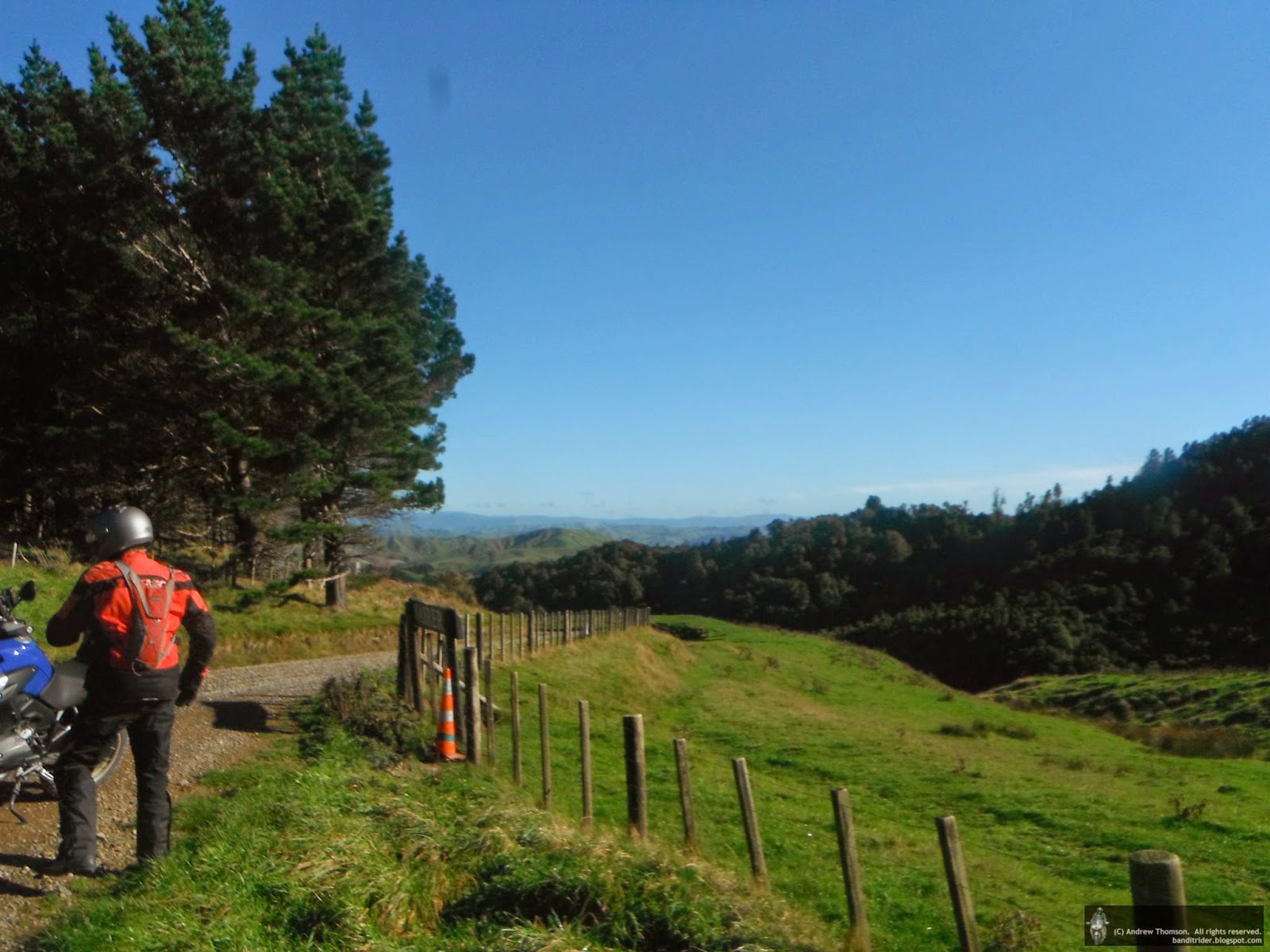 Dropping down the hill the road got a bit better and faster and we all had a bit of fun on the last bit of gravel before taking sealed roads through to Martinborough where we parked up for an early lunch. 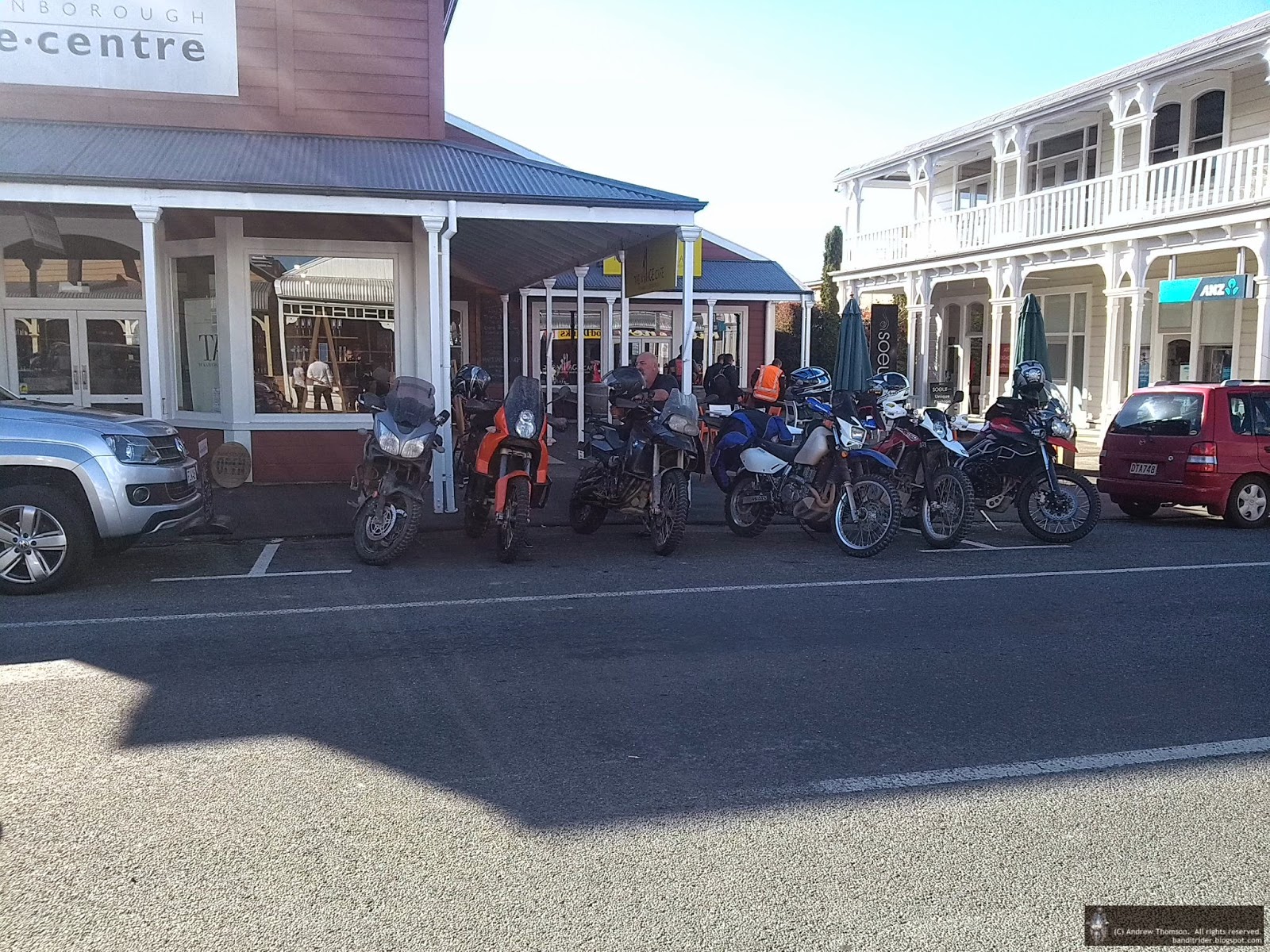 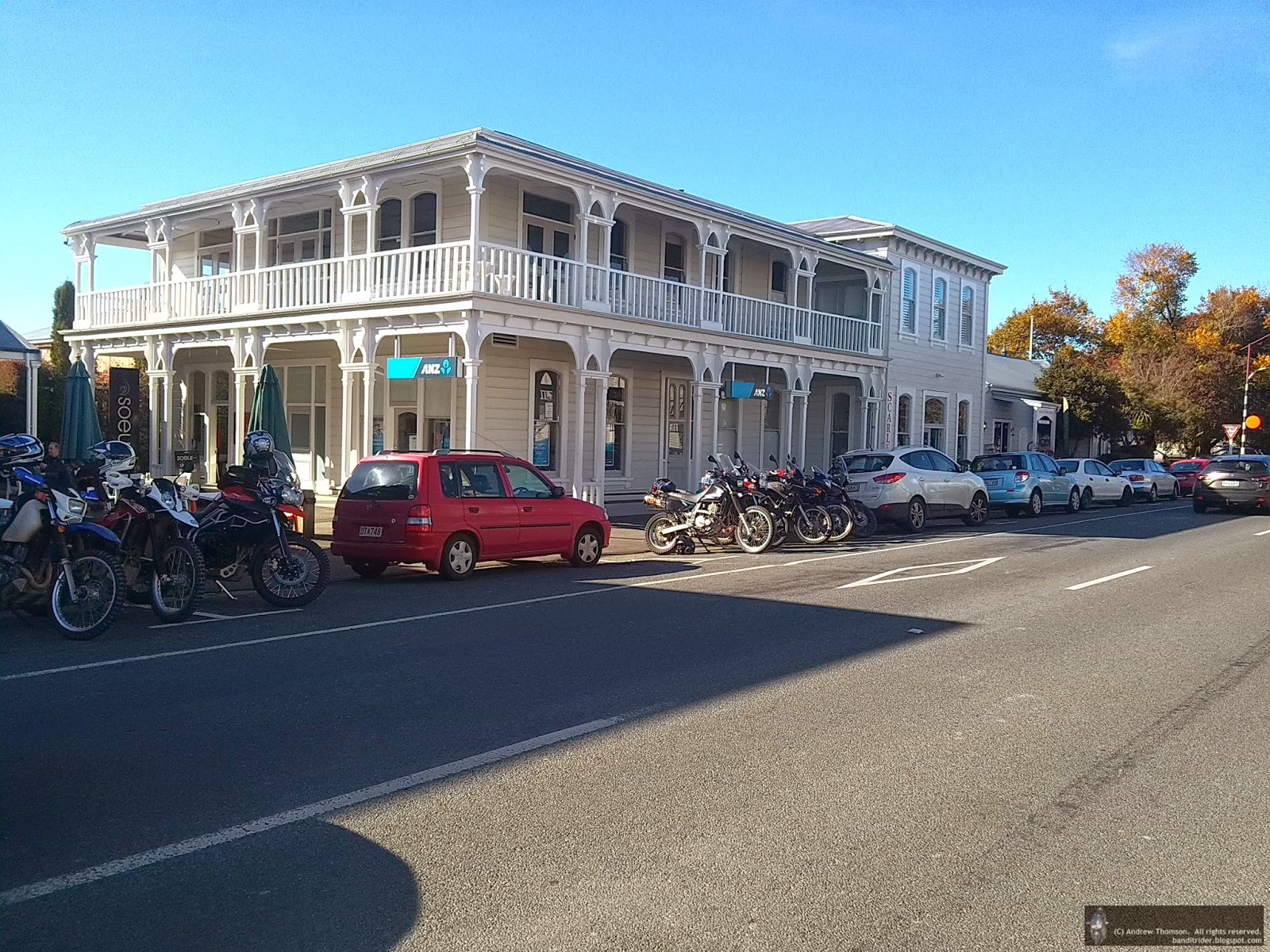 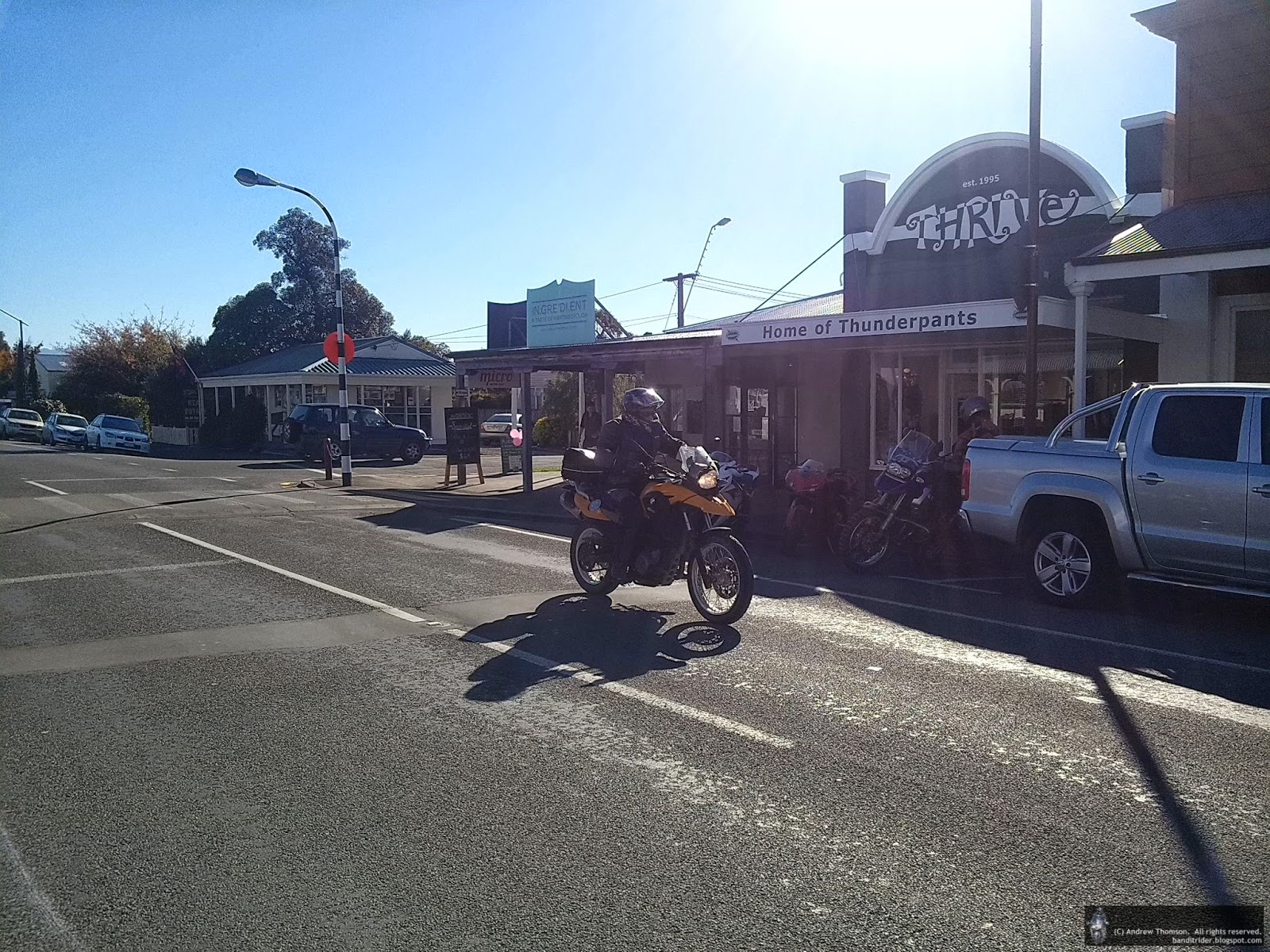 After lunch things were only to get even better.  After a squirt on seal out to Hinakura we turned off onto some gravel which eventually got us onto the spectacular Wainuiru Road.  This took us on a nice climb up a hill that offered up some truly beautiful views.  If you watch only one of the videos, make it this one!


Next up was some more seal out to Te Wharau where we turned off onto Kaiwhata Road which was to take us through almost to Riversdale.  We've been through here before and the first bit is some reasonably tight stuff through a forestry block but once you drop back down the hill and onto Homewood road things really open up onto some of the fastest gravel I've ridden.  It's a real hoot and great to look in the mirrors and see the dust cloud the bike is kicking up - yes, the Vee was in it's element!

We then took seal through to Tinui before hitting our last bit of gravel through to Alfredton.  This was a little bit of a mission as there was the odd marble through there and the low sun shining through a dusty visor didn't help a lot.

At Alfredton we all headed off in different directions to make for home.  I led a few of us through to Pahiatua and then back over the track.  We had a bit of a play and it was a pretty good way to finish off our day.  our next ride is only a couple of weeks away and it's something special so I can't wait... 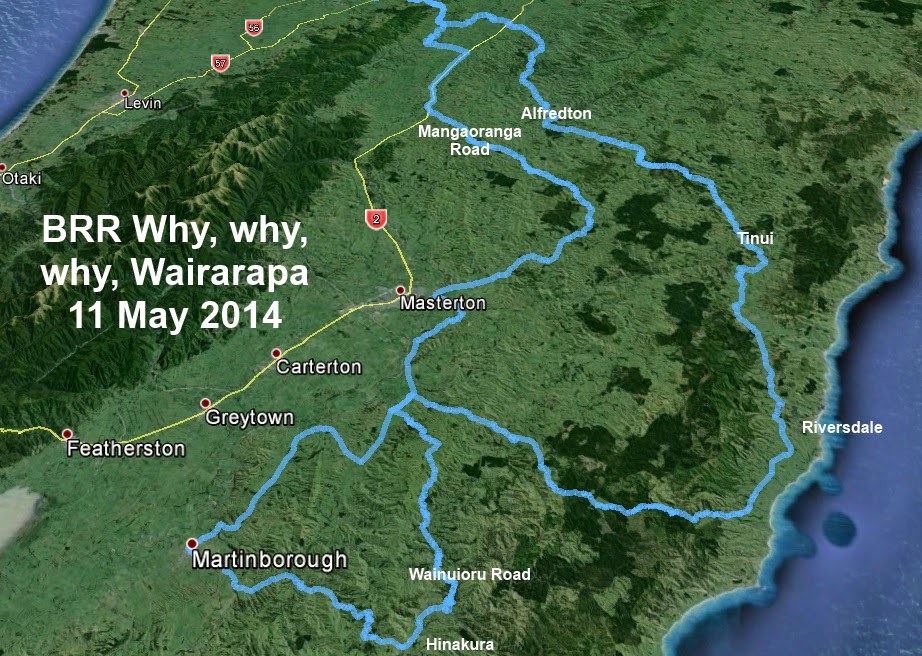