Up above the world so high

Sunday was another pretty nice winter's day - blue skies, sunny and fairly calm - so I needed to get out and try the new levers on the Tenere (well, that's one excuse).

At about lunchtime I was driving (in car, navigator on the back seat) back from Feilding and had a good view of the ranges so my thoughts turned to the options available to me.  I decided against North Range Road as I would imagine that the puddles were lakes after all the rain we've had and I didn't want to dunk the Tenere like I did the Vee...


So, instead I decided to clamber up Whariti again and see if there was any snow left up there - Ian from work had been up there a couple of weeks ago after a pretty good dumping.

With the gorge shut (and possibly for good!) the Saddle Road is pretty much the main route across to the Hawkes Bay while the Pahiatua Track is the choice for those heading down towards the Wairarapa.  This means a lot more traffic on two of my favourite roads.  I decided to do do both of them starting with the Track.

Going over the track also meant that I could have a little gravel warm-up on Tararua Road (I somehow seem to always take this road on the S10) before scooting through Ballance to Woodville.  Tararua Road was a blast and I think that maybe I like this direction better than the return from the Pahiatua side which I seem to have done more often.

And then it was time to clamber up the hill.  I found the road to be in pretty good condition - last time I went up there I reckon there was more ruts and definitely a bit more slippery exposed clay.  Just the one vehicle to pass too:


And hey, presto I was up on top of the world again. 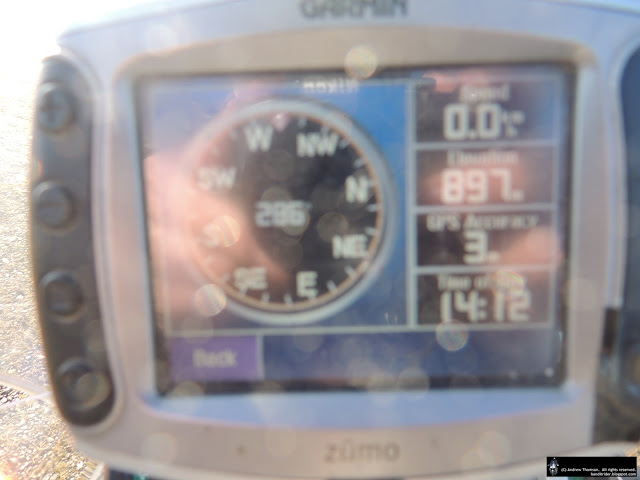 The trip down was a lot slower.  I was worried about two things: that car I'd passed earlier and the ABS playing up on the rutted stuff (so far it's only done this once and that was coming down off Whariti).  As it happened I never saw the car - they must have given up - and the ABS behaved itself.

Next up was the ride over the Saddle to Ashhurst.  There was some traffic in places and also plenty of road works and crap on the road to avoid.


In Ashhurst I stopped to hassle visit one of the locals before finally puttering my way home.  Just a short ride of around 100km but a nice way to kill a couple of hours on a lovely winter's day!

Posted by Andrew Thomson at 8:06 pm