So apparently the silly season is upon us and everyone is supposedly under pressure, tired out and in need of a break.  Meanwhile our road toll has already exceeded last year's tally and the remedy is speeding fines for 5km/h over the limit - the same solution as every holiday period for the last few years (thanks Australia).

Anyway, there must have been something weird happening in Palmy yesterday as I witnessed 1 near miss, got myself wrapped up in another and came across two separate accidents...Our populations is supposedly around 84,000 (when the scarfies are in town I 'spose).  Not a bad effort for one day's work, but these are only the ones I saw...

Near miss number 1.  4WD fails to give way to a motorcycle (not me) on the big roundabout just up the road to me.  I got a good view of this and the poor rider must have messed his jacks when a dirty great SUV appeared next to him.  But then, the 4WD must have been in a hurry to just nip around to the left and go blasting up a short dead-end street.  Dramatic re-creation below... 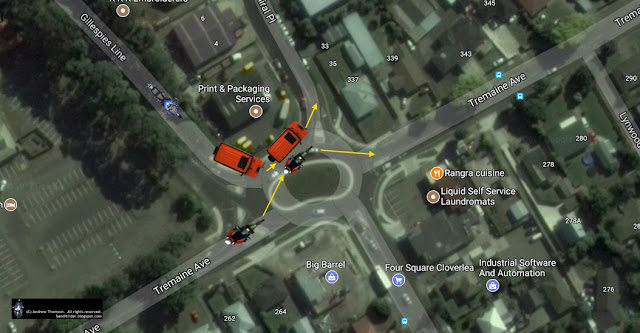 Next up, it was my turn to enter the chaos of the roundabout.  Mine was nowhere near as serious as I was never going to ride the poor old Tenere into the side of a truck that decided to not give way to me.  I did however come to a complete stop in the middle of the roundabout. 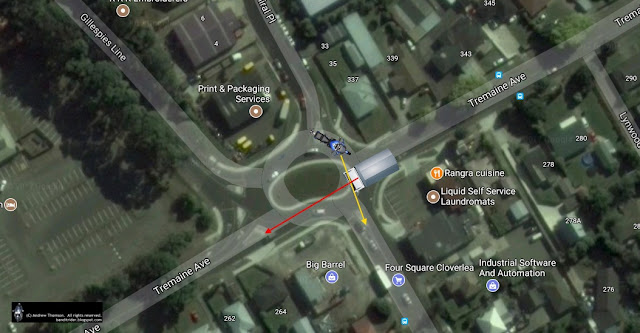 Two near misses in less than a minute so now it was time to see what happens when a near miss turns into an event - and this one looked pretty nasty, I hope nobody was injured.

I was held up majorly (along with hundreds of others) by an accident on Fitz Ave which is a major road coming into town.  At an (intersection controlled by lights), two cars had come together with quite a whack - the front wheel, axle and suspension had been torn from one of the cars and neither will probably ever turn a wheel again.  This is a 50km/h zone.

At work, a number of my team were held up by the accident and it was a good topic for our safety moment.  I was able to add in my other earlier adventures...Lots of head shaking all around...

Just after 5pm I was in my car (swapped vehicles, dog in the back) and making my way to the old's when I got held up by the next accident.  This time around a bus had taken on a car.  To me it looked like the bus had decided to turn out into the traffic (busy road, 2 lanes each way) and managed to tag some poor unfortunate.  People everywhere, chaos etc etc.

Well, I'm not an expert but I don't see speed as being a factor in any of these near misses/accidents.  Maybe one of the cars in accident #1 was getting along but far more likely was that someone was running an orange/red.

What I reckon was the cause of all of them was silliness and I don't think you can use the time of year as an excuse.  In each case someone decided to ignore road rules or to make a risky decision.

ACC have taken a lot of stick about the ridiculous cost of bike registrations (plenty from me for sure - it costs me over a grand a year for 2 bikes) but they have been putting some money into subsidised rider training and then there's Geoff and his mates also offering good training to bike riders.  Advanced driver training courses are available but they are never even mentioned when the police are talking about road safety and I don't think there's any such thing as subsidised driver training...

But, unfortunately driver/rider training is probably only taken up by sensible people - the idiots out there are far too good to need it.  If only the cops could get silliness detectors for their cars...

Anyway, not the most eloquent rant and I certainly don't have all the ideas to fix stupid but please be careful out there, no silly behaviour, watch out the other loonies, have fun and take care over this silly season!

Posted by Andrew Thomson at 9:09 pm