The Boys From Work 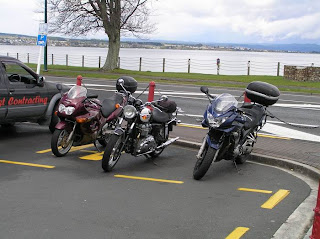 Got out for a ride with the boys from work last week. We had been talking about it for awhile and had a day planned that suited us all. But the weather was doing it's best to interfere. A few are we goin or not phone calls early in the morning and it was decided to hell with the weather we're off.

We had arranged to meet at the Cheltenham shop at 9am. I left home just after 8 and got gas at Feilding on the way thinking I was going to be a bit early. But when I got there the other two were waiting for me. A greeting and we were off over vinegar hill. Had to be a bit careful here as the road was wet in places, as it would turn out to be for the rest of the day.

We stopped for a smoko break at Flat Hills Cafe then pushed on to Taupo for lunch. The weather mostly behaved but we did go through a pretty good down pour on our way across the Desert Road. Pulled it Taupo for a nice pub lunch at about 11:30.

After lunch we gased up again and headed for Napier. It stayed nice and sunny across the plains but once we got into the hills things got wet again. Had another smoko break on the water front at Napier.

Then headed off down Highway 50 and had a quick fuel stop at Onga Onga. After leaveing the weather really started to set in. With good steady rain until after we were through Dannevirke. We pulled to Daves at 4:30pm for another cuppa then it was off home.

A good day out with just over 600k's under the wheels. Now all that is needed is a service and we are ready for the Grand Chellenge in a couple of weeks.
Posted by Mark at 12:07 pm