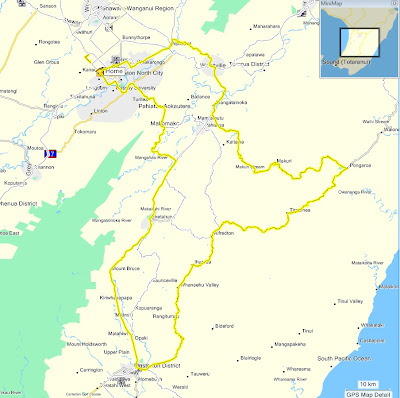 I had a busy Saturday morning: mowing the lawns, tidying the section and taking the dog for a walk so I thought it only fair that I squeeze in a little ride in the afternoon.

I decided that I needed to do a bit of Route 52 so I set off on the Connie heading for Ashhurst. On the way out of town I noticed that we still had some snow down pretty low after the bad weather we'd had on Thursday/Friday so I thought I'd better go over the saddle and see it there was any snow on the ground up there.

The saddle was in good nick - just a couple of places where there'd been slips but they had pretty much been cleaned up so were not a problem. Not a lot of snow down near the roadside but I managed to get a couple of pics of it on the surrounding hills. 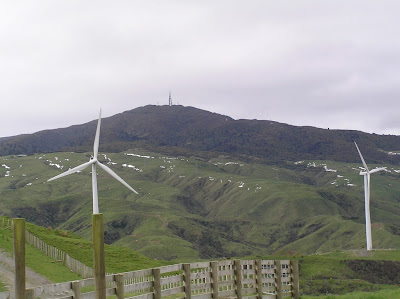 From Woodville I rode through to Mangatainoka before turning off into Pahiatua Pongaroa Road. I had a really nice ride through here as the road was dry and in good condition, there was only one area where loose metal was an issue - this will be something to look out for on the Coast to Coast in December.

At Pongaroa I turned southwards on Route 52, one of my favourites. On the first section to Alfredton there was plenty to look out for: slips, metal and debris on the road and I'm sure that there was more stock on the road than in the paddocks. I even chased a hare down the road at one stage - the Connie was quicker but the hare had better handling and off-road ability.

South of Alfredton the road is a little more open and it was great to be able to get up to a nice cruise and enjoy some of the delicious sweepers. Unfortunately the wind also came up a bit and it was a little chilly in places.

Soon enough I was in Masterton and from here I just turned for home taking the main road all the way to Eketahuna where I stopped for gas. In Eketahuna there was a bit of excitement going on - utes and people everywhere. Looking across the road from the gas station I saw a crowd and a whole heap of pigs hanging up. Must have been a bit of a pig-hunting competition on this weekend, it looked like they'd managed to bag quite a few - good stuff.

The rest of the ride was just a quick flick through Mangamire and over the track. A nice little ride to finish off my Saturday.
Posted by Andrew Thomson at 6:53 pm