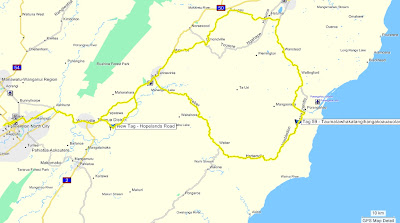 I had planned a different ride for today but when Sparkles posted up a new tag on Route 52 I just had to go get it. After a pretty crappy nights sleep I got up just after 6:30, had brekkie and got geared up for the ride.

It was pretty chilly as I pootled on up Highway 2 - only 2 degrees between Woodville and Danniverke - so the man grips were pressed into action. A quick fuel stop in Danniverke and I was on my way again.

I had decided to make the ride a loop for more entertainment so instead of dashing out to Wimbledon and back again I headed North but turned in at Matamau to ride on to Ormonville and Takapau. It was really nice through here with no traffic and a slight increase in temperature.

Soon enough I was on Route 52 heading towards Porangahau and enjoying the fast and flowing roads. The only issue through here was a family of turkeys out on the road and then 3 sheep crossing the road in front of me. I made very good time and by just after 9am I was at the tag: Taumatawhakatangihangakoauauotamateaturipukakapiki-maungahoronukupokaiwhenuakitanatahu, which has the distinction of having the longest place name in the world. 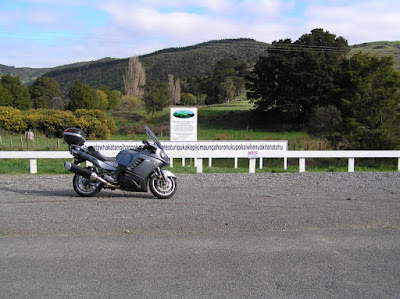 From here it was more of Route 52 to Wimbledon and Weber, then Weber Road into Danniverke. I really love these roads and it was a great ride except for getting stuck behind a 5th wheel caravan for a few minutes.

All this time I was wondering where to place the tag and after considering various places I decided to place it closer to Palmy but off the beaten track a bit. So I turned in at Oringi and kept my eyes peeled for a suitable spot on my way through to Hopelands. In the end I snapped the shed below just after turning out of Jacksons Road. 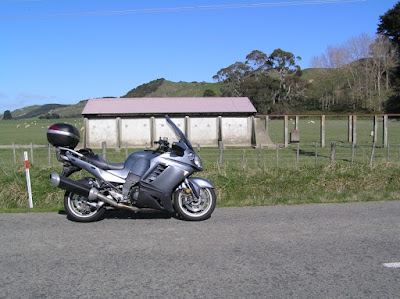 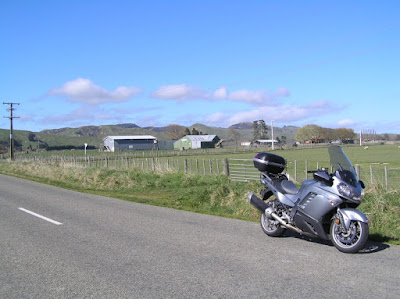 New tag found I turned for home to get it posted. I was home by 11am and yes, nobody had beaten me to the tag so all was right with the world. What a great way to spend a nice sunny morning!
Posted by Andrew Thomson at 4:48 pm