Okay, so it was over a month ago so I can talk about it now without getting to annoyed…

I had a great Friday night ride with the guys.  We’d had a blast doing the Apiti Loop in pretty short time before finishing up at the Ashhurst Pub for refreshments.  Enjoyed the relaxing for a while but eventually decided it was time to head home.

Supersonic and I fired up our bikes and took off.  As per usual when I the Honda I popped a little wheelie and landed it reasonably ok but then my trouble started.  It had been quite a hot day and as I was braking for the turn onto the main road my front tyre came into contact with some hot tar.

The next thing I know is that I’ve lowsided and am sliding down the road watching the Honda do the same.  As I was sliding down the road I can remember thinking: damn metal on the road!  Luckily I was not going that fast and didn’t really hurt myself so I was up in no time running over to check the bike.

The Honda had landed pretty hard 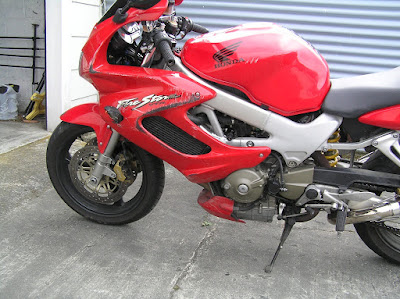 on it’s left hand side and with various bits bent and broken was going nowhere – damn!    Supersonic pulled up and came over to see if I was ok and find out what had happened.  It was him that discovered that it wasn’t metal on the road when he spotted skid-marks in the hot tar – unbelievable, it was 9 o’clock at night!

Anyway, after a fair bit of nutting off at myself for being so stupid to fall off, I got myself sorted and pushed the bike back to Meanie’s and then the pub to share my tale of woe.  Later on Meanie and Sarge helped my load the bike onto Meanie’s ute and get it home – very much appreciated guys! 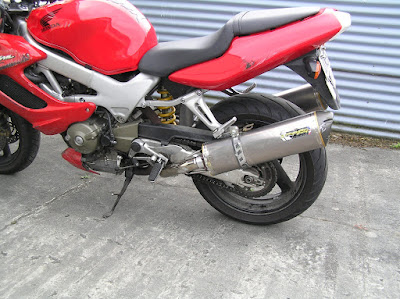 I ended up with a decent bruise on my thigh and a very sore thumb but otherwise pretty much unscathed – even went to the AC/DC concert the next night.  My gear did it’s job and my Spidi pants are now toast and my old Nazran jacket has a torn sleeve.  My helmet never hit the ground so it’s ok and my Alpinestars gloves will live to see another day.

As for the bike, there is as I said quite a lot of damage to it but luckily it has not been written off and is in the process of being nailed back together.

All in all, not a very good Friday night ride and not the sort of thing I want to repeat…

Posted by Andrew Thomson at 5:12 pm