Yesterday was the 19th running of the Woodville Lions Coast to Coast and about number 11 for me.  In the morning Mark and I cruised out to Himatangi where we met up with Meanie and Monie and signed up for the ride.  By the time of the riders briefing there was probably at least 200 bikes waiting with more late stragglers still arriving as we were leaving.

From Himatangi we quietly rode into Foxton before turning towards Shannon where the four of us pulled out of the line just long enough to top up our tanks to avoid the mad rush at Woodville.  Tanks filled we managed to get back into the procession as a lot of bikes were still coming through from Foxton.


With the gorge still shut and the Saddle being the most popular detour for traffic it was good that the ride took us over the Pahiatua Track and then through Ballance to Woodville for the lunch stop.  In Woodville we enjoyed a BBQ lunch and chatting with other riders before sneaking off early ahead of the pack to avoid being held up or taken out by idiots.

We weren't the only ones to do this and Mark and I ended up passing quite a few cruisers on our way through to Pongaroa.  In Pongaroa we went our separate ways as I was keen to try out an alternate (read: gravel) route to Akitio while Mark was not quite that keen - even though it was 10km shorter in distance.  Coast Road turned out to be a great ride with about four sections of very fast, easy gravel and some pretty nice scenery too.


In the end Mark beat me to the beach by about 2 minutes but I was quick to point out that I'd stopped twice and had been riding on a slightly more tricky surface than him...
While we were waiting for the others to arrive we grabbed a cold drink and parked up to watch the rest of the bikes come in.  After chatting with the others and checking out the beach we decided to skip the prize giving and head home.
I tucked in behind Mark as far as Waione (at the Route 52 turn-off) where I pulled over and convinced Mark that he needed to sample a V-twin for a while.  From then on we had a blast riding back towards Danniverke - swapping the leader every now and again so we could both have the opportunity to see (and in Mark's case hear) our bikes in action.

Normally we stop in Danniverke for fuel but the Bandit's gauge had a couple of bars left on it and I figured the DL would be ok too so after a few rude gestures at Mark we bypassed Danniverke and then took some more back roads that eventually hooked us up with the Saddle Road for the last leg home.  A coffee at Mark's and a chat about the ride and the bikes and that was it - home for tea!  Another Coast to Coast done and dusted (this time with dust included). 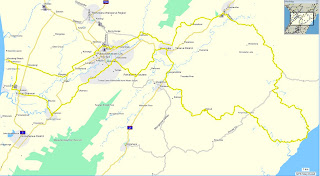