A gap in the weather

Over the weekend we'de had quite a bit of rain and while there was a fine spell on Sunday morning while I walked the dog, the rain reappeared just after I got back home.  So it wasn't looking too good for a ride - until I sat down for lunch.  The clouds had cleared a little and if I really tried hard I thought that I could see some blueish tinges - ok, I convinced myself, a ride was on!  The Vee was quickly wheeled out and I was off.

With all the rain we've had I was expecting the gravel to be in good nick and I didn't think that dust would be much of an issue so I dreamt up a ride that would take in quite a few good gravel roads over the other side of the Tararuas.

Before I hit the gravel I had to cruise over the Pahiatua Track looking out for the slippery bits (and the road works at the bottom of the hill) before turning off towards Mangamire.  Before Mangamire I turned off again to take in my first bit of gravel on Kopikopiko Road.  It had been a few weeks since my last gravel ride so it took me a wee while to get into it.


At the Mangahao River Kopikopiko Road heads off to the right to eventually peter out near the ranges while going straight ahead and over the river takes you onto Pukehoi Road (yes, that's another video - I took a few and decided not to clutter up the blog with all of them).

By now I was getting into the swing of things and the gravel was in great condition so the DL got to stretch her gravel legs a bit which is always Fun (note the capital F)!

Unfortunately Pukehoi Road eventually becomes tarmac.  But turning right onto takes you West on Kakariki Road which is more tarmac but leads you quickly to Mangaraupiu Road which is pretty fast gravel.  Turning right onto Mangaroa Road then starts the trip back towards SH2 via some more good gravel and the odd bit of tar.  Two more short sections of gravel on Quarry and Cliff Roads finally spit you back onto the main road to Eketahuna.

As I'd been cruising along I was trying to figure out where I wanted to go next - further South for some more loops East of Eketahuna or head back towards home? In the end I decided to make my way home but to sample as much gravel as I could.  The first gravel road I took was Central Mangaone Road which took me further Eastward.

At the end of Central Mangaone Road I turned left which would then take me up Mangaone Valley Road.  Following this sealed road would eventually take me all the way through to Pahiatua, but it would be tar seal all the way - can't be having that now can we?  Cruising along I spotted a likely looking road to my right - Tawataia Road.  I think I may have done a section of this in the past but it was definitely worth another go!


Tawataia Road ends at Alfredton Road which funnily enough takes you into Alfredton and onto Route 52.

From here I'd take Pa Valley Road back to Mangaone Valley Road and into Pahiatua.  Great roads with nice scenery but tar all the way. 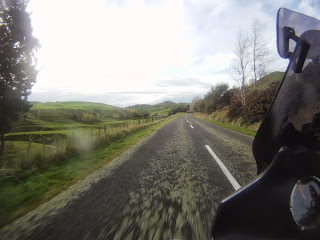 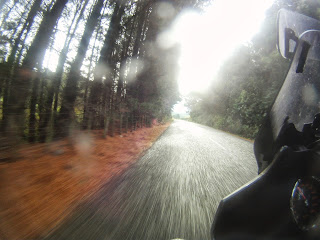 In Pahiatua I turned to head for home but not before taking in one last little bit of gravel on Tararua Road.  This was a great little squirt to finish off the ride - I enjoyed it even more than the trip back over the track.


I finally rolled up my drive at about 3:30 (just in time for Moto GP on TV) after a great little 170km (and about two and half hour) ride.  It didn't even rain on me!