Yes, this weekend was Queen's birthday weekend so we got Monday as our bonus day off - and it seemed a shame to waste it.  Especially after two phone calls in five minutes from peeps wanting to go for a ride - Brian and Dad.

So, in order to satisfy both of them a plan was hatched for Brian and I to cruise up to Waipuk to meet Dad (and his new to him Beemer) taking back roads wherever possible.

But things didn't start off too well.  I'd plan to give the Connie a run as she's been parked up in the shed for too long but when I went to move the car out of the shed it wouldn't start.  Some idiot had left an interior light on and drained the battery - guess who...

So after hooking up the battery charger to the car I wheeled out the the V-Strom pretty much at the same time as Brian rolled up the drive.  Geared up I followed Brian out through Aokautere and through the gorge behind some slow traffic.

Riding to Danniverke for our gas stop it was a bit blustery and the wind had a little nip to it but the day was otherwise fine.  Fuelled up it was time to turn off the main road and make our way up to Waipuk via Ormonville and Takapau.  There were some great Autumn/Winter colours on display and I possibly should have taken a camera with me...

Dropping down into Waipuk I spotted this silvery looking thing coming our way and noticed it had cylinders poking out either side so had a pretty good idea who was coming our way.  We pulled up on the side of the road to oh and ah at the new bike. 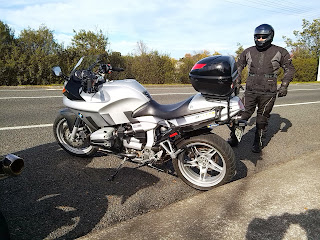 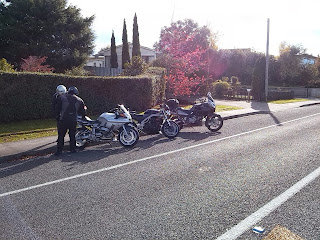 Next item on the agenda was for me to go for a short squirt on the Beemer.  I shot back out the way we'd come and went looking for a few corners.  The silver bike behaved itself and felt pretty nice on the fast flowing corners that I managed to find.  Not as torquey as the V-Strom but fairly smooth and it felt nice and planted on the road.

One short test ride later and it was time to find a cafe in Waipuk for a drink and a nibble.  We parked up outside a bakery/cafe next to a couple of other bikes and chatted to the riders while enjoying our pastry wrapped goodness.

As it was only just after 12 we had plenty of daylight left so had to make the big decision on how to get home and stay out of the way of the boys in blue (4 km/h tolerance this weekend).

In the end we decided to rock the top section of Route 52 to Wimbledon and pop back out at Danniverke again.  This is a great ride but it does demand attention with plenty of hazards for the unwary - stock, metal on the road, storm damage etc.

From Danniverke we once again stuck to back roads which follow the ranges closely and then took the Saddle (still in poor condition - littered with roadworks and gravel) into Ashhurst and home in Palmy by 2:30.  A nice little ride to end the long weekend - the Connie is going to have to wait until next weekend for some exercise...