Trying to keep the air in

As mentioned in my last blog, I came home from the Moto-X on Sunday to discover that the poor Connie was sitting on a flat tyre.  Tonight it was time to take a look at it and decide how I was going to get the bike or the wheel into the bike shop for some new rubber that is sitting there waiting for me.

I decided that I would see how bad the leak/puncture was by blowing the tyre up.  Then I could decide whether to just wait and pump the tyre up before I took into the shop or learn how to remove the rear (I still haven't done this in 6 years of ownership).  Ideally I wanted to get the bike into the shop as both tyres need replacing and I didn't really want to have to make two trips to get the job done.

In the end I actually had to put some air into the tyre before I could move the bike and get it on the main stand.  Then I could start looking and listening for the leak.  With a bit of air in the tyre I spun it around and immediately spotted the culprit. 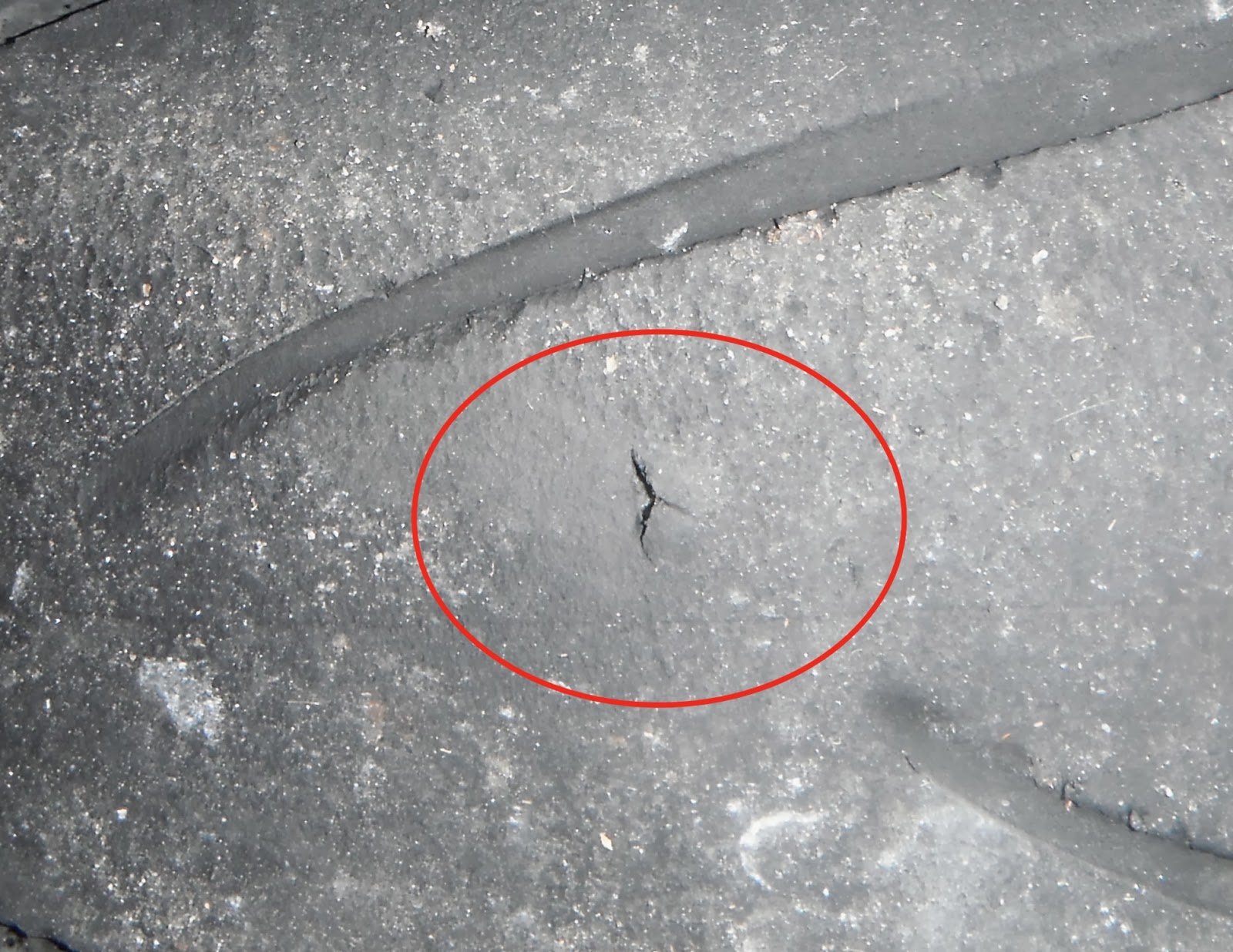 If you look closely you may see a little shiny something inside the hole.  I still don't know what it was (perhaps a nail, maybe a stone) as I could not pull it out and it ended up inside the tyre.  So, I decided that I would try and fix the puncture rather than either of my two previous plans - at least it would be good practice in case I was unlucky enough to get another puncture out on the road. 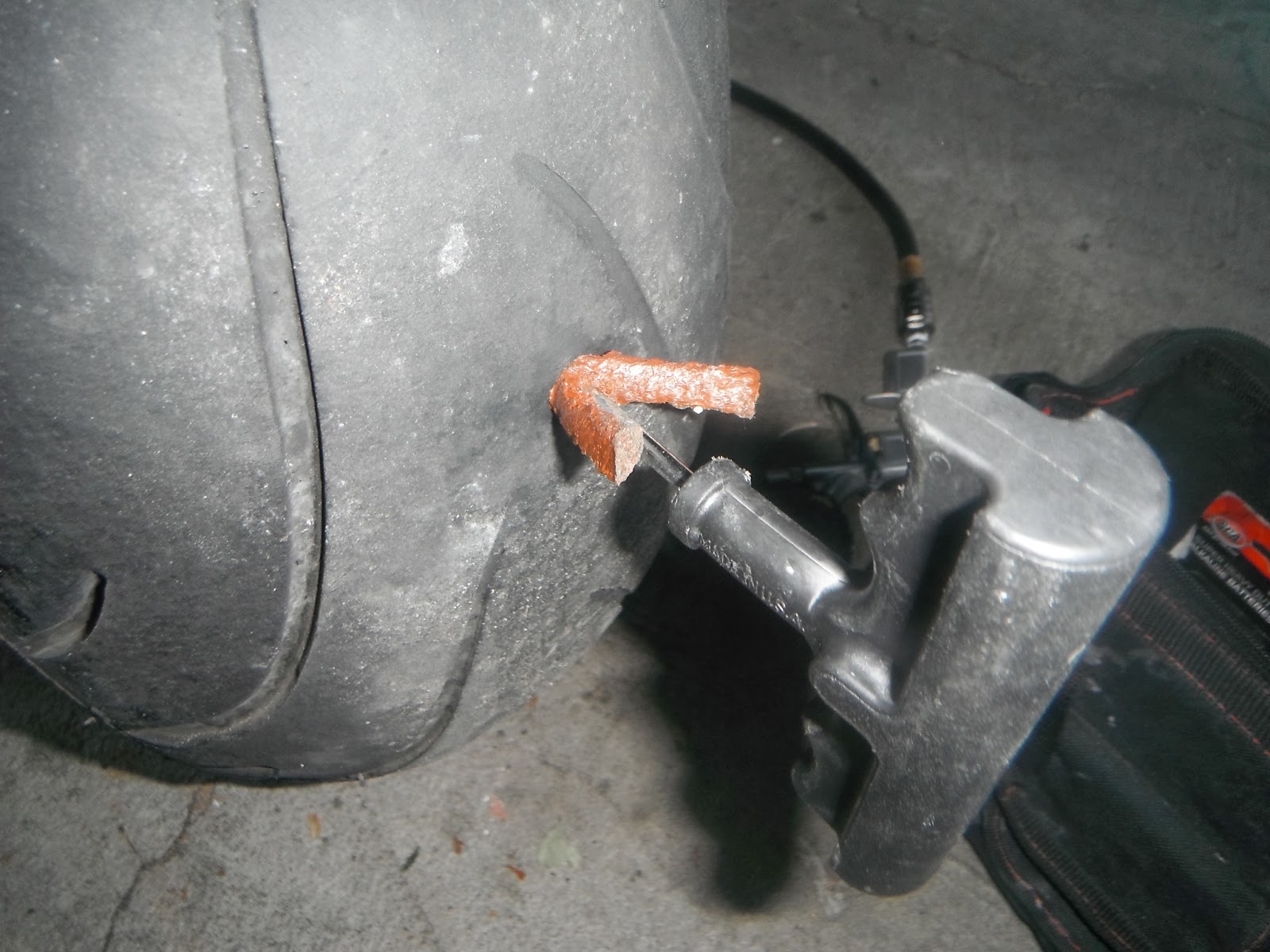 A quick twist and then I removed the insertion tool. 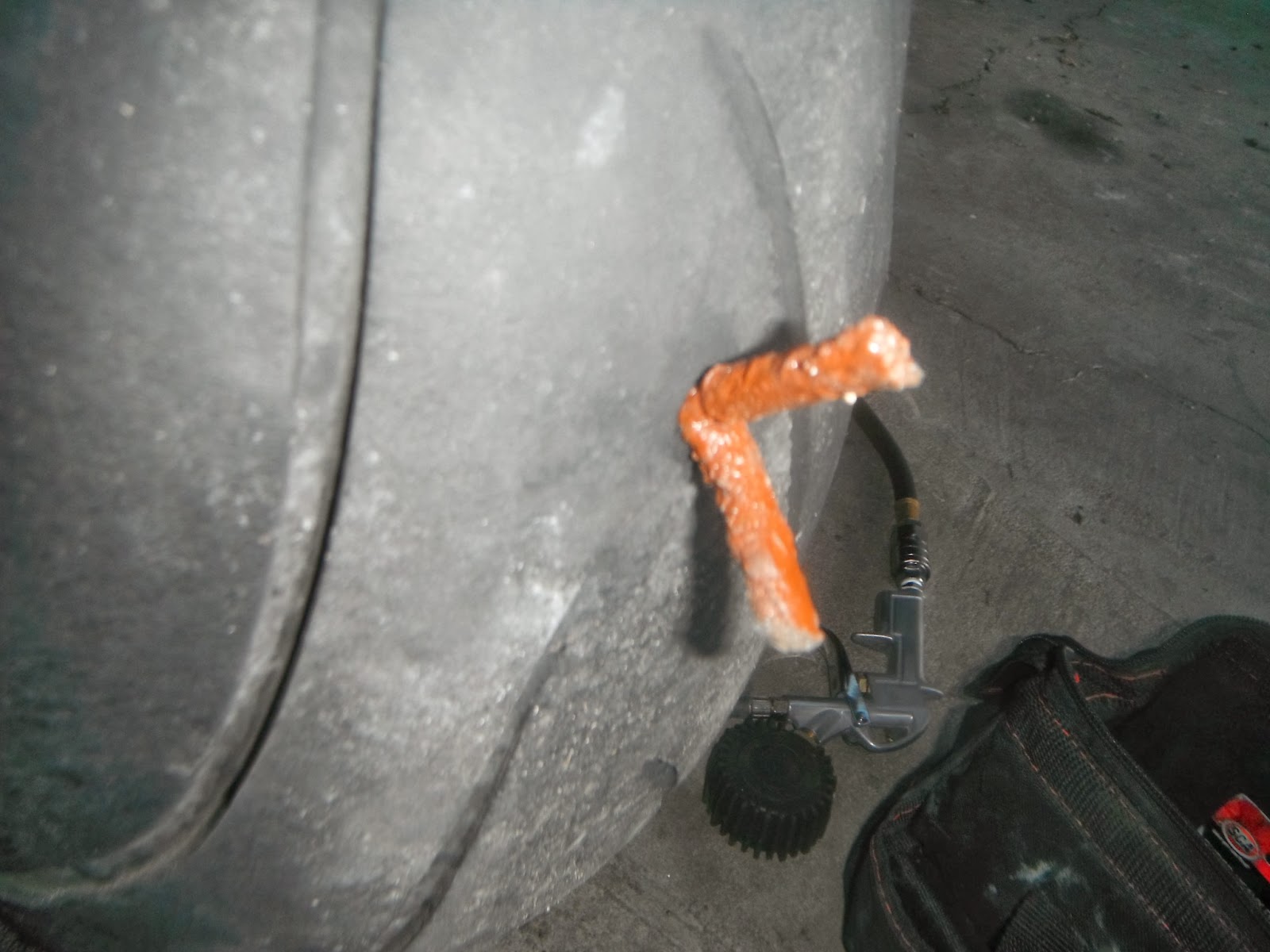 Followed by a little trim of the excess sticking out. 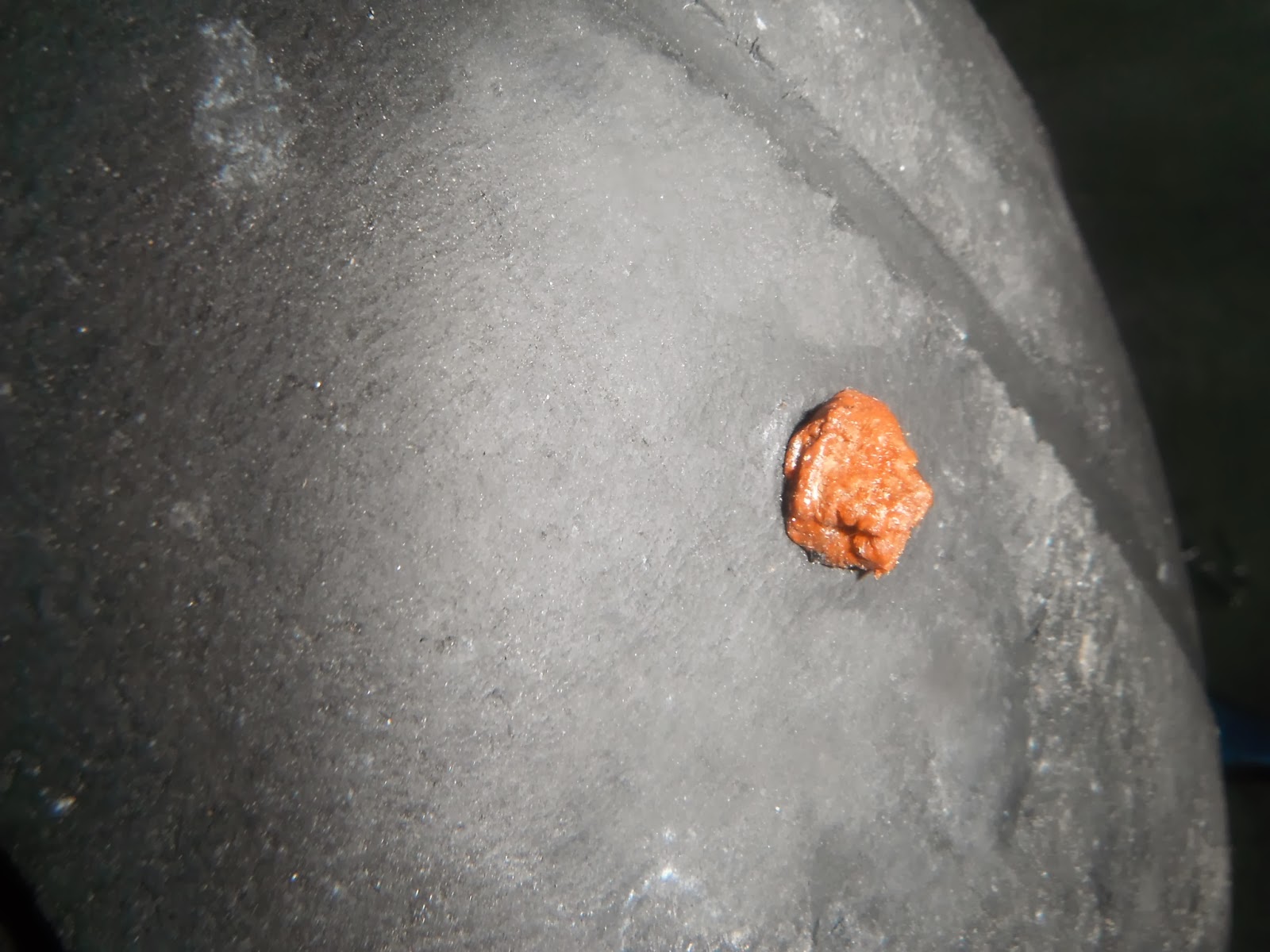 Then it was time to see how well the plug was sealing.  I pumped the tyre up and grabbed some soapy water to check for leaks. 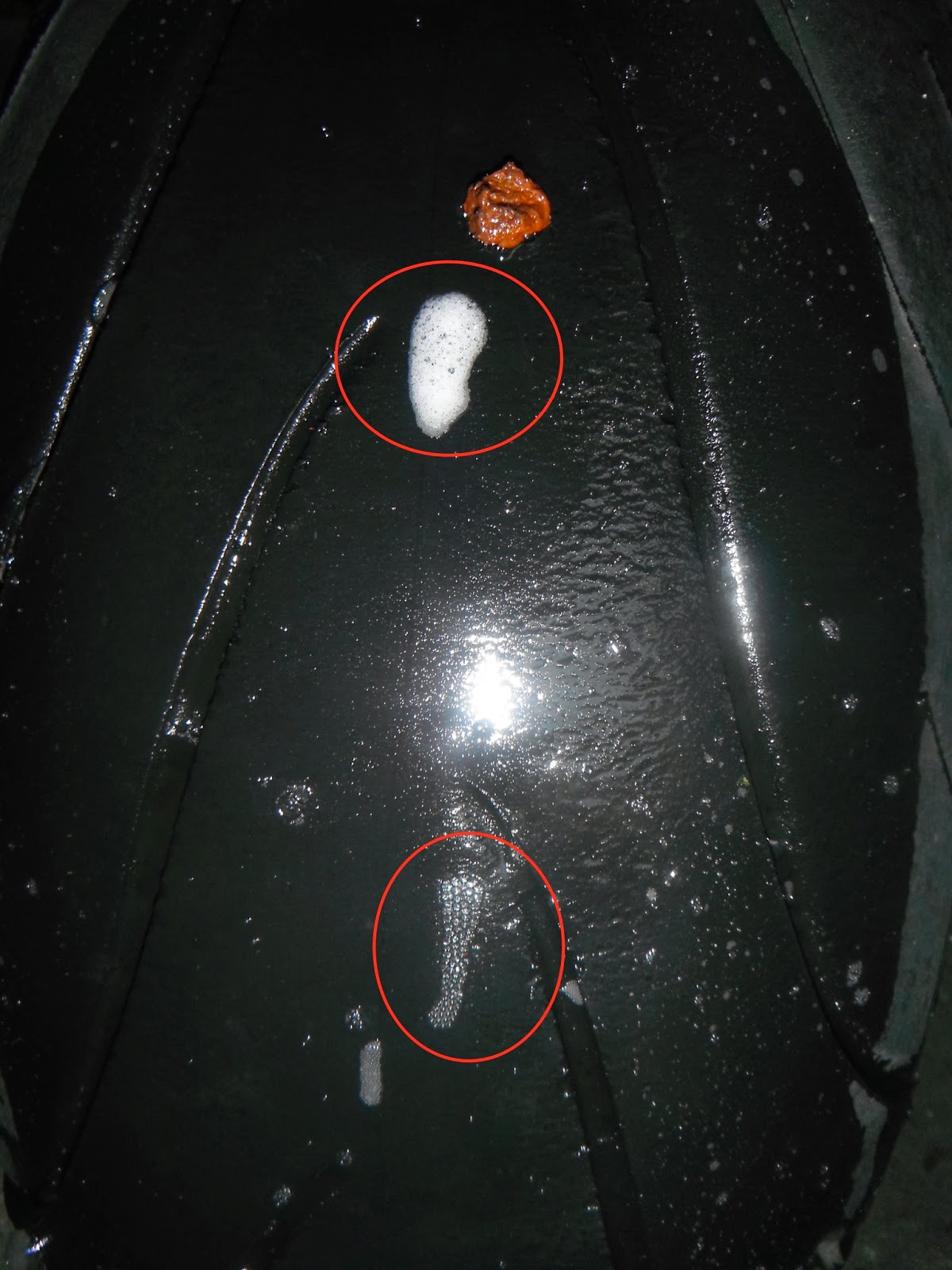 How's that for a surprise?  The plug is sealing perfectly but there are two other tiny leaks just in that portion of the tyre!  I decided against checking the rest of the tyre...

Tomorrow morning I'll check the pressure and hopefully be able to ride it into the shop for two brand new PR2's...well, that's the plan...
Posted by Andrew Thomson at 9:00 pm