Sunday was our monthly BRR ride (let's just forget that wee practice the weekend before) and Neil had managed to order in some fairly decent weather - it was quite cold but the rain pretty much stayed away the whole day.

The plan was to meet up with most of the group in Ashhurst before riding onto Dannevirke to fuel up and pick up some more Hawkes Bay based riders.  I was on the road just after 8 and with grips on I took a slightly different route to Ashhurst which offered up the first interesting event of the day.

Riding along Ashhurst road I was forced to stop at an accident site that the fire brigade were still cleaning up (hosing the road off).  No sign of an ambulance so I hope there weren't any nasty injuries - although I did see one very second hand looking Ford Lazer that definitely had driven it's last mile.

I wasn't the first into Ashhurst but pretty close to it and soon we were all assembled awaiting our leader - all 24 of us! 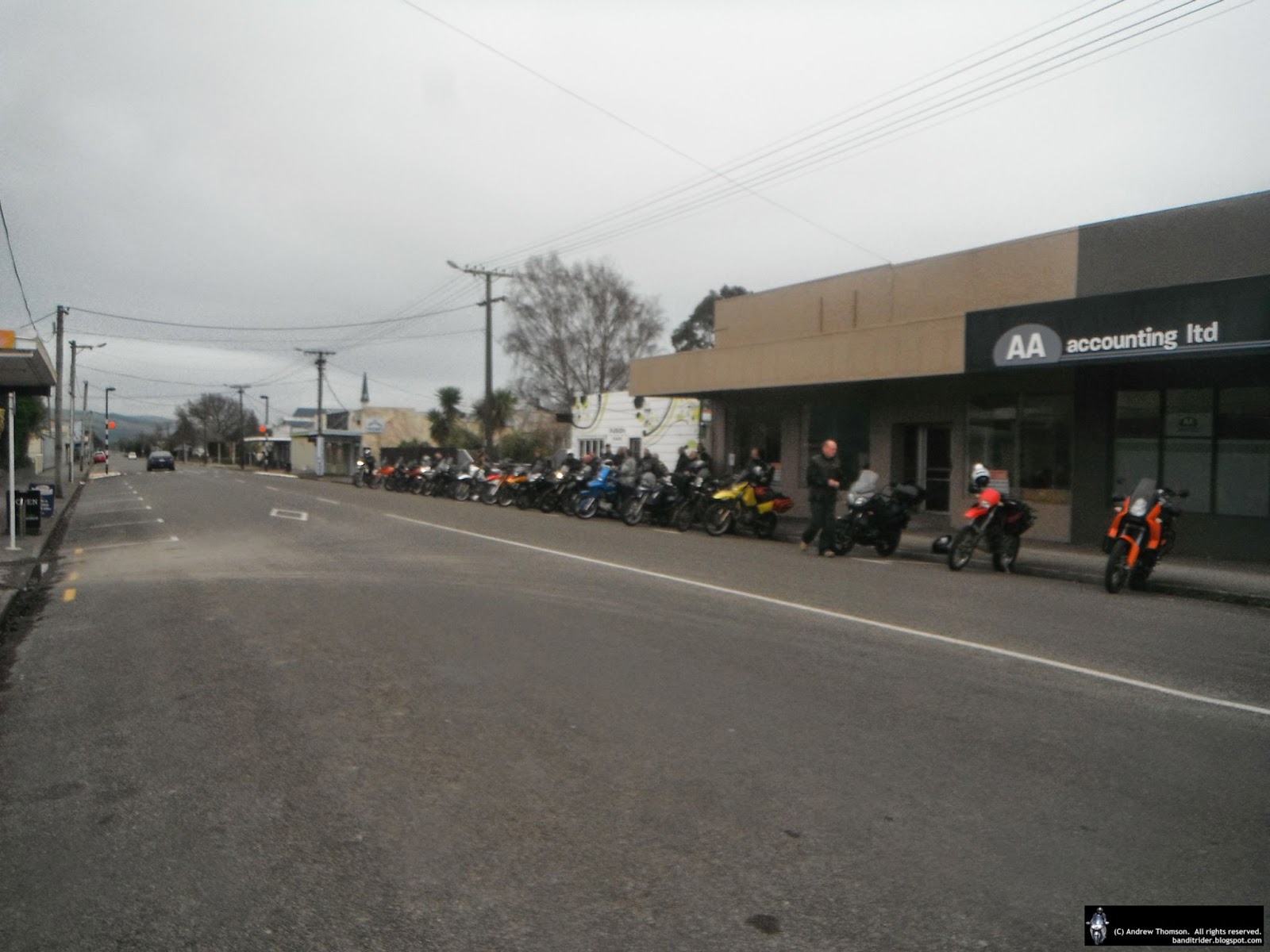 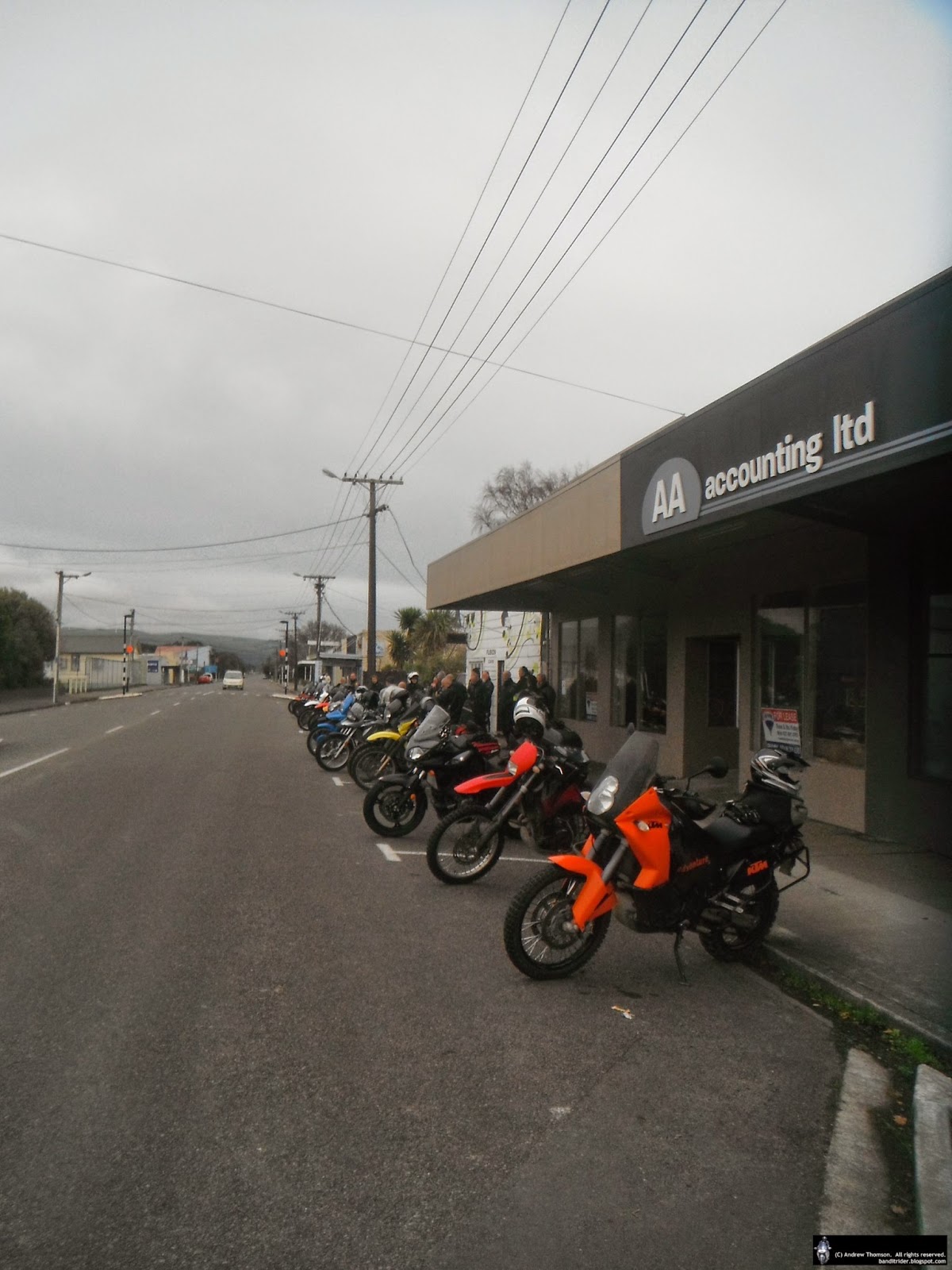 I have a sneaking feeling that the cafe owner may have wished he'd opened earlier as he was only opening up as we were getting ready to set off...

From Ashhurst Neil led us through the gorge before taking us on the scenic route through Jacksons to Oringi and finally up the main road to Dannevirke.  There we gassed up, met the other guys (taking our numbers to 28!) and had our ride briefing.

Our first bit of gravel was on Maunga Road and this spread the group out a bit as faster guys snuck away from the more sensible ones.

Along here I also witnessed my next bit of excitement when a DR pilot who shall remain nameless (hint: starts with R and rhymes with Boss) decided to run wide into a left hander.  He then ran a little bit wider and then a bit more until he finally ran out of wideness to use up and bailed off as his bike took a little trip over the bank, flipped over and landed with it's wheels facing uphill and the bars downhill.

Luckily it was a slow speed mishap and DR's are made fairly tough.  We soon had the bike up the right way and back up the bank - glad it was a lightweight 400 and not a thou...

We met up with rest of the crew at the end of Maunga Road for a bit of a regroup and it must be said - just a wee laugh... 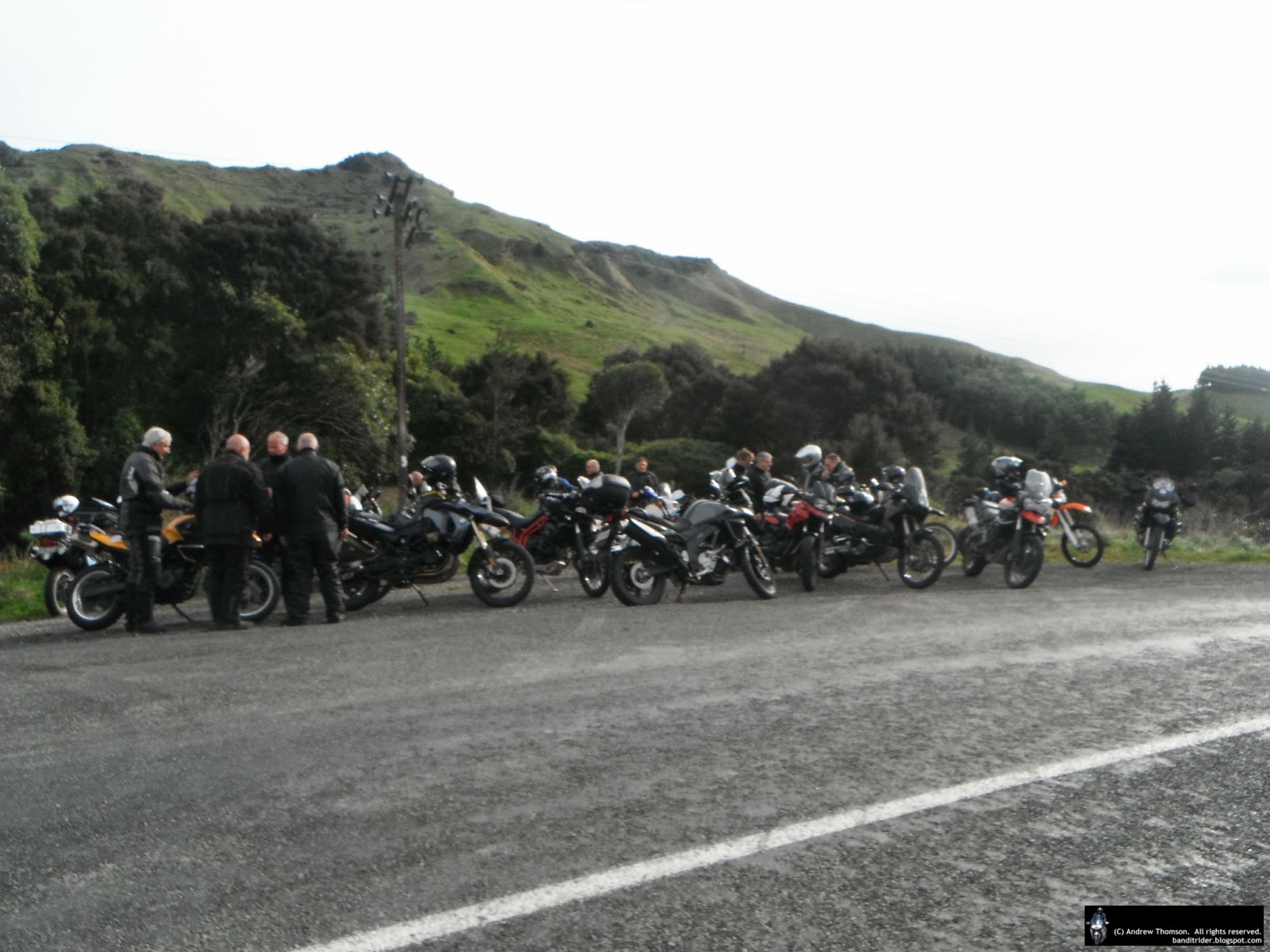 Next up was Te Uri Road which alternated between seal and gravel to Mangaorapa and finally onto Porangahau for our lunch stop. 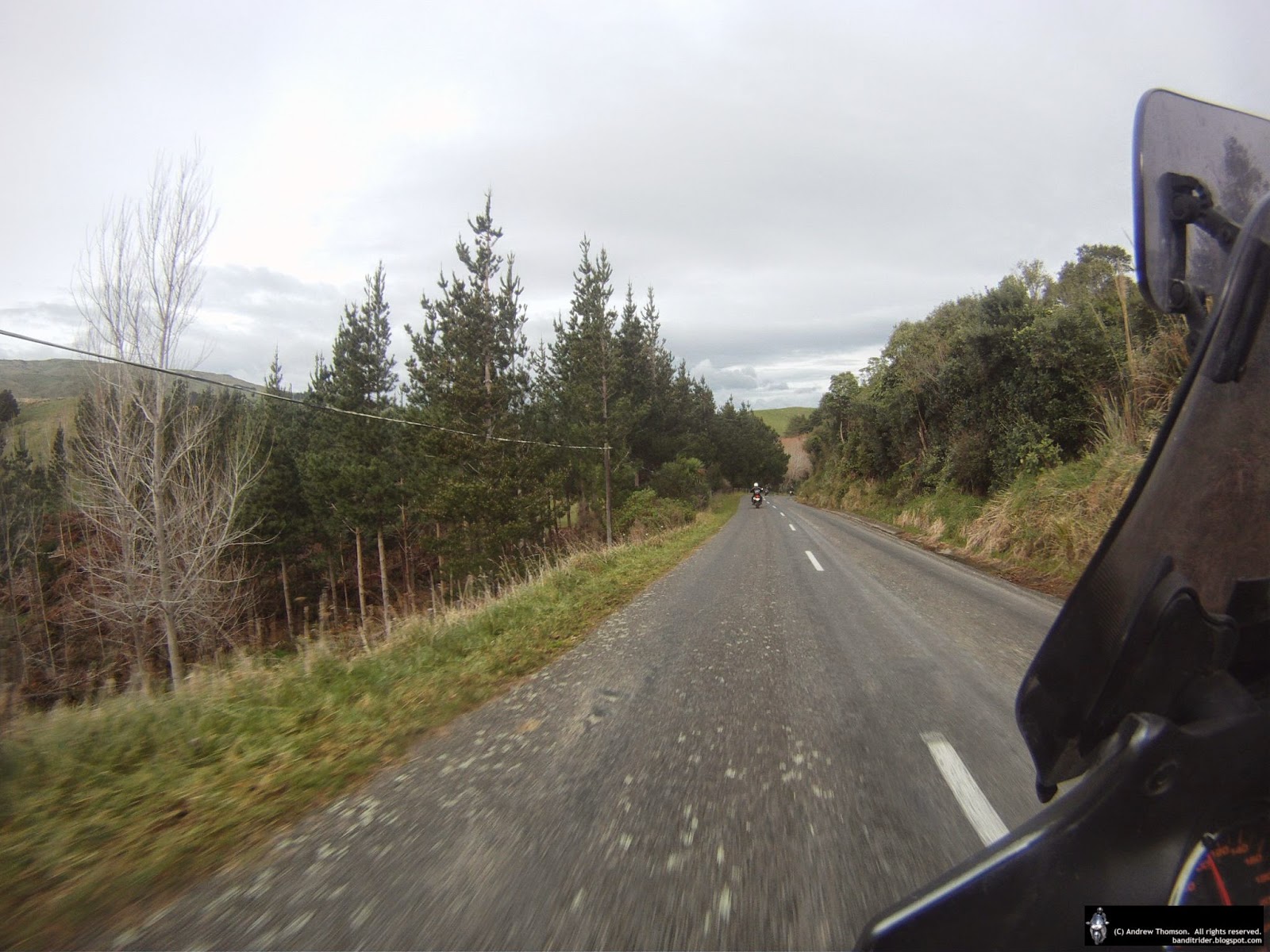 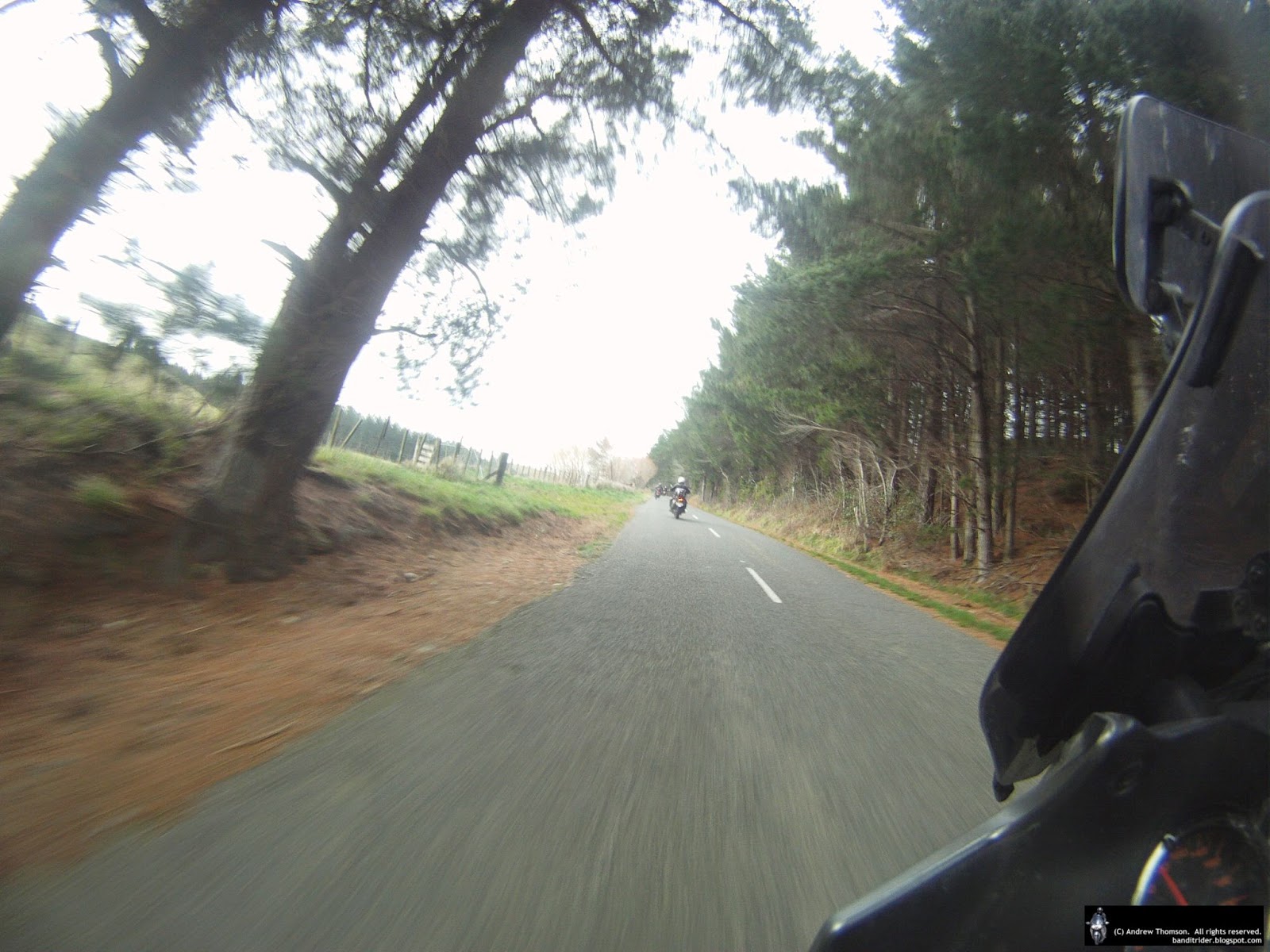 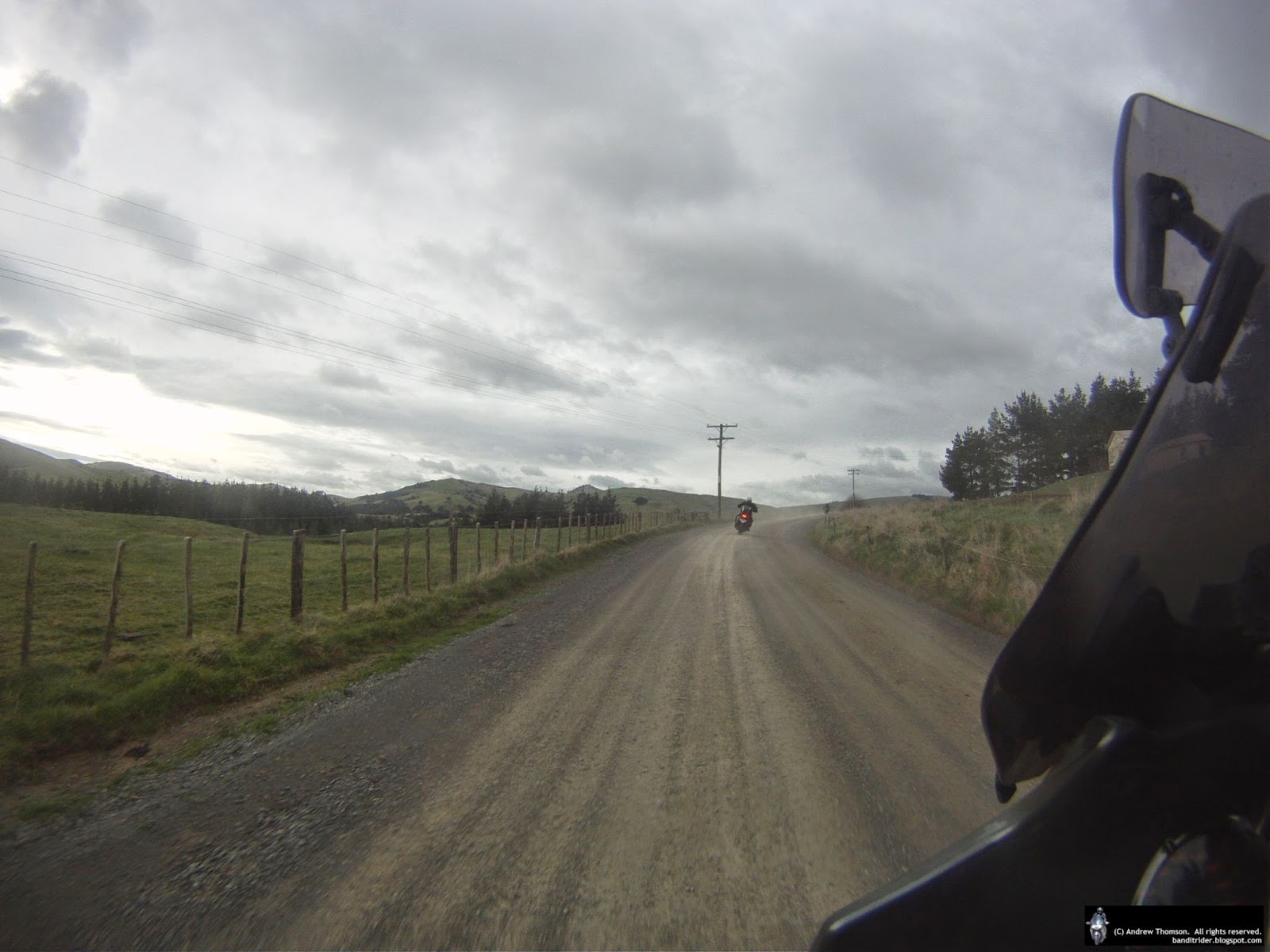 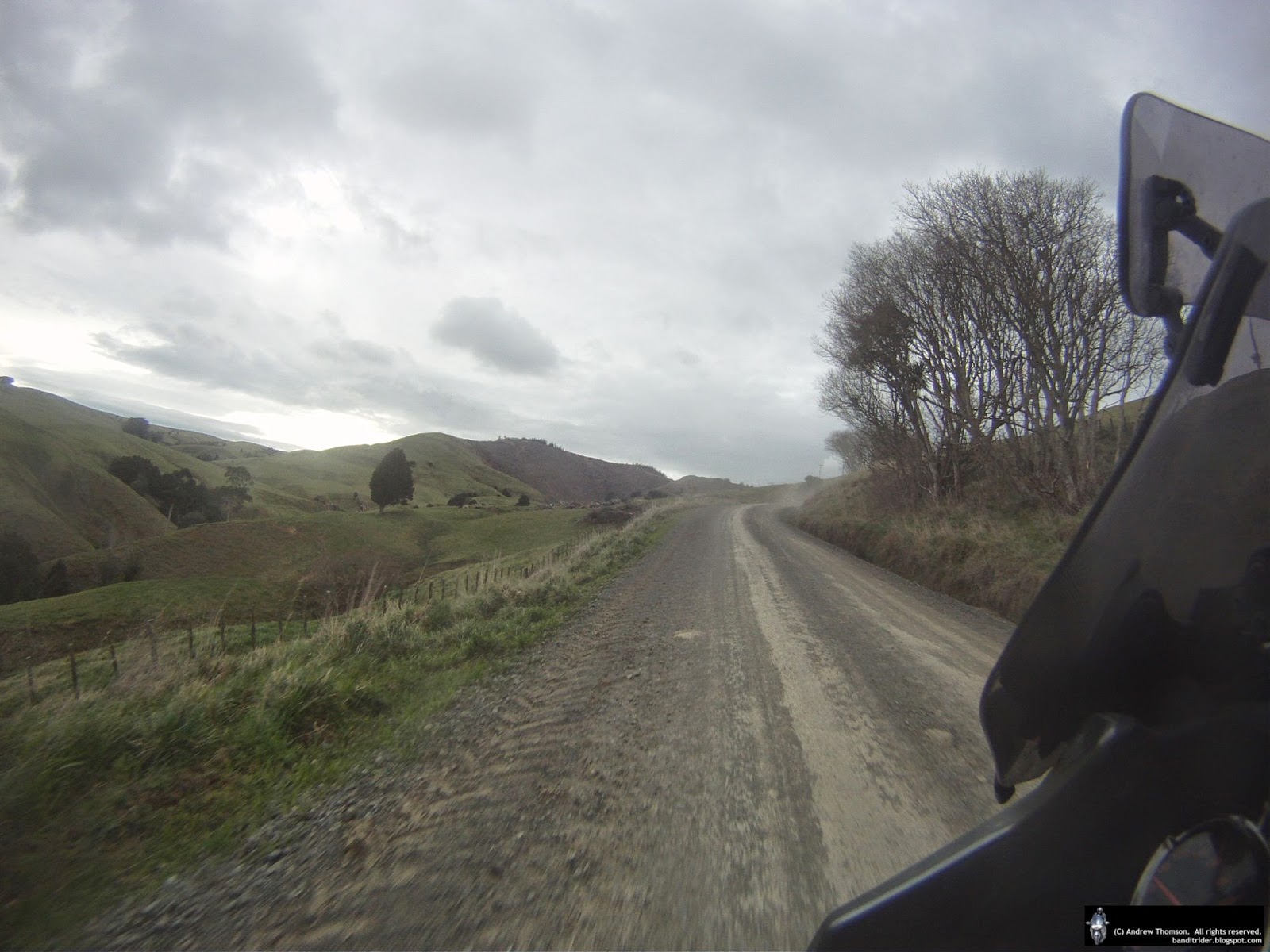 We did get the odd little spit through here and some of the sealed roads were a bit slippery (I had a good step out on one turn-off).  Some of the gravel sections also had the odd slippery spot and quite a few guys mentioned that it was a little tricky to tell what was slippery and what wasn't - all adds to the fun though eh?

In Porangahau our horde totally swamped the pub and it probably took them twenty minutes just to take our orders!  I'm pretty sure they weren't really expecting a big bunch like us all turning up at once and expecting a feed! 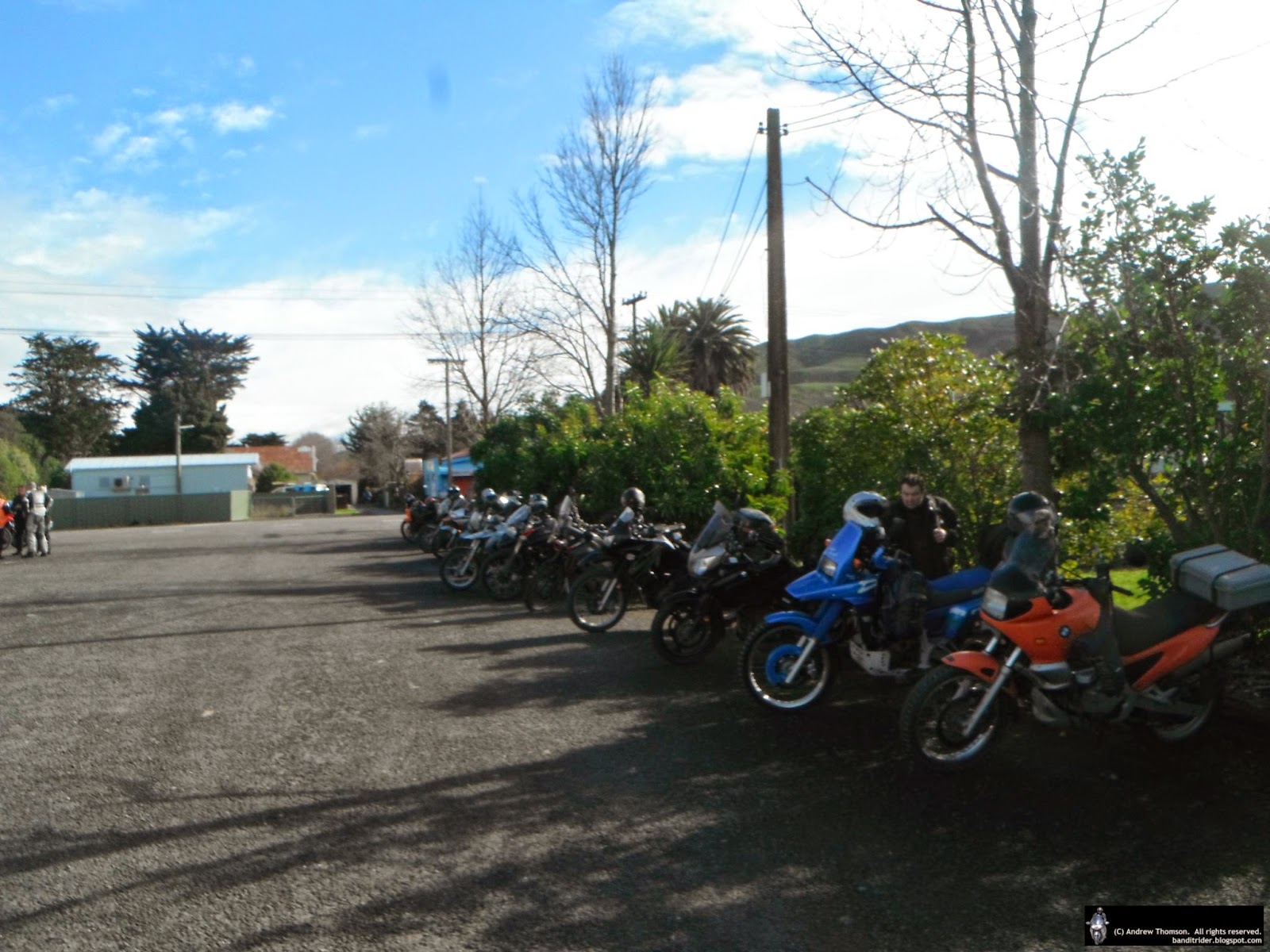 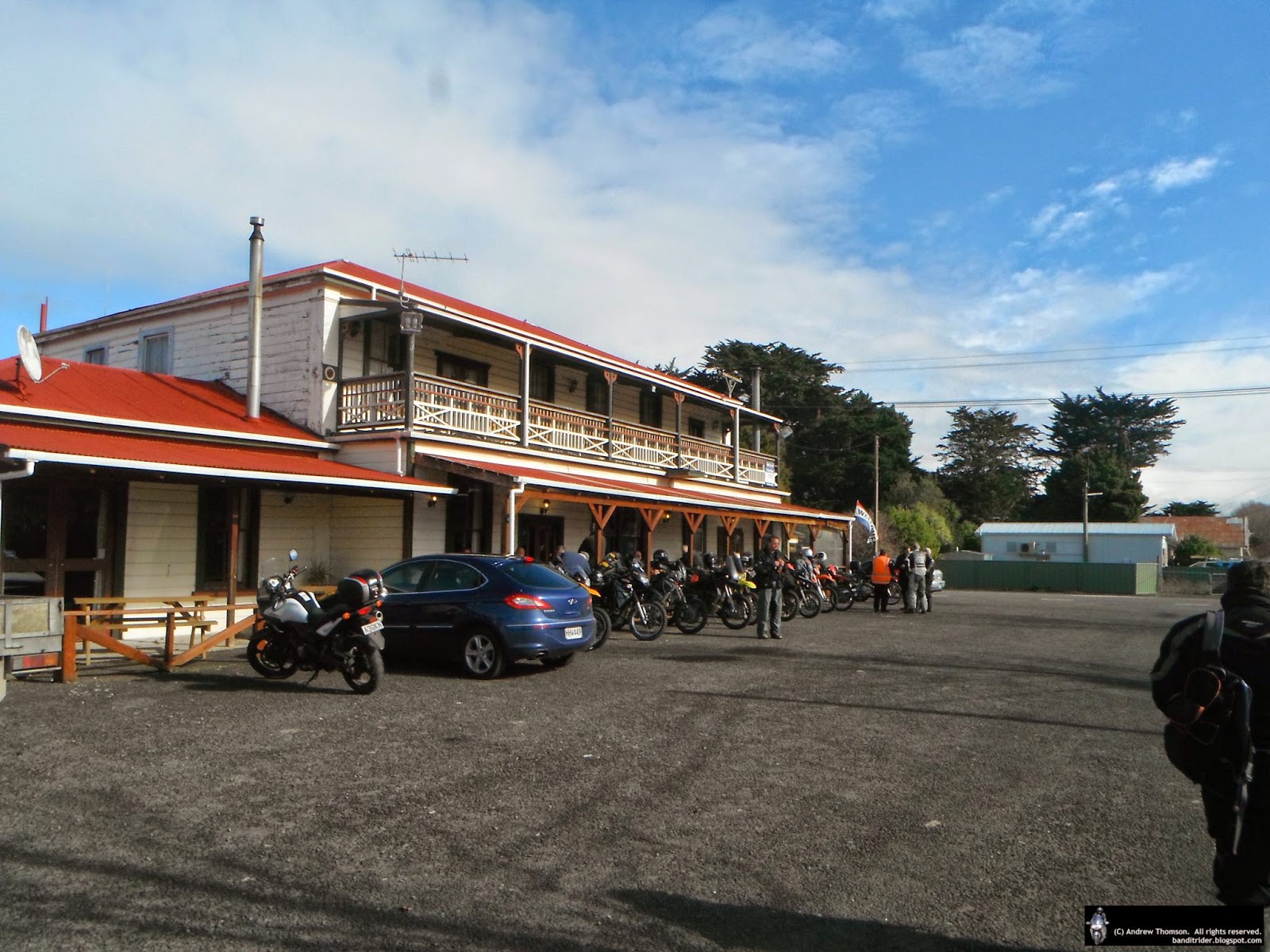 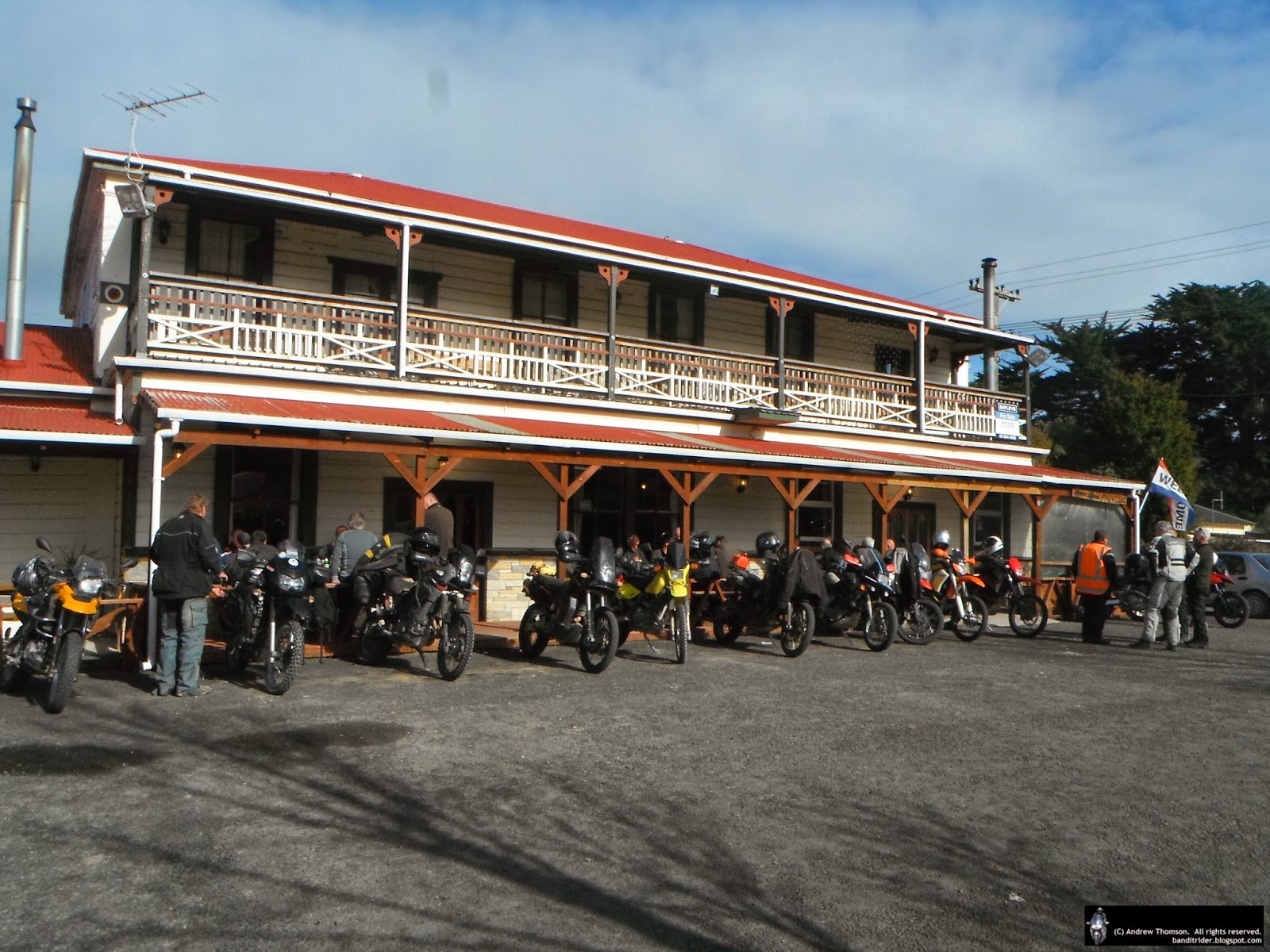 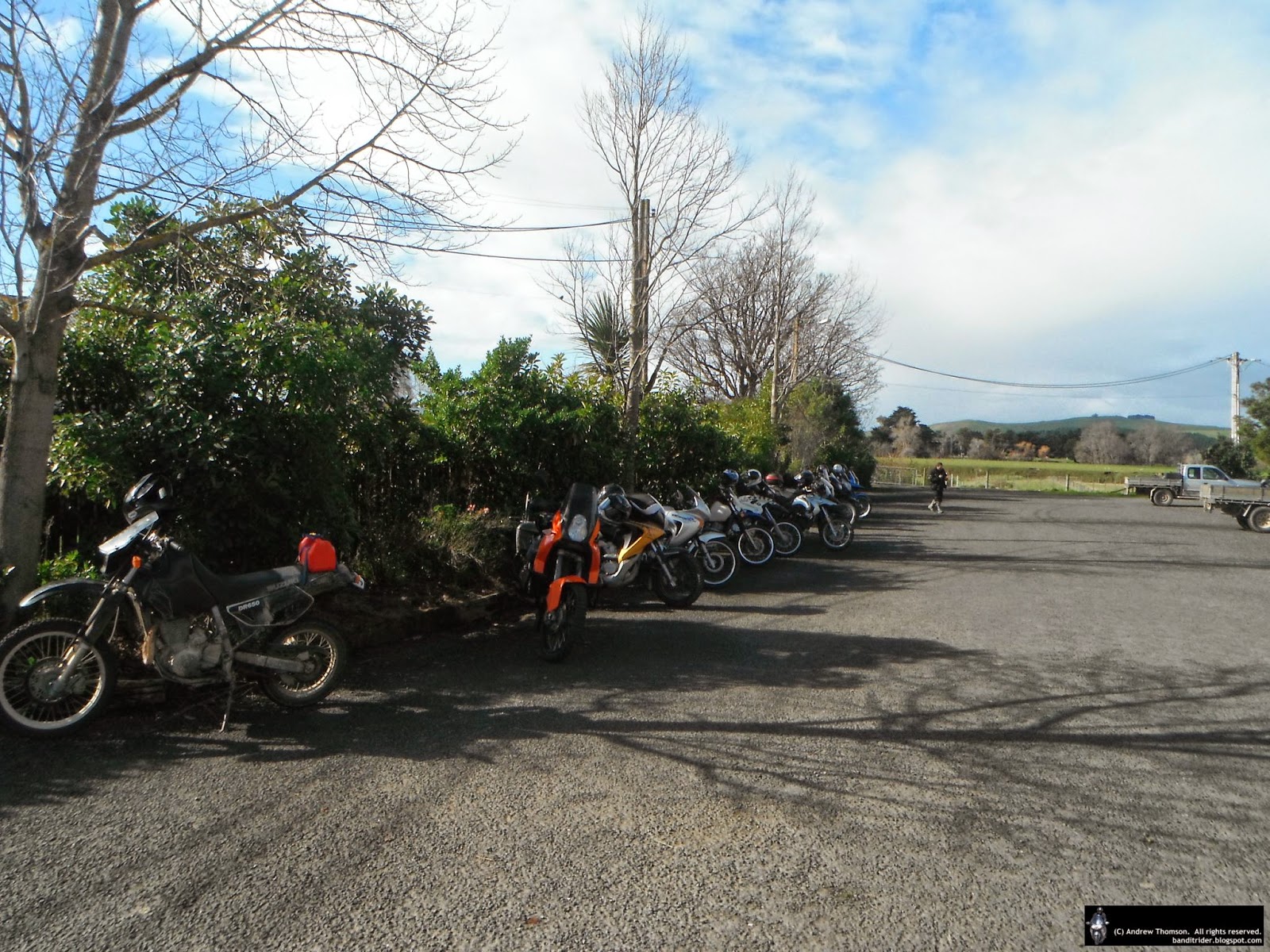 After a lengthy lunch stop (but we all got fed!) we were off again and headed South on Route 52 to Wimbledon. 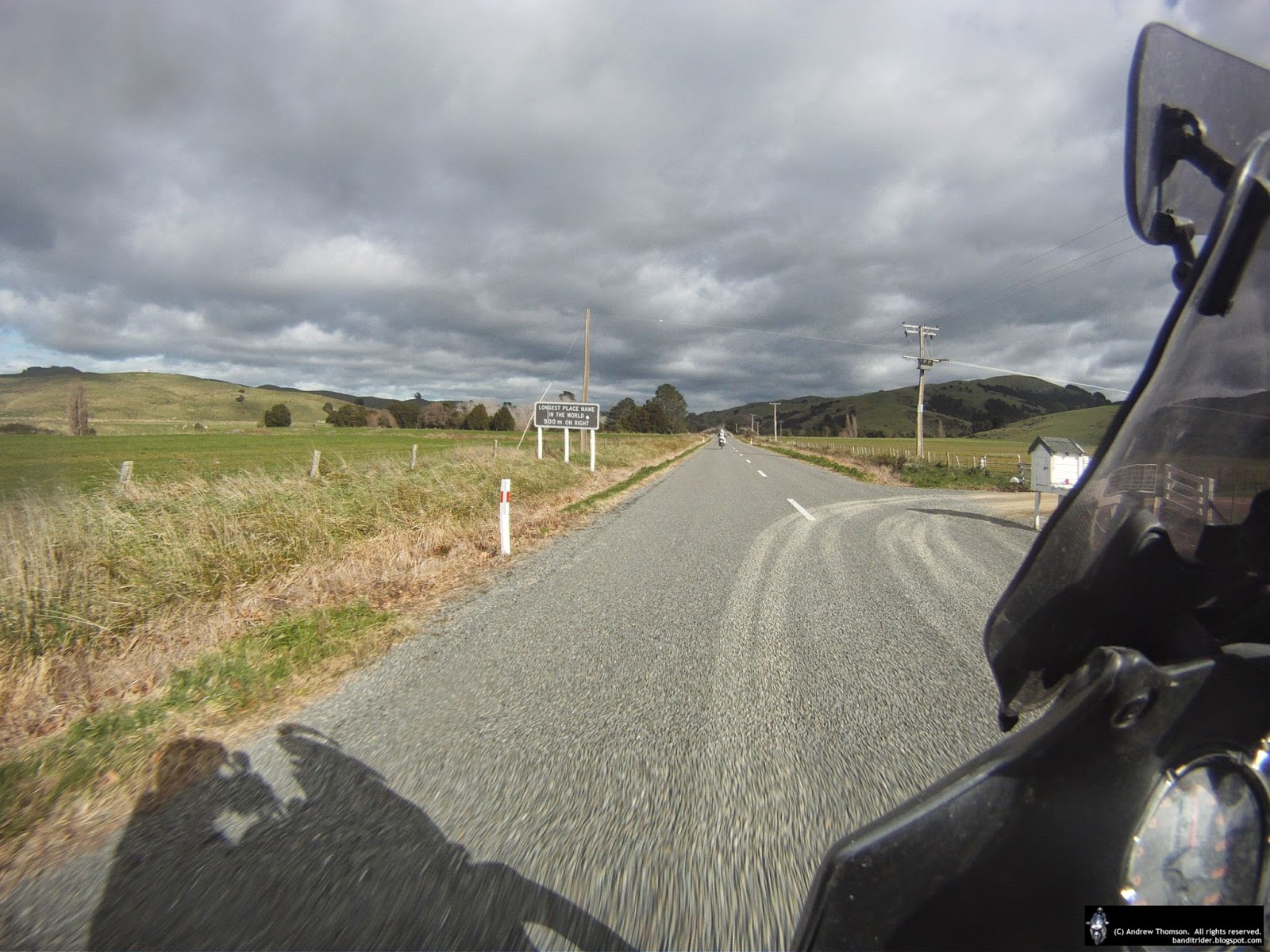 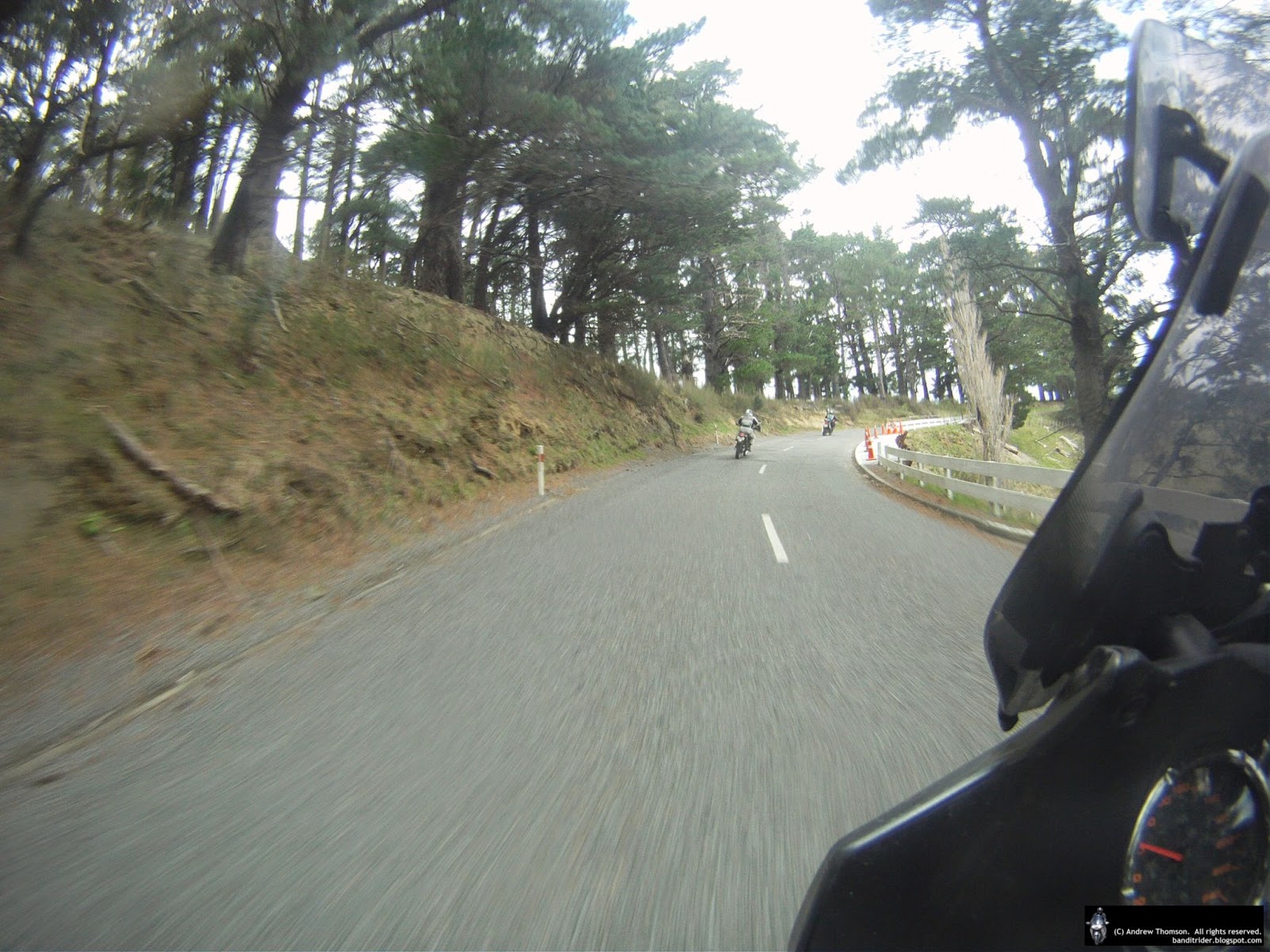 West of Wimbledon we turned off onto Esdaile Road.  I'd done this only once before (and in the opposite direction) but really like it as it's fairly open and quick.  This time around though there were roadworks and the road had recently had more metal put on it and been graded so there was little bit of surfing to be done in places.

We carried on up Coast Road and caught the rest of the guys waiting for us where Neil told us to carry on and doubled back to finally hook up with the lost sheep who had missed the Esdaile Road corner and gone the long way around to Akitio.

Apparently while the others were waiting on Coast Road they also had some excitement of their own when a car drove into the ditch near them (it was avoiding a ute coming the other way).  The crew soon had the car out of the ditch on it's way though.

Coast Road was fabulous as usual even if it too had possibly had a grader over it recently - more fast, fun gravel.  We then turned off onto Marainanga Road and then Spur Road.  On Spur Road we had some more excitement with two horses out on the Road.  One of them had a bit of sense and got well out of the way of us but the other one must have liked a race as it ran ahead of us for quite a while until we hit the next turn-off at Huia Road.

Huia Road and then Waihoki Valley Road's were more great gravel that eventually got us back out onto Route 52 again.  We then stopped at the Tiraumea Hall for a another regroup and to farewell some riders who needed to skedaddle for home.  The rest of us (probably still about 20) then made for the highlight of the day Puketoi Road. 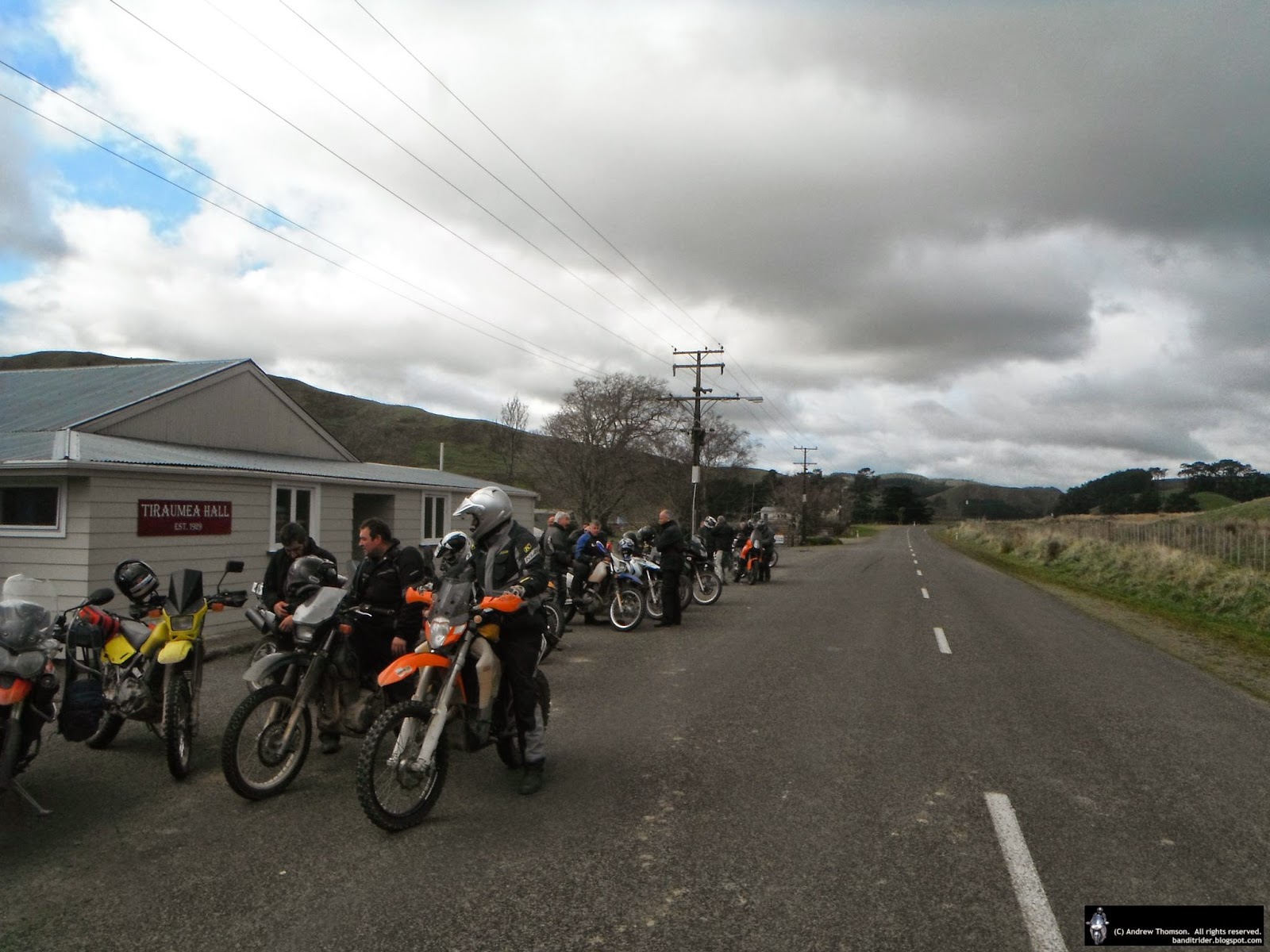 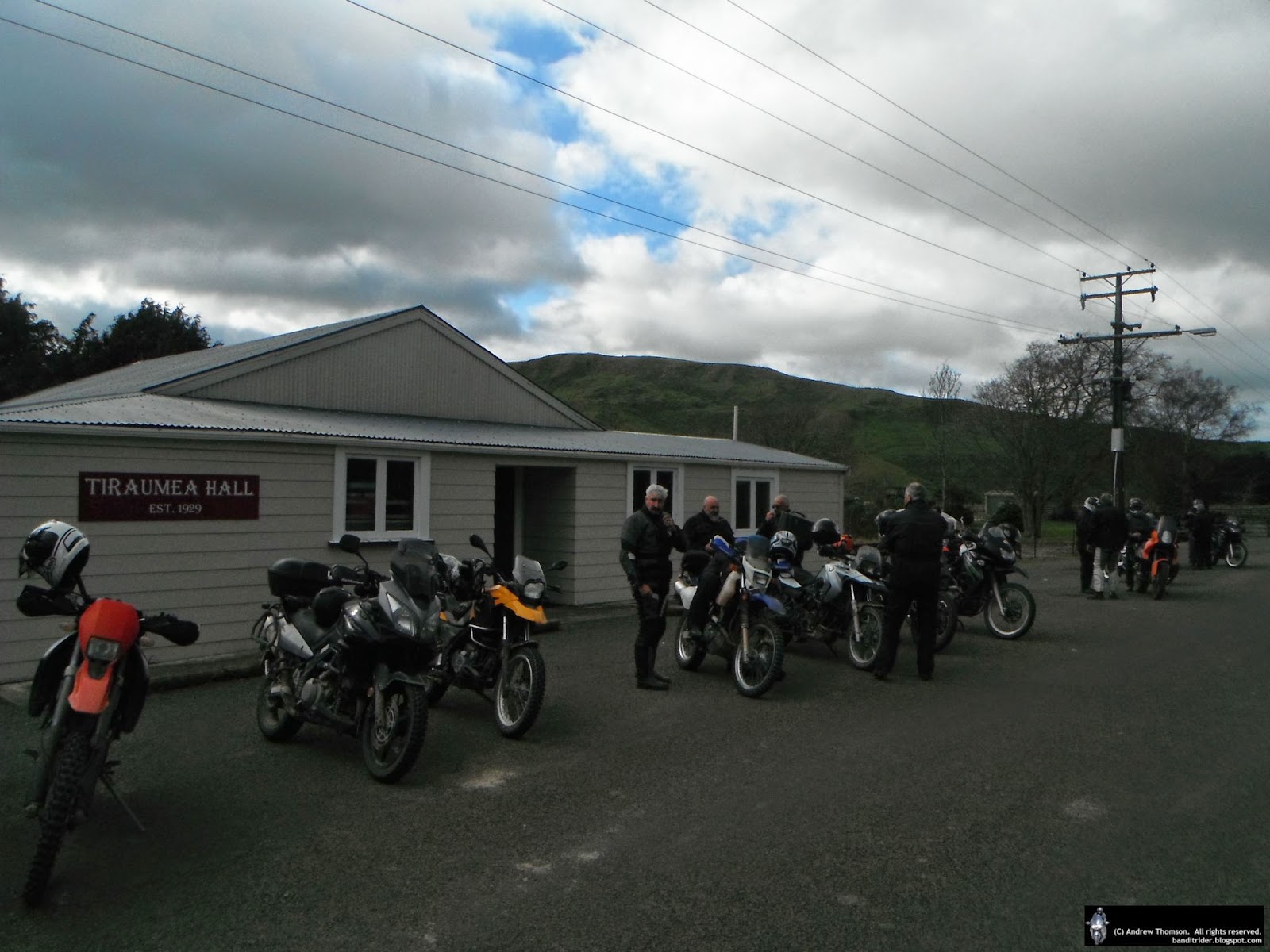 Puketoi Road is a paper road and can sometimes be in decidedly dodgy condition.  The very first time I rode it, it was a slippery mud hole filled road that claimed several bikes and was a real adventure to get through.

This time around it wasn't too bad although there was still the odd greasy patch and yes, it caught out a few of us - luckily I pottered through ok and kept things upright.  None of the other incidents were serious at all but a couple of the bikes (and some riders' gear) looked like they'd got their adventure.

Puketoi Road dumped us onto Pori Road which we took to Pahiatua-Pongaroa Road and back onto the seal for the rest of the ride into Pahiatua.  In Pahiatua we refuelled and then everyone took off in various directions for the ride home.  Neil tucked in behind me and we had a little play on the Pahiatua Track before he then went one way and I the other at the bottom.  One more great BRR ride in the bag! 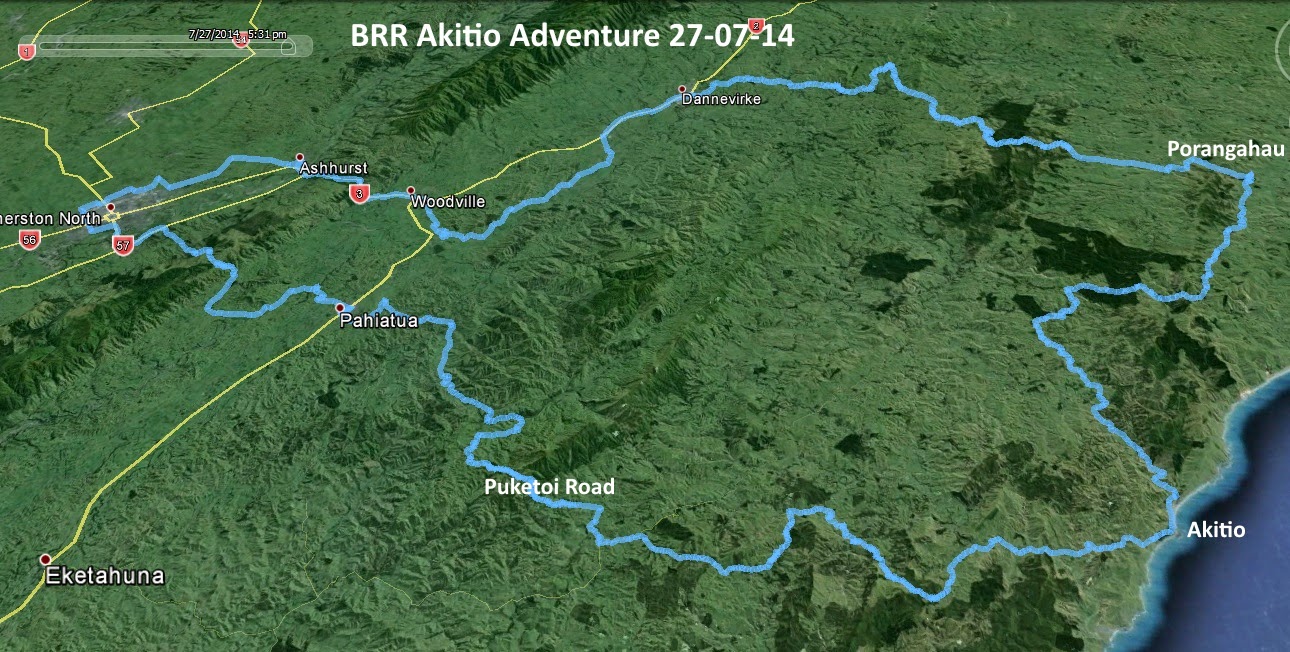