Sunday was our monthly Back Road Riders outing and man was it worth waiting for the last weekend of the month!

The weather was perhaps not quite as good as Saturday's (which was near perfect) but definitely not something worth complaining about considering we are supposed to be in the middle of winter.  I was up early for some stupid reason and so left home pretty early and ended up stopping by the old's place and persuading Dad to pop over to Marton (where we were meeting) for a quick pootle to check out some Adv hardware and the mad bunch that ride it.

When we arrived in Marton there was already a bunch of guys there gassing up and by the time Neil was ready to give us his serious ride briefing there were a staggering 24 riders (lots of new faces) and bikes! 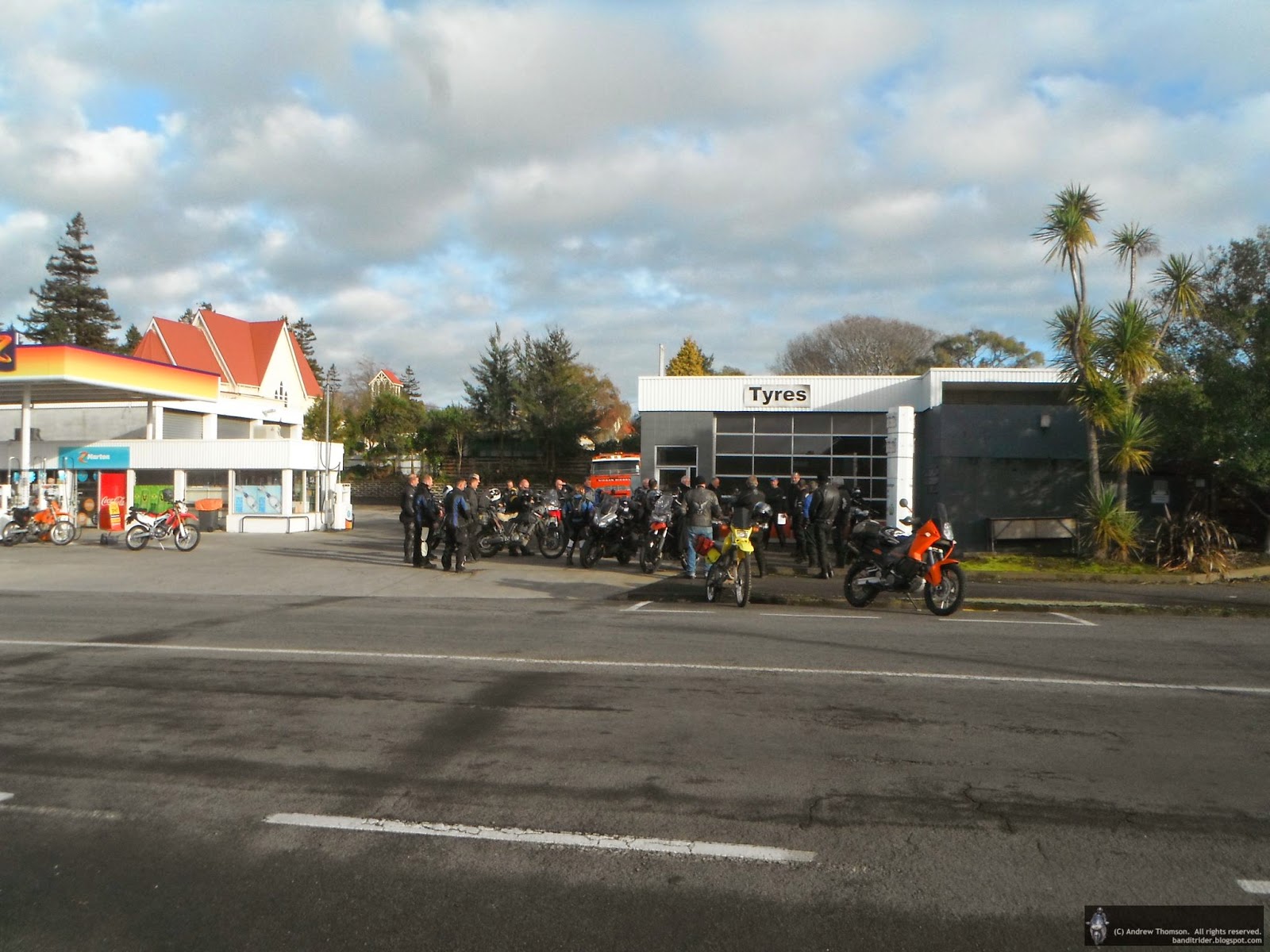 By 9:30 the lecture had been given and we mounted up for the first leg up to Taihape.

As you can see from the above I had mounted the GoPro in a nice position to snap shots of people tagging along behind the mighty Vee.  Unfortunately, GoPro weirdness meant I got a fraction of the pics I had planned...

After five minutes or so of tarmac we hit our first bit of gravel which took us over to Turakina Valley Road. 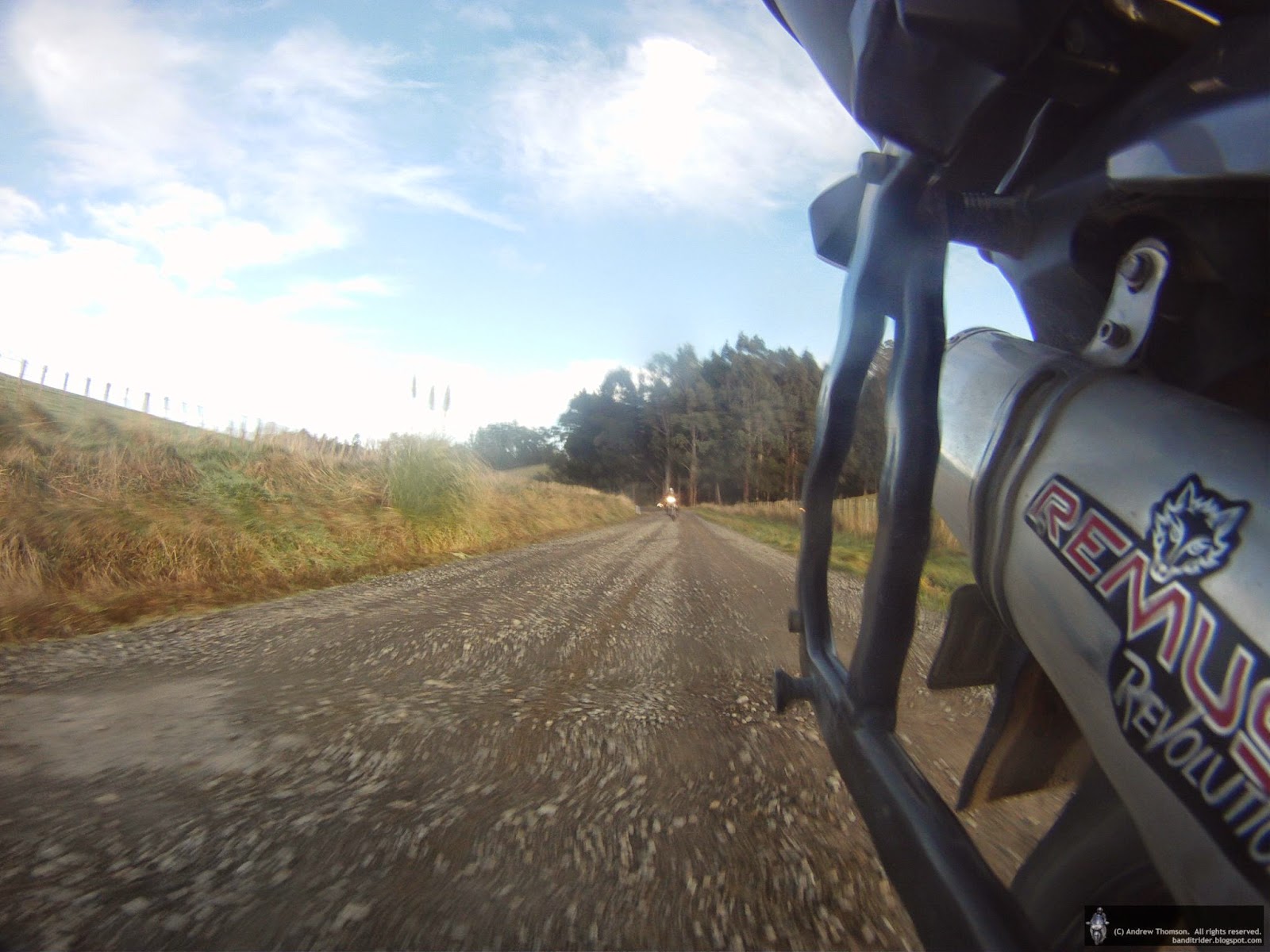 To say that Turakina Valley Road was in good nick is an understatement.  It was superb riding and at our first stop we found out that even our less experienced riders were coping really well and having a ball. 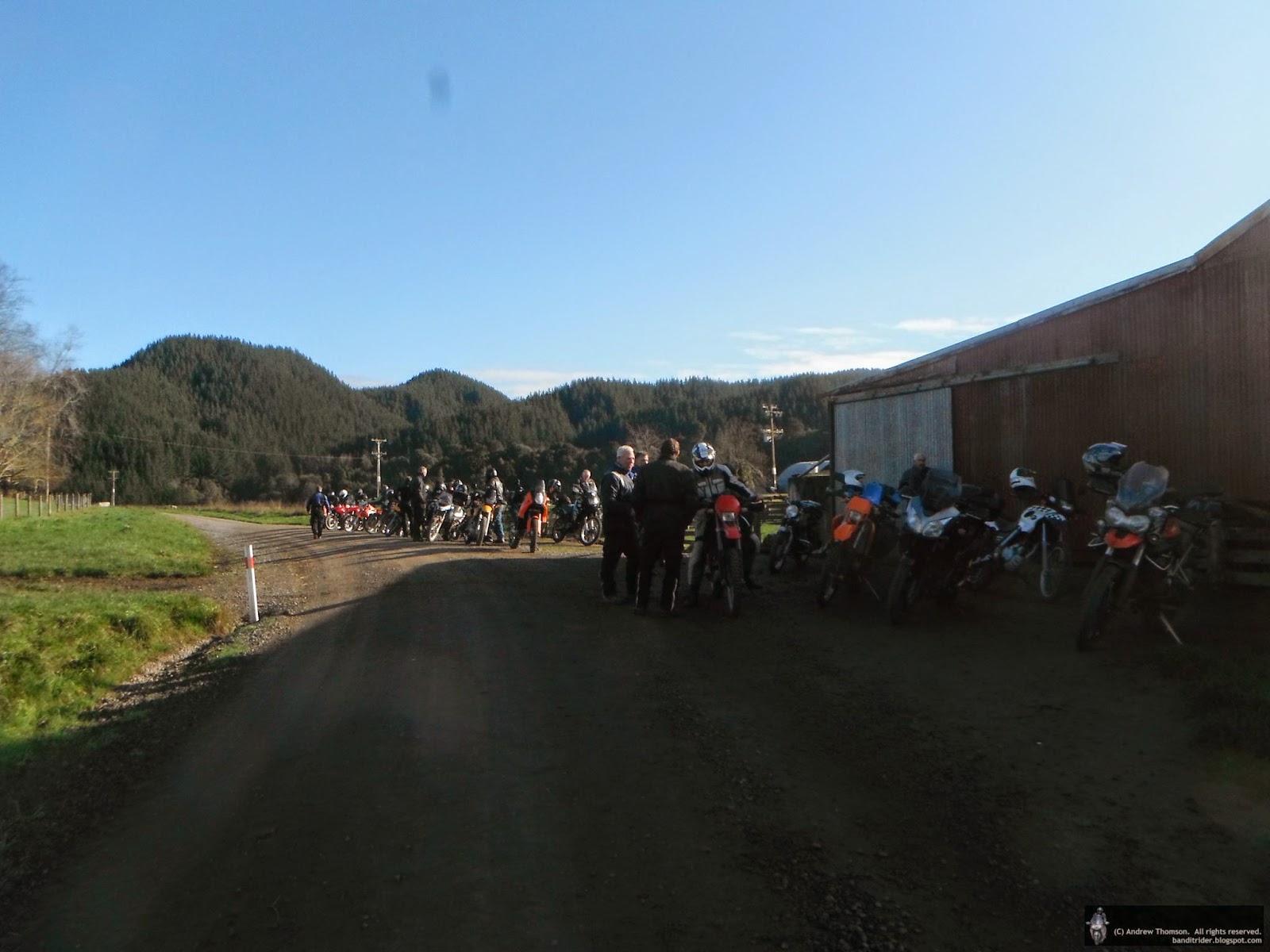 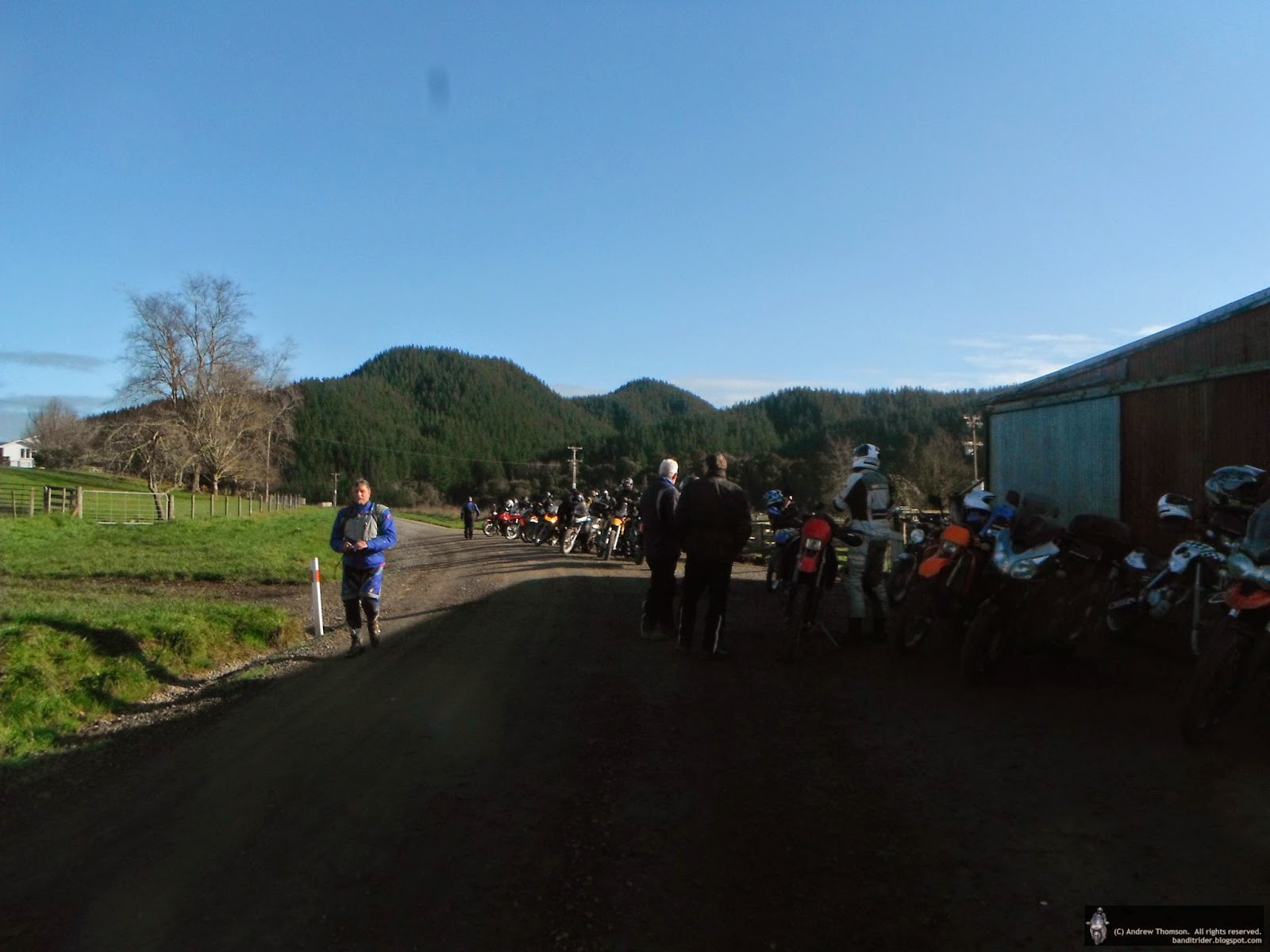 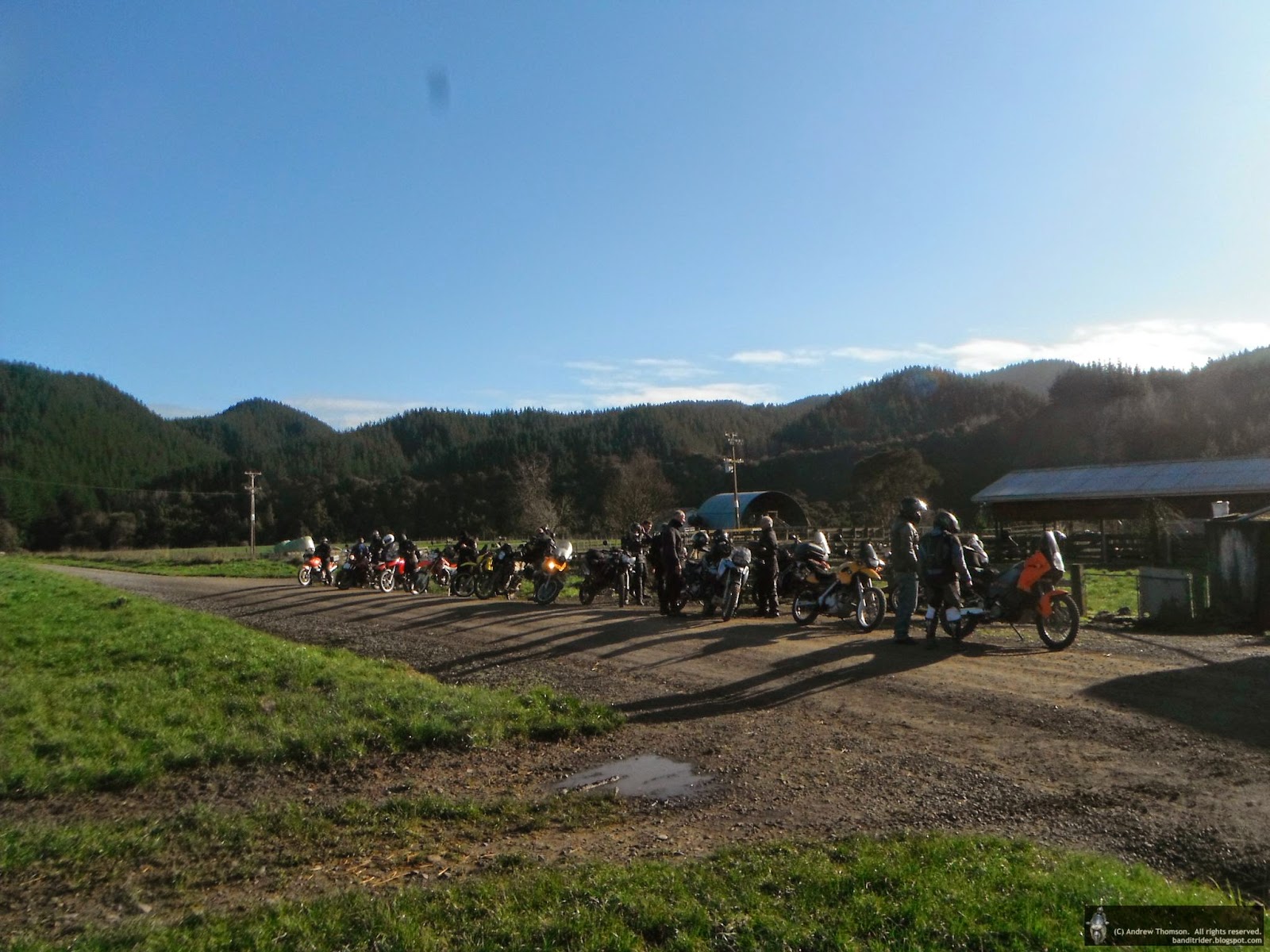 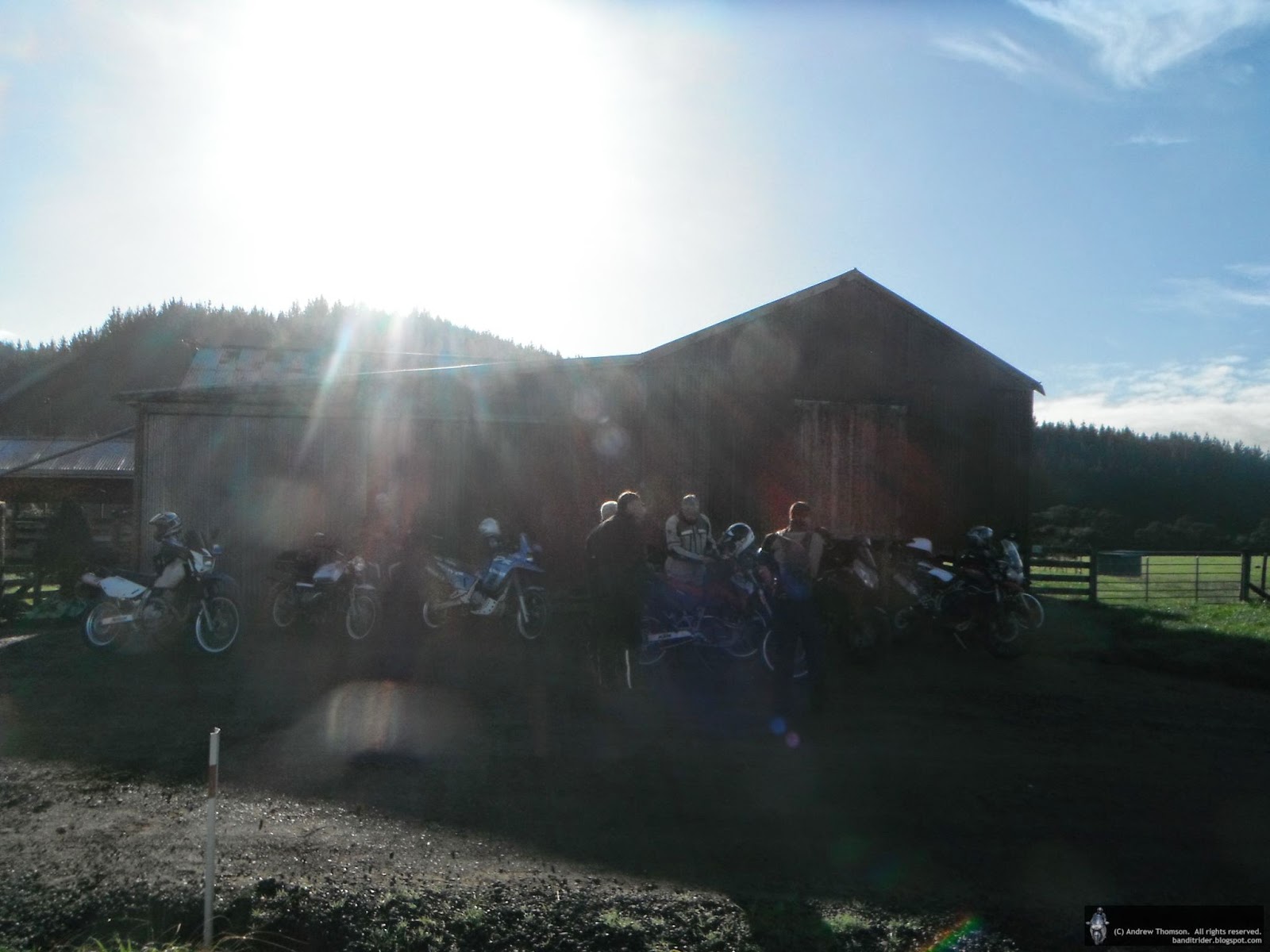 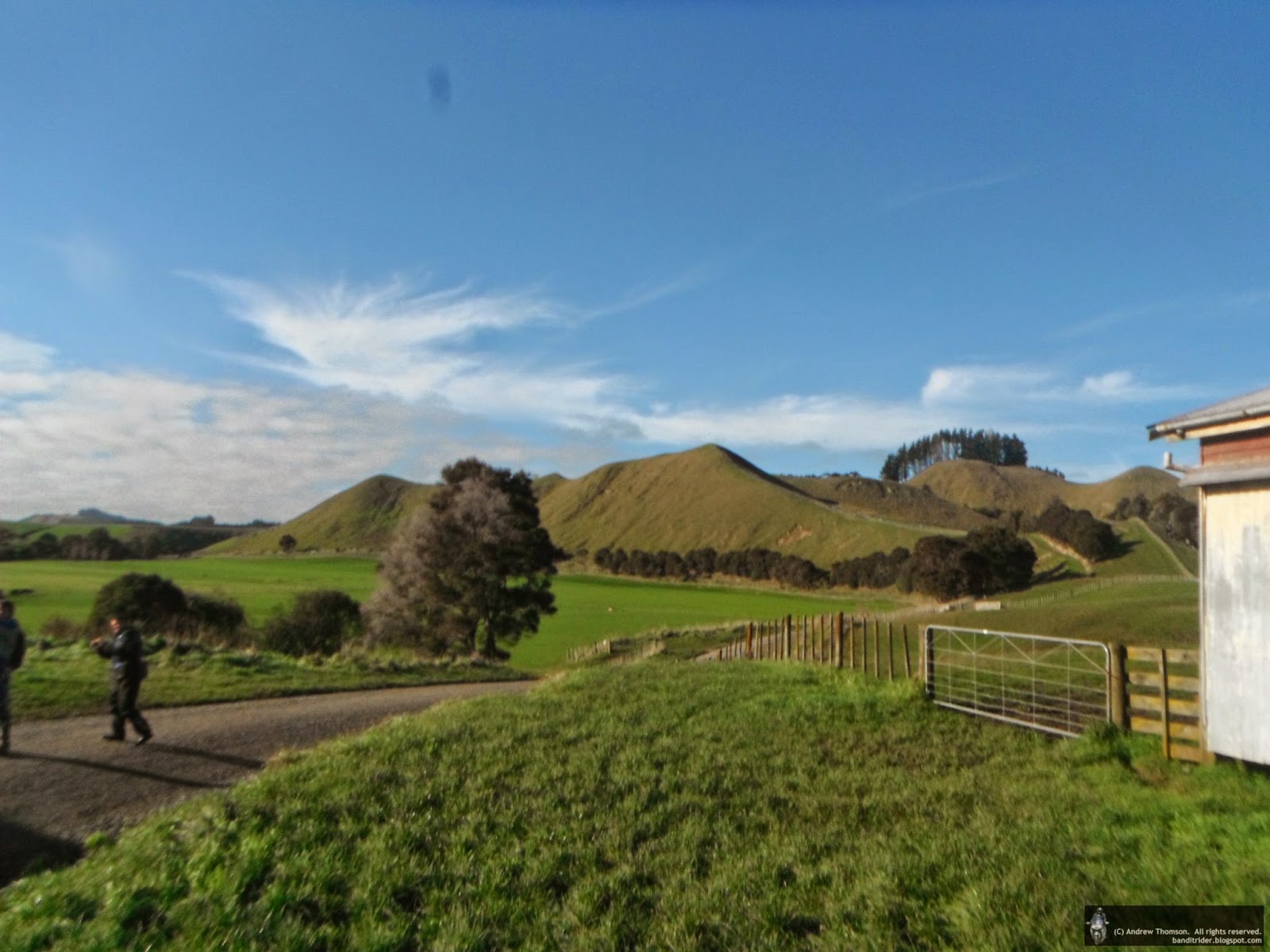 After a short break we were soon back into it and discovered that there was nothing wrong with the next section of gravel either.  Another short stop allowed us discuss this and other important adventure riding related topics (there is another name for this) - no need for details here. 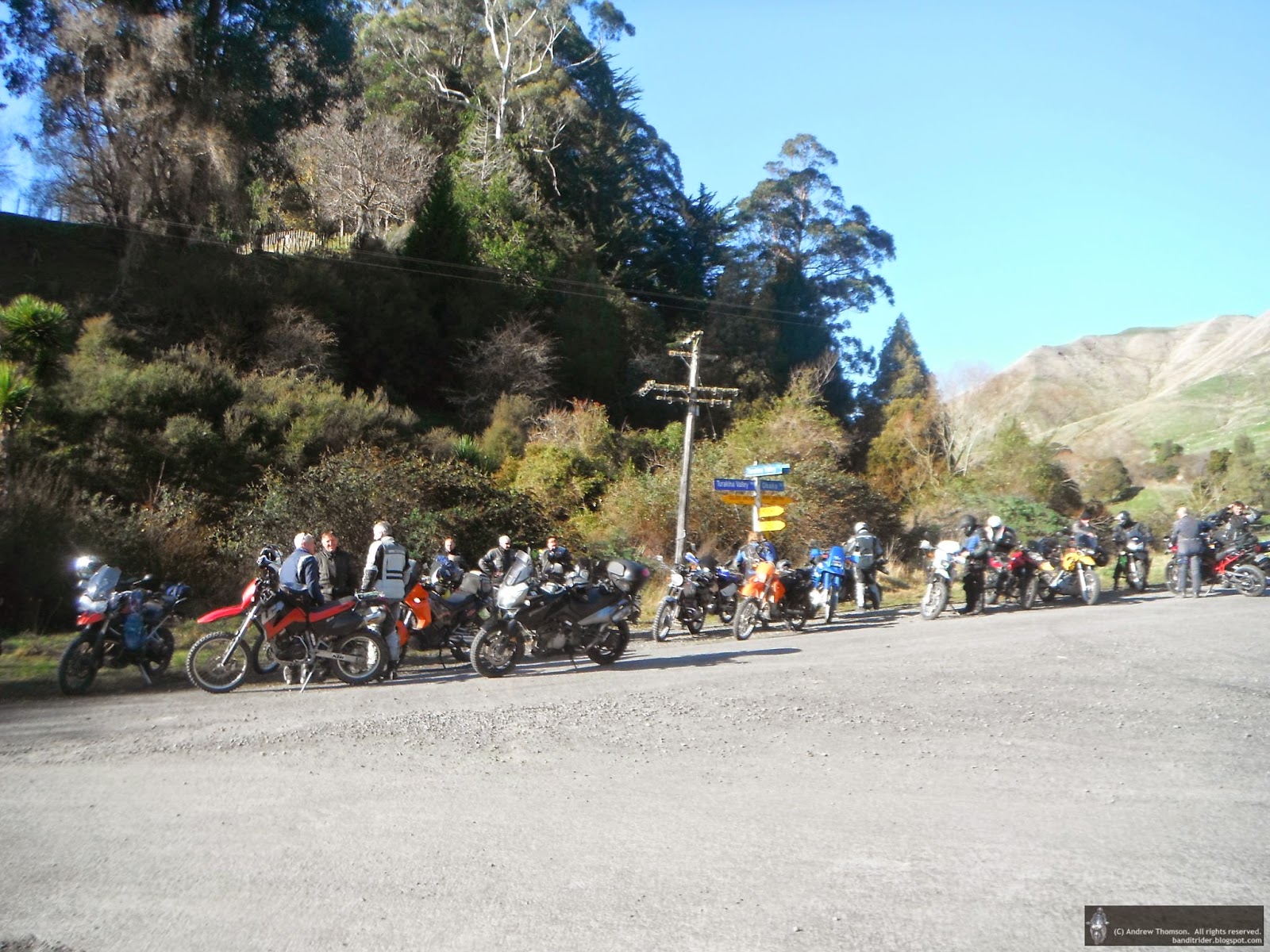 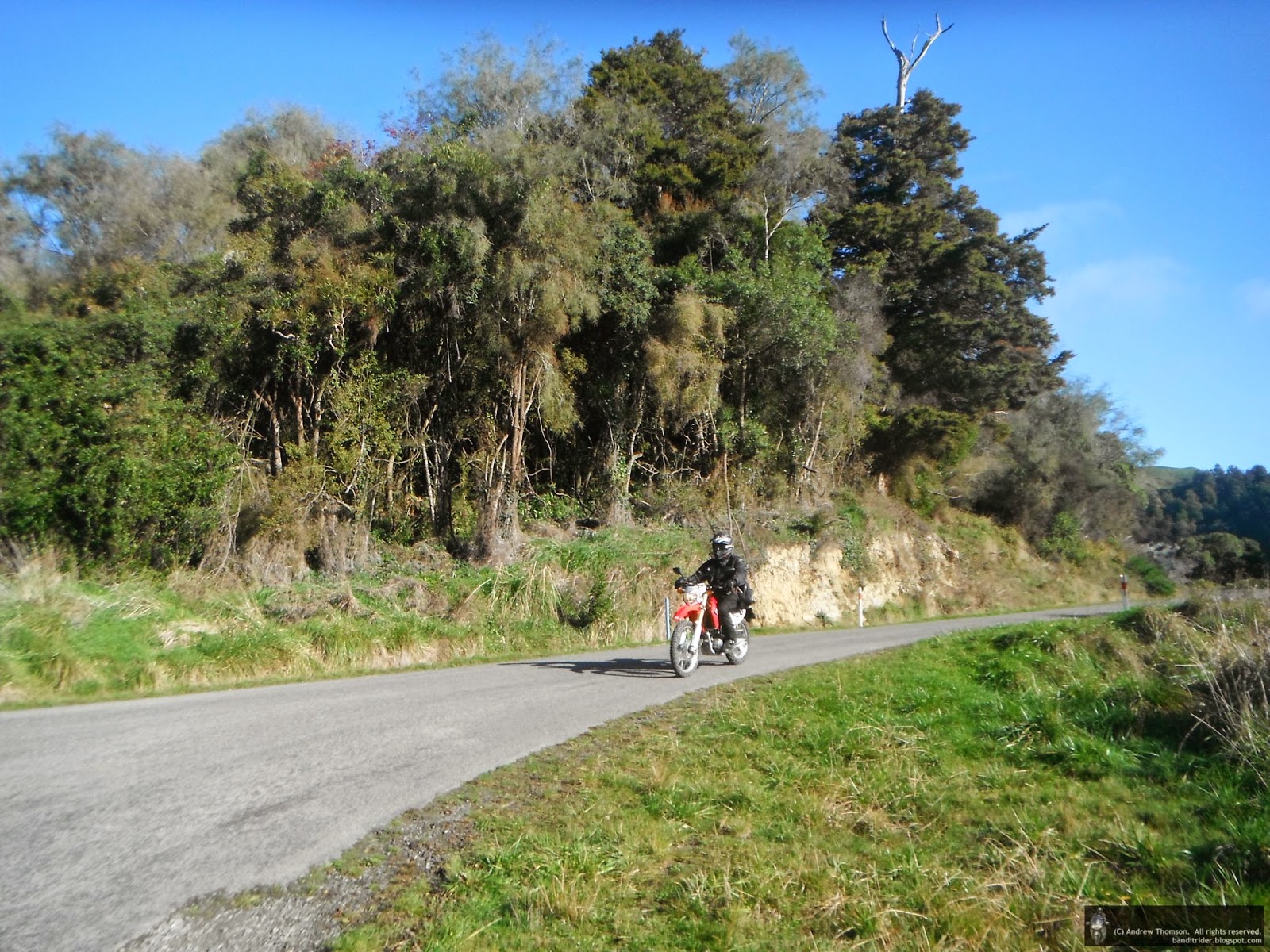 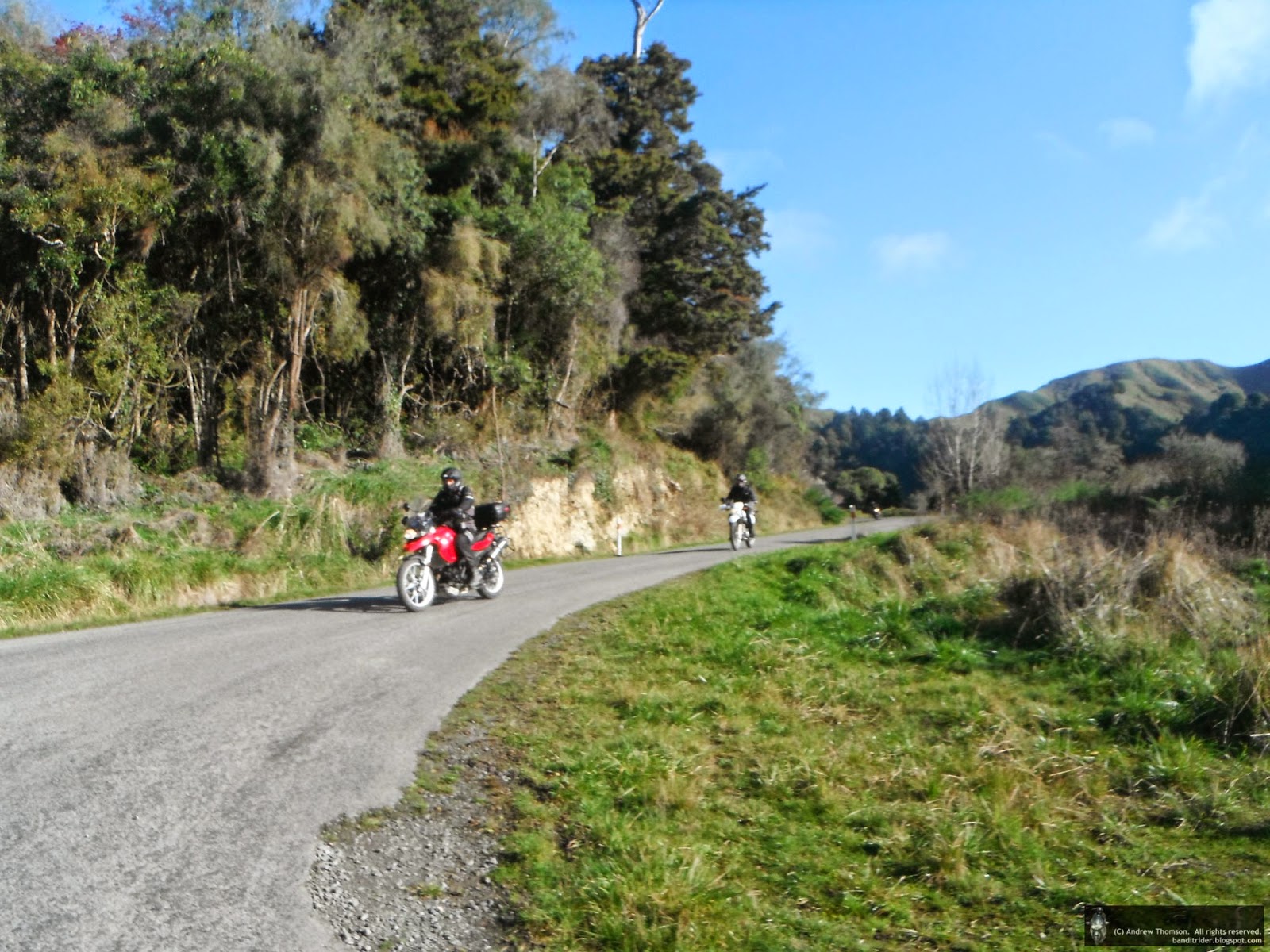 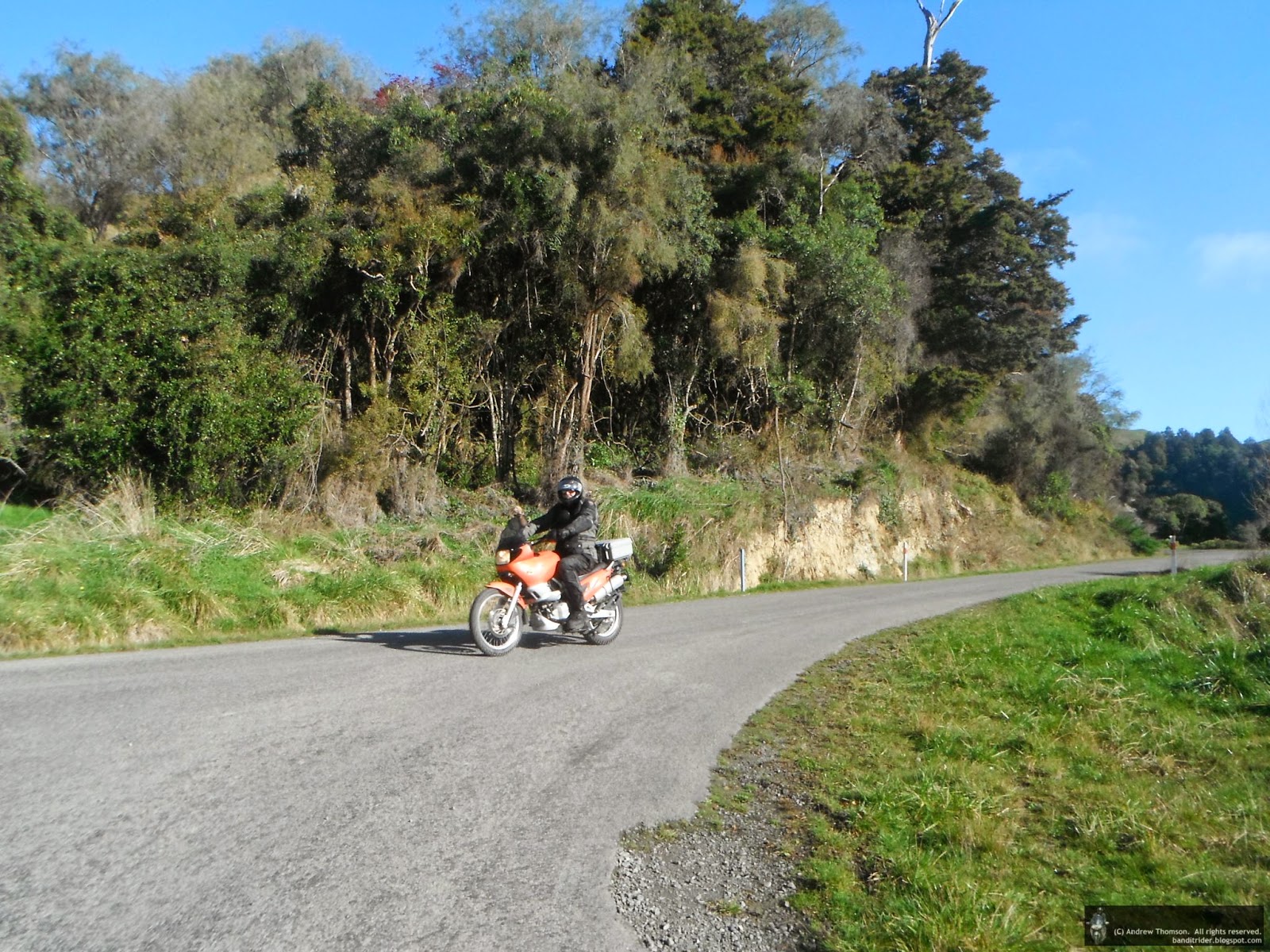 After this important delay we carried on up Turakina Valley Road eventually hitting tarmac and then turning towards SH1 on Ruanui Road.  This was sealed as well although in places there was plenty slippery stuff that had been left behind by farmers moving stock on the road.  Some of this stuff proved too inviting to a DR and it decided to lie down and roll around in it (I've seen dogs do this too).  Luckily both the DR and rider got over this little problem and were soon on their way again.

We then turned North on SH1 for a couple of minutes and the GoPro managed to catch a pic of this very important sign: 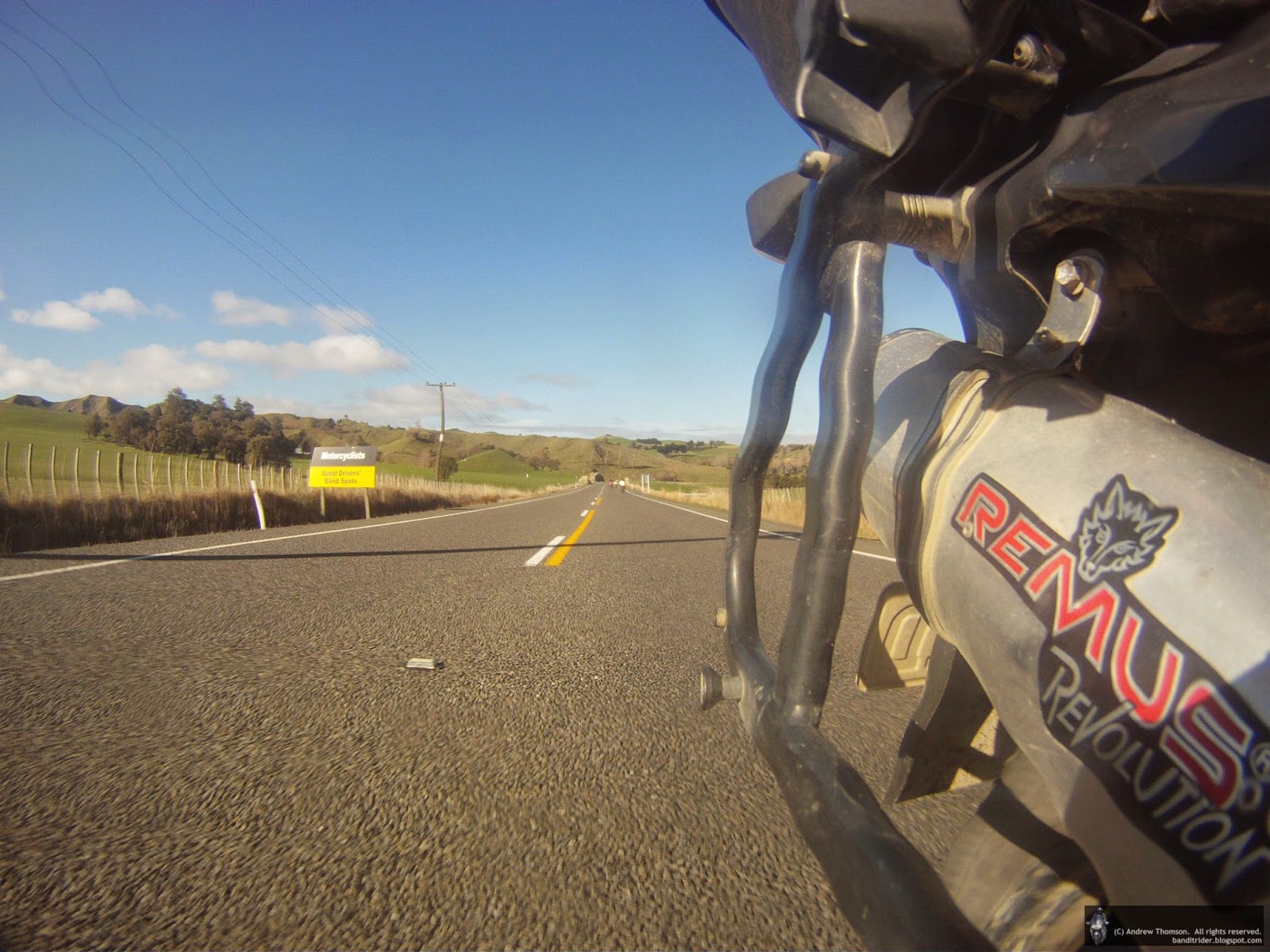 Our next piece of fast gravel was Paengaroa Road which got us onto a section of the Napier-Taihape road for a while before we turned off yet again to find some more gravel on Moawhango Valley Road.  These diversions took us on a little loop which eventually led us into Taihape for our lunch stop where 24 hungry bikers made the cafe's day...

After lunch and fuel for some of the bikes we rode North out of Taihape for a couple of km before turning onto a fairly familiar Pukenaua Road.  We've done this a number of times and it takes you up a really next climb (see video) and after a turn onto Ridge Road down to a little settlement at Mataroa.  Ridge Road was in better nick than last time (less deep gravel) but it still caught out a sleepy Triumph...


A few windy sealed roads found us on Pohonui Road and some more lovely gravel.  It was that much fun we had to stop to chat about it. 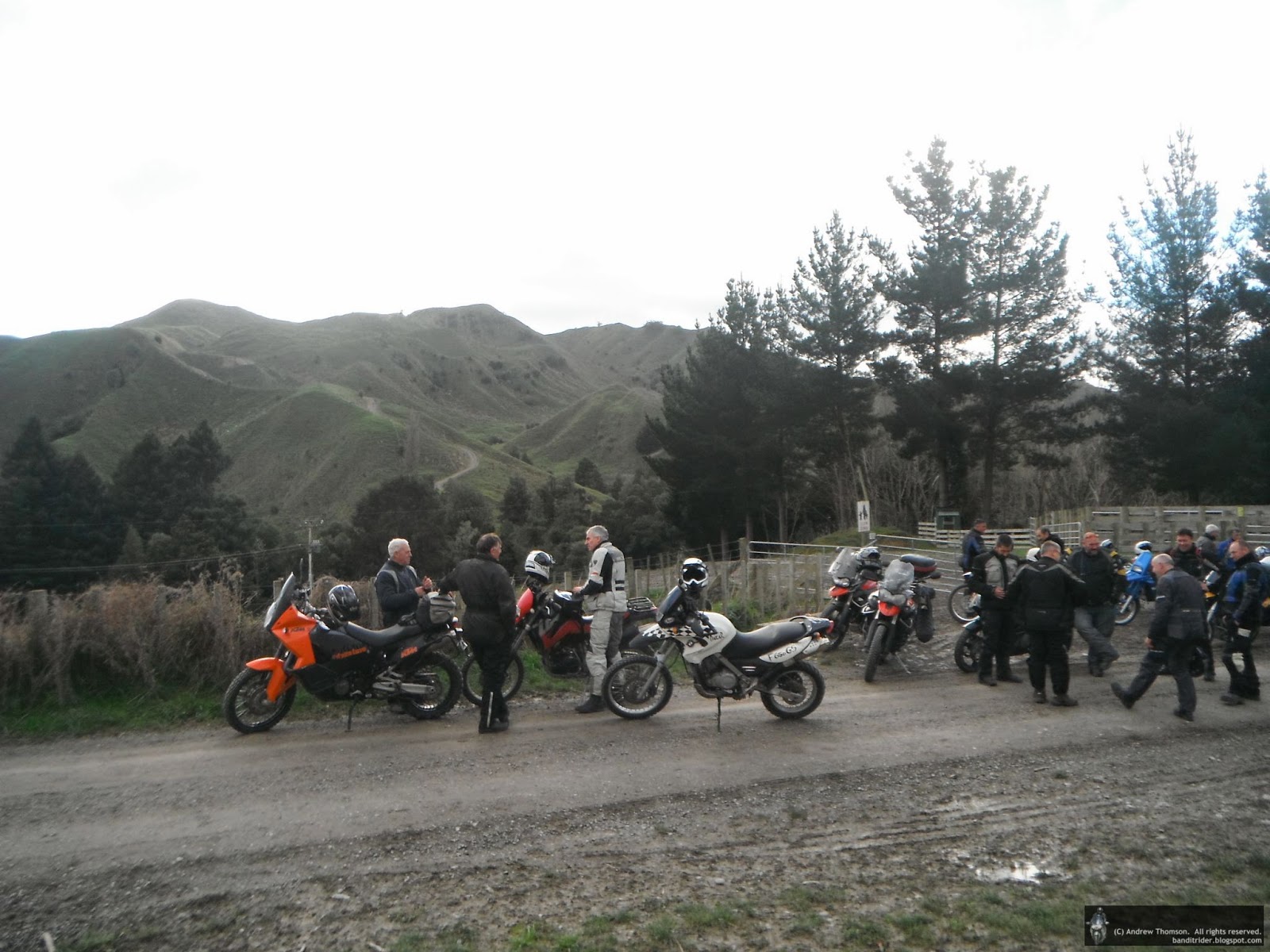 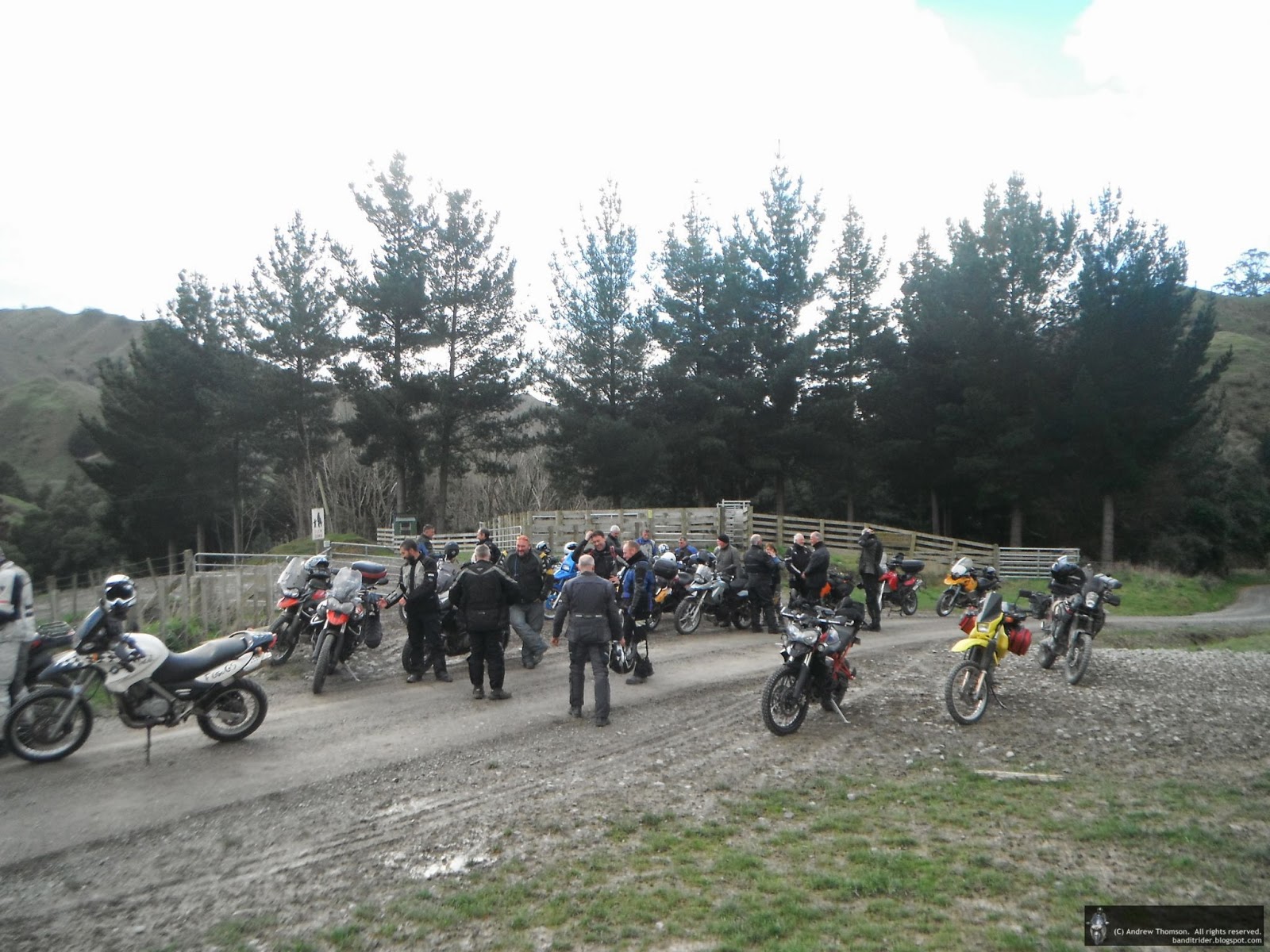 Unluckily Pohonui Road eventually comes to end, but luckily the end is Turakina Valley Road so we were forced to retrace our steps a little on what is becoming one of our favourite roads.  A short section of Turakina Valley road got us to our next turn-off onto Ongo Road.  The video below shows snippets from all three of these great bits of gravel.


Ongo Road eventually turns into tarmac and we had a reasonably spirited ride (watch out for the bull on the road) ride into Hunterville where it was time for coffee and to end a great day's gravel exploration. 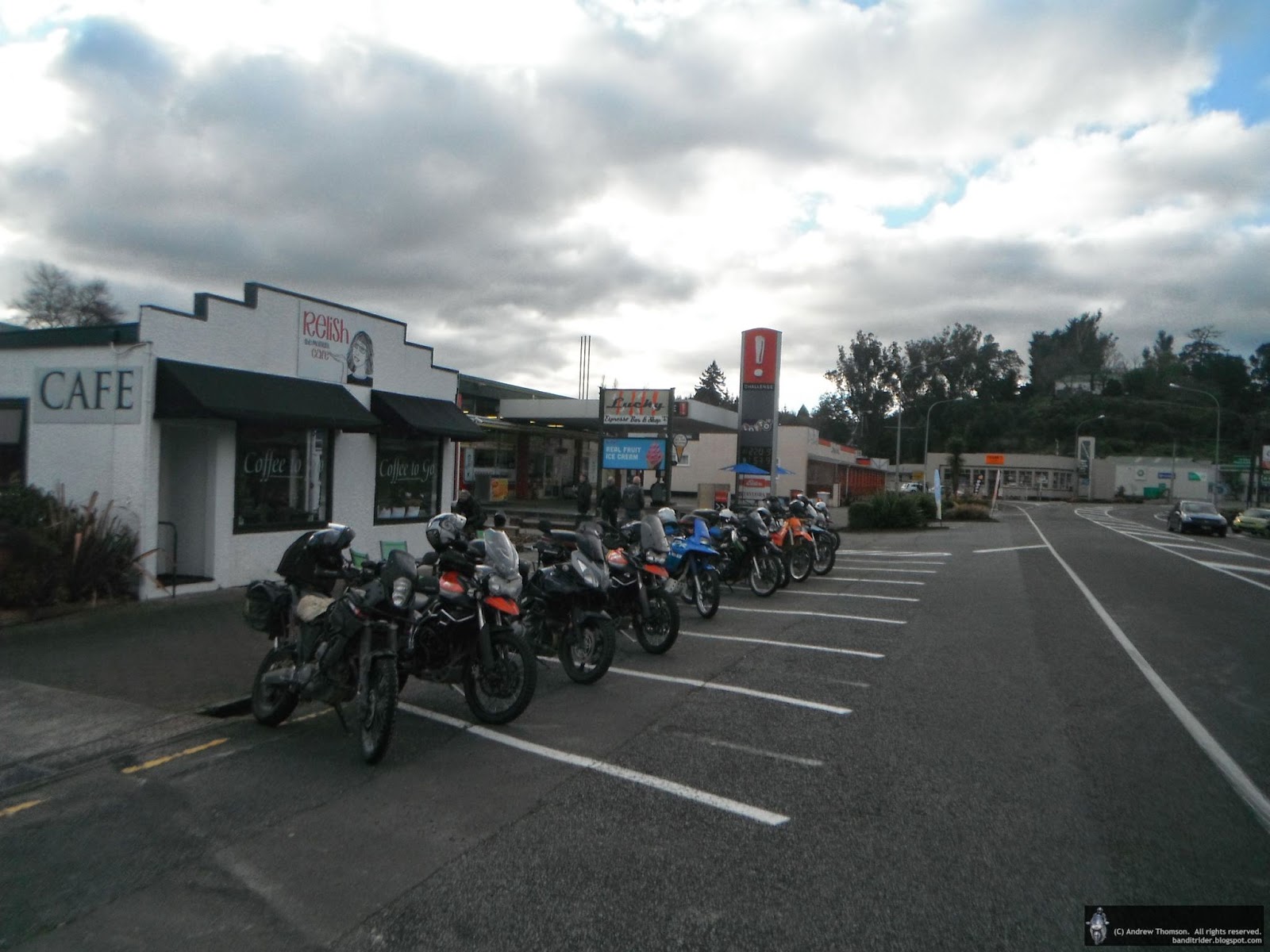 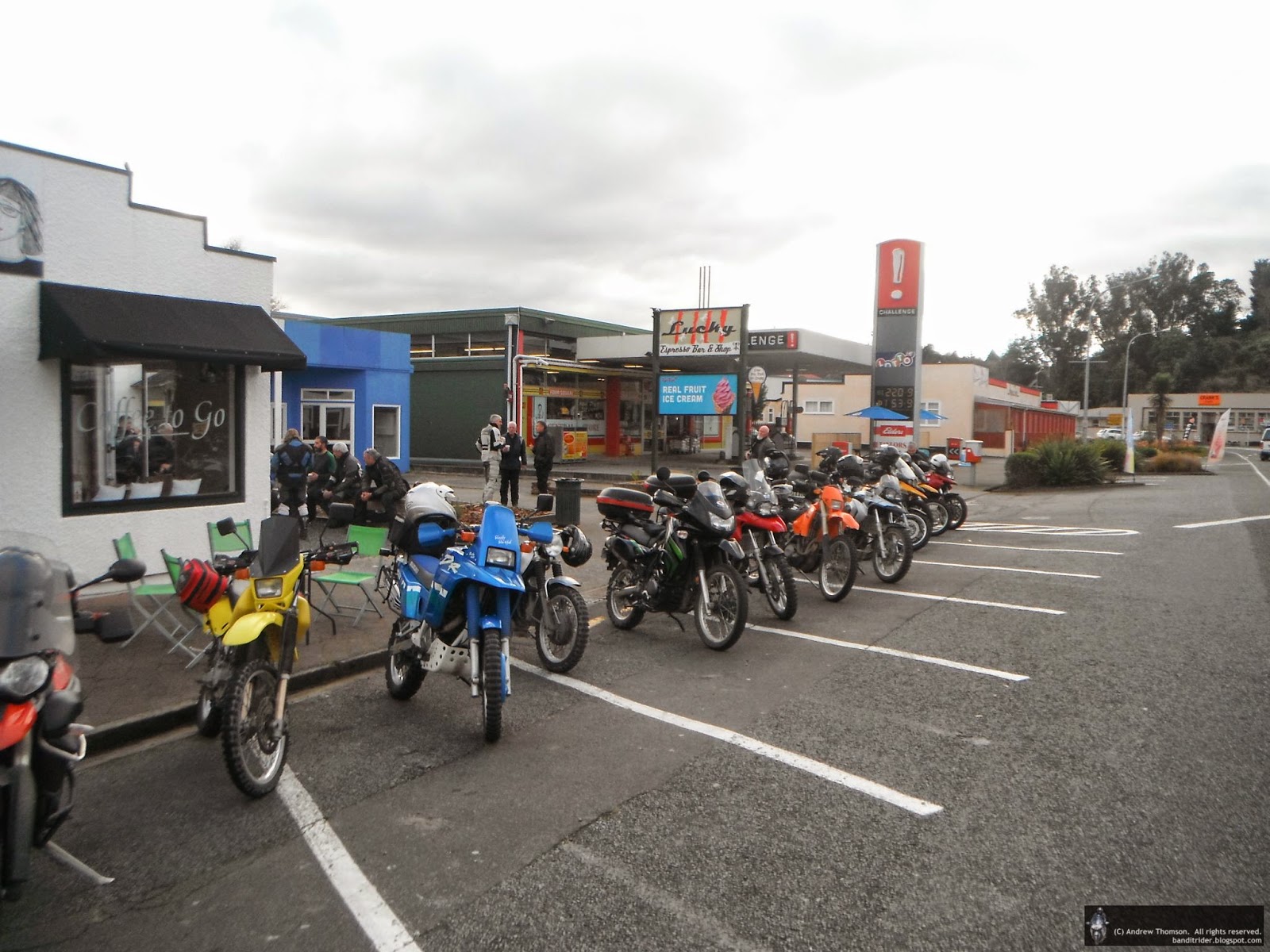 After our coffees and the usual low-key debrief riders started disappearing off in different directions to find their way home.  I opted to take in Vinegar Hill and had it pretty much to myself.  After a quick stop for fuel (not sure why but I seemed to use a bit of fuel on this ride) in Feilding I got home just before 4:30 after another superb BRR ride!  A month is a long time to wait...