It really sucks having the week off.  So far I've spent far too much money - some on stuff I need and some on stuff I could have done without.  Today's purchase was new Adventure jacket and pants.  For a while I've made do with old road riding gear but it's getting a bit past it and definitely not keeping me as warm and dry as I'd like.

With the gear bought it seemed only right that I give it a decent test.  The weather was pretty average so I thought what better way to find out if it's any good?  I also had in the back of my mind that I'd like to go get some pictures of the V-strom in the snow and with the Napier-Taihape road closed due to snow then I figured that might be a good place to start looking for the white stuff.

I didn't get away from home until about 12:30 so I knew before I left that I couldn't muck around and was probably going to get home pretty late.  Leaving home I made my way over to Fielding where I fuelled the bike and then made for Vinegar Hill.  The road over the hill was a bit damp but there was little traffic and I had a nice little ride through to SH1.

When I hit Mangaweka the gear testing began in earnest as I caught up with the weather and was soon sloshing around in fairly wet conditions.  The old heated grips went up another notch too.  I turned off the main road and rode through towards Gravity Canyon but at Taoroa Junction I turned left to start to make my way North again.

At the next intersection I was pretty sure that I wanted to go right and did so but almost immediately wondered if I had got it right.  This was only the second time I'd ridden Pukeokahu Road in this direction (the first being quite some time ago) and I thought I recognised some areas but not others...

The gravel wasn't too bad going although the rain made visibility a bit of an issue so I didn't push it.  As I climbed higher up into the valley I started seeing my first signs of snow and ice on the side of the road and in paddocks so at least one part of mission was looking good.

Eventually I popped out exactly where I wanted to be on Pukeokahu so I had managed to navigate myself to where I wanted to be after all.  Riding up past the school I saw my first sign saying that the Napier-Taihape road was closed.  Naturally I carried on and was soon onto the gravel again.

By now I was on Matawhero Road and heading into the Rangitikei Valley.  This is the area where Neil and I had so much fun on the "Taming the Tiger" ride.  Today was a little different as visibility wasn't the best with rain on both sides of the visor and some foggy patches too.  It was still a lot of fun and soon I was in areas where there was quite a bit of snow which made for a nice view. 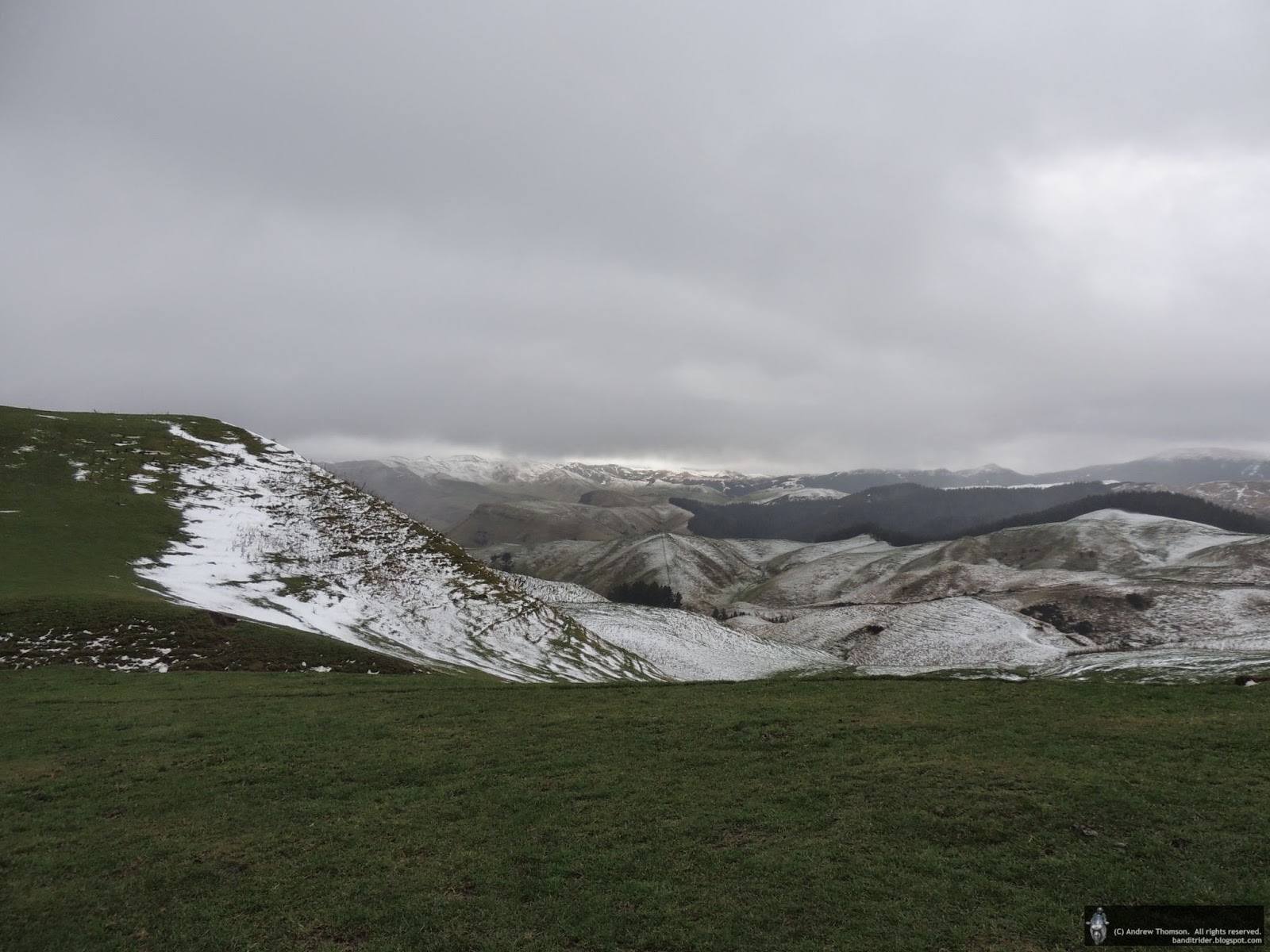 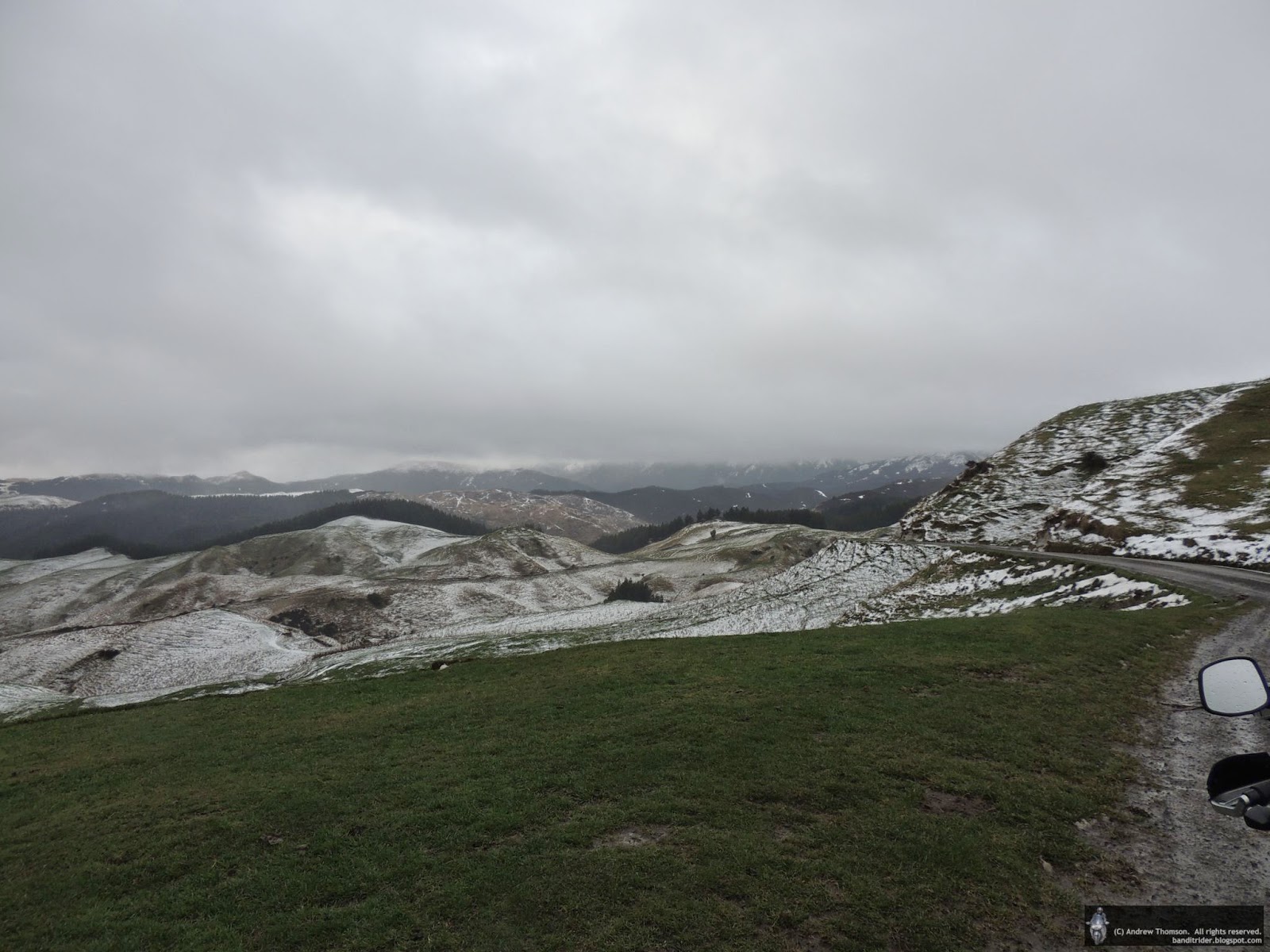 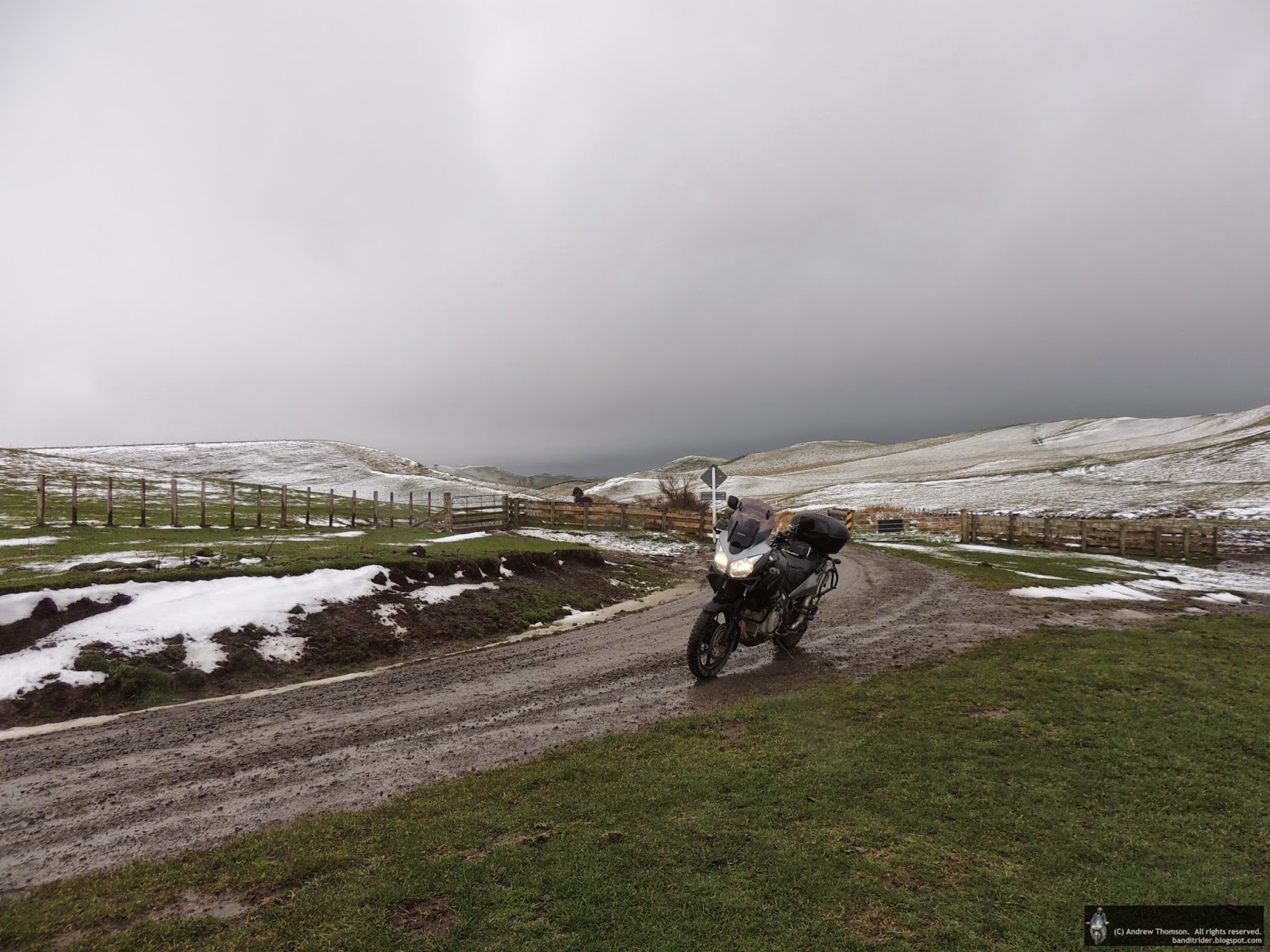 The rest of the ride up to the Taihape road was just as good and when the rain stopped it was even better.  The closer I got to the top of the hill the more snow there was but the roads were still fine and I was still nice and warm so all was good in the world. 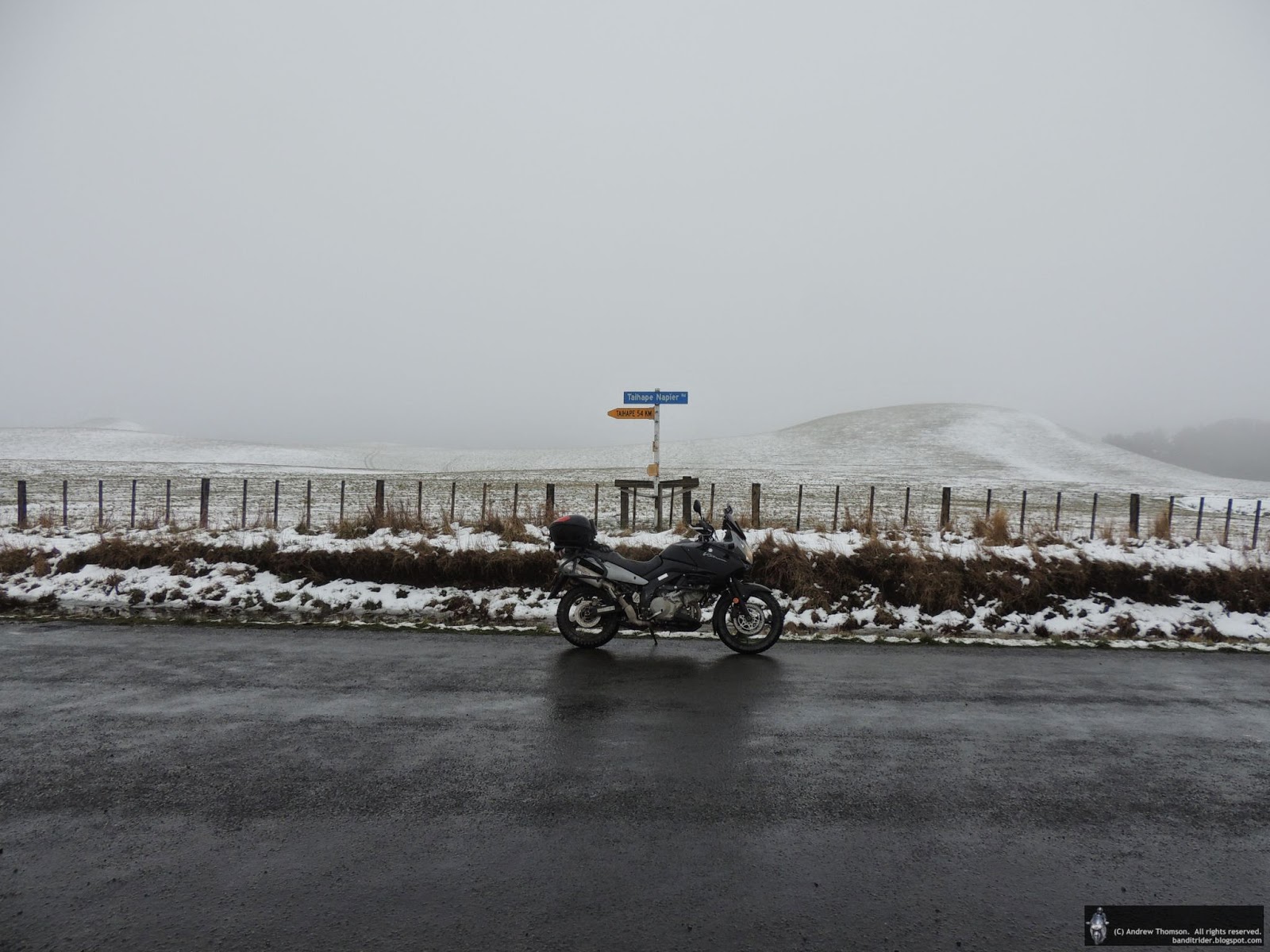 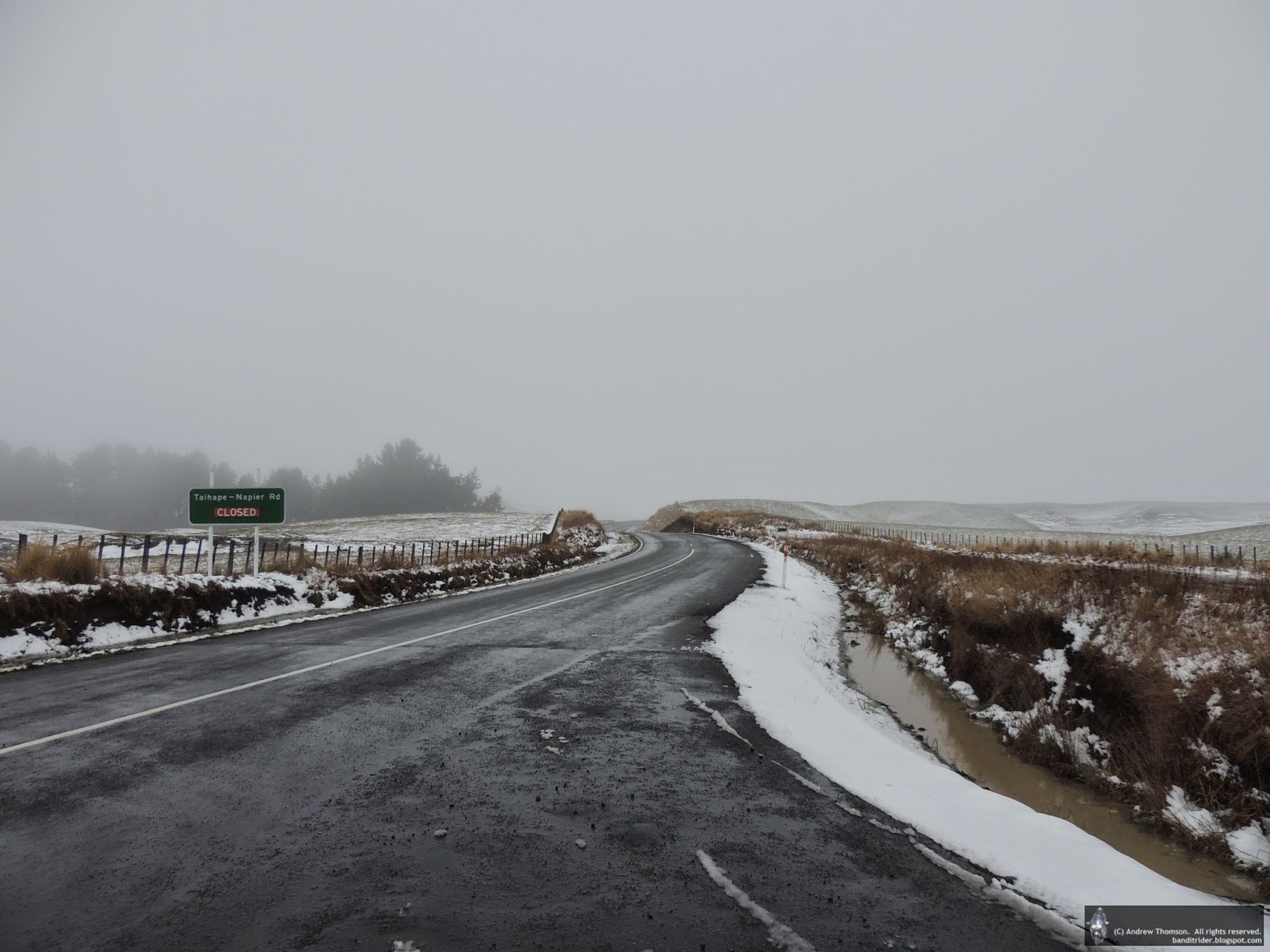 Photos taken it was time to turn around and retrace my steps - I decided to stick to the gravel rather than riding back on the sealed Napier-Taihape just in case the road was icy.  I also had a lot of fun coming back and it didn't seem to take me too long to get back to Pukeokahu.


By now it was getting on a bit and my gloves were pretty wet so I decided to take the sealed route back into Taihape - no issues with ice on this bit as it was raining again...

Rather than stop in Taihape for a hot drink like a normal person would, I decided to put the peddle to the metal and hot foot it for home.  It was fairly wet all the way through to Ohingaiti where it finally cleared up.  Once again Vinegar Hill was damp but fun and a flashing fuel warning had me duck into the same Feilding petrol station again before the final 20km home.

I got in just after 5pm which wasn't too bad considering a decent ride of about 300km including a lot if gravel - in fact the GPS reckons I averaged 70km/h so I'm very happy with that!  It was nice to get out of my gear and get the fire going though... 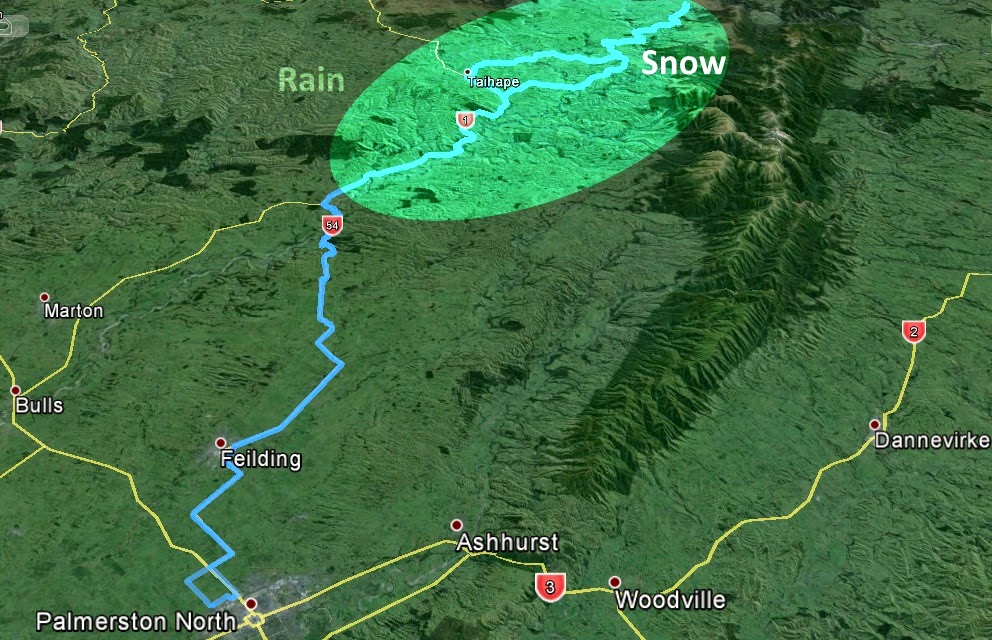