A few weeks ago I stumbled upon an event on Facebook that immediately caught my attention as it had the words "adventure" in the title and there were pictures of motorcycles on the page...

Fast forward to Sunday and I was up early to give the dog a very quick walk, load the Tenere up and meet up with another local rider who I'd never met before and then making my towards the meet up point.  Rodney was the local on his F650 and the meet up point for us was at the bottom of Admiral Hill in the Wairarapa - the rest of the riders were meeting in Wellington and riding up from there.

Rodney and I met up early so that we could take our time riding the 120-130 odd km to Admiral Hill and take in some other gravel roads on the way down.

The ride over the track started off pretty good on the damp roads but on the descent there was a huge diesel slick all over our side of the road.  I'm not sure how Rodney got on but I know that I slithered around a few times on the stuff!

Riding around Nikau Road towards Mangamire my phone started ringing and when I answered (while trying to stay on the road) it was Colin L and after telling him what I was up to he decided that he was going to join up with the Wellington tribe and tag along too.

Before Mangamire I turned off to take Rodney down Kopikopiko Road - he hadn't ridden it before and I was reasonably confident that it was in good nick having just ridden it a couple of weeks previously.  As it turned out, a fortnight can make a difference.  It was still in pretty good condition but there had obviously been a fair bit of rain over the last week while so it was a little softer in places.  Still great fun though and I particularly enjoyed the quick squirt along Quarry Road where there was a little sideways action to be had.

Also during this stretch another interesting sight greeted me as I came around a right hander - a farmer exercising a St Bernard on his quad (the farmer was on the quad, the dog doing the running).  The big old boy had a bit of a gangly gait but he was getting along pretty nicely and having fun.  A couple of bikes added to his excitement and I certainly didn't want to hit him - the Tenere might have got damaged...

Warm up complete, we were back on SH2 for a short stretch before I turned off again to take my normal (sealed) diversion through Mauriceville before popping back out onto 2 again and the short cruise into Masterton.

In Masterton we stopped briefly for gas and then as we were still very early (the gravel only cost us around 15 minutes according to the GPS) we went in search of coffee.

Rodney and I ended up yarning in the sun for quite a while before finally departing to make our way down to Admiral Hill.  This was just ten minutes down the road and it was pretty uneventful for me although apparently a mufti cop waved a finger at Rodney - those beemers must go pretty quick when chasing down Yamahas...

We parked up at the bottom of Admiral Road and set about waiting for the others.  And then we waited some more...They were a long time coming and we were starting to get a bit worried that we'd gone to the wrong end of Admiral Road or something.  Oh well, at least it wasn't cold and we could laze around listening to someone trying to kick-start a reluctant farm bike...they even managed to get it going while we were there after probably wearing out a fair bit of patience.

The first of the Wellington mod arrived around 11:30 or so and didn't even stop, he just gunned his KTM off up the hill leaving a corner man to point the stragglers up the hill.  Rodney and I quickly donned our gear and tore off after the group.  We needn't have hurried as after the quick squirt up the winding (but still tarseal) road the group stopped at the top to regroup and I got to say gidday to Colin on another shiny new Beemer.

Dropping down the other side of the hill we turned off onto Clifton Grove road and our first bit of gravel.  There was a little bit of traffic on this stretch and the fast guys soon got away a little while everyone settled into their own comfortable gravel pace.

The road surface was pretty good until we dropped down into the valley where we started to encounter the odd muddy/slippery bit.

Our next turn-off was onto Wainuioru Road which sent us clambering back up into the hills on more sometimes muddy roads.


At the top of the hill we pulled over at the airstrip to regroup and checkout the views. 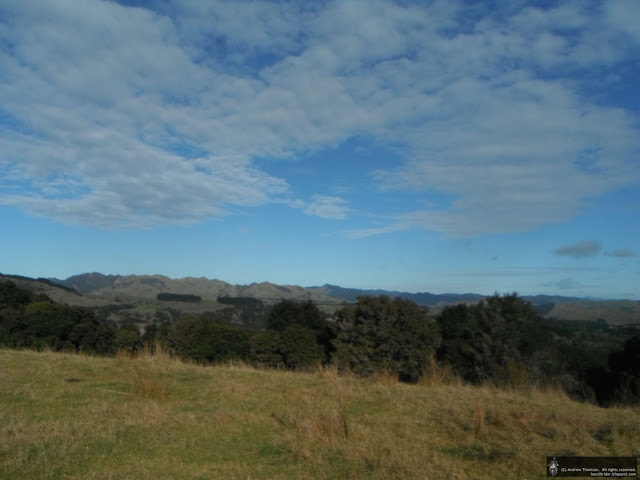 From the airstrip we got to drop down the other side of the hill before the road levelled out, changed names and spat us out at Hinakura.  The gravel roads seemed to get better the further we went too...


After another regroup it was time to turn for the coast and take in the fantastic bit of fast gravel that is Pahaoa Road.  The road had a bit of everything with some tighter sections, a small ford and some nice, fast flowing gravel - not much fun at all...


At the coast we disturbed the locals (there were a number of horses not amused with our arrival) and were entertained by a Husky getting stuck, a DR-Z falling over and some big KTM's trying to fly. 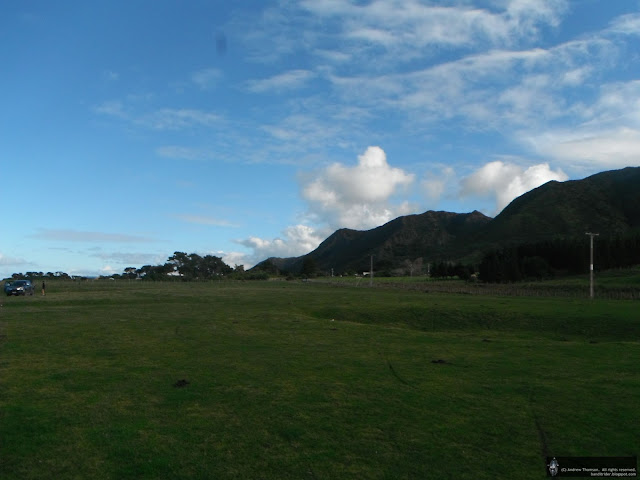 As it turned out we'd come to a dead end so were forced to turn around and make our way back to Hinakura the same way we'd come in - bummer!

From Hinakura we then made our way back to Martinborough for lunch.  This involved a heated scramble up over sealed roads with the odd damp and slippery corner and a cruise into Martinborough where the rain was just beginning to fall.

A later lunch was had by all before people slowly started departing to make their way home.  Rodney and I saddled up after discussing whether to take any "alternate" routes home.  As it was raining quite heavily I decided that I'd wait and see if the weather cleared before throwing in any diversions and Rodney seemed cool with that.

Just to show that it really was raining, I took the below video and in it you can see what happens when people push their luck a little too far in wet conditions...


The rain remained fairly heavy through to Masterton where I even got to splash through a big puddle to clean off the underneath of the bike but further North there was the odd fine patch - the bike was telling me it was 11 degrees.  Disappointingly, my heated grips (which had been working perfectly in the morning) decided not to go for a while but eventually worked intermittently through my soaking gloves.

At the Mangamire turn-off I seemed to lose Rodney (he was a couple of cars back and it was raining again) so unfortunately didn't see him for the rest of the ride.  I assume he got back ok and it'd be nice to catch him for another ride some day.

I was home by 4:20 and glad to be out of wet gear and in front of the fire.  A great day out on the Tenere again!

Posted by Andrew Thomson at 8:47 pm