Ok, so I've been home for a while and even back at work for a day so it's time to start my write-ups of our trip away to tackle the Dusty Butt - 1,400kms of gravel and offroad tracks over three days in the South Island.

There's photos and videos a plenty and even a sad wee tale, but that's for another post.  First up, we had to get there...

By now, you may have read all the posts on the bike farkles and prep but another cool thing about this ride is that we were part of a small group who actually had a support group to carry some of our gear during the DB.  The riders were:

And as you can tell by extrapolating (or perhaps exaggerating) the data above, WR250R's were the most popular bike on the Dusty Butt...

Our support crew were Chris's parents, Keith and Fiona who had flown out from France to have a holiday driving our stuff around the countryside and spoiling us with cold drinks and snacks at the end of the day.  They were outstanding and the nicest support crew you could hope for!

On the Tuesday before the event I dropped the dog off at her luxurious hotel and loaded up the ute with Mighty Mouse and all the stuff I needed and plenty that I did not before making my way down to Colin's for the night.

Once there, we spent a lovely time (probably nearly an hour) getting the bikes loaded in the rain...It took some doing as we had to pack out the front of the tray so that the bikes sat on the tail gate to stop it from bouncing around.  We got there in the end.

There was even room up front for our small selection of supplies.... 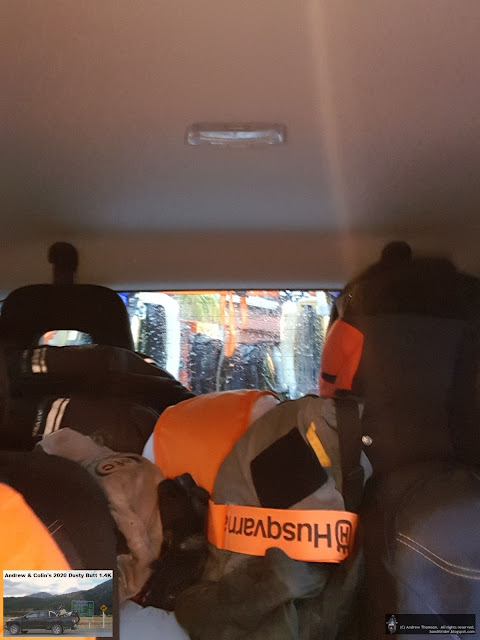 In the morning we needed to be at the ferry by 8am so were up early and just had the one stop on our way to the boat.

On the ferry we caught up with Chevvy who had secured our premium seats in the Plus lounge and settled in for the trip across the straights.

Smooth sailing over we started heading South.  The other guys were riding down and going to attack the Molesworth before spending the night in Hamner before making there way down to Fairlie on Thursday.  We had no real plans and plenty of time to get to Fairlie so we decided that the ute needed to check out the Molesworth as well...

Driving the ute across was a bit different than riding the S10 through but the air-conditioning sure works better in the ute.  We had a great drive across with the only issue being the bikes trying to escape (who could blame them) and us needing to doctor them.

Chevvy eventually caught us up too. 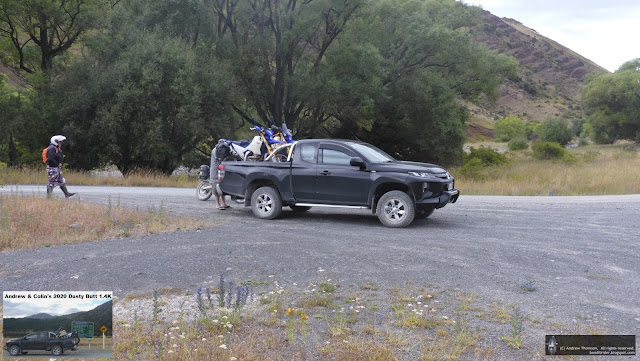 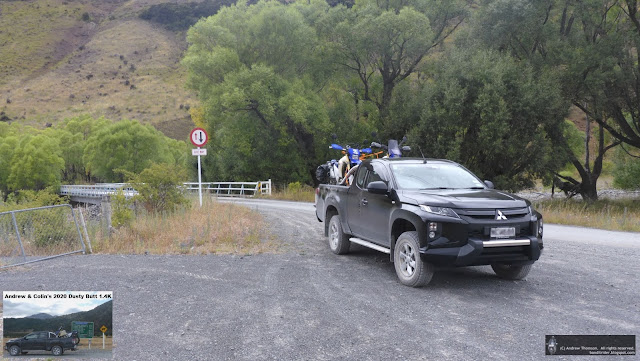 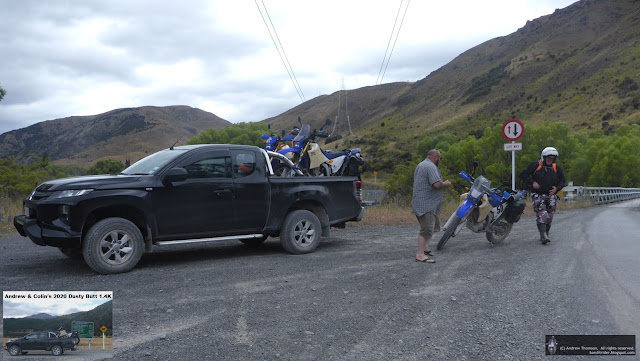 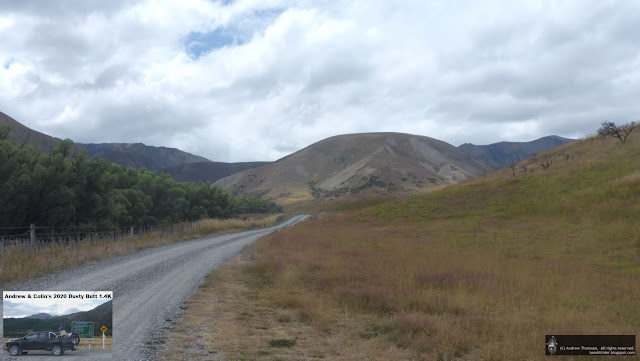 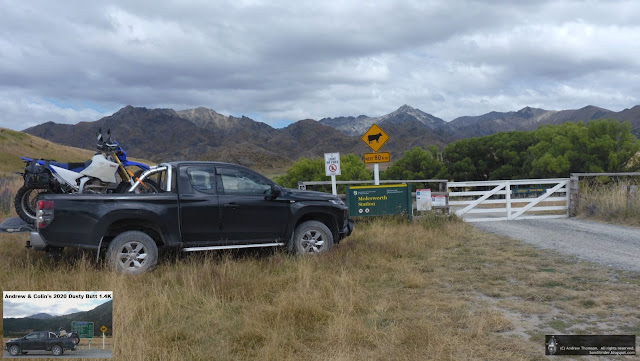 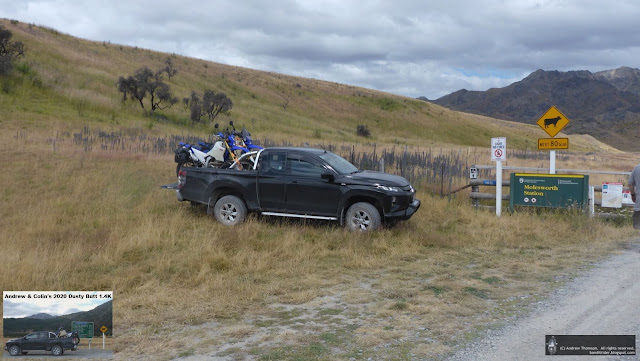 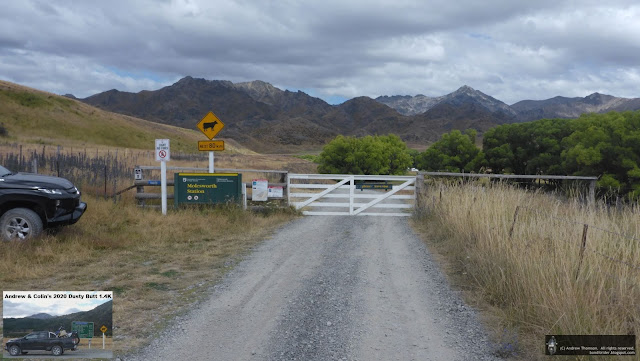 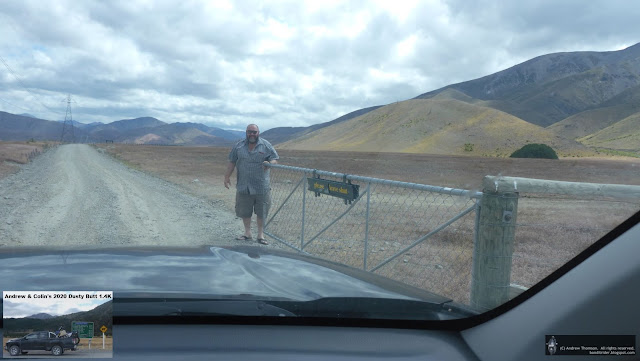 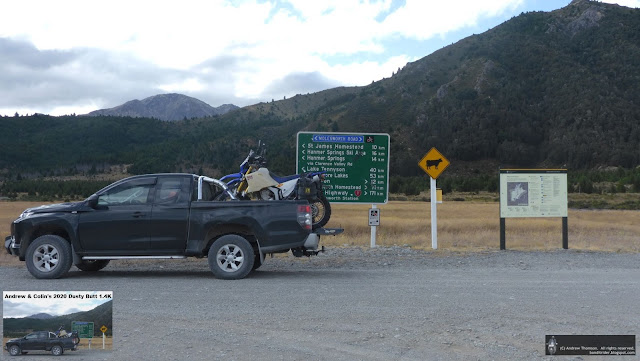 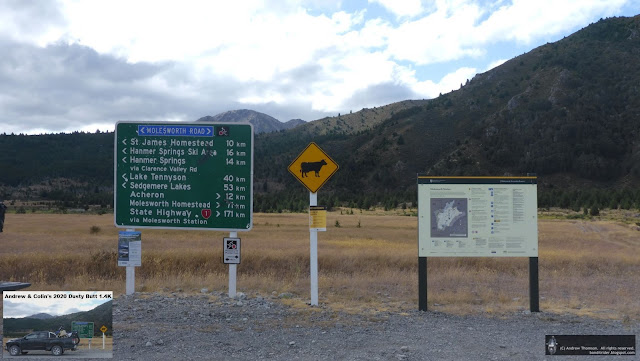 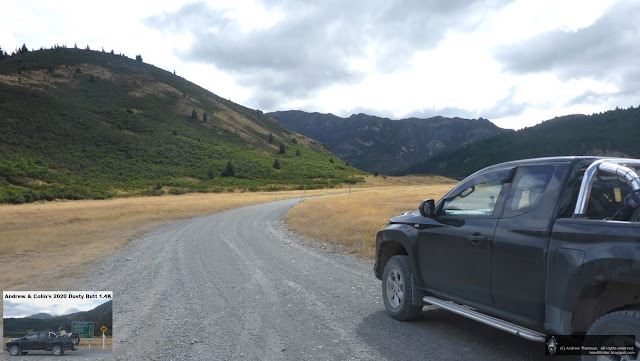 Dropping into Hamner we came across a bunch of bikes parked at the bottom and were surprised to see that we had caught up with Karen, Chris, Jeff (this spelling is easier for me) and Rowan.  Winding down the window we discovered that they had a KTM that didn't want to behave.

We spent a few minute attempting to diagnose the problem while Karen went to get some fuel in case that was the issue.  Not really finding anything we pushed it up the hill a bit, poured some fuel in it and then attempted to crash start it - this is where my jandals (the fastest in the Southern Hemisphere at least) came in handy and the bike fired up on the second try while I pushed the limits of jandal traction to the max and narrowly avoided the first serious injuries of the trip.  It was spectacular...

Leaving that lot in Hamner, Colin and I carried onto Amberley where an air-conditioned motel and pub dinner awaited.  Nice secure parking too... 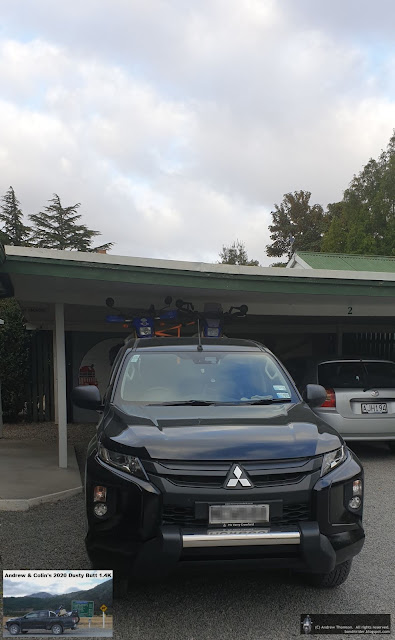 Next morning we got on the road again and quietly wandered down to Geraldine where coffee and a snack was required before the short trip over the hill into Fairlie.

In Fairlie, we parked up outside Colin's favourite shop and chatted with a few other DB riders who were inhaling pastry.

Then it was time to find our accommodation and as we were the first to arrive we got the room with 2 double beds - suffer in ya jacks Chevvy and Jeff...

Bikes unloaded and ute stashed for the weekend, we kicked back to await the others.  We even had time to go grab some supplies that made their eyes light up on arrival.


Next on the agenda was to sign on at the pub and have a meal (part of our entry fee) before the riders briefing.  The big takeaways were: follow the GPS tracks, shut gates and you're on ya own!

And that was it!  All the boring stuff done, now for a wee sleep before the action begun in earnest...we hit the hay to the sound of the roaring wind and forecasts of 140km/h in places...
Posted by Andrew Thomson at 7:09 am