Righto, so today the Connie was dropped into the shop for some new shoes and of course I then had to beg a ride so I could get back to work.  Unluckily for me they had no trouble finding a bike for me so I did have to go back to work - but that's another story...

This time around I was given another cruiser in the form of a Honda VT750C Shadow.

Now right from the start I'll have to admit that the little shadow was probably never going to light my fire (sorry Brenda) but if you take a look at the comparison between the Shadow and what I climbed off then you may notice the odd difference in spec and realise that it had a lot to live up to:

So in terms of performance it's not really a fair contest.  Riding the beastie I was a little surprised that it had to be revved a bit to get going (the clutch needs some adjustment as it only took up in the last few mm of travel) but once rolling she was very relaxed as I trundled through town in 3rd gear with the motor probably only pulling around 2,000rpm - perhaps less.  I didn't take the bike out of town but I'd guess that it would also be happier puttering along quietly in top gear for hours on end and that your license would  remain fairly safe.  Otherwise the motor was pretty much silent, although when you gave it a bit there was some muffled V-twin type noises (and vibes) a happening - different pipes would add a bit more character!

Comfort-wise the shadow was a typical cruiser with a feet forward riding position and what felt like a very comfy seat.  The ergonomics that come with the riding position were actually quite good - I did not have to go searching to find anything like I did on the M109.  But the riding position kinda had me leaning back a bit (where I'm normally used to a more upright or slightly forward lean) and I think that after a while that might be a bit hard on my back.

The brakes were a little wooden feeling and you needed to give both a decent dab to brake rapidly - certainly no danger of being thrown over the handlebars.  Engine braking was pretty good though.  Handling was definitely in the lazy cruiser league and the ride was pretty soft overall.  Moderately spirited riding would probably have the bike leaving bits of shiny stuff on the road. 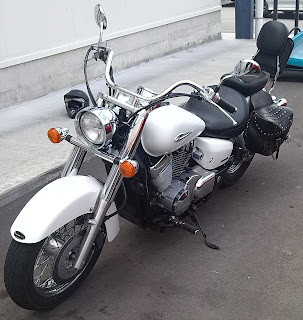 While I may be being a bit hard on the bike I would say that it is probably the ideal "beginners cruiser" as it does most things pretty well and is unlikely to get anyone into too much trouble.  It's a Honda too so it's bound to keep humming along happily for ever in a day without costing the owner too much in R&M.

Anyway, while the Shadow is not my cup of tea, I still enjoyed my little ride (I love getting to ride a variety of bikes) and wonder what I'll end up on next time...

Posted by Andrew Thomson at 8:36 pm

Email ThisBlogThis!Share to TwitterShare to FacebookShare to Pinterest
Labels: Reviews