After 9,500km the rear Heindenau K60 is coming off the DL and going in the bin.  Here's what it looked like when new:

I bought the Heinies because I'd heard that for quite aggressive tyres they were supposed to wear very well.  When I first put them on I took things a bit easy on them wanting them to last but after a while I decided to just ride them like any other tyre.  This meant hammering them whether on tarmac or gravel.

On road they've felt pretty good, on my first ride it was wet and they slithered around a bit until they got buffed up a bit and then they were fine.  On gravel they have been great except when in very deep stuff (with the centre ridge they tend to not sink in to give decent bite) and it takes a bit of a handful to get the rear sliding.  On one trip across North Range Road it was quite wet and the tyres handles the clay/mud in the big puddles up there pretty well - the rider was a bit nervous though...
Looking at the wear on the tyre you can kinda tell that a 1,000cc V-twin does a bit of damage - most of the wear is in the centre of the tyre and even though the tyre has been to the edge there is still plenty of meat on the sides. 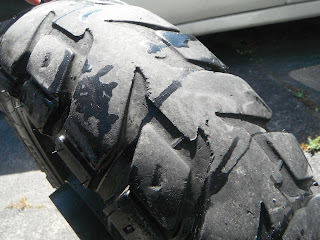 Overall I'm reasonably happy with how the Heiny has gone (and the front is still going strong) as I have been hard on it but one negative is the cost.  I could get a PR2 for the Connie for the same money or less and get more km out it - the PR2 would probably not have been so good in the gravel though eh?

So the wheel is off and hopefully the guys at the shop are getting stuck into putting the new hoop on.

This time around I'm having another experiment - I'm trying a Mitas E-07.  Neil runs these on his Tiger and likes 'em so I thought they were worth a try.  I have a sneaking suspicion that the compound is not as hard as the Heiny but they are considerably cheaper than the Heinies. 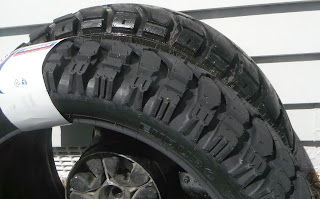 Might get the chance to give them a test tomorrow...

Here's Neil giving his thoughts on the E-07's: